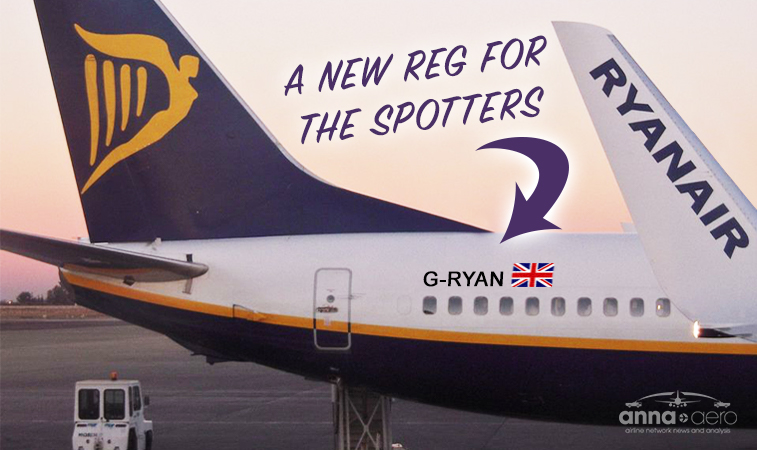 G-RYAN. Will this be the registration of Ryanair’s first aircraft on the UK register following its application pre-Christmas to the UK CAA for a British AOC? 76% of the Irish ULCC’s flights from its 19 UK airports are to destinations in the EU, all of which could be in jeopardy should a hard Brexit transpire and Ryanair not become a defacto UK carrier. It is unclear whether MOL would be required to relocate aircraft or employees to the UK in order to persuade the watchdog to grant the paperwork. You can almost hear him choking on his Christmas turkey at the thought of having to do as he is told on that one.

On 21 December, the UK CAA received a letter (probably an e-mail) from Ryanair, as the Irish airline seeks an AOC from the British regulators to safeguard its existing and future UK-originating operations against a hard Brexit amid little progress on a new aviation deal between the UK and Europe. The carrier’s move for a UK AOC follows a similar one by fellow ULCC Wizz Air in October, and of course the reverse situation for easyJet (a UK airline requiring an EU-based AOC) after it obtained an Austrian AOC earlier in 2017 for its Vienna-headquartered operation. According to ch-aviation’s fleet database, easyJet Europe as it is known, already has 27 aircraft on its books (four A319s and 23 A320s).

While Ryanair confirmed to UK media that it had applied for an AOC, an airline spokesperson suggested that its application “may be required for Ryanair’s three UK domestic routes in the event of a hard Brexit in March 2019.” But the reality of the impact on the airline’s UK operations post-Brexit is much bigger than that, and it is something that the ULCC’s boss warned of last summer. “There is a real prospect, and we need to deal with this [presumably by getting a UK AOC], that there are going to be no flights between the UK and Europe for a period of weeks, months beyond March 2019,” MOL told the European Parliament’s Transport and Tourism Committee in July 2017.

Ryanair’s reason for gaining a UK AOC is to maintain the ‘freedoms of the air’ which it currently enjoys to/from the UK, the airline’s second biggest country market (after Italy and just ahead of Spain) with over 25 million seats in 2017, according to OAG schedule data. So its back to school now, as we try to understand which of the nine freedoms will be impacted by a hard Brexit. The two most important for Ryanair’s current UK operations are as follows:

Looking at Ryanair’s existing UK operations in 2017, it had flights into 19 airports across the country. The graph below breaks down these airports in terms of the share that each of the EU, UK, Irish and other countries outside of the EU markets command of their respective annual flights. Nearly three quarters of the airline’s 19 UK airports have two thirds or more of their respective Ryanair flights in 2017 to the EU, which are therefore under threat following the expected removal of the Irish airline’s seventh freedom rights. Indeed 76% of the ULCC’s flights last year from the UK were to the remaining 27 EU nations. It should also be noted that while London Stansted might be the seventh most impacted in terms of the removal of Ryanair’s seventh freedom rights, the number of flights operated from the airport constituted around 45% of total flights across the UK, so the potential impact on 84% of its flights is therefore vast. 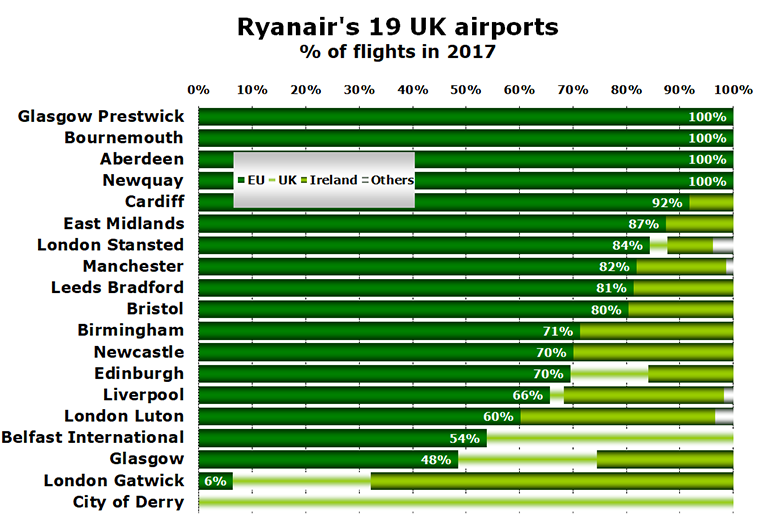 While the impact to EU destinations is the most significant for the majority of Ryanair’s UK airports, there are other airports where the removal of ninth freedom rights will have a more noticeable effect. For example, the carrier’s flights from City of Derry are entirely to other UK airports. At Belfast International, Ryanair’s 12th largest UK operation last year, the airline’s operations are split almost 50/50 between EU and domestic destinations. In 2017, Ryanair operated to just four ‘other countries’ – namely Norway, Switzerland, Morocco and Montenegro. These represented just 2.0% of the airline’s flights last year.

UK-Spain schedule is most at risk

Only one of Ryanair’s 19 UK airports does not have flights to Spain (City of Derry), making it by far the most popular EU destination for the airline. Not far behind is Portugal, which was served from 17 of the 19 airports, with Poland (14 from 19), Ireland (13 from 19) and Italy (11 from 19) completing the top five country markets. Spain was also #1 in terms of the number flights operated last year, with the Iberian country commanding nearly 33,500 Ryanair flights (25% of the total) from the UK in 2017. 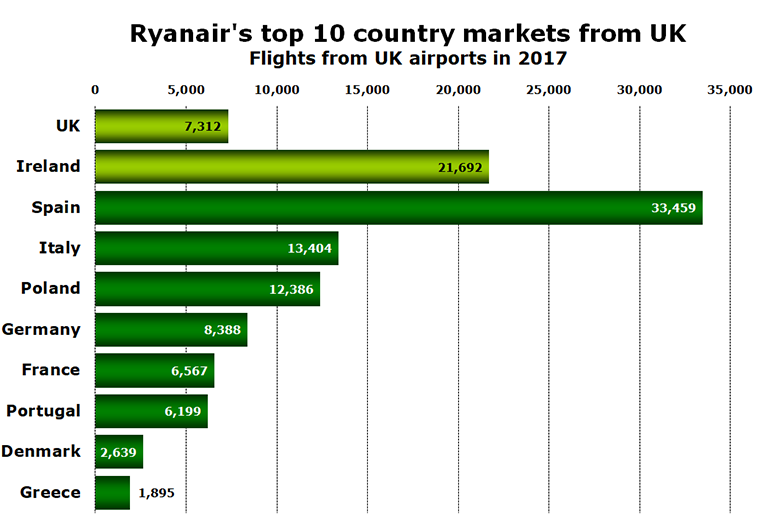 The UK domestic and Irish markets (highlighted in light green) are both sizeable for Ryanair, but as suggested above, access to the former – using the ninth freedom of the air – would be lost post-Brexit, unless the UK achieved retention of the EU single aviation market agreement (like the Norway-EU agreement) or if it was returned following a successful AOC application. Without the UK-EU deal, come March 2019, the Irish market would be subject to a separate UK bilateral agreement with Dublin, and therefore its outcome remains unclear. Based on last year’s operations, Ryanair’s UK-Irish services were a significant 16% of flights.

Who else will be impacted by Brexit?

Ryanair’s move to gain a UK AOC came just weeks after Wizz Air had requested the same piece of paperwork from the UK CAA. The Hungarian-based ULCC operated around 20,000 flights last year to nine UK airports, with around 80% to London Luton. On this scale, its total programme is about 15% the size of Ryanair’s British operations, but still significant. 95% of Wizz Air’s UK flying is to an EU country, so it is easy to understand why it has made the move to attain a UK AOC. Norwegian may also need to rely on its UK AOC, obtained in 2015. On a smaller scale, carriers like Romania’s Blue Air, which flew from four UK airports in 2017 – Luton, Liverpool, Birmingham and Glasgow – may also need a UK AOC post-Brexit, particularly at Liverpool where it opened a base in March last year. Nearly one third of its flights in 2017 would fall foul of the removal of its existing seventh freedom rights.

What the UK’s regional airports think…

“UK regional airports need assurances that UK-EU seventh freedom, and UK domestic ninth freedom air services will continue throughout 2019 and beyond,” states Neil Pakey, Chairman of the UK Regional and Business Airports’ Group (RABA). “People forget how hard our regional airports lobbied for a single aviation market in the first place because we needed European airlines to connect our regions to European cities and also to other UK cities. We live in hope that the single aviation market will continue for the UK, much in the way it does between the EU and Norway, as this is the best way to safeguard existing UK connections.  Aviation is not covered by any world trade agreement, and the alternative of negotiating 27 separate UK bilateral agreements with each EU member state would be a bureaucratic nightmare, both for the UK and for the EU member states. The EU member states equally have tourists and business travellers who need access to UK regions. We just need both sides to see sense, like now.’ In 2017, the UK was Ryanair’s second biggest country market (after Italy and just ahead of Spain) with over 25 million seats, according to OAG schedule data. With the potential loss of seventh and ninth freedoms of the air, the ULCC’s network would be significantly reduced, limited to Ireland-UK operations. Hopefully both the UK and EU negotiators will see sense to ensure this situation doesn’t happen.