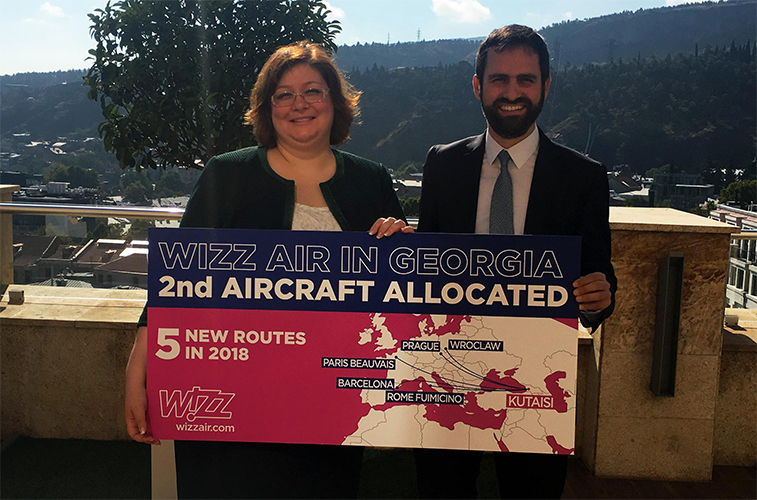 Wizz Air announced back in October that from the start of S18 it would base a second A320 in Kutaisi. Seen showing this news are Kate Aleksidze, CEO of United Airports of Georgia, and George Michalopoulos, CCO of Wizz Air. The aircraft will allow the carrier to open new routes to Wroclaw, Prague, Paris Beauvais, Barcelona and Rome Fiumicino. Kutaisi Airport handled over 405,000 passengers in 2017, an increase of 49% when compared to the total it welcomed in 2016.

Located on the eastern edge of Eastern Europe, Georgia, the host country of CONNECT 2018, is a nation that is on the move, and this is clearly evident with the increase in passenger numbers through its three leading airports – Tbilisi, Batumi and Kutaisi – all of which are seeing phenomenal changes due to the nation’s growing relations with the EU and other European countries. anna.aero recently conducted an analysis of European markets from Georgia with regards to visitor numbers, and the results showed that between 1 January and 30 September 2017, a total of 263,600 EU citizens visited Georgia, up 25% when compared to the same period of 2016. This does not take into account the growing number of visitors to Georgia from European nations that are not part of the EU. Among the nations to show increased visitation to Georgia during that time period analysed included Germany, the UK, Netherlands, Spain and Austria, all of which saw their visitor numbers to the nation increase by over 30% during the first nine months of 2017.

2017 was a fantastic year for Georgia’s three leading airports, with the trio handling over 4.06 million passengers, an impressive 43% increase in traffic when compared to the 2.84 million they greeted in 2016. The growth rate encountered last year is the best that Georgia’s airports have recorded since the turn of the decade. Batumi saw the biggest growth, with traffic up by 59% in 2017, followed by Kutaisi which witnessed passenger numbers increase by 49%, and then Tbilisi, up by 40%. It should be noted that 2017 was the first year to see Georgia’s airports handle more passengers than the overall population size of Georgia, a total which currently stands at 3.72 million according to UN statistics. 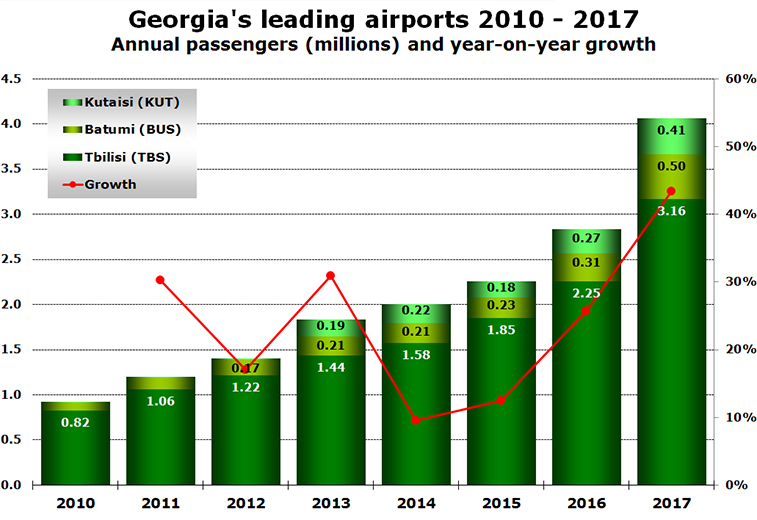 In terms of growth over recent years, the most noticeable airport in Georgia is Kutaisi, a facility which reopened in 2012 after renovation. It then processed 187,939 people in 2013, its first full year of operation following its reopening. Last year it greeted 405,173 passengers, meaning that in the past four years the airport’s annual passenger throughput has increased by 116%, resulting in an average annual increase of 29%.

Last year seat capacity to Eastern Europe from Georgia increased by 32%, with one-way seats passing the one million mark for the first time. Western Europe also encountered double-digit growth last year, with its offering up 22% to over 600,000 one-way seats. When combining the two data sets, it shows that seat capacity between Georgia and Europe passed 1.78 million one-way seats in 2017, up 28% from 1.40 million in 2016, the best year for growth during the time frame analysed. 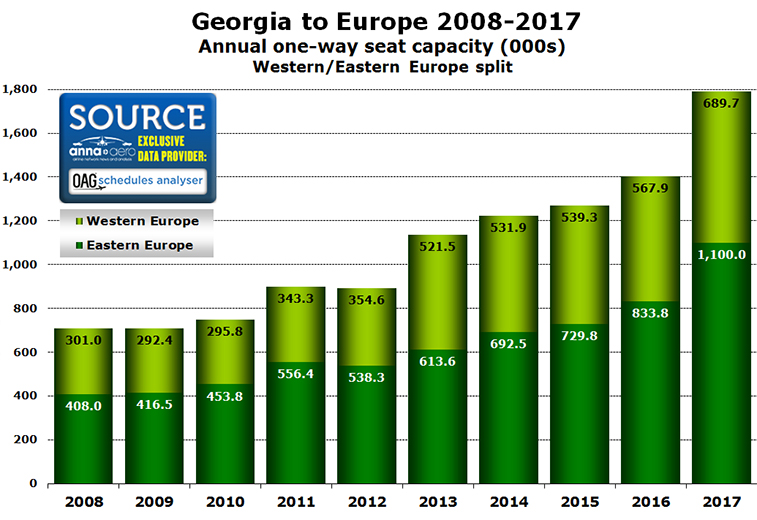 One of the major advantages for Georgia in recent years is that it has started visa-free travel for citizens of EU nations, which has allowed the country’s visitor numbers to boom in the past few years. With regards to EU connections, Kutaisi and Tbilisi are showing to be equal in terms of links to EU airports for the summer season, with both having 11 routes each when referring to OAG schedules for August last year. However for the winter season Kutaisi has more EU links than Tbilisi, with data for January showing that it has routes to 10 EU airports, while Tbilisi has just eight. Despite Kutaisi currently being the third busiest airport in terms of passenger numbers in Georgia, for European connections it leads the way to Italy, the UK and Hungary, with it also having a large share of seats to Germany (49% of one-way seats in 2017), Poland (42%) and Greece (33%). 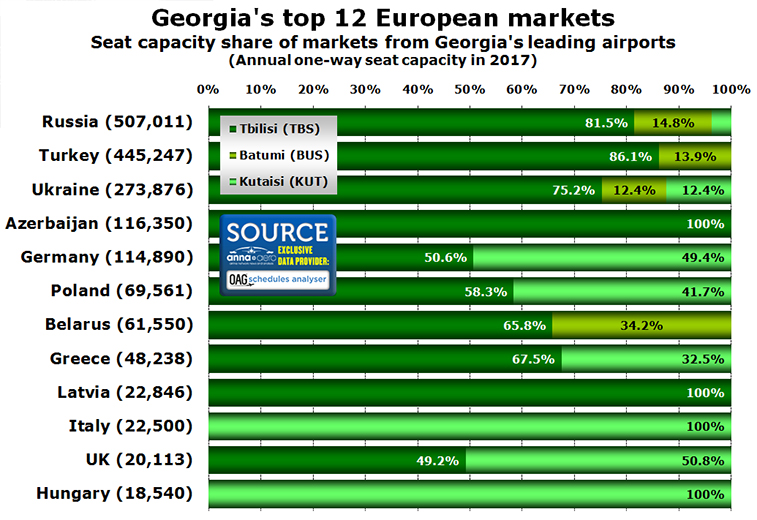 Along with the 12 European nations in the graph above, Georgia is also connected to Armenia, Lithuania, Cyprus, the Netherlands, Austria and the Czech Republic with regular services in 2017.

16 European services scheduled for launch in 2018

Georgia, as of January, is scheduled to welcome 16 new European connections in 2018 (one not to an EU airport – Kazan), eight each from Tbilisi and Kutaisi. These services also include sectors to Spain and Slovakia, unserved country markets from Georgia last year. A breakdown of the routes can be seen in the table below. Along with these European services, only one other route is planned from Georgia in 2018, with this being a key link for Kutaisi, with it welcoming flydubai from its hub in June.

As can be seen from the new routes being planned from Georgia, they are all with based carriers Georgia Airways and Wizz Air. With their growing presences, it would appear that now is the optimum time for more airlines to enter this growing market before both gain unassailable market shares. It appears however that the success being observed in Georgia is not going unnoticed, with Blue Air, one of Europe’s fastest-growing airlines, operating two flights to Tbilisi from Bucharest on 3 and 10 of February. While these flights are not part of the regular programme, they are bookable on the carrier’s website. Perhaps testing the market for a more regular service? 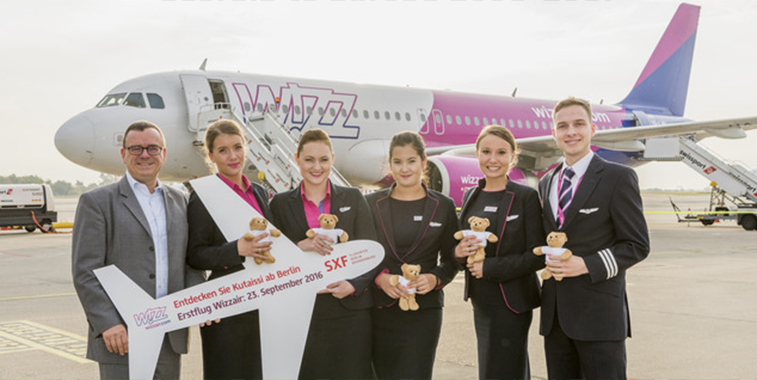 Wizz Air launched flights between Kutiasi and Berlin Schönefeld on 23 September 2016, an airport which will gain a link to Tbilisi in 2018 thanks to Georgia Airways. German visitor numbers to Georgia increased by over 30% between January and September 2017, with the country also being the leading EU nation from Georgia, with over 114,000 one-way seats being offered last year. Along with Schönefeld, Cologne Bonn will also welcome Georgian Airways in 2018.