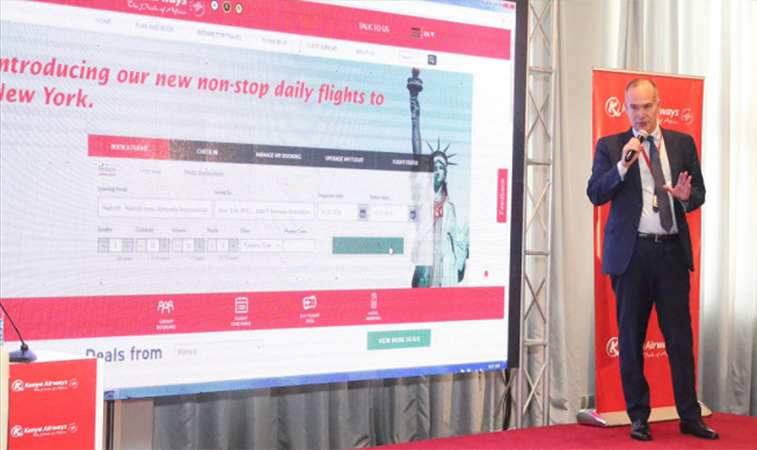 Seen announcing that Kenya Airways will begin flights to New York JFK from Nairobi on 28 October is the airline’s CCO Vincent Coste. The service will become the only non-stop offering between East Africa and the Big Apple, with Ethiopian Airlines’ New York Newark route currently operating via Lome. Kenya Airways’ last route launch was on 5 May 2017 to Victoria Falls, an airport which the carrier connects to from Nairobi, offering an onward link to Cape Town.

It would appear that Kenya Airways is in an improving state at the moment. While for the last financial year (FY16/17) it posted an 8.5% reduction in turnover to 106,277,000,000 KES (€855 million), its operating profit increased by an impressive 122% according to the airline’s last annual report, with it moving into the black by producing a 897,000,000 KES profit (€7.2 million – €32.9 million loss in FY15/16). These positive financial indicators hopefully mean that it is in a more stable position to take on the risks associated with new route decisions. Currently the airline has a fleet of 32 passenger aircraft when referencing ch-aviation, with this total being made-up of: two 737-700s; eight 737-800s; seven 787-8s; and 15 E190s. The airline also has two 737-300s for freighter services, meaning in total there is currently 34 aircraft in its fleet, with the average age of the units being 6.4 years.

In FY16/17 Kenya Airways carried 4.46 million passengers, an increase of 5.4% when compared to its total for FY15/16. In the same period, the airline increased its average load factor across its network from just above 68% to 72%, the first time that the carrier has passed the 70% threshold since FY11/12, with last year’s result being the best that the airline has recorded since FY07/08 when it achieved a load factor of just under 74%. 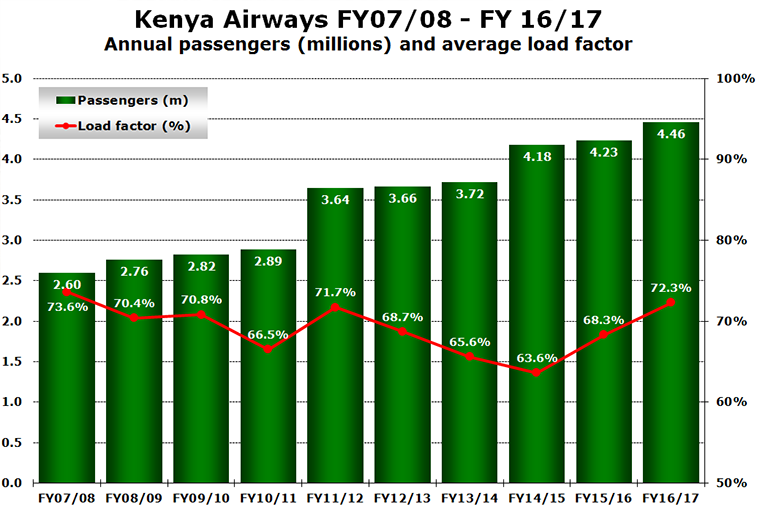 While the distance between Nairobi and Mombasa by road is around 480 kilometres, the time it takes to drive the route can still take up to nine hours, meaning that flying is the most viable option for travel between Kenya’s two largest cities. It is therefore of no surprise that the Mombasa route is the #1 for the nation’s flag carrier from the capital, with Kenya Airways offering between eight and nine daily flights on the city pair. While it is the number one route, the link has saw annual seat capacity reduced by close to 14% between 2016 and 2017, the worst performance recorded of the airline’s top services from the capital. One factor for Kenya Airways choosing to reduce its frequency on the route from around nine to 10 daily flights is due to the increased competition on the sector, particularly with the arrival of LCC Jambojet, a subsidiary of Kenya Airways, with it offering up to six daily flights. Along with Mombasa, the domestic link to Kisumu (fifth largest route) has also seen a capacity drop, along with Bangkok Suvarnabhumi (all highlighted in red). 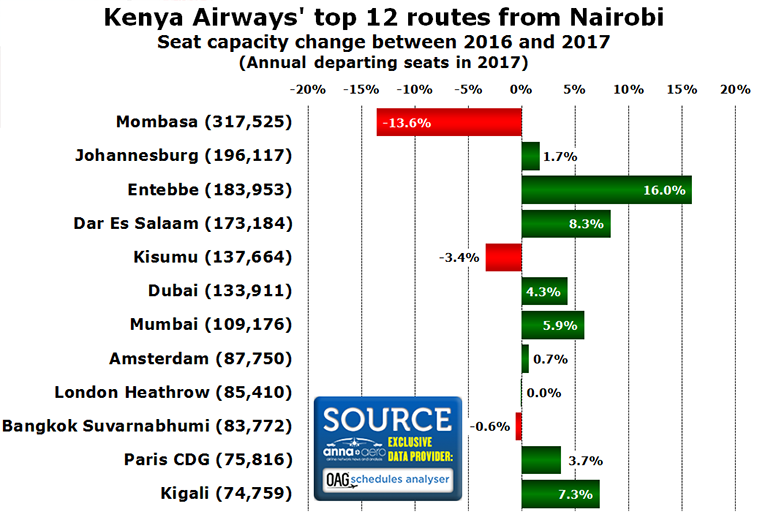 Of the routes in the top 12, three are the airline’s long-haul connections to Europe, namely Amsterdam, London Heathrow and Paris CDG, with two being domestic, two in Asia and one in the Middle East, and remaining four being in other African countries. While the airline did add Victoria Falls to its network in 2017, the carrier has cut service to three airports since the beginning of 2016, namely Malindi (ended 7 August 2016), Gaborone and Abuja (both 13 November 2016). The carrier’s next route launch from Nairobi is to New York JFK in October, a route it will operate daily on 787-8s, with this inauguration date being 18 months after the airline’s first flight to Victoria Falls.

When referring to OAG Traffic Analyser data, in 2017 there was around 23,800 indirect passengers between Nairobi and JFK, with a US/African traffic origin split of 52/48, showing that there is more demand for the route from the US end of the city pair. The top three hubs for connecting traffic between the two airports last year were Dubai (34% of traffic – all on Emirates), London Heathrow (16% – majority on British Airways) and Doha (13% – all Qatar Airways). So with two of the three top airlines serving indirect passengers being oneworld members, this is certainly an interesting move by the SkyTeam carrier which will surly be aiming to capture that demand. Interestingly Amsterdam, a SkyTeam hub for KLM, which has a Kenya Airways service from Nairobi, was fourth in the rankings for JFK-bound traffic in 2017 (9.7% – demand split between KLM and Delta Air Lines).

Leaving it too late to compete with Ethiopian?

Kenya Airways, a SkyTeam member, has a well established hub at Nairobi, with it surely hoping to fill some capacity on its JFK service with feeder traffic. Another airline which is not too far away geographically, which also has a strong based operation in East Africa, is Ethiopian Airlines (Star Alliance), a carrier with already well established services into the US including New York (Newark), along with a strong, global non-African route network. In FY07/08, Ethiopian Airlines transported just over 2.50 million passengers, 100,000 less than Kenya Airways during that financial period. In FY15/16, when Kenya Airways flew 4.23 million people, Ethiopian Airlines greeted just over 7.50 million, 3.3 million more than the Nairobi-based operator, showing that the Star Alliance member has been more ambitious with its growth in recent years.

Back in 2007, Kenya Airways offered just under 540,000 departing seats on non-African routes from Nairobi, with Ethiopian Airlines’ non-African network supporting 760,000 seats, around 41% more than its East African neighbour. In 2017, the Addis Ababa-based carrier was offering 2.55 million one-way seats to points outside of its home continent, a whopping 311% larger than that being flown by Kenya Airways, with it only providing 620,000 seats. 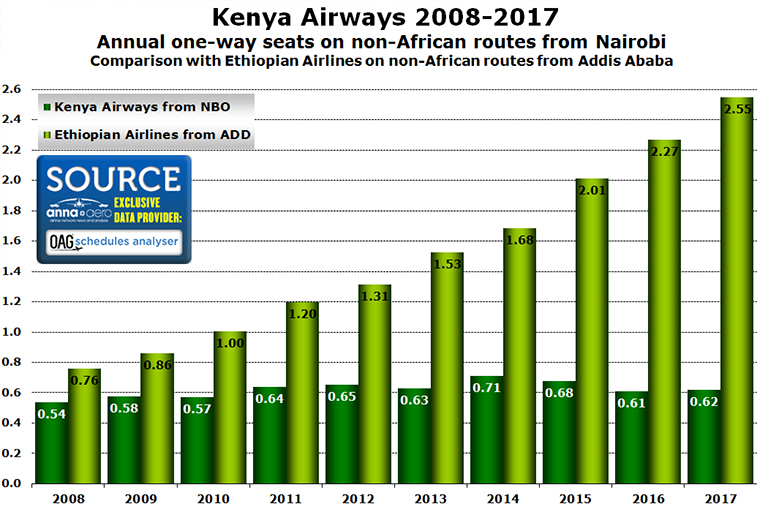 Outside of Africa, Kenya Airways will be operating to eight airports in 2018, namely Amsterdam, Bangkok Suvarnabhumi, Dubai, Jeddah, Heathrow, Mumbai, New York JFK and Paris CDG. In terms of the airline’s turnover, it intercontinental routes accounted for 48% of the money taken by the carrier in FY16/17 according to the airline’s financial report, down from 49% in FY15/16. The only one of these city pairs that Ethiopian Airlines does not serve from Addis Ababa is Amsterdam, and while the Star Alliance carrier does serve Newark, the route is via Lomé in Togo, meaning Kenya Airways will be the only carrier offering non-stop services to the Big Apple from East Africa in 2018. 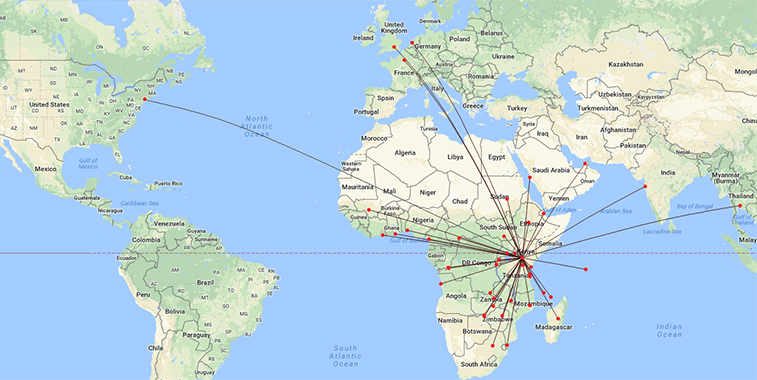 Kenya Airways has now entered the ultra-long-haul market with the announcement of flights to New York JFK from 28 October 2018. In FY16/17 Kenya Airways transported 4.46 million passengers with an average load factor across its network of above 72%. The number of people flown by the airline has increased by 71% since FY07/08.