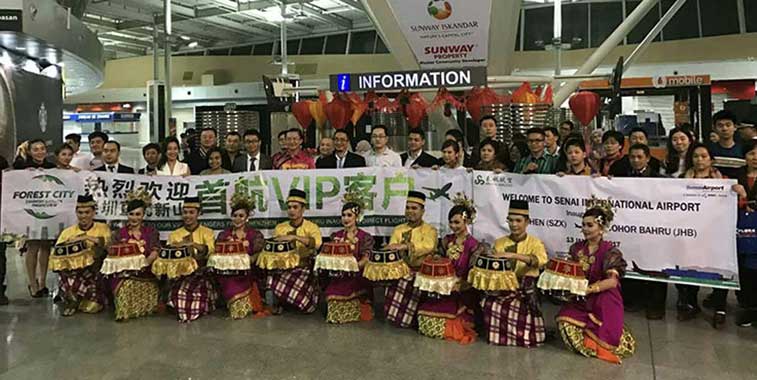 Spring Airlines has enjoyed rapid growth over the past 10 years including a doubling in its capacity since 2012. anna.aero’s New Routes Database records that the carrier launched 14 new routes in 2017. All but one of these sectors served new international links, including this one from Shenzhen to Johor Bahru in Malaysia, which launched last January.

Spring Airlines is a Chinese carrier that was formed in 2005 and, according to ch-aviation, it currently operates a fleet of 76 A320s. The LCC has a Japanese subsidiary, Spring Airlines Japan, which was launched in 2012 and operates a smaller fleet of five 737-800s. Since the two carriers operate under separate IATA codes, anna.aero has decided to focus its attention on the main Chinese operation.

A decade of growth

The Spring Airlines story has been one of continual growth. In 2008 only 1.17 million two-way seats were available across the carrier’s network, and all of those were on domestic services. By 2011, the LCC had increased its total capacity to more than 7.54 million seats, including 250,000 on international services which were introduced that year. Since 2011, the airline’s year-on-year capacity growth has reached double-digits in every year except 2016. From 2012 to 2017 the number of seats available on Spring Airlines flights more than doubled from 9.23 million to 18.53 million. 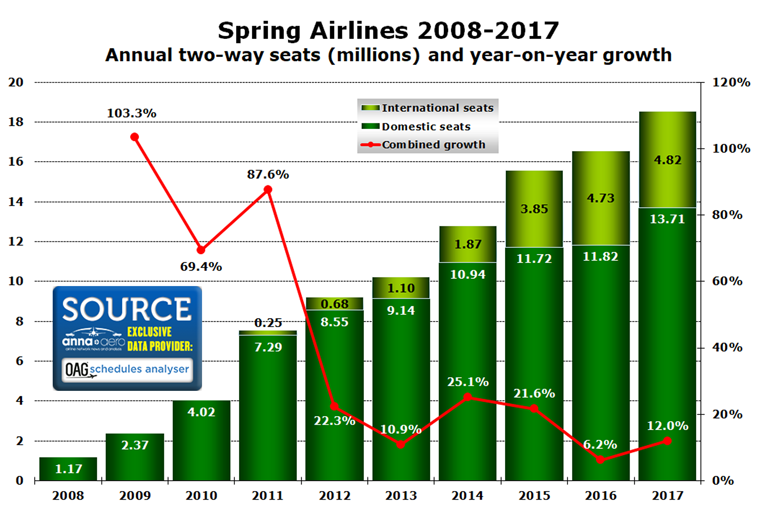 From 2008 to 2010 all of Spring Airlines’ routes were domestic. In 2011 it introduced international destinations to it network but these only accounted for about 3.4% of its total available seats during that year. From 2011 to 2017 the Chinese LCC increased its domestic capacity from 7.29 million to 13.71 million seats, while its international capacity increased from 250,000 to 4.82 million seats. By 2016, international services had increased to the extent that they represented 28.6% of the seats available across the airline’s network. This fell back to 26% in 2017 after the airline only grew international capacity by 2% last year, while domestic seat numbers rose by 16%.

Spring has sprung from Shanghai

Shanghai Pudong and Shanghai Hongqiao are the largest airports in the Spring Airlines network, accounting for more than one quarter of its departing seats in 2017. The network from Pudong consists of a near 50/50 split between international and domestic capacity but all of the carrier’s services from Hongqiao are domestic. Spring Airlines’ largest domestic route, based on available capacity in 2017, is Hongqiao to Shenzhen, which it served with nearly 325,000 one-way seats. OAG schedules show that the carrier will operate five daily services on this hotly contested airport pair during the week commencing 9 January. The airline’s three largest domestic routes all serve Hongqiao, while its top 12 serve one of the two Shanghai airports. 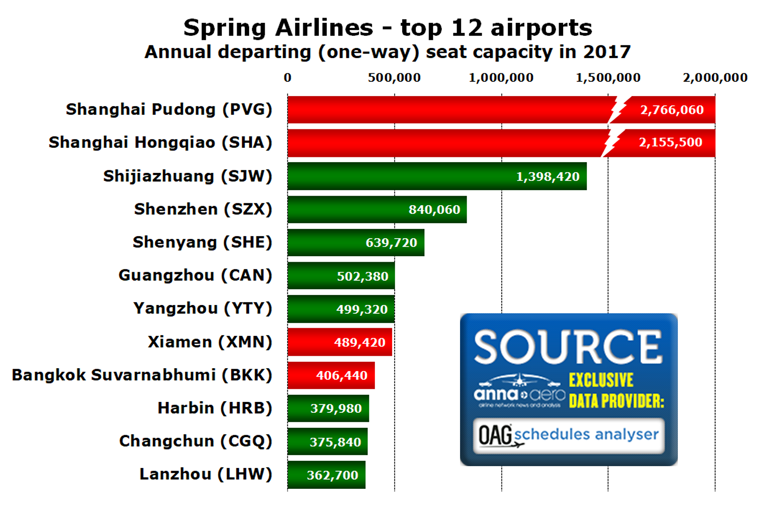 The airline’s focus on its home market is emphasised by the fact that 11 of its top 12 airports are in China. Bangkok Suvarnabhumi is the only international facility to make the top 12 in 2017, but it also experienced the largest capacity cuts amongst the top-ranked airports last year, with a 12% reduction in seats. The top 12 airports that witnessed the strongest growth in Spring Airlines’ seats from 2016 to 2017 were Yangzhou, which saw a 154% increase, and Changchun and Lanzhou which also enjoyed a doubling in the carrier’s departing capacity last year.

Spring Airlines’ growing international network is led by services to Thailand, its largest foreign destination market. Thailand accounted for about one-third of the airline’s international capacity in 2017, with Japan the second largest market. Pudong is the origin point for 11 of the carrier’s 12 largest international services, based on last year’s published capacity. The Guangzhou-Suvarnabhumi sector is the only top-ranked route that doesn’t originate from Shanghai’s main international gateway. Thailand also topped the table for most routes amongst the carrier’s 12 largest international services. There were four connections to Thailand in the top 12 in 2017, including the airline’s highest capacity service from Pudong-Suvarnabhumi. The other top 12 services included three links to Japan. 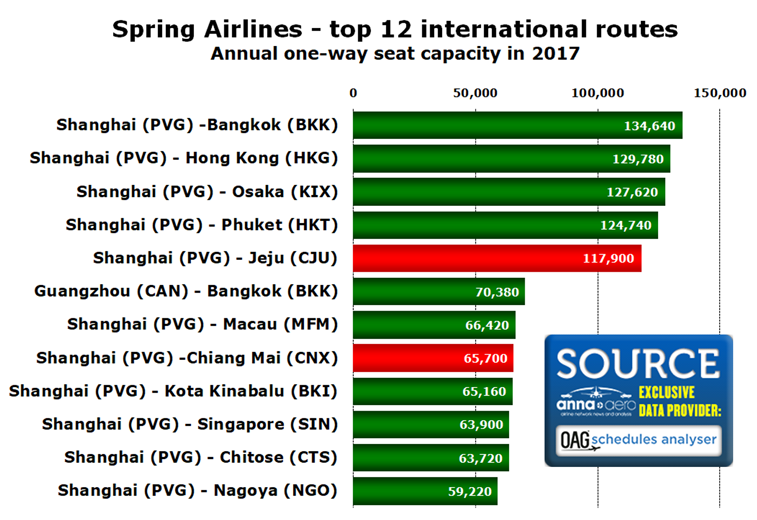 The highest-capacity international service that witnessed the biggest increase in seats from Spring Airlines in 2017 was Guangzhou-Suvarnabhumi. Capacity on this sector doubled from the previous year. Two of the top-ranked international routes (highlighted in red) experienced cuts in capacity in 2017. The largest reduction came on the Pudong-Jeju sector, with the South Korean service seeing a 9.7% cut in seats compared to the previous year. anna.aero’s New Routes database indicates that Spring Airlines launched 14 new routes in 2017, of which all but one were to international destinations. 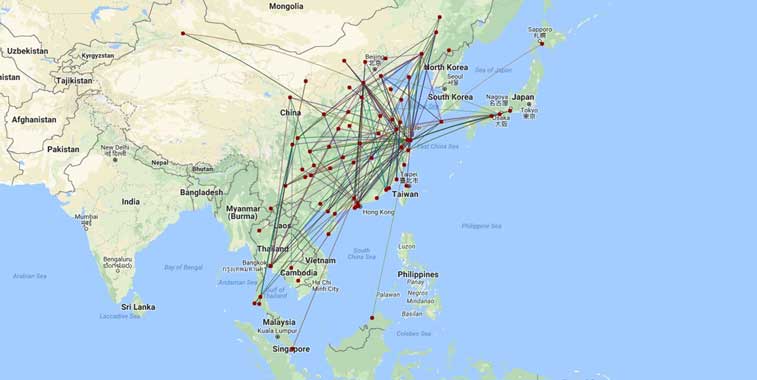 Spring Airlines’ route map for the week commencing 9 January emphasises the predominance of domestic connections in its network, but also reveals its growing international connections to neighbouring Asia Pacific countries. As recently as 2010, the airline did not operate any international services, but links to destinations outside of China now account for more than one-quarter of its two-way seats.