Argentinian traffic grew 72% between 2007 and 2016 to over 35 million passengers; set for low-cost expansion with Norwegian and Flybondi 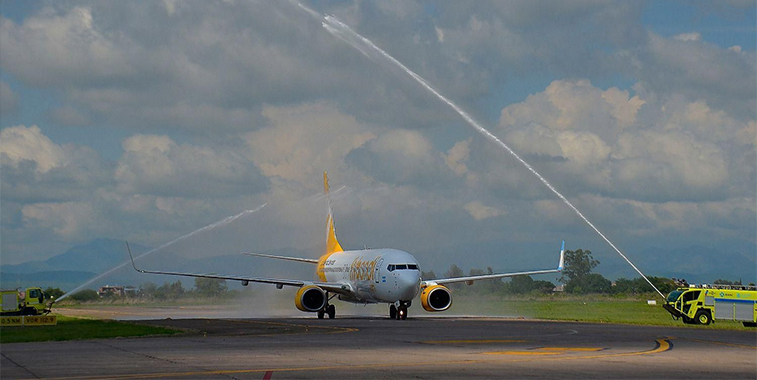 Say hello to Flybondi, Argentina’s new low-cost carrier. The market will be shaken up by the LCC sector this coming year, with Norwegian also setting up operations in Argentina. The result will no doubt push passenger numbers above the 35.03 million recorded in 2016, up 7.3% from the total of 32.65 million in 2015.

Argentina is set for aviation revolution in 2018 as the country sees the launch of operations from Flybondi, a brand-new home-based, low-cost operator (first for the country), while European LCC giant Norwegian is also planning to begin inter-South American services (more detail below). The two LCCs may have been inspired to try their hand in the Argentinian market given the growth in air traffic from the nation in recent years. Argentina’s annual traffic increased by 72% between 2007 and 2016. This translates to an average increase in annual traffic of 1.62 million passengers per year during the 10 year time-frame analysed.

During 2016, 35.03 million passengers passed through 54 airports in Argentina, according to statistics from the Regulatory Organism of the National Airport System (ORSNA). This marked a 7.3% improvement on the 32.65 million travellers handled by the same facilities in 2015. Despite the economic downturn between 2007 and 2010, Argentina’s airports have appear to have performed well during the past decade, with only 2011 seeing a downturn in traffic, with passenger numbers falling 1.5%. The best year for growth between 2007 and 2016 was 2010, when there was an 11% increase in passengers, the only year to see double-digit growth during the period analysed. In H1 2017, Argentina’s commercial airports handled 18.33 million passengers. 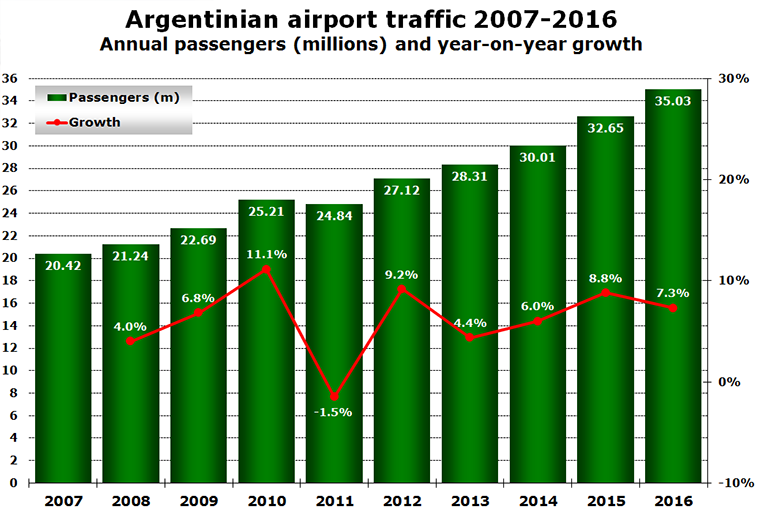 Argentina finally passed the 30 million passenger barrier in 2014, with the feat coming after a 6.0% increase in traffic over 2013. This comes after the nation passed the 20 million mark seven years previously in 2007. From 2007 to 2016, annual passenger numbers from Argentina increased by an impressive 72%. Of the 35.03 million passengers that flew from Argentina in 2016, 21.30 million travelled domestically, with the inter-Argentine market accounting for 61% of all traffic. The result is a 2.7% improvement from the 20.75 million domestic passengers recorded in 2015. However, the star market for growth in 2016 was the international sector, with passenger numbers increasing by 8.7% from 11.47 million to 12.46 million between 2015 and 2016.

Mendoza didn’t make the grade in 2016

Argentina’s top 12 airports were responsible for just under 90% of the nation’s traffic in 2016, the same market share that the group had in 2015. Argentina’s two leading airports are in the capital of Buenos Aires, Aeroparque and Ezeiza, with both seeing a growth rate of 7.7% in 2016. The duo handled 21.49 million combined passengers that year, representing 61% of Argentina’s total traffic. The total that Buenos Aires’ airports achieved in 2016 slightly exceeded the 21.24 million passengers that passed through all airports in Argentina during 2008. For H1 2017, the two Buenos Aires airports processed a combined 11.06 million passengers (Aeroparque 6.27 million and Ezeiza 4.79 million), with this representing 60% of all traffic from Argentina during the first half of last year, one percentage point below the combined market share they held for all traffic in 2016. 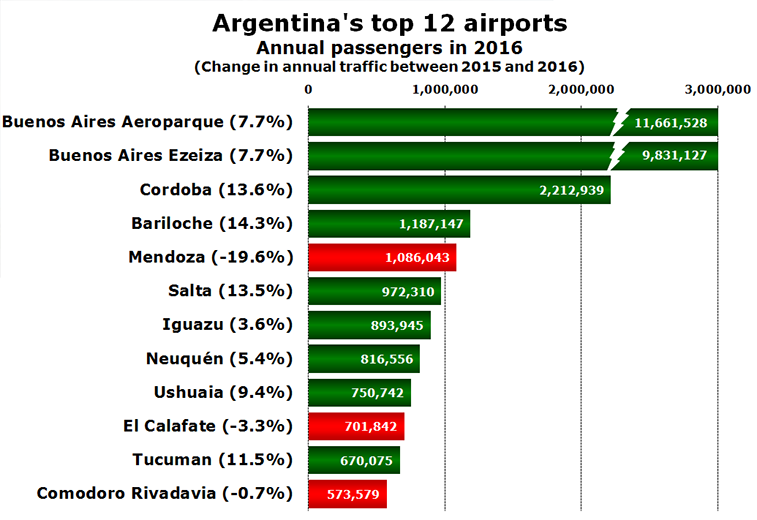 Of Argentina’s top 12 airports in 2016, three (highlighted in red) fell short of their 2015 totals, with the worst of the trio being Mendoza (fifth largest airport). It encountered a 20% drop in passengers during 2016, allowing Bariloche to overtake it to become the nation’s fourth largest facility. The reason for the drop was due to the airport being closed for runway renovations towards the end of 2016. There were 22 airports which welcomed over 100,000 passengers in 2016, with the fastest-growing of which was San Juan, an airport which saw traffic increase by 98% from 191,000 in 2015 to 379,300 in 2016.

LCC market returns to faster growth than other airlines

Argentina is a market that has not yet been fully explored by the low-cost concept. In-fact during 2017 the nation only had two serving LCCs, namely Sky Airline and GOL (both in OAG schedules as low-cost operators). Last year, LCCs accounted for 4.0% of departing seats from Argentina, up from a 3.3% market share in 2016. Thanks to the advanced growth of Sky Airline to Argentina in 2017, including the addition of Mendoza and Rosario to its network from Santiago, LCC capacity passed one million one-way seats from Argentina for the first time, with the total low-cost market growing by 37% from the country last year. Other airline capacity still accounts for a whopping 96% of seats, but major expansion in the LCC market is coming in 2018. 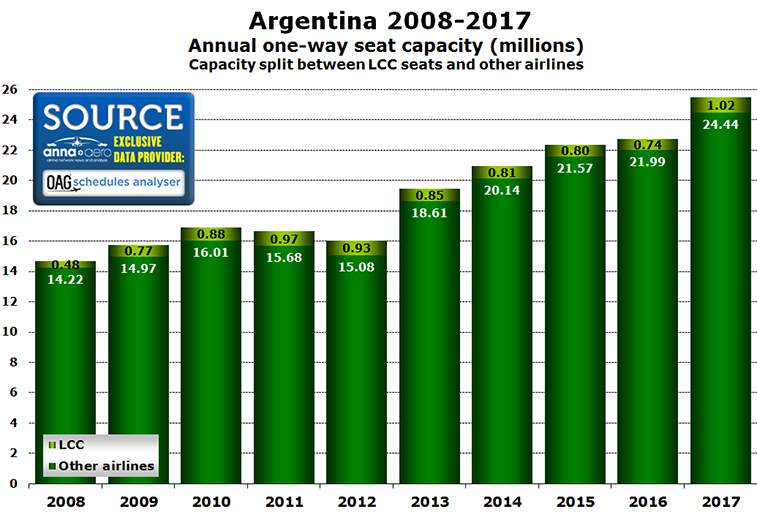 In a few weeks’ time a new Argentinian LCC, called Flybondi, will begin operations. Details for the carrier’s planned 16 domestic routes can be seen in the table below, including commercial operations from Buenos Aires El Palomar, an army base 18 kilometres west of the capital. The carrier plans to operate 10 737-800s by the time its full schedule becomes live, with it presently having one of the type. It should be noted that there are currently no LCC seats being offered in the Argentinian domestic market, with all 1.02 million departing seats in 2017 being offering on international services.

By the time that its full schedule becomes live, Flybondi will be operating 89 weekly flights, with its main route being between Buenos Aires and Cordoba, an airport pair that will be flown twice-daily according to the carrier’s booking engine, however the schedule does alter slightly on some days this summer. The carrier is not the only low-cost to be starting up in Argentina this year, with European LCC Norwegian also looking to explore the market. The latter carrier already has one 737-800 with an Argentinean registration, but it is currently unclear which South American routes the airline will operate from the country. The only clear route that will operate to Argentina is its planned long-haul connection between London Gatwick and Ezeiza which is launching on 15 February, indicating that the airline may base its first 737-800s in Ezeiza, potentially using the aircraft for onward connecting traffic for London passengers.

While LCC penetration is currently the main focus of attention in Argentina, both ventures planned for 2018 will have a long way to go before they join the big leagues of the country’s top airlines. Presently, the nation’s number one airline is national carrier Aerolineas Argentinas, whic operated 14.65 million departing seats from the country in 2017, a 9.1% improvement from the 13.42 million it supplied in 2016. Following Aerolineas Argentinas is LATAM Airlines, which increased its seat capacity from Argentina by 12% to 5.78 million departing seats, between 2016 and 2017. While LCC operations only accounted for 4.0% of departing seats in 2017, both GOL and Sky Airline make it into Argentina’s top 12 airlines. 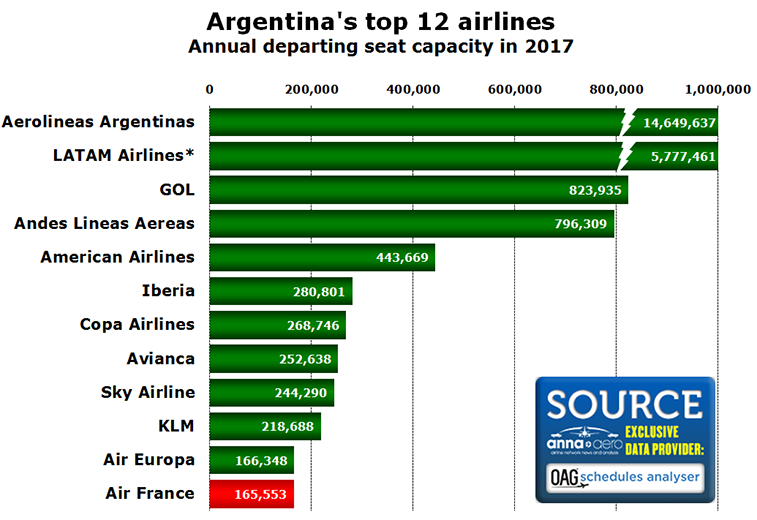 Of the airline’s that sit within the top 12, only one has seen a capacity reduction between 2016 and 2017, with Air France (highlighted in red) reducing its seat offering from Argentina by 11% according to OAG schedules. One new operator to Argentina is Azul Airlines, a carrier that entered the market on 6 March 2017 with a route between Belo Horizonte and Ezeiza. At the start of 2018, the airline also links the Argentinian capital to Navegantes and Cabo Frio. 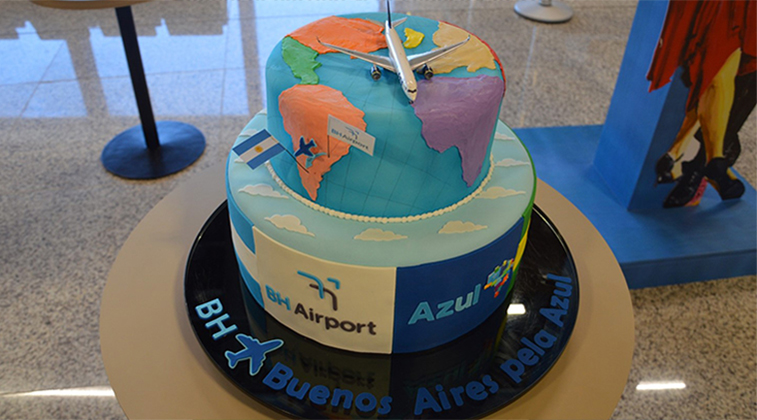 Azul Airlines was a new entrant to the Argentinian market in 2017, initially starting services between Belo Horizonte and Buenos Aires Ezeiza, with the capital also linked to Navegantes and Cabo Frio in Brazil this January. Two new airlines which will enter the Argentina market in 2018 include Norwegian and LCC start-up Flybondi.