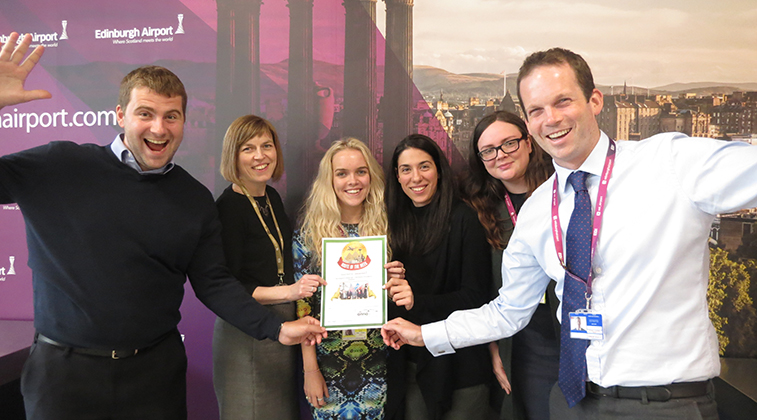 The Edinburgh Airport route development team has another reason to celebrate! After picking up the anna.aero Route of the Week award for Norwegian’s new low-cost, long-haul services to Hartford, Providence and Stewart last June, the Scottish airport announced in January that it had set a new passenger record in 2017. More than 13.43 million passengers passed through its terminal last year. International traffic has more than doubled at Edinburgh over the past 10 years.

Edinburgh is the largest airport in Scotland, based on passenger numbers. It was the sixth largest in the UK the last time the Civil Aviation Authority (CAA) published a full year of annual passenger statistics at the end of 2016, a position it is likely to have maintained throughout 2017. The only UK facilities with more passengers than Edinburgh in recent years have been the big four London airports, Heathrow, Gatwick Stansted and Luton, plus Manchester.

Edinburgh, along with Heathrow, Gatwick, Stansted, Glasgow, Aberdeen and Southampton, was previously owned by the British Airports Authority (BAA), but in 2012 it was sold to Global Infrastructure Partners (GIP). The change of ownership corresponded with an upswing in the airport’s passenger numbers. From 2008 to 2012, Edinburgh’s traffic figures fluctuated yearly between moderate growth and decline, and by the end of this period, passenger numbers had only increased by 2.2% from about 8.99 million to 9.19 million. Since 2012, Scotland’s premier gateway enjoyed five consecutive years of growth, with annual passenger numbers increasing by 46% between 2012 and 2017. 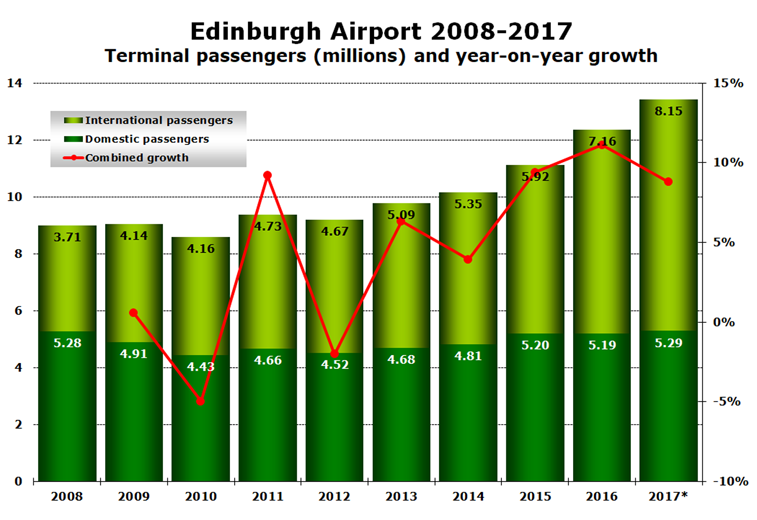 In 2008, just under 59% of all passengers passing through Edinburgh’s terminal were travelling on domestic services, but by 2017 they accounted for just 39% of the total. Domestic traffic declined by 16% between 2008 and 2010, falling to 4.43 million passengers, its lowest tally at any point during the past 10 years. This decline was probably a result of the global economic recession taking place at the time. Since 2010, the Scottish capital’s airport has witnessed a gradual recovery in domestic traffic, although it took until 2017 for numbers to return to, and marginally exceed, the levels of 2008. In contrast, international traffic has more than doubled, increasing from 3.71 million to 8.15 million passengers between 2008 and 2017. The last three years have experienced some of the strongest growth, with international traffic increasing by 52% between 2014 and 2017.

OAG schedules show that four airlines, namely easyJet, Ryanair, British Airways and Flybe, combined provided about 71% of all departing seats from Edinburgh in 2017. BA and Flybe’s links from the airport are heavily focused on domestic connections, while 85% of Ryanair’s departing capacity in 2017 was operated on international routes. easyJet’s network was the most balanced in terms of domestic and international capacity among the big four operators from Edinburgh in 2017, with 52% of its departing seats being on international services and the remaining 48% domestic. Four of the largest five operators from the airport last year were UK-based carriers. Four of the top 12 carriers were LCCs, seven full-service operators and one, Flybe, a regional airline. 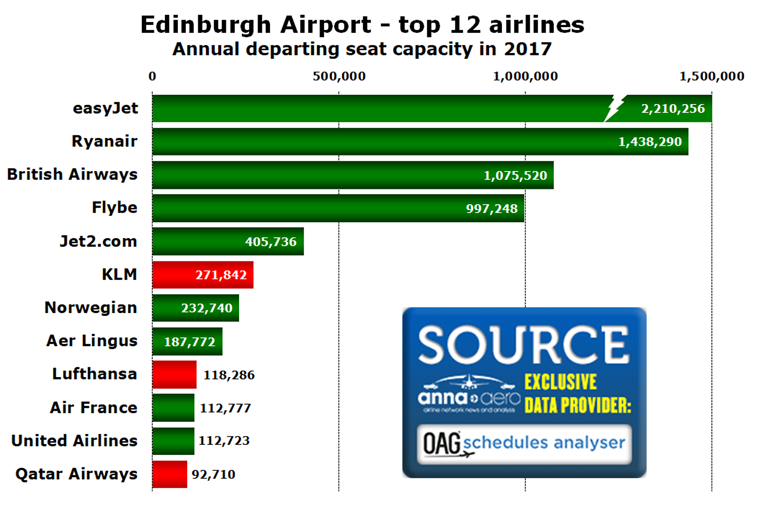 Nine of the 12 largest operators from Edinburgh increased their capacity at the airport in 2017. The largest increases came from Jet2.com, Norwegian and Aer Lingus, which deployed 47%, 44% and 36% more departing seats respectively when compared to 2016. The top six carriers maintain the same positions in the table for 2017 as they did in 2016. Outside of the top 12, Eurowings saw one of the largest increases in seats in 2017, when its published capacity for the past two years is combined with that of Germanwings. The LCC introduced a new service from Munich during 2017. Three of the top-ranked carriers (highlighted in red) cut capacity from Edinburgh between 2016 and 2017, although these reductions were all marginal. Vueling dropped out of the top 12 after cutting its capacity from Edinburgh by more than one-third.

The three routes with the most capacity from Edinburgh in 2017 all serve London. The largest airport pair is the link with Heathrow. From a domestic perspective, the four largest routes are all to London airports, with Bristol the largest domestic route outside of the UK capital. Half of the top 12 domestic routes saw an increase in capacity from Edinburgh last year, while the other 50% experienced reductions (highlighted in red). The number of seats available to Manchester increased by more than one-quarter, while Heathrow also saw a 16% boost in capacity with the introduction of Flybe services, following the airline’s acquisition of slots formerly used by Virgin Atlantic’s Little Red operation. The top 12 international destinations from Edinburgh in 2017 were all in Europe, with Amsterdam leading the way. All but two of the top-ranked international services experienced an increase in capacity from in 2017, with Geneva witnessing the largest growth of about 32%. Copenhagen and Frankfurt (highlighted in red) were the only top 12 destinations to see cuts in seat numbers when compared to the previous year, with the Danish capital suffering the largest decline of about 12%. The destinations with the most capacity from Edinburgh outside of Europe in 2017 were Doha and New York Newark. anna.aero’s New Routes Database shows that airlines launched 32 new services from Edinburgh during 2017, with notable examples including Norwegian’s three new low-cost. long-haul links to Stewart, Providence and Hartford in the US. A further nine new services have already been announced for 2018, including a summer seasonal transatlantic connection to Washington Dulles by United Airlines which begins in May.

Calling all British and Irish airports!!

From 12-13 June London Heathrow will host the 3rd British-Irish Airports EXPO at London Olympia. With more than 200 suppliers and service providers in attendance, the EXPO is a convenient, free-to-access opportunity to research your airport’s future investments and connect with the leading vendors and service providers supporting British and Irish Airports. The 3rd British-Irish Airports EXPO will also feature a large amphitheatre-style conference stage within the exhibition, where British-Irish airport CEOs and other CAPEX, Operations Directors, and senior departmental specialists present their development and CAPEX plans.The EXPO is supported by The British Aviation Group (BAG), Enterprise Ireland, the Department for International Trade and the Regional and Business Airports (RABA) Group. 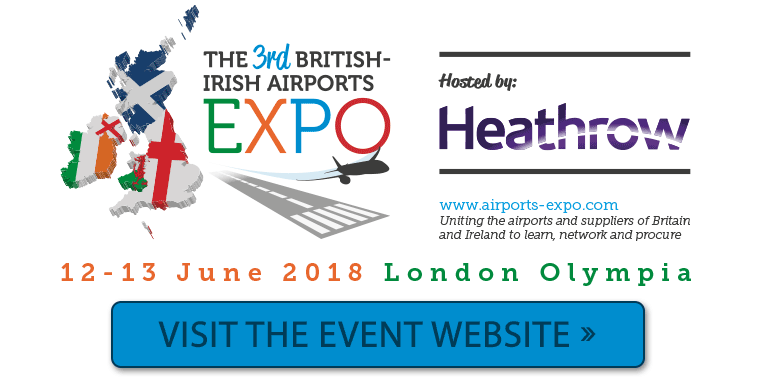