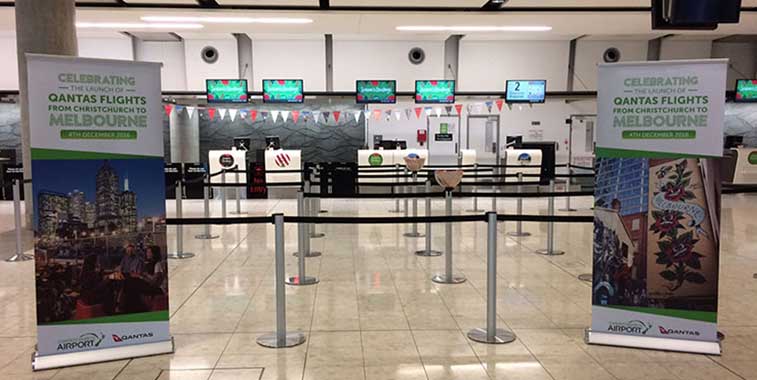 The number of seats available between Australia and New Zealand has increased by more than one-third since 2008. The largest routes by capacity are those linking Auckland with Sydney, Melbourne and Brisbane. The vast majority of capacity in the market is provided by full-service carriers. One of the most recent route launches was Qantas’ link between Melbourne and Christchurch which it introduced in December 2016.

The Australia-New Zealand market, otherwise known as the trans-Tasman market, is home to one of the most mature commercial air service networks in the Asia Pacific region. Passenger statistics from the Australian Government’s Department of Infrastructure, Regional Development and Cities, up to and including October 2017, show that Auckland was the second largest international destination from Australia last year, with two New Zealand airports making the top 10.

The number of seats available between the neighbouring nations grew from 7.55 million to 10.25 million from 2008 to 2017, representing a 36% increase in capacity over the past 10 years. During the same period, the average capacity on departing flights between Australia and New Zealand increased from 196 to 217 seats, indicating the use of larger aircraft. OAG schedules show that the percentage of trans-Tasman flights operated by narrow-body types has actually increased, from about two-thirds in 2008 to 75% of all services in 2017, but that there has been an increase in the frequencies operated by larger narrow-body aircraft. The 737-800 and A320 were the main single-aisle aircraft used between Australia and New Zealand in 2017, while smaller types including the 737-300 and 737-400 have been phased-out since 2008. 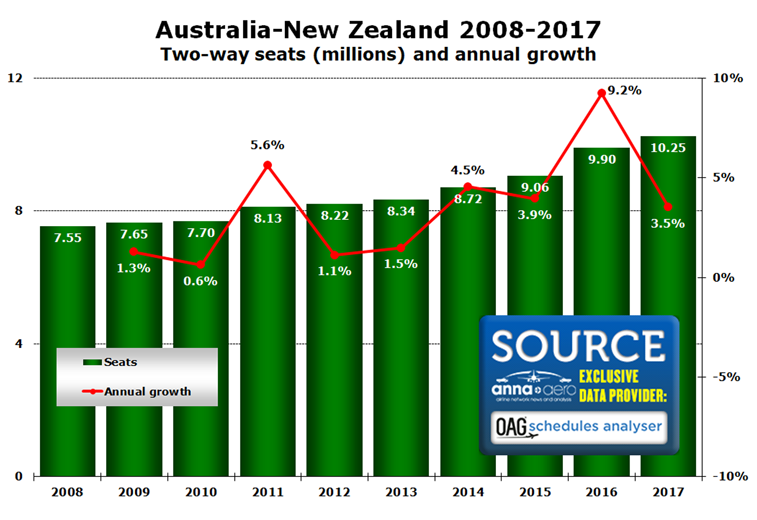 The seats available on flights between Australia and New Zealand have been increasing every year since 2008. Unlike many commercial air service networks, the Australia-New Zealand market does not appear to have suffered significant capacity cuts during the peak of the global economic downturn in 2008 and 2009. Capacity continued to see year-year increases during this period, but growth was marginal. From 2008 to 2010 available seat numbers only increased by 1.9%. Some of the strongest growth since 2008 has occurred over the past four years with capacity increasing by 23% from 2013 to 2017.

Only 15 airports saw regular departures on trans-Tasman services in 2017, including nine in Australia and five in New Zealand. The top 12 airports for departing seats between the two countries include eight in Australia and just four in New Zealand. This analysis considers there to be five main hubs in this market, consisting of Sydney, Melbourne and Brisbane in Australia and Auckland and Christchurch in New Zealand. These five hubs top the charts for most departing capacity in the market, with the quintet accounting for more than three-quarters of all departing seats in 2017. The largest routes by capacity in 2017 were those linking Auckland with Sydney, Melbourne and Brisbane. The latter two of these saw slight increases in seats over 2016, with the Auckland to Sydney link experiencing a moderate reduction. 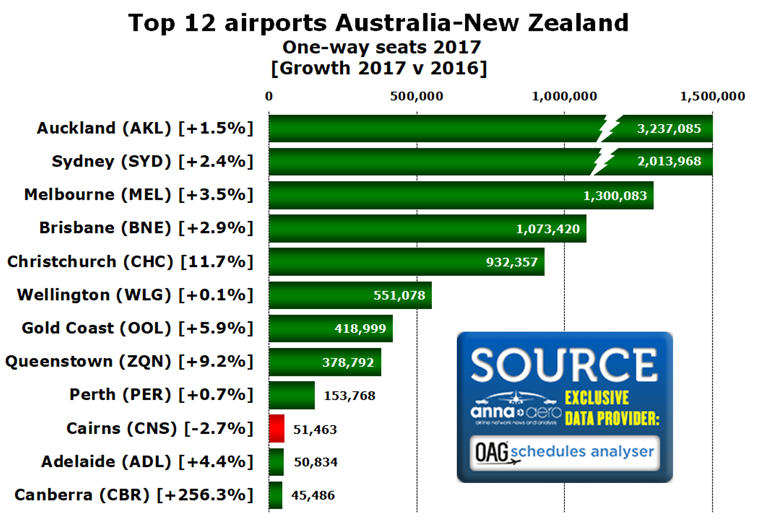 Canberra and Christchurch saw the biggest increases in trans-Tasman capacity amongst the top 12 airports from 2016 to 2017. Canberra’s capacity increased by more than 250%, albeit from a small base, as a result of the introduction of services by Singapore Airlines on its ‘Capital Express’ service linking the capital’s of New Zealand and Australia with its home hub. The route was only introduced in late 2016, hence the additional capacity when operated for a full year during 2017. All sectors are operated by a 777-200ER which flies Singapore-Canberra-Wellington-Canberra-Singapore four times per week. Christchurch experienced a 12% jump in capacity to Australia thanks to additional frequencies on links to Melbourne and Brisbane. Only one of the top 12 airports (highlighted in red) saw a reduction in trans-Tasman capacity, with Cairns seeing a marginal drop in departing seats.

The five main hub airports dominated in the Australia-New Zealand market in 2017, accounting for 8.56 million departing seats, which is equivalent to 83% of the total available capacity. The percentage of overall seats departing from one of the five hubs has remained fairly consistent over the past 10 years, although non-hubs airports have increased their share of the market in recent times. From 2008 to 2017, non-hub airports witnessed an 81% increase in departing seats on trans-Tasman services, compared to a 29% increase at the five hubs. This resulted in the non-hub facilities growing their share of departing seats from 12% to 17% over the past 10 years. The non-hub airports with the most departing seats in 2017 were Wellington and Gold Coast. 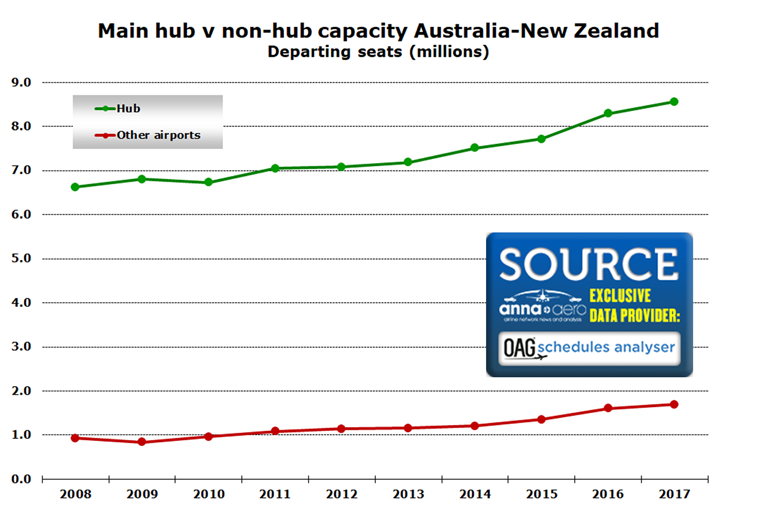 Only 10 airlines operated regular services from Australia to New Zealand in 2017. National flag carriers Air New Zealand and Qantas led the way, accounting for more than half of the available one-way seats. In total eight of the 10 operators can be classed as full-service carriers while the remaining two, Jetstar Airways and AirAsia X are LCCs. Singapore Airlines added the most capacity from 2016 to 2017, followed by AirAsia X and Qantas. Four carriers (highlighted in red) cut capacity from Australia to New Zealand from 2016 to 2017. The largest capacity cuts came from China Airlines and Jetstar Airways, although Philippine Airlines has now completely withdrawn from the market after replacing its Manila to Auckland via Cairns service with direct flights between Manila and Auckland in late 2017. 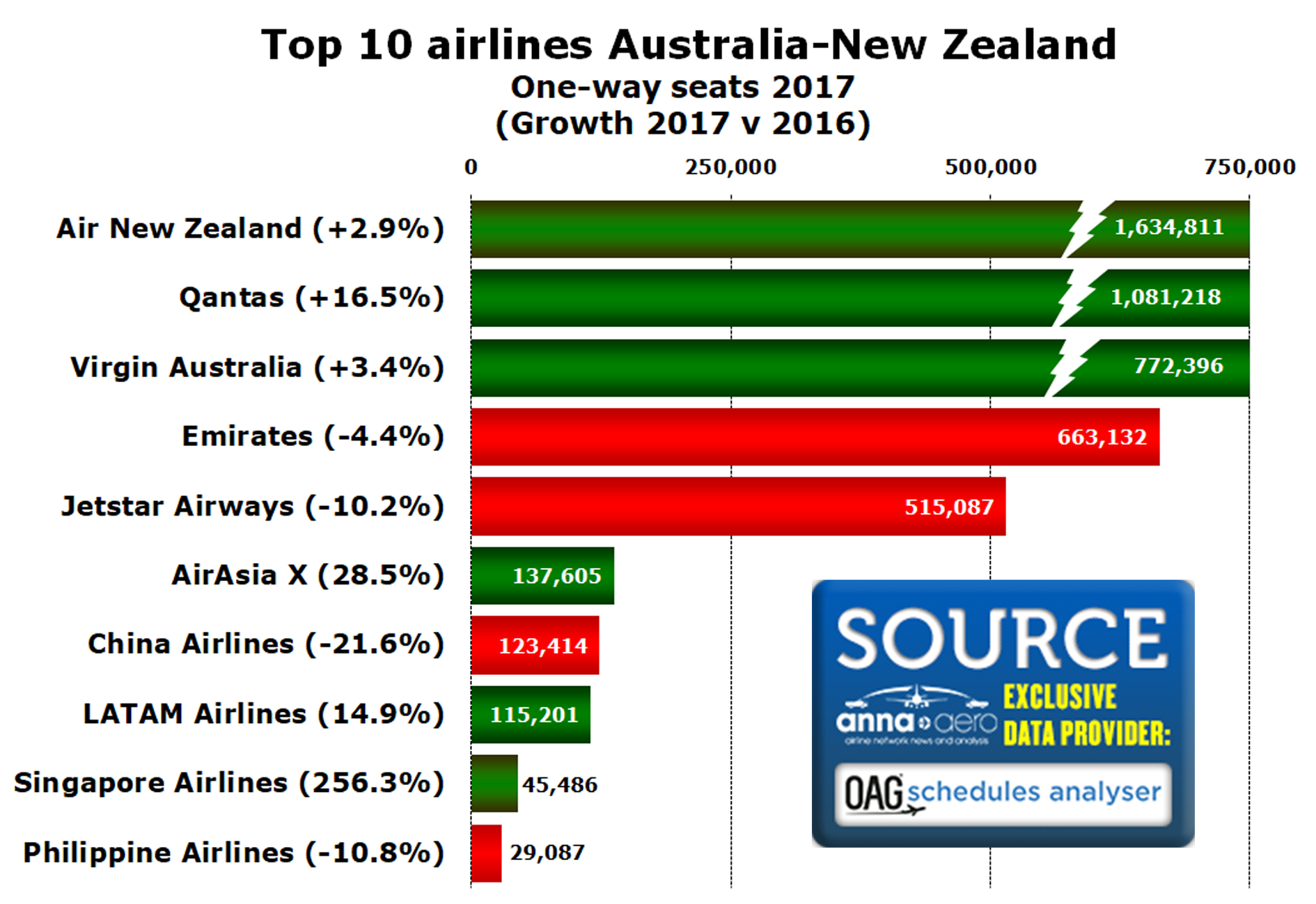 In total, full-service carriers accounted for 87% of the seats available from Australia to New Zealand in 2017 up from 86% in 2016, with the remaining seats provided by LCCs. Only four of the carriers that offered trans-Tasman services in 2017 were based in Australia or New Zealand. The remaining six used fifth-freedom rights to connect points in Australia and New Zealand as part of an overall itinerary that originated from their home markets. Singapore Airlines’ and Philippines Airlines’ itinerary’s have already been described. Emirates, AirAsia X, China Airlines and LATAM Airlines also operate such services. Emirates offered the most capacity under fifth freedom rights between Australia and New Zealand in 2017. The MEB3 carrier operated on four trans-Tasman airport pairs last year, which formed part of an onward service to and from Dubai. China Airlines has reduced its capacity on trans-Tasman links in 2018 by dropping several fifth freedom operations. 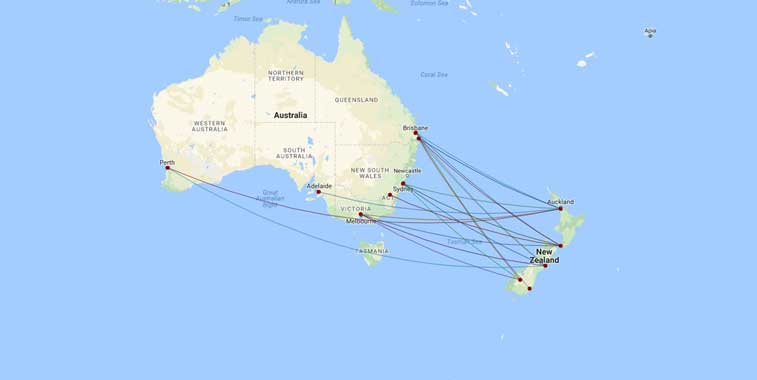 Many of the seats available in the Australia-New Zealand market operate via one of the five main hubs; Sydney, Melbourne, Brisbane, Auckland and Christchurch. The route map for a week in January 2018 shows that there were no services at all linking Australia’s Northern Territory with New Zealand. Despite being the fourth largest airport in Australia, Perth was only the ninth largest for trans-Tasman seats during 2017.