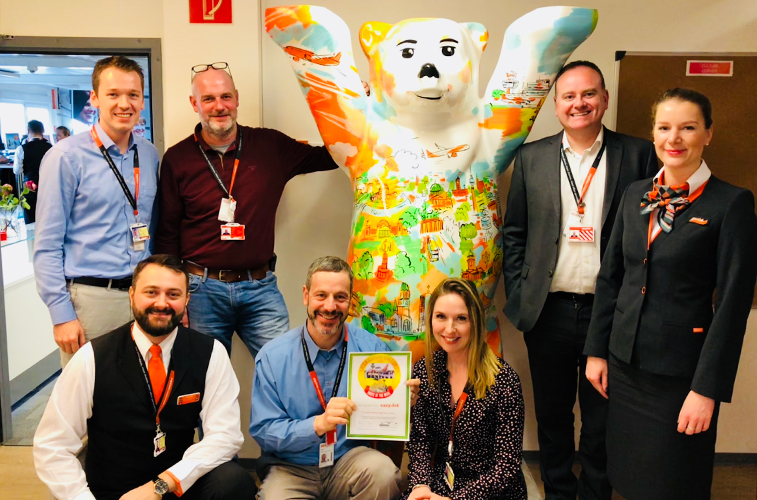 easyJet this week celebrated winning the anna.aero Route of the Week award, given to the LCC for its first operations from its Berlin Tegel base, starting initially with flights to 13 destinations, while a further six will be brought online before the beginning of the summer season. Seen celebrating the airline’s win, posing with the easyJet-branded bear that was given to the carrier by the airport, are the team that set up the base: Oliver Schmitz, Cabin Services Regional Manager; Matjaz Hribernik, Cabin Manager; Axel Mallallieu, OCC Manager; Marc Taback, Ground Operations Manager; Amy Roche, Cabin Services Base Manager; Alberto Santamarta, Head of Ground Operations easyJet Europe; and Gina Riep, Cabin Crew. 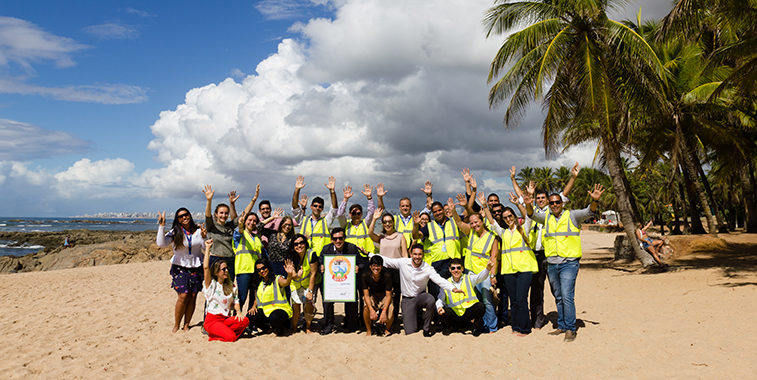 Salvador de Bahia Airport certainly celebrated being the winner of the first anna.aero Cake of the Week award of 2018 in style this week, with the airport team going down to the beach to toast the win. The Brazilian facility gained the award for the bake it presented at the launch of GOL’s new service to Santiago which began on 5 January. 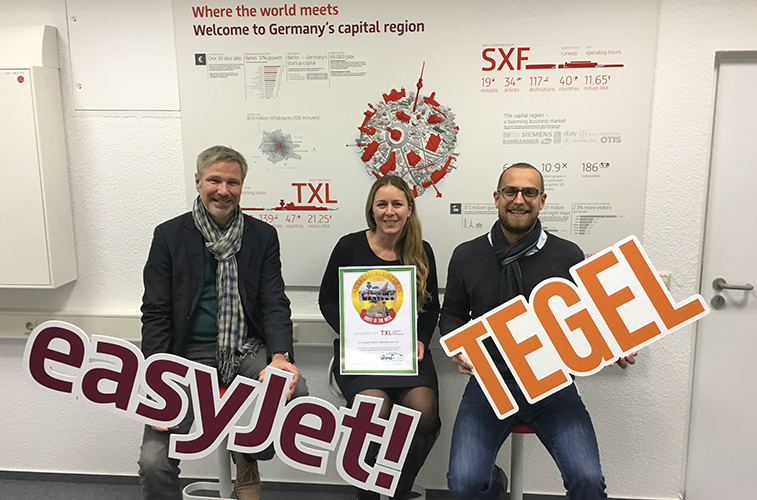 Moscow Sheremetyevo handed out its annual awards for 2017 at the end of last year. This is the third time that the Russian hub has held the award ceremony, attended by 100 representatives of airlines, tour operators and travel agencies. First Deputy Director General for Operations at Sheremetyevo Airport, Andrei Nikulin, said: “Sheremetyevo became one of the leaders in Europe in terms of growth of passenger and cargo traffic, as well as punctuality, in 2017. This is a joint achievement of Sheremetyevo, Aeroflot and all airlines operating at the airport. Next year Sheremetyevo will join the league of the largest airport hubs in the world in terms of passenger traffic and terminal capacity. We are trying to create sustainable conditions for long-term development of airlines for the benefit of our passengers and country.” Among the winners on the night for punctuality were: airBaltic – the most punctual foreign airline with more than 200,000 passengers per year; Alitalia – most punctual foreign airline in the 100,000 – 200,000 annual passengers category; Finnair – most punctual foreign airline with less than 100,000 passengers; China Southern Airlines – most punctual Asian airline; and Severstal – most punctual Russian airline. Other winners of the evening included: Ellinair, Korean Air, flydubai, Air France, Bulgaria Air, Royal Flight, and the Hainan Airlines Group. Sheremeteyevo had an excellent 2017, with highlights including welcoming eight new airlines, meaning that 49 carriers now operate from the airport. Bahrain Airport celebrated the 10-year anniversary of flights by Jet Airways to the airport this week, with festivities including a cake which had been made to mark the occasion. Bahrain Airport Company COO, Ayman Zainal, said of the milestone: “Our partnership with Jet Airways has been one of our most fruitful, helping us reinforce the Kingdom’s position as a hub for airlines in the region. It has also played an important role in strengthening bilateral relations between Bahrain and India. We are confident that our continued association with Jet Airways will bring many more successes in the future.” The Indian carrier currently operates a weekly service between Mumbai and Bahrain. 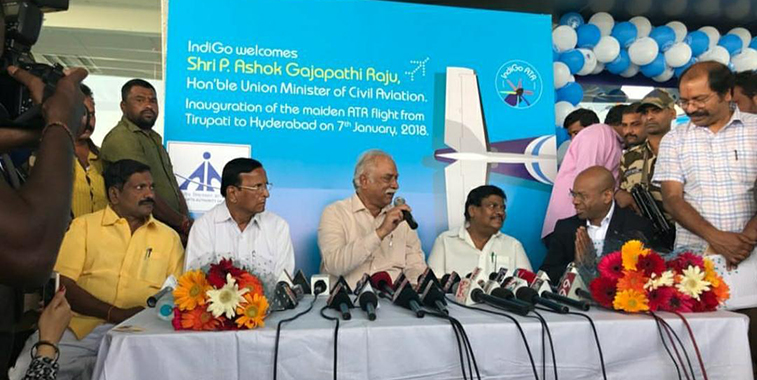 IndiGo commenced flights to Tirupati on 7 January, beginning a route from Hyderabad. The carrier will operate the 417-kilometre route three times daily on its fleet of brand new ATR 72-600s. The link is already served by SpiceJet four times daily, TruJet three times daily and Air India daily. Among those at the first flight press conference were the Honourable Minister of Civil Aviation, Ashok Gajapathi Raju, and Aditya Ghosh, President and Whole Time Director of IndiGo. 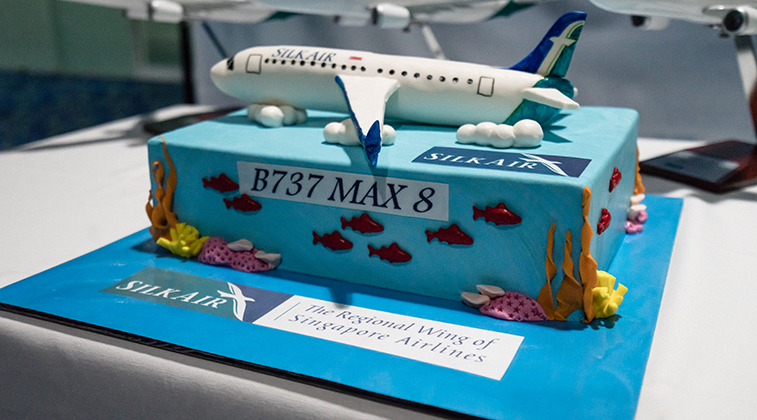 On 12 January the first in a series of 14 flights from the UK this winter landed at Akureyri in North Iceland, with the first being from Cardiff. The inaugural passengers were the first to fly directly from the UK to Akureyri, a destination that was recently selected as the number one place to visit in 2018 by The Guardian. The travel agency Super Break is responsible for the flights to Akureyri from 11 different locations which will take place from January to February. To celebrate the start of these flights, a ribbon cutting ceremony was held, with proceedings being carried out by the Mayor of Akureyri, Eiríkur Björn Björgvinsson and Minister of Tourism, Þórdís Kolbrún Reykfjörð Gylfadóttir. Super Break is already planning flights for W18/19, increasing the number of services up to 22 to start with. The company has already sold over 95% of the available seats, which exceeded expectations. The inaugural flight between the UK and Akureyri was also celebrated at Cardfiff Airport. Seen posing at the aircraft door are: Cardiff Airport Commercial Director, Spencer Birns; Icelandic and Cardiff City footballer, Aron Gunnarsson; and Super Break Executive Chairman, Hugo Kimber. Gunnarsson commented on the services by saying: “I’ve really enjoyed today’s activities at Cardiff Airport. Coming from Akureyri, I am a real ambassador for the country, and I am delighted that holidaymakers can now get to this incredible part of the world more easily thanks to Super Break.” Among the celebrations to take place at Welsh airport was an Icelandic choir which serenaded passengers with traditional songs before boarding.