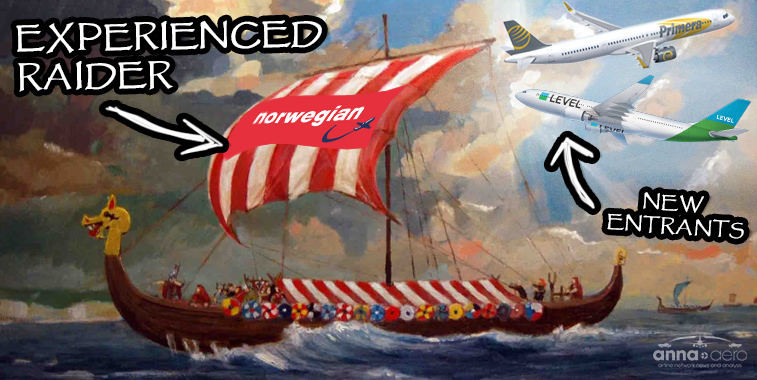 Norwegian remains the leading carrier for weekly low-cost long-haul (LCLH) services in S18. The LCC will operate 446 LCLH departures during the period analysed here, more than twice as many as second-placed AirAsia X. While Norwegian continues to lead the way in exploring new LCLH markets, it has been joined by several new entrants in the past 12 months with IAG’s LEVEL beginning operations last year, and Primera Air due to start services from Birmingham, London Stansted and Paris CDG during 2018.

According to anna.aero’s analysis of OAG data for S18, there will be 1,454 weekly low-cost long-haul (LCLH) departures per week, operated by 20 different carriers, across 118 airports worldwide. For the purposes of this analysis, we have defined long-haul as anything over 4,500 kilometres (which is consistent with our definition when determining winners in our annual ANNIE Awards). Firstly the small print. To keep things simple, only those carriers categorised as LCCs by OAG are considered here, with the exception of Primera Air and IAG operation LEVEL, as the latter is not currently recognised as an individual carrier, because it still operates under Iberia’s IATA code. Since it is clearly a significant new entrant to the LCLH market, LEVEL’s schedule has been manually separated from Iberia’s OAG data for inclusion in this analysis. Air France’s new unit Joon is also not recognised as an LCC in OAG and, since it is not immediately apparent whether it is following a standard LCC model, the carrier is also not included here.

We have used 6 August 2018 as our analysis period, and compared it with the equivalent week from 2017. This reveals that Norwegian has extended its lead at the top of the table over AirAsia X to retain its position as the world’s #1 LCLH carrier, in terms of weekly flights offered. The Scandinavian LCC has increased its departing weekly LCLH flights by 65% through a combination of adding new routes, or upping capacity on existing services. The US remains Norwegian’s largest LCLH destination market, with the carrier scheduled to operate transatlantic links from nine European countries during S18. This is two more than last summer, as the LCC added Rome Fiumicino services to the US late in 2017 and plans to introduce Amsterdam to its network this coming summer. Norwegian’s main LCLH traffic flow remains between the UK and the US with 74 flights departing in each direction during the week of 6 August. Norwegian’s growth, combined with a reduction of six flights in AirAsia X’s comparative flying programme from S17 to S18, means that the former has extended its lead in weekly LCLH sectors to 278, up from 97 the previous year. Norwegian also offers the most capacity on LCLH sectors with 134,000 weekly seats available, more than twice as many as second-placed AirAsia X. 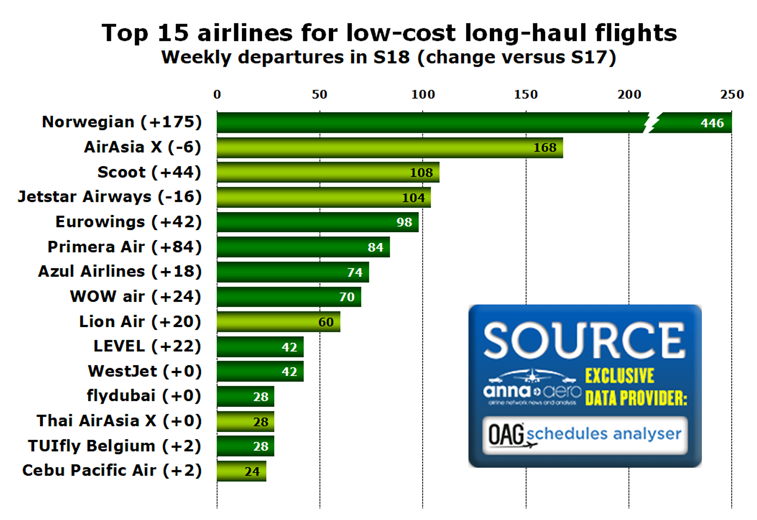 Among the remaining top 15 LCLH airlines, Primera Air, Scoot and Eurowings saw the largest increase in weekly flights from S17 to S18. The latter two carriers have both added more than 40 frequencies. Scoot leapfrogged Jetstar Airways (the only top 15 carrier except AirAsia X to reduce the number of LCLH departures) to take third place in the table, following the addition of a number of new airport pairs including those from Singapore to Melbourne, Singapore to Berlin Tegel and Singapore to Honolulu via Osaka Kansai. Primera Air, a new entrant to the LCLH scene in 2018, is straight in at number six and will offer transatlantic flights to Boston, New York Newark and Toronto Pearson from Birmingham, London Stansted and Paris CDG. IAG’s LCLH arm LEVEL moved up the table several places, after more than doubling its number of flights compared to last year. In addition to adding a link to Boston from its Barcelona base, LEVEL will also start operating from Paris Orly in 2018, with links to Montreal and Pointe-à-Pitre, followed later in the year by flights to Fort-de-France and New York Newark. Six of the top 15 LCLH carriers are based in Asia Pacific (highlighted in light green), with six in Europe and one each in North America (WestJet), South America (Azul Airlines) and the Middle East (flydubai).

The average sector length of all LCLH flights in 2018, for the week under analysis, is 6,908 kilometres. The carriers with the longest average LCLH sectors are Eurowings and LEVEL, with average route lengths of about 8,140 kilometres and 7,972 kilometres respectively. The top 15 carrier with the shortest average LCLH sectors is Thai AirAsia X at 4,643 kilometres. Many of the top 15 carriers also operate short-haul networks, but those sectors that are less than 4,500 kilometres in length are not considered here.

The number of airports handling at least one weekly LCLH departure grew from 86 to 118 from S17 to S18, which represents an increase of 37%. London Gatwick has overtaken Kuala Lumpur to become the busiest departure airport for LCLH services. Gatwick’s growth as an LCLH hub is mainly due to Norwegian’s network from the airport. The LCC doubled its weekly LCLH departures from Gatwick for S18 and has added seven new long-haul links since last summer, including more destinations in the US and services to Buenos Aires Ezeiza and Singapore. Norwegian accounts for 75% of Gatwick’s weekly LCLH departures in S18, while the London airport is the largest base for the airline’s long-haul operations. 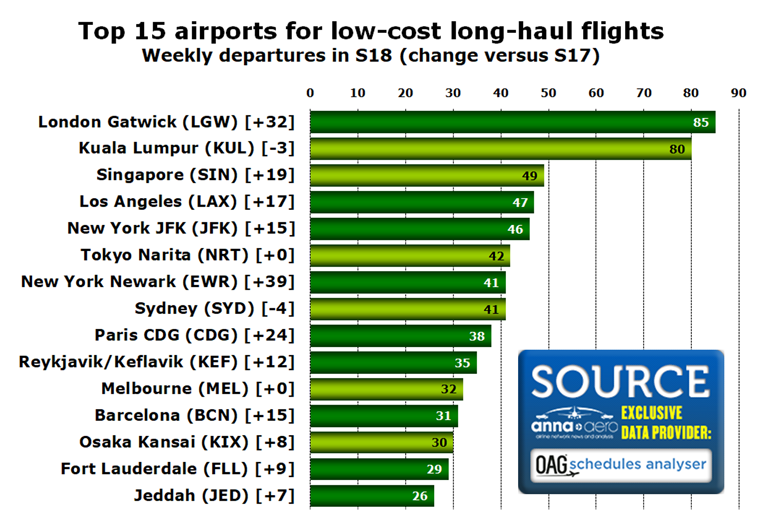 Other strong climbers include Newark which will see 39 more LCLH departures this year, thanks to Primera Air and new services from Norwegian. Singapore has moved up from seventh to third spot while Los Angeles is up from eighth to fourth position. New York JFK moved up one place from sixth to fifth. Only two of the top 15 airports saw a reduction in weekly LCLH flights with Sydney falling from third to eighth place after a moderate reduction in flights since S17. In all, six of the top 15 airports are in the Asia Pacific region (highlighted in light green). Of the remaining facilities, four are in the US, with four in Europe and one (Jeddah) in the Middle East.

The most popular aircraft for use on LCLH flights in S18 are 787 and A330 family variants which account for 590 and 486 weekly flights respectively or 74% of the total departures. One interesting development in the LCLH market has been a move towards a greater use of narrow-body aircraft on longer routes. The number of weekly LCLH sectors operated by narrow-body types has increased by more than 75% from S17 to S18, while those flown by wide-body aircraft have only increased by about 31%. As a result, narrow-body aircraft will operate 21% of the weekly LCLH departures in S18, up from 16% the previous year. Primera Air and flydubai are the only top 15 LCLH carriers with narrow-body-only operations on long-haul sectors in S18. Of the remaining airlines, eight use wide-body aircraft only on LCLH services, while five deploy a mix of narrow-body and wide-body types. 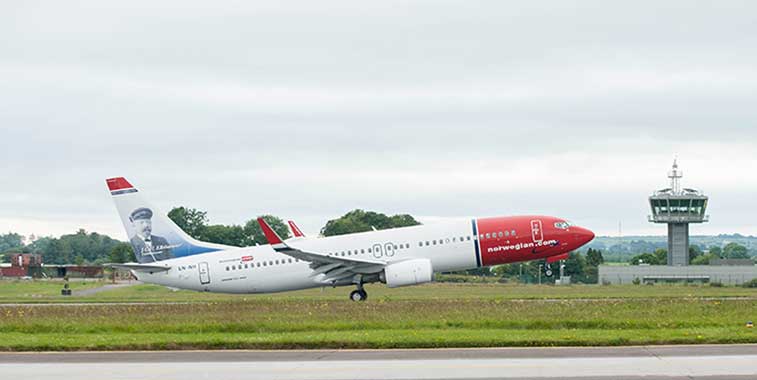 The number of LCLH flights operated by narrow-body aircraft increased from 16% to 21% from S17 to S18. The 737 MAX 8 and A321 are the most popular narrow-body types for LCLH operations. Norwegian has deployed 737s on transatlantic sectors linking Ireland and Scotland to secondary US airports. On 1 July 2017 the LCC operated the first ever scheduled transatlantic service from Cork airport, with the 737-800 departing for Providence.

Norwegian and Primera Air will operate the most LCLH sectors with narrow-body aircraft during the week commencing 6 August. The two carriers will deploy narrow-body types on 90 and 84 flights respectively. Norwegian began a range of routes with 737-800s and 737 MAX 8s connecting Ireland and Scotland with secondary US airports in 2017, including Hartford, Providence and Stewart. It was announced last week that it will discontinue its service between Edinburgh and Harftford however. All of Primera Air’s LCLH routes will be operated by A321 aircraft. The 737 MAX 8 and A321 are the most popular narrow-body types for LCLH services and the performance enhancements offered by Boeing’s and Airbus’ latest MAX and neo (new engine option) products, including improvements in fuel burn, could lead to the opening of more thinner demand LCLH airport pairs in the future. It may also result in narrow-body types operating an increasing percentage of overall LCLH departures in the coming years. 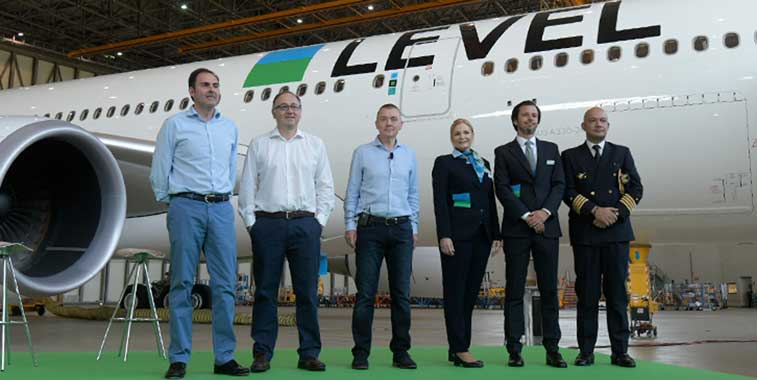 Several new entrants have entered the LCLH market in the past 12 months. LEVEL began operations under Iberia’s IATA code in 2017 and has doubled its weekly departures in S18. Paris Orly will become the carrier’s second base this year to add to its existing Barcelona operations. Primera Air, another new entrant, will commence services to the US and Canada from Birmingham, London Stansted and Paris CDG during S18.