SWISS grew annual traffic by 19% between 2010 and 2017, however it is still losing home market share to easyJet despite increased capacity 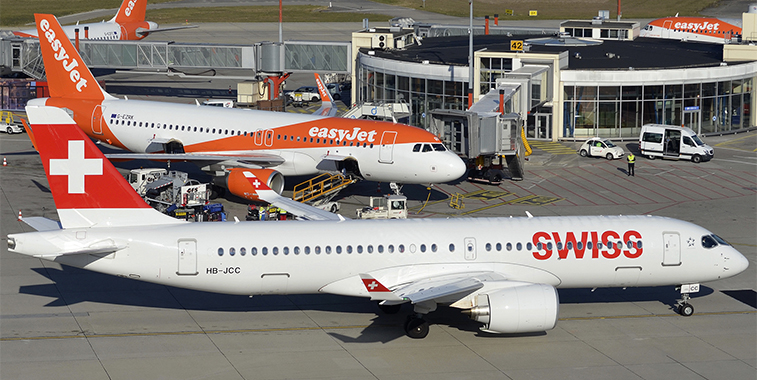 SWISS, one of the first operators of the CS300, is still Switzerland’s largest carrier. The airline upped its seat offering from the nation by 6.0% last year. Nonetheless, even with the Star Alliance member enhancing its capacity to just over 12 million departing seats, and flying more passengers than ever before, it is still losing market share to LCC rival easyJet, with the UK airline raising its seat count last year by 11% to 7.47 million one-way seats from Switzerland.

SWISS, a Star Alliance carrier and member of the Lufthansa Group, appears to be an airline which is growing at a sustainable and respectful rate, flying more passengers and offering more seats then ever before. According to ch-aviation, SWISS’ fleet is currently made-up of the following aircraft: five A319s; 20 A320s; nine A321s; 14 A330-300s; seven A340-300s; eight 777-300s; eight CS100s; and seven CS300s. The carrier Helvetic Airways also operates flights on behalf of SWISS using its seven E190s and four F100s, while Austrian Airlines utilities four of its Q400s on behalf of SWISS to fly routes to various destinations throughout Germany, Austria and Luxembourg, plus its domestic service between Zurich and Lugano. The average age of all aircraft currently flying for SWISS is just over 11 years.

In 2017 SWISS transported just under 16.9 million passengers, 2.3% more than it flew in 2016. Last year’s result is the best recorded by the carrier since 2012, a year when passenger traffic increased by 3.3% over the total of 2011. With the demand for air travel declining during the early part of the millennium, with factors for this including 9/11 and the SARS outbreak, the national carrier of Switzerland has bounced back from the woes of the early 2000s, with its annual traffic growing by 84% between 2004 and 2017. 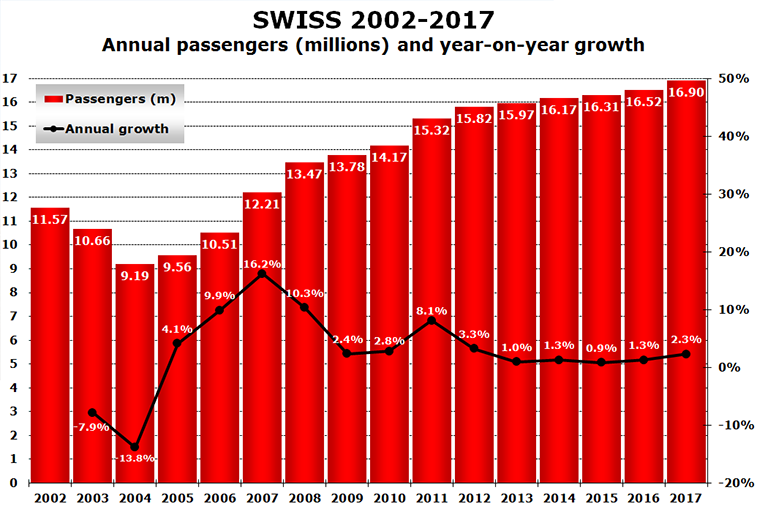 On its European services last year, SWISS recorded an average load factor of just under 78%, a 1.1% improvement on its 2016 result. With regards to transcontinental services, the mean load factor increased by 0.9% between 2016 and 2017, with an average of over 84% being posted for last year according to the carrier’s latest statistics.

Zurich is by far SWISS’ leading airport, with it being home to 87% of the airline’s departing seat capacity from its home nation in 2017. This is the highest percentage share of seats that Switzerland’s largest city has had with SWISS during the time analysed, with its second-best year during the past decade being 2009, a year when it had an 86% share. Departing seat capacity from Zurich with the Star Alliance member increased by 9.1% last year, while at Geneva the carrier cut its seat offering by 7.7%. The airline used to have a reasonable sized operation at Basel, with the carrier in S10 serving nine international routes from the airport. Nonetheless, the airline stopped flying from Basel in May 2015 according to OAG schedules. The three airports illustrated in the graph below are not the only home country airports for SWISS, as the carrier also serves Lugano from its largest hub. However, as the airport is not an operating base for SWISS, it has been left out of the graph. 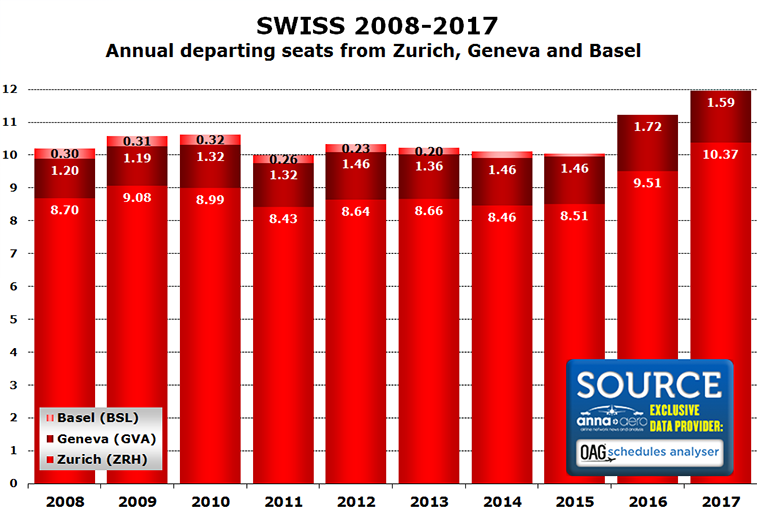 With the vast rise in seats from Zurich last year, SWISS was able to open new routes from the airport to Bergen, Cork, Figari, Nis, Sylt and Wroclaw. For 2018, the carrier plans to inaugurate flights to Bordeaux, Kiev Boryspil and Marseille from its biggest hub. Despite the cut in seats from Geneva in 2017, the carrier is planning to commence seasonal services to Kalamata, Pula and Toulon in S18.

Seat offerings maybe up, but market share is plateauing

In 2017 SWISS increased its departing seat offering from Switzerland by 6.0% to just under 12.1 million seats, however even with this growth in capacity, LCC rival easyJet grew its offering by close to 11% last year to 7.47 million. This allowed the UK carrier to steadily eat further into the Star member’s majority of the Swiss market, with the Lufthansa Group carrier still only accounting for 33.5% of seats, the same share it had in 2016, even with it flying an extra 688,000 departing seats last year. The best 12-month period in the time analysed for SWISS in relation to market share was 2009, a year which saw it occupy just under 40% of all seats from Switzerland. 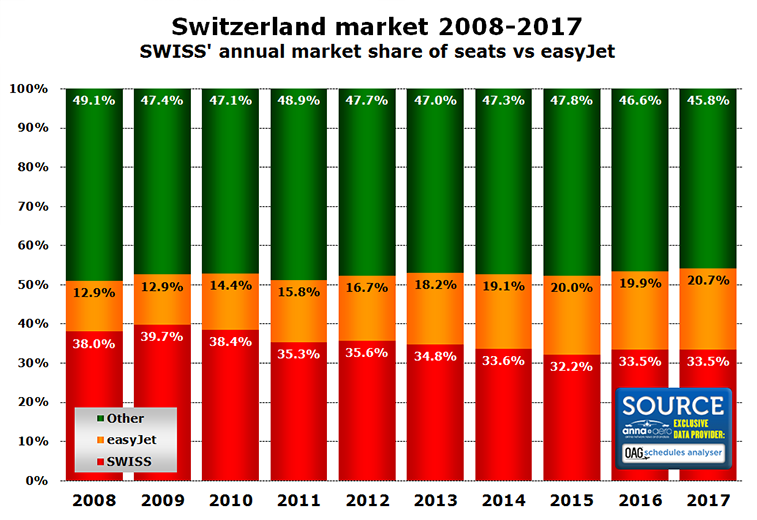 While the market is still very much still being led by SWISS, easyJet has managed to grow its share of seats from 13% in 2008 to just under 21% last year, while SWISS’ overall market share has dropped by 4.5 percentage points. That said, SWISS does have the advantage of the support of other Lufthansa Group carriers in its home market. If the capacity for Lufthansa, Brussels Airlines, Austrian Airlines and Eurowings is added to that provided by SWISS, the collective group flew 42% of seats from Switzerland last year, double the share of easyJet.

SWISS’ leading link is its domestic connection between Zurich and Geneva, a route which offered over 500,000 one-way seats in 2017, up 9.6% on the sum it provided on the sector in 2016. With SWISS’ largest base accounting for 87% of its departing seats last year, it is no surprise that all but one of the carrier’s top 12 routes depart from Switzerland’s largest city. The only route (highlighted in dark red) which does not involve Zurich is the carrier’s link from Geneva to London Heathrow, with the UK capital airport also being the destination of the airline’s second-biggest route. 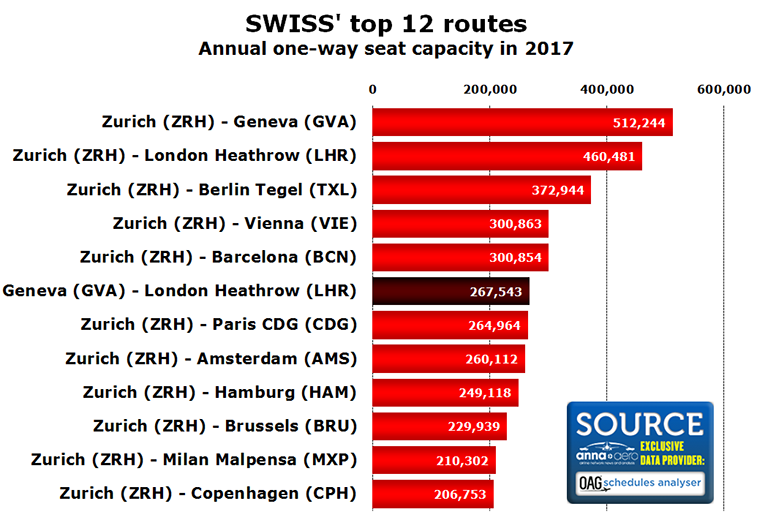 As can be seen in the graph above, all of SWISS’ top 12 routes are to destinations in Europe, with the airline’s leading long-haul service, with regards to seats, being between Zurich and New York JFK (21st largest route in 2017). Last year non-European services accounted for 19% of SWISS’ capacity. The main focus of the carrier’s growth in recent years has been on its short-haul network, possibly to counteract the growth of easyJet, with schedules showing that SWISS’ last long-haul route launch was five years ago, back on 12 May 2013, the day it resumed services between Zurich and Singapore after a four-year hiatus. 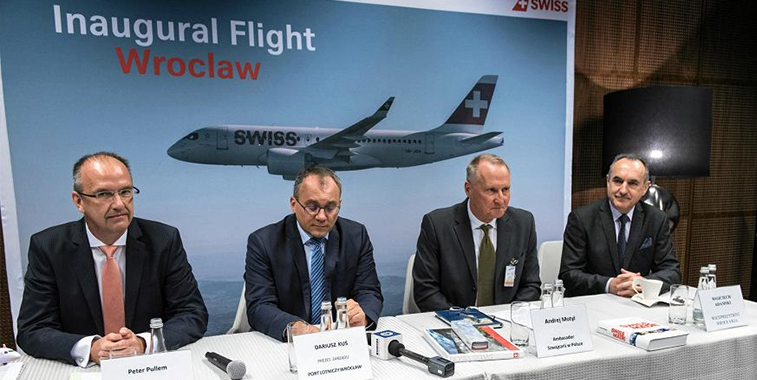 The last route which SWISS launched was between Zurich and Wroclaw on 30 October. Seen at the route launch press conference are: Peter Pullem, Head of Sales Central, Eastern and Southeastern Europe, Lufthansa Group; Dariusz Kuś, President of Wroclaw Airport; Andrej Motyl, Ambassador of Switzerland to Poland; and Wojciech Adamski, VP Wroclaw. European servies have certainly been the key area of growth for SWISS in recent years, with it nearly being five years since its last long-haul route inauguration, a resumption of flights between Zurich and Singapore in May 2013.