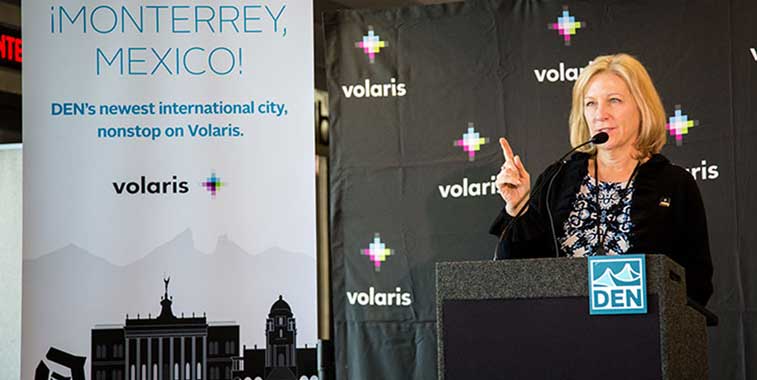 Passenger numbers grew by 48% at Monterrey from 2008 to 2017. Domestic flights provide the majority of seats,  but international traffic is also increasing. The US is the dominant destination market for international services, accounting for 94% of the departing international seats in 2017. In December 2016, Volaris launched a new link to Denver. It operates the 1,621 kilometre sector with A320s.

Monterrey Airport is one of 13 in Mexico operated by OMA under concession agreements. According to the airport operator, Monterrey is the third largest city in Mexico and one of the most important for commerce and industry. OAG schedule data shows that Monterrey was the fourth largest airport in the country for departing scheduled seats in 2017, behind only Mexico City, Cancún and Guadalajara.

Passenger throughput at Monterrey rose from 6.59 million in 2008 to 9.77 million in 2017, representing an increase of 48%. However, it hasn’t all been plain sailing for the airport over the past 10 years. In 2009, Monterrey saw a significant contraction in traffic, probably due to the global economic downturn. Passenger numbers fell by 21% from 2008 to 2009 with reductions in both domestic and international traffic. Since then, the airport has enjoyed eight consecutive years of passenger growth, although it took until 2014 for figures to return to, and then exceed 2008 levels. Some of the strongest growth has taken place over past four years, with passenger numbers increasing by 52% from 2013 to 2017. 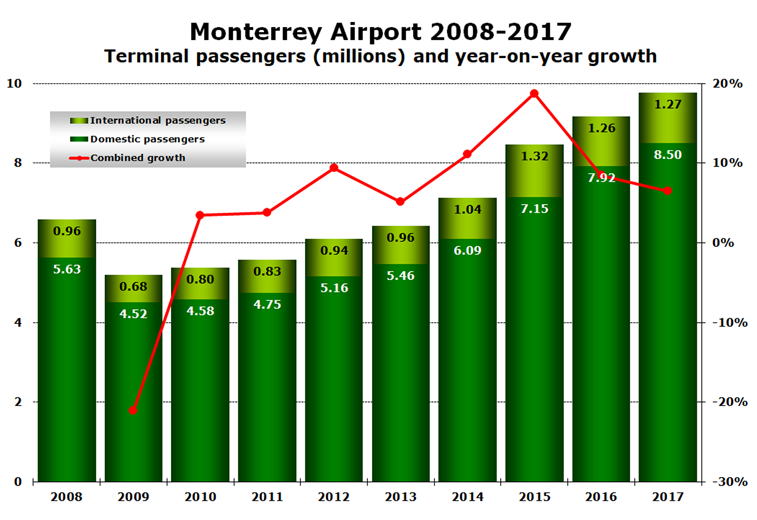 Domestic services rule the roost at Monterrey. In 2008, domestic traffic accounted for 86% of all passengers and although this dropped marginally to 84% in 2015, it has since rebounded to represent 87% of total passengers in 2017. From 2008 to 2017 the number of passengers passing through Monterrey on domestic flights grew from 5.63 million to 8.50 million, an increase of 51%. Over the same period international traffic had risen by one third, from 954,796 to 1.27 million passengers.

Aeromexico lost its crown as the leading capacity provider from Monterrey in 2017, with LCC VivaAerobus pipping the Mexican flag carrier to the top spot. However, the full-service carrier still operated the most flights from the airport in 2017, with its 15,939 departures far outnumbering the 9,345 on offer with VivaAerobus, which had the second-highest amount of flights. In total, 10 carriers offered scheduled services from Monterrey in 2017, although 88% of the departing seats were provided by the four largest operators VivaAerobus, Aeromexico, Interjet and Volaris. The three Mexican LCCs alone accounted for 62% of departing seats. In all, six of the ten airlines serving Monterrey in 2017 were Mexican operators, while the others consisted of the US big three (USB3) and Panamanian carrier Copa Airlines. The largest provider of departing domestic seats in 2017 was VivaAerobus, while the USB3 topped the charts for international capacity, with United Airlines leading the chasing pack. 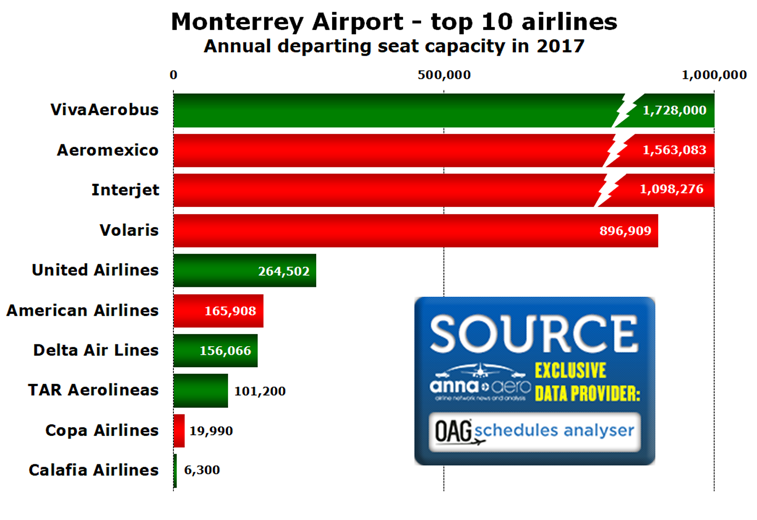 Four of the 10 airlines serving Monterrey increased their departing seats from the airport in 2017, while five cut capacity (highlighted in red) and there was one new entrant. TAR Aerolineas, saw the biggest percentage increase in capacity with seat numbers up 20% compared to 2016, but Delta Air Lines (15%), VivaAerobus (14.6%) and United (13%) also witnessed double-digit growth. Both US carriers increased the seats available on existing links to Monterrey from their home market. All of the operators that cut capacity did so on a marginal basis, with the largest reduction coming from Volaris, which offered 3.3% fewer seats in 2017, after a small decrease in domestic seats. Calafia Airlines was a new airline at Monterrey in 2017 and offers low frequency domestic links with ERJ 145s.

Mexico City is the leading destination from Monterrey, accounting for nearly one third of all departing seats in 2017. During the week commencing 16 Jan 2018, OAG schedules show that there will be 108 combined departures to the capital city airport, operated by four airlines. Domestic destinations accounted for 10 of the top 12 routes from Monterrey in 2017, including the three largest airport pairs. The only international destinations in the top 12 were Houston Intercontinental and Dallas/Fort Worth. 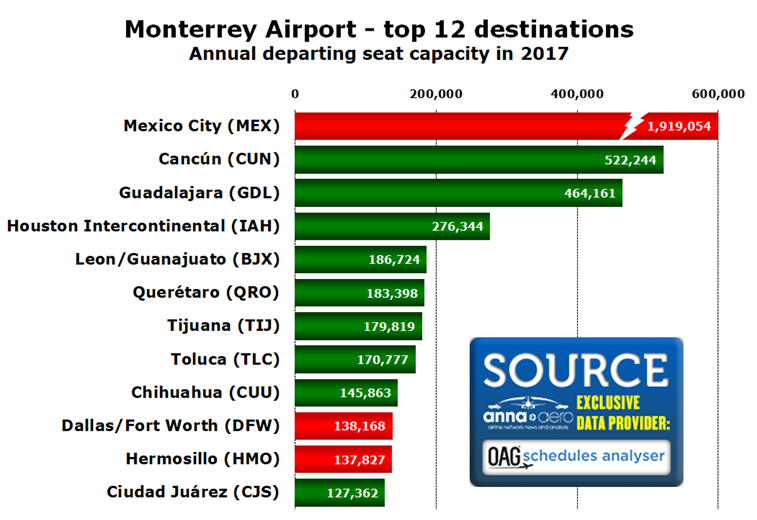 Querétaro and Cancún experienced the strongest growth in seats amongst the top-ranked routes from 2016 to 2017. This was mostly due to capacity increases from existing operators. Despite being by far the largest route, Mexico City witnessed the biggest reduction in seats amongst the top 12 destinations. Seat numbers on the capital city service fell by 8.5% from 2016 to 2017 with Aeromexico, Interjet and Volaris all cutting back their operations on the route. In all, three of the top 12 routes (highlighted in red) saw capacity contract in 2017. The US is the top international market from Monterrey accounting for 94% of the airport’s departing international seats, and 11 of its 14 international routes in 2017. The average sector length on domestic routes from Monterrey in 2017 was 882 kilometres, while the average length for international links was 1,943 kilometres.

Increase in seats per departing flight

The average capacity on departing scheduled flights from Monterrey has been consistently increasing over the past 10 years. In 2008 there were, on average, 92 seats available on each departing service, but by 2017 this had increased to 123 seats per flight. Interestingly, domestic services have a higher average capacity than international links, indicating a wider use of larger aircraft types. The average seats available on domestic flights increased from 94 to 130 from 2008 to 2017. Over the same period, the average capacity on international services rose from 85 to 93. Regional Jets (RJs) operated 80% of the international departures from Monterrey in 2017, with the regional feeder arms of the USB3 carriers deploying RJs, including E175s, on links to major US hubs. Interjet also uses its Sukhoi Superjet 100s on international links. In contrast, larger narrow-body types, including A320s and 737-800s, were more widely deployed on domestic services. Narrow-body aircraft accounted for 60% of domestic departures from Monterrey during 2017. 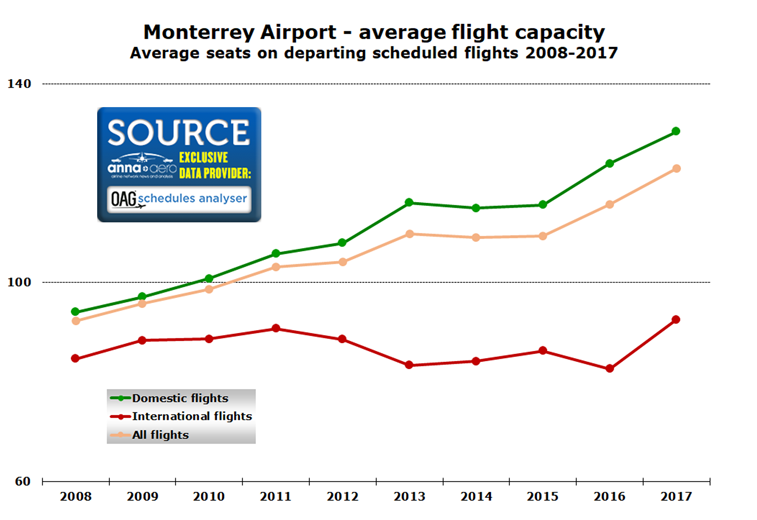 According to anna.aero’s New Routes Database, airlines launched seven new services from Monterrey in 2017. All of these were domestic services launched by LCCs, with the exception of Aeromexico’s new US link to Detroit. We don’t have any new routes on our books from Monterrey for 2018, but keep monitoring our Latest Airline Route News section for up-to-date network developments from Mexico’s fourth largest airport! 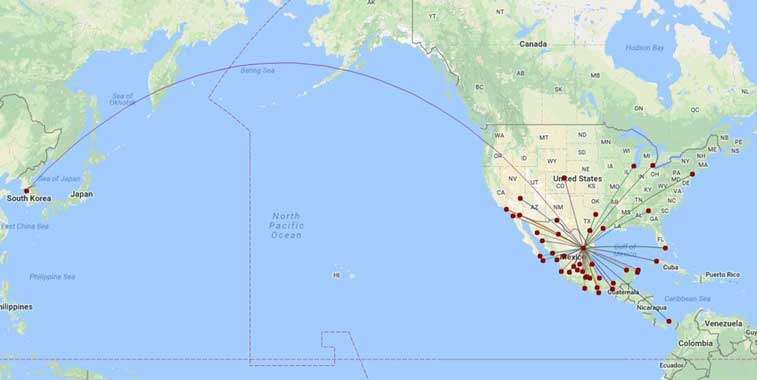 Monterrey Airport’s destination map for the week commencing 16 January shows the emphasis on domestic flights and links to the US. The most recent US link was opened by Aeromexico, when it began serving Detroit in June 2017. Seoul Incheon is the longest sector served and is operated by Aeromexico, but direct flights to the South Korean capital are only available in the outbound direction, with the return service operating to Mexico City.