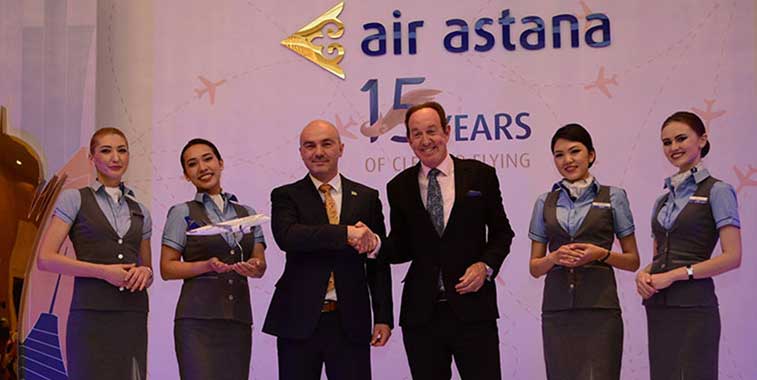 Seat capacity on commercial flights serving Kazakhstan has more than doubled since the turn of the decade. Air Astana is the leading carrier, with the Kazakhstani flag carrier accounting for nearly half of all seats in the market during 2017, including 52% of domestic capacity and 46% of international seats. In June the carrier celebrated the resumption of services between Astana and Kiev.

Kazakhstan is a member of the Commonwealth of Independent States (CIS). According to the United Nations DESA / Population Division, the country’s population increased by about 14% from 2008 to 2017, rising from 16.0 million to 18.2 million. The capacity available on domestic and international flights serving the nation has been keeping pace.

There were nearly 6.50 million seats available on all domestic and international flights serving Kazakhstan in 2008. Like many markets around the world, Kazakhstan saw a cut in available seats in 2009 as the global recession took hold, but since then, the CIS member has enjoyed a strong return to form and a significant expansion of capacity on commercial air services. By 2011, capacity had recovered to, and exceeded, the levels set in 2008. Seat numbers have increased from 6.32 million in 2010 to 12.83 million in 2017, meaning the market has doubled in size in less than a decade. The average capacity on flights serving Kazakhstan decreased slightly from 128 in 2008, to 126 in 2017. On domestic links, the average capacity dropped from 112 to 109 seats from 2008 to 2017, but international services experienced an increase from 144 to 147 seats-per-flight over the same period. 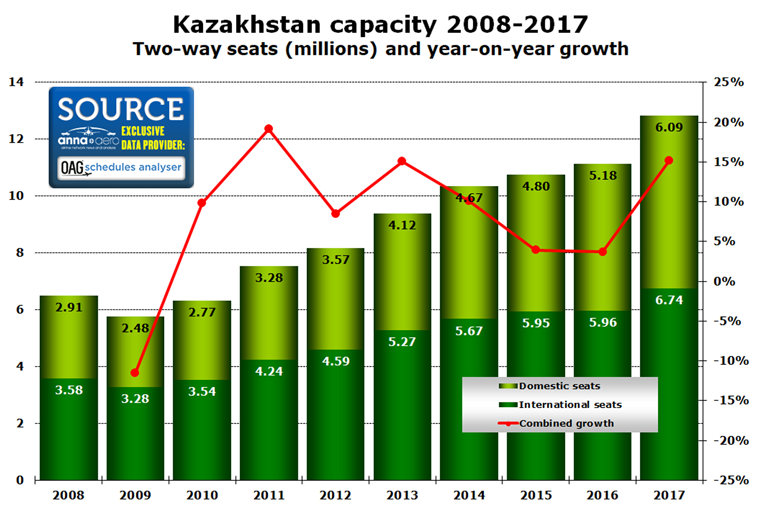 International flights still account for more than half of all seats in the Kazakhstan market, despite domestic services enjoying stronger year-on-year percentage growth across all but one of the past six years. International services accounted for 53% of all two-way seats in 2017, down from 55% in 2008. From 2008 to 2017, domestic seat numbers have more than doubled from 2.91 to 6.09 million, while international capacity increased by 88% from 3.58 to 6.74 million seats.

Air Astana provides half of all seats

Kazakhstan’s flag carrier Air Astana dominates air services in its home country, accounting for 49% of all available seats in 2017. ch-aviation data shows that the Almaty-based operator currently has a fleet of 31 aircraft including E190s, A319s, A320s, A321s, 757s and 767-300s. It was the leading provider of both domestic and international seats in its home market last year. Air Astana accounted for 52% of domestic capacity and 46% of available international seats in 2017. In total, four of the top 12 carriers from 2017 were Kazakhstan-based operators, while another three were from Russia, with two from Turkey and one each from Germany, Ukraine and the UAE. 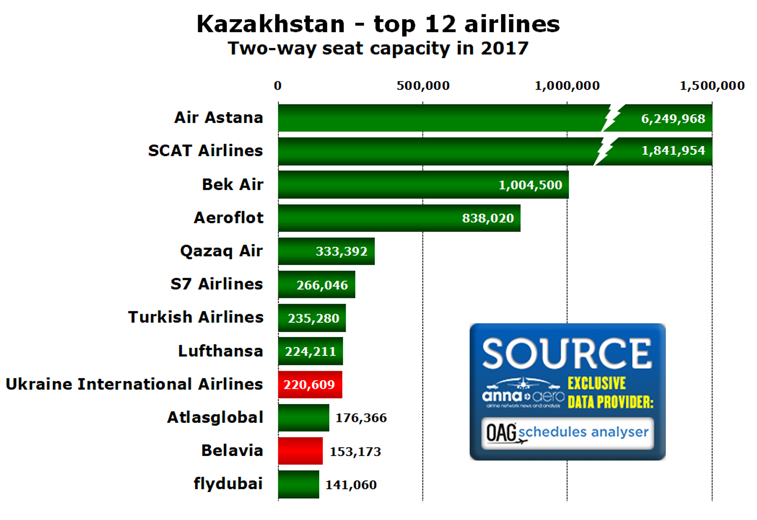 Bek Air deployed the largest increase in seats amongst the top 12 airlines in this market in 2017. The Kazakhstani carrier, which ch-aviation records as operating a fleet of seven Fokker 100s, more than trebled its capacity from 2016 to 2017, offering more than 1.00 million seats, mainly on domestic services. Bek Air increased capacity on existing links but also added new nodes to its network, including a connection between Almaty and Shymkent. Other carriers to see strong growth included Atlasglobal and flydubai which increased their available seats to and from Kazakhstan by 82% and 62% respectively. Two carriers (highlighted in red) experienced cuts on Kazakhstan services, with Ukraine International Airlines witnessing the largest reduction of 15%. OAG schedules show Lufthansa as operating between Almaty and Astana, but these are triangular services connecting Kazakhstan’s largest airports with Frankfurt, and the German carrier does not sell seats on these domestic flights. Even if this capacity is removed from Lufthansa’s total, it would still be the tenth largest seat provider serving Kazakhstan. A notable new entrant to the Kazakhstan market in 2017 was Wizz Air, which launched services from Budapest to Astana.

Almaty and Astana are the largest departure points in Kazakhstan, having accounted for more than two-thirds of all departing seats from the country’s airport’s last year, with the former topping the table. Air Astana operates a significant network of domestic and international routes from both facilities, although Almaty remains its largest base. All of the top 12 airports in Kazakhstan experienced an increase in departing seats from 2016 to 2017 with the strongest growth coming at Uralsk, Kyzylorda and Shymkent, which witnessed respective increases of 66%, 34% and 31%. Uralsk benefited from capacity increases on existing services by SCAT Airlines, Bek Air and Qazaq Air. 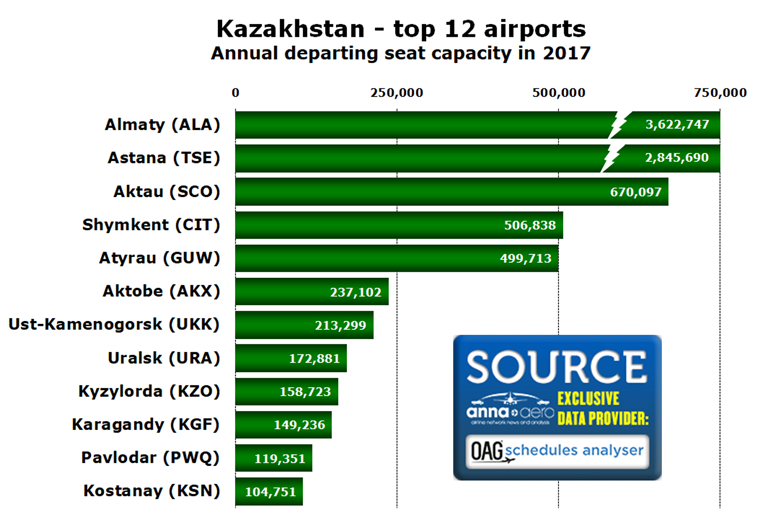 Given their prominence as the leading airports in Kazakhstan, it is not surprising that the top domestic route links Astana to Almaty. One-way capacity from the capital city to the country’s largest airport increased by more than 13% from 2016 to 2017, exceeding 930,000 seats last year. In all, nine of the ten largest domestic airport pairs serve either Astana or Almaty. The one exception is the link between Aktau and Atyrau, which supported just under 100,000 seats in each direction in 2017, making it the seventh largest domestic service.

Russia tops international destinations, but China is on the charge 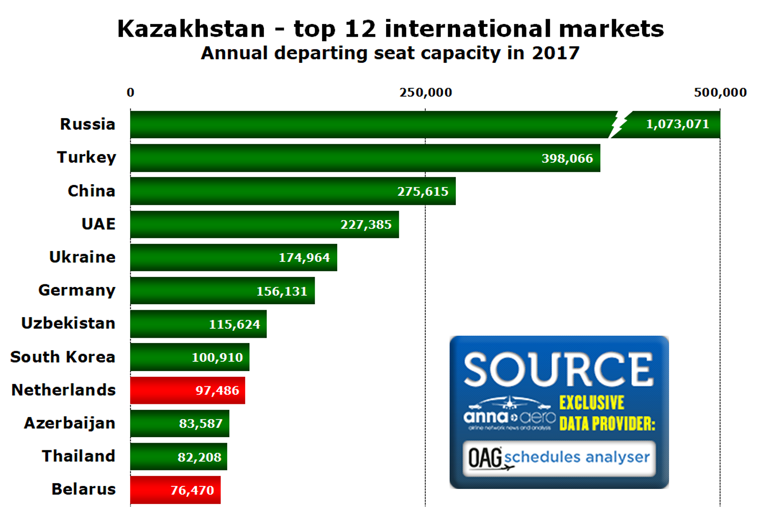 anna.aero’s New Routes Database shows that 31 new links were launched across all airports in Kazakhstan during 2017, 10 of which were domestic. SCAT Airlines launched the most of these services, commencing operations on 13. The Kazakhstani carrier has already announced an additional new route for 2018, with plans to commence operations between Astana and Vilnius from 27 May. The only other new Kazakhstan air services announced for 2018 so far are links from Novosibirsk to Pavlodar with S7 Airlines and from Moscow Sheremetyevo to Kyzylorda with Aeroflot. 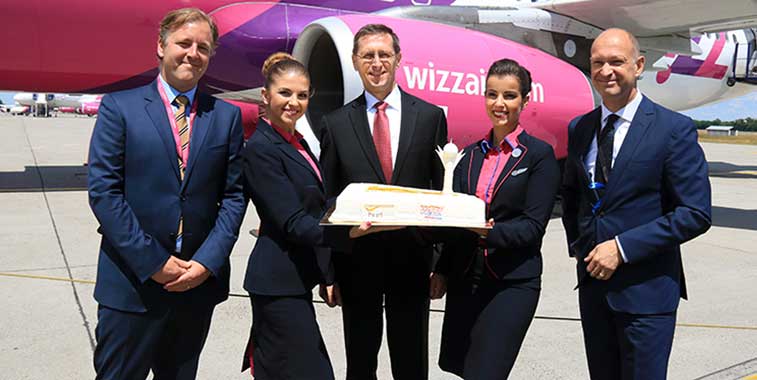 International capacity still accounts for more than half of all seats serving Kazakhstan. The number of seats to or from international destinations increased by 88% from 2008 to 2017. Wizz Air was a new entrant to the Kazakhstan market in 2017 as the ULCC began services on the 3,730-kilometre sector from Budapest to Astana last June.