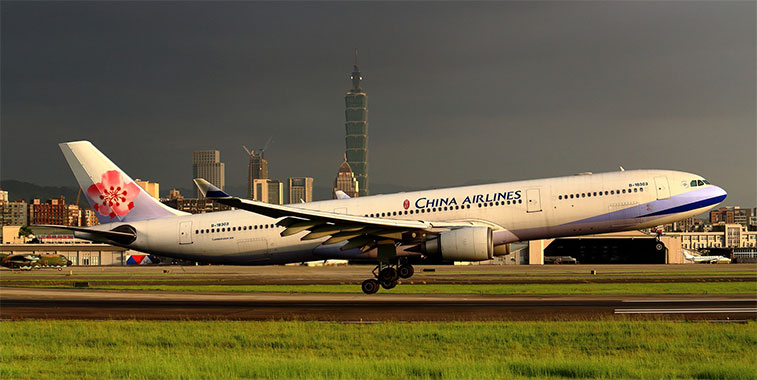 Illustrating just how close Taipei Songshan is to the city’s downtown, with the Taipei 101 skyscraper in the background, the airport was the busiest in Taiwan until its replacement international gateway Chiang Kai-shek (now Taoyuan) opened in 1979. China Airlines is the airport’s fifth largest carrier, but when combined with its regional subsidiary Mandarin Airlines it then becomes #2, behind the united mass of EVA/UNI Air.

Taipei Songshan, was formerly the Taiwanese capital city’s main gateway until 1979, when Taipei Chiang Kai-shek – renamed in September 2006 as Taipei Taoyuan – was opened for commercial operations. Despite the city having a new ‘main’ airport, Songshan was still handling as many as 15.3 million passengers in 1997, a figure which had fallen to 10.1 million in 2001. The airport is still Taiwan’s third busiest, sitting behind Taoyuan, which will handle close to 45 million passengers in 2017, and Kaohsiung which will process around 6.4 million passengers, when final figures for last year are revealed. Songshan now mainly serves charter, domestic and limited international flights to China, South Korea and Japan. It should be noted that part of the airport is still used by the military too.

Six million passenger barrier hard to break and build upon

Looking at Songshan’s traffic profile over the last 10 years, there has been clear progress with passenger volumes rising by 90% since 2008. The provisional figure for 2017 is based on actual traffic up until the end of November, with anna.aero’s data elves then estimating the airport’s final result being around 5.9 million passengers, a 4.0% fall based on 2016 figures. The six million passenger milestone appears to be a real stumbling block for Songshan, have broken it twice in recent years, only to fall back in the following 12-month period. Perhaps the only way for the airport to smash this milestone is with fresh growth impetus from a new or existing carrier. 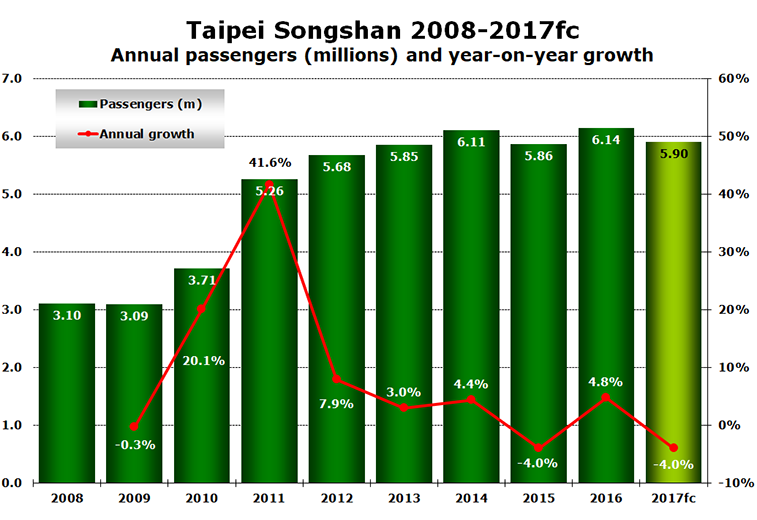 There is a clear spike in the airport’s growth between 2010 and 2011, and much of this can be attributed to it gaining increased international services. According to OAG schedule data, on 1 July 2010, direct flights between Songshan and Shanghai Hongqiao began, with initial services flown by EVA Air, China Airlines, Air China, China Eastern Airlines, Tranasia Airways and Shanghai Airlines. Later in the year, starting on 31 October, EVA Air, China Airlines, Japan Airlines and All Nippon Airways were also permitted to operate twice-daily flights from Songshan to Tokyo Haneda. This was a significant decision as the Japanese hub is now the airport’s most important route in terms of weekly seats (see below).

When using anna.aero’s SVID calculator, the airport delivers a score of 1.18, which gives it an “excellent” rating, based on 2016 monthly traffic, the last full year of passenger data. This sees the Taiwanese facility nestle between Oakland (1.17) and Jaipur (1.21). Comparing this seasonal performance against those of its nearest rivals – Taiwan’s largest airport Taoyuan and second largest Kaohsiung – Songshan does not perform as well, offering a peakier traffic profile than the former (scoring 0.14 or “excellent”), and also behind the latter which similarly managed an “excellent” rating, but with a slightly worse score of 0.68. It should be noted that Taoyuan’s score is the second-best SVID score ever, beaten only by Muscat (0.11) in 2012.

When looking at the 2015 seasonality score of Songshan’s monthly throughput, the airport appears to have taken a backward step, increasing the ‘peakiness’ of its traffic profile. In 2015, the airport achieved an “excellent” rating with a score of 0.60. Evaluating last year’s potential SVID score for Songshan, the anna.aero data elves are predicting further decline in the “excellent ” category, with an anticipated result of around 1.42.

Currently Songshan has a portfolio of 14 serving airlines, all of them being domestic or regional players. The top 12 airlines command 97.8% of weekly capacity at the airport for the week commencing 19 January, up 0.2% on the same period last year. The fastest growing carrier at the airport over the past 12 months is #2 carrier Far Eastern Air Transport (FAT), which has drastically increased its capacity at Songshan by over 370%, up from just 1,800 weekly seats a year ago. With six airlines offering the same seat volumes as they did in January 2017, the carrier performing the largest capacity cull was Sichuan Airlines, which dropped its seats by 9.5%, just ahead of Japan Airlines which trimmed 7.8% from its schedules. 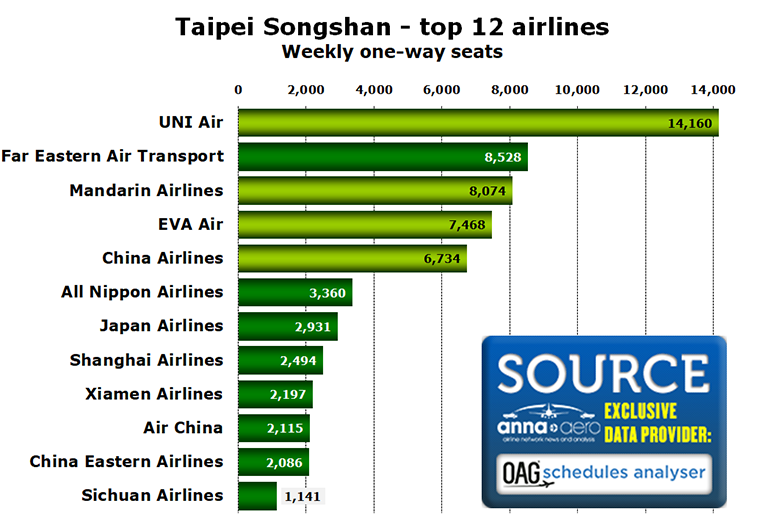 The #1 carrier UNI Air, is a regional subsidiary of EVA Air, while Mandarin Airlines also operates domestic and regional international flights on behalf of its parent China Airlines (all highlighted in light green). If we add parent and daughter company capacity’s together, then EVA/UNI Air offers over 21,600 weekly seats from Songshan, while Mandarin/China Airlines combined provides over 14,800. This gap between the two Taiwanese airline titans is likely to increase as EVA/UNI Air both added to their respective seats at the airport this week versus the same week last year (1.3% up; 8.0% up), whereas Mandarin/China Airlines have both remained flat year-on-year.

A year ago, Songshan provided flights on 17 airport pairs, a figure which has risen up to 20 in January 2018, with the addition of routes to Hangzhou (UNI Air), Wuhan (Mandarin Airlines) and Hefei (FAT) in China. The importance of the airport’s international services are evident in the graph below, as seven of the top 12 routes from Songshan are overseas, with domestic routes highlighted in light green. That said, some of these international routes have had their capacities pared back or maintained since last January, with top-spot holder Haneda down 1.6% and third placed Hongqiao flat (0%). Other overseas destinations have fared much better, with Chongqing growing by 109% and Fuzhou rising by close to 50% in the past 12 months. 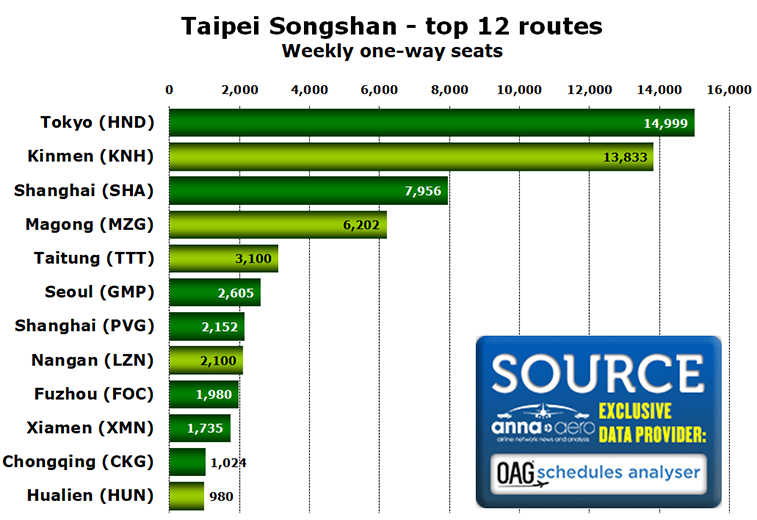 Looking at the domestic sector, it is also a mixed bag in terms of annual capacity movement, with Kinmen rising by an impressive 61%, and Hualien up by 35%, whereas Nangan is down by 9.1% since last January, and Matsu’s seat slashing has seen it drop from Songshan’s top 12 routes altogether. That said, it has been replaced on the leader board by another domestic point Hualien (moving up from last year’s 13th position), with Chengdu also plummeting from 12th place in 2017, and it being replaced by another Chinese city, Chongqing, which was in 15th last year.

Pipeline empty for Songshan, but not for Taipei

While anna.aero’s New Route Database currently has nothing entered for Songshan for the remainder of 2018 and beyond, the same cannot be said across town at Taoyuan. Taipei’s main international gateway will soon be welcoming inaugural flights from China Airlines (Ontario), Mandarin Airlines (Fuzhou), Tigerair Taiwan (Ibaraki, Asahikawa and Iwate-Hanamaki) and Air France (Paris CDG). 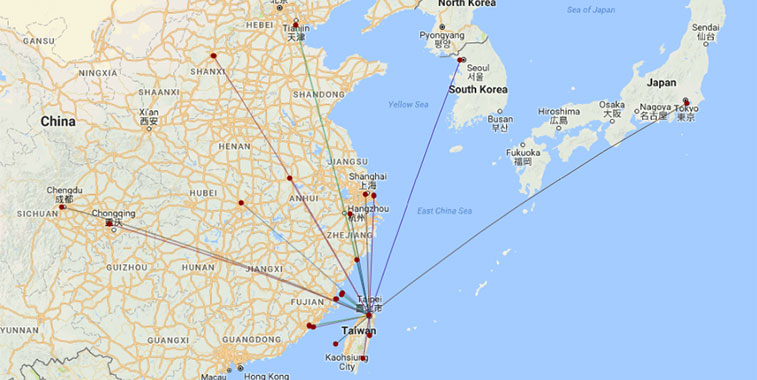 In January 2018, Taipei Songshan offers a network of 20 airport pairs, spread across the domestic market, as well as flights to China, South Korea and Japan. With nearly 15,000 weekly one-way seats to Tokyo Haneda, the Japanese capital is the biggest route from the Taiwanese downtown airport.