Alaska Airlines offering 27 million seats from Seattle-Tacoma; growth rate slows in 2017 as it prepares to open second point in city 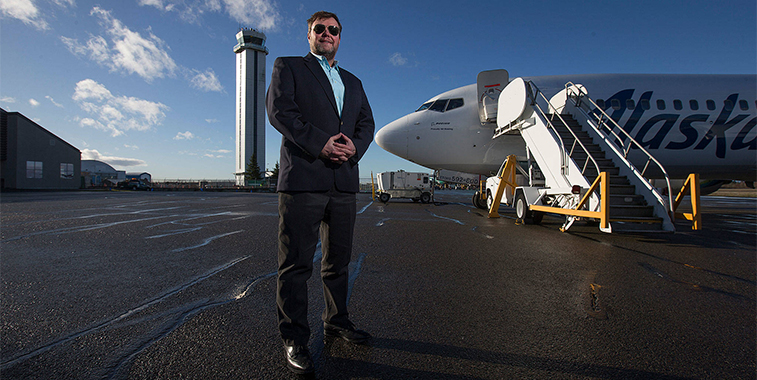 Alaska Airlines’ VP Capacity Planning, John Kirby, stands proud next to one of the airline’s 737-800s at Paine Field this week, with the northern Seattle airport becoming the airline’s second point in the city after Seattle-Tacoma. Already flying over 27 million seats from the latter airport, the airline will start operations from Paine Field in September, initially to eight cities on the US West Coast, all of which will be served on Horizon Air E175s. All eight routes from Paine Field are, not surprising, all included in the carrier’s top 12 routes from Tacoma, with Alaska Airlines offering over 600 weekly departures on the eight city pairs, while 469 weekly services are flown by competing carriers.

Alaska Airlines is the leading carrier at Seattle-Tacoma, with the airline having occupied 50% of departing seat capacity from the airport in 2017 (including Virgin America seats). Behind Alaska Airlines is Delta Air Lines which accounted for 21% of seats, with third-placed Southwest Airlines offering a 6.7% market share. Tacoma is by far the airline’s largest hub, with it being home to 29% of the carrier’s departing seats last year, with the operation at Seattle being 175% larger (in terms of capacity) than its second largest airport Portland, which had 4.82 million departing seats in 2017 versus 13.28 million from Tacoma.

Now over 23 million passengers from Seattle

In 2016 Alaska Airlines, along with Horizon Air, SkyWest and Virgin America operations, flew just over 26.74 million seats from Tacoma, an increase of 8.5% when compared to the 24.63 million it flew from the airport in 2015 (Virgin America was not purchased by Alaska Airlines until 2016). For 2017, the carrier’s capacity from Tacoma is looking a lot more static than in recent years. Alaska Airlines is estimated to increase its 2017 seat offering by 1.9%. However the impact in 2017 comes from Virgin America which posted a 14% reduction in seats on its services from Los Angeles, San Francisco and Dallas Love Field. Nonetheless, while the growth rate has reduced compared to previous years, Alaska Airlines operated 400,000 more seats from Tacoma in 2017 versus 2016. 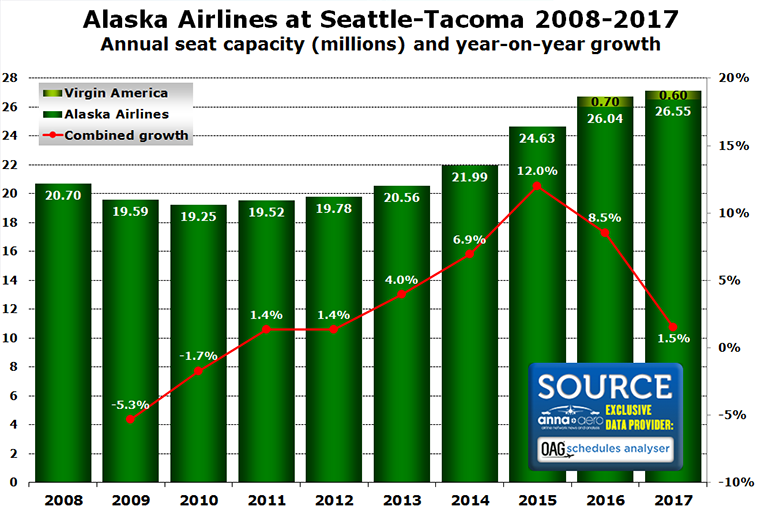 As can be seen in the graph above, Alaska Airlines’ expansion from Seattle has been encouraging in the past few years, with it now offering 7.89 million more seats a year (including affiliate operations) versus its operation in 2010 from the airport, a year which saw the airline offer 19.25 million seats. 2010 was also the last to see the airline posting a reduction in seats, down 1.7% on its offering in 2009. Alaska Airlines currently flies just over 37% of passengers from Seattle Tacoma, with Horizon Air, which operates for the carrier providing 6.1%, SkyWest 1.6% (also includes some Delta and United Airlines operations) and Virgin America 1.1%. Combined, all four carriers will have transported just over 45% of all passengers from Tacoma last year.

Situated 206 kilometres south of Seattle, Portland in Oregon is Alaska Airlines’ number one link from Tacoma, with the airline offering 168 weekly flights on the sector this winter. Of the airline’s top 12 routes from the Washington State hub, the eight that the carrier will fly from Paine Field (highlighted in light green) make it into the top rankings. The four that it will not operate from its second Seattle home include Spokane, Anchorage, Boise and Pasco, with the latter having been the host city for the inaugural Volaire Aviation Consulting Air Service Development Forum, with the company’s next event taking place in Myrtle Beach, South Carolina, between 14 and 16 March. 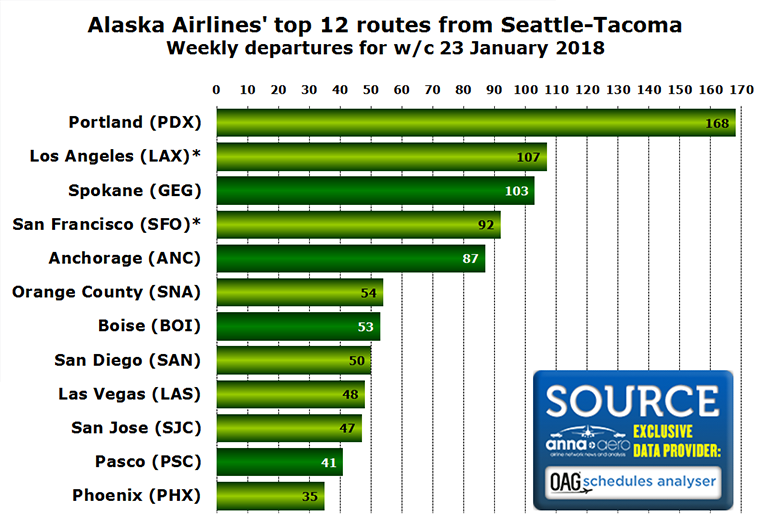 Overall these connections account for 81% of the carrier’s weekly departures from Tacoma, with the airline flying to a further 78 destinations non-stop this winter from the airport according to OAG schedules. Currently there is only one new route planned for 2018 from its largest hub, with this being a link to Pittsburgh.

As stated, in September Alaska Airlines will offer eight routes from Seattle’s Paine Field, with all of the destinations already being flown from Tacoma by the carrier. This winter, Alaska Airlines is offering over 600 weekly flights to the eight destinations it will serve from Paine Field, with 469 competing services also being operated from Tacoma.

Alaska Airlines has stated that it will offer 13 daily flights from Paine Field, with each route seeing at least a daily rotation. Based on current schedules, it is highly likely that those that will see more than a daily service are Portland, given that it is the shortest and most popular sector from Tacoma, Los Angeles and San Francisco, both leading hubs for the carrier following the Virgin America purchase and merger. With 13 daily flights from September on E175s, which are fitted with 76 seats, Alaska Airlines will operate just under 200,000 seats from Paine Field by the end of 2018. This could be enough for the facility to break into the airline’s top 60 airports this year, with Yakima (Alaska Airlines 60th largest airport in 2017) currently offering just under 100,000 annual one-way seats. Paine Field’s ranking is likely to be a lot better in 2019 if the new venture performs as hoped. 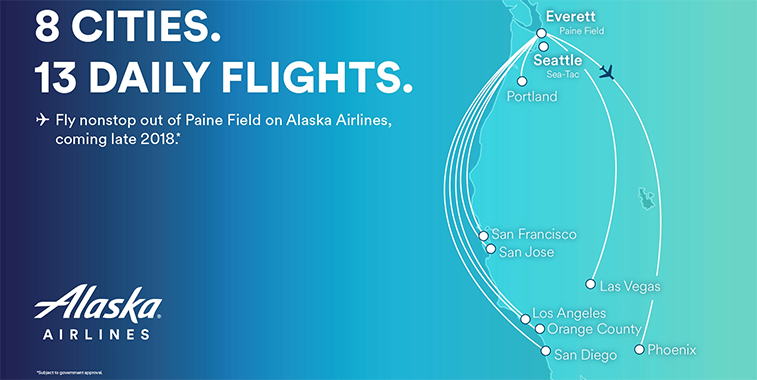 Alaska Airlines has announced that Paine Field will become its second departure point in Seattle, with it opening eight routes from the airport, all of them currently part of the airline’s top 12 routes from Seattle-Tacoma. Launching in September, Alaska Airlines should offer just under 200,000 seats from Paine Field in 2018, allowing it to break into the carrier’s top 60 airports, with the result likely to be lot better in 2019 after its first full-year of operation.