BA in the market for more A380s; Dubai and Phoenix possible new routes with type 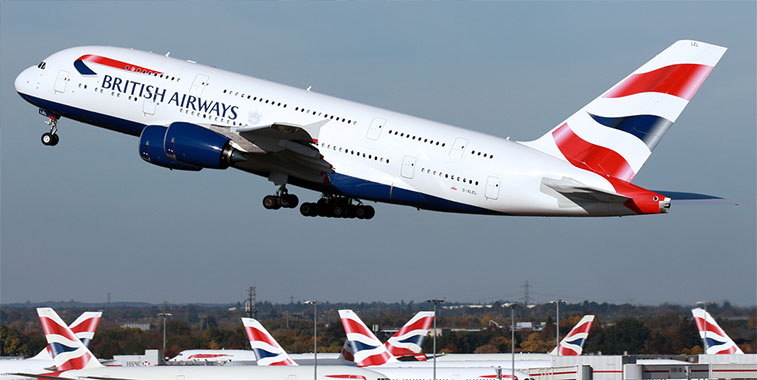 More A380 tailfins could be filling the aprons at British Airways’ London Heathrow hub soon following recent comments from IAG boss Willie Walsh. The oneworld carrier has a fleet of 12 already, which are flown to destinations in Africa, Asia and North America, but where would it use any others, and will Iberia get any?

Following Emirates’ signing of an $16 billion MOU for 20 firm orders and 16 options on the A380 earlier this month, IAG now appears to be taking another look at expanding its 12-strong fleet of the type. “With the new order from Emirates, the issue regarding additional A380s is looking much better for us,” IAG CEO Willie Walsh told an aviation journal. “Now the topic for us is pricing.” So while he haggles over the cost of any new units, we decided to take a look at what BA is currently doing with its heaviest pieces of metal and where an expanded fleet may fly to.

Currently (W17/18) BA flies its A380 fleet to just six destinations in Africa, Asia and North America, offering 45 weekly departures from its London Heathrow hub, according to OAG schedules for week commencing 23 January. While some sectors are year-round A380 staples, like Singapore and Hong Kong, some cities are served seasonally by the behemoth, as this table indicates.

Points to note from the above table include: seven more weekly flights flown by the airline’s 12 A380s during the summer than in the winter; frequencies to Singapore and Hong Kong remain constant year-round; the importance of Johannesburg operations (double-daily) in the winter season; Los Angeles dropping from double-daily A380 operations in S17 to just daily in S18, presumably to allow Chicago to be introduced to this year’s schedule planning.

In terms of where BA could utilise any additional A380s it may first look to upgauge some flights to those destinations it already serves. By looking at S18 schedules for the carrier we can identify where those A380s may well be used on existing city pairs:

Based on this assessment, the airline could easily introduce an extra 85 weekly winter frequencies and 91 frequencies during the summer. Given the current level of flying activity BA performs with its existing A380 fleet, the airline could well accept a doubling or even tripling in its number of units of the type just to cover these additional opportunities on is present network portfolio.

Most of BA’s largest long-haul routes in terms of weekly capacity are already using its A380s to some extent, with eight of the airline’s top nine routes utilising the aircraft. The one unserved A380 route which stands out is New York JFK (highlighted in light green), which is by far and away BA’s largest long-haul airport pair in terms of weekly capacity – double the size of second-placed Boston. With 56 weekly frequencies planned to be operated this summer by the airline’s 747-400 and 777 fleets and presently no A380 services at all, it must be a candidate for some of the fresh A380 capacity. This could happen unless there are operational reasons at the airline’s JFK terminal which does not permit BA to use the aircraft there. The remaining anomaly is Vancouver, which is smaller than the first five destinations in the graph below, with a weekly capacity of 3,283 seats. Why this single daily route attracts the use of an A380 during the summer could be down to the product offered on board matching well with the type of customer using the service. 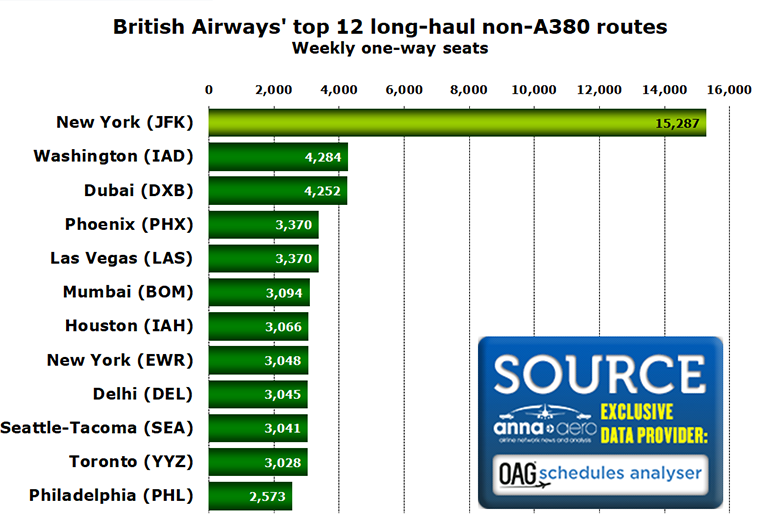 Looking at which routes the airline may consider introducing the A380 onto (should it acquire any more) from a capacity-alone perspective, the 12 routes above would be viewed as the most likely options for BA. Incidentally, the #2 prospective destination, Washington Dulles, was served by the A380 from S14 up until last July. That said the deployment of aircraft types on a particular city pair goes beyond just the number of seats, issues like market performance (is the route growing? can it take additional capacity?), on-board product (is the aircraft configured to match the route’s demand profile?), operational limitations (aircraft payload/range and airport infrastructure performance) and other factors will all be taken into consideration.

BA’s other long-haul base is across London at Gatwick. Currently its top three long-haul destinations in terms of weekly capacity (for S18) from the airport are Orlando (3,727 seats), JFK (2,296) and Tampa (2,062). On this basis, given the scale of the airline’s long-haul flying at Gatwick, it is unlikely that it will position any new A380s there. Undertaking the same analysis for Iberia, there are several potential long-haul routes which could justify the use of A380s, based on S18 capacity. All with 5,026 weekly seats (slightly smaller than BA’s capacity to San Francisco and Chicago, both of which use A380s), Iberia’s services to JFK, Buenos Aires Ezeiza and Mexico City could warrant A380 operations. With 4,928 and 3,590 weekly seats respectively, the Spanish flag carrier’s flights to Miami and Santiago in Chile could also handle the A380’s bulk, with Lima, Bogota and Chicago around the same size as BA’s capacity to Chicago. If IAG does decide to place a follow-on order for A380s and intends to use them on new or existing routes, we will remind you of anna.aero’s predictions.