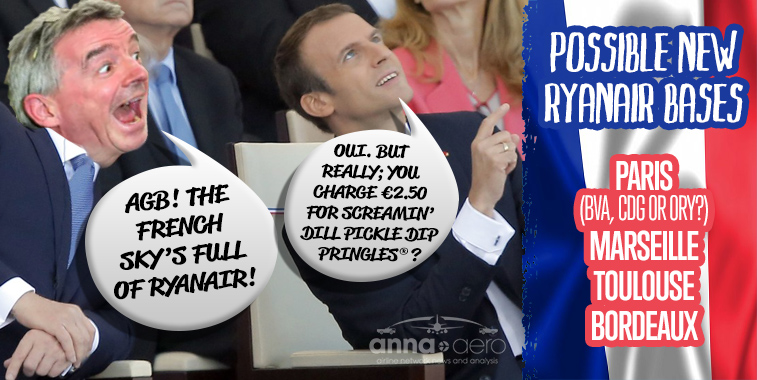 In a press release on 17 January Ryanair indicated that it is considering opening operating bases in France. anna.aero has taken a look at the ULCC’s current operations in the country and considered these alongside its recent approach to network development in an attempt to predict where those first French hubs might be located. Could Paris, Marseille, Toulouse or Bordeaux soon be playing host to the Irish ULCC?

Ryanair’s annual seat capacity has been on an upward curve for many years. Between 2016 and 2017, the Irish operator increased the seats available on its network by 8.6% to 135.24 million. It increased seat numbers by 89% from 2008 to 2017 and served 33 different country markets last year, the vast majority of which are in Europe. On 17 January, alongside the announcement of new W18/19 routes from Paris Beauvais, Marseille, Nantes and Bordeaux, the carrier indicated that it is targeting France for new operating bases in the near future. “We are meeting with a number of airport partners, and this winter 2018 announcement marks the beginning of a larger Ryanair growth initiative in France, which may include aircraft bases,” explained David O’Brien, CCO Ryanair.

No Ryanair bases in France

Ryanair was the leading capacity provider in four of its top 12 markets in 2017 (highlighted in light green in the graph below). It was the second largest capacity provider in Germany, Portugal, Belgium and Morocco, and the third largest in the UK, France and Greece. France was the eighth largest market for Ryanair in 2017, with a similar number of departing seats available to Portugal. Based on 2017 capacity data, France is the largest Ryanair market and the only one in the top 12 to not play host to a Ryanair operating base. anna.aero has described in the past how this was due to disputes with French authorities regarding the interpretation of employment law. The airline appears to be working hard to see if it it can overcome these obstacles with last week’s press release stating that, “Ryanair will engage with worker’s committees/unions to discuss new bases.” 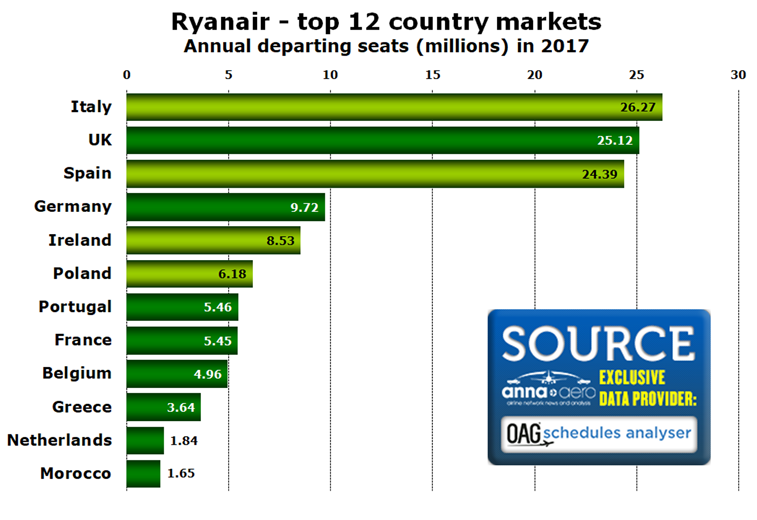 French Connections return to growth in 2017

In 2017 there were 10.47 million two-way seats available on all domestic and international Ryanair flights serving France, representing a 29% increase since 2008. The Irish ULCC increased capacity in the market by 28% from 2008 to 2013, before a period of stagnation and cuts saw seat numbers fall by 5.6% from 2013 to 2016. The airline returned to growth on its French connections last year, with a 6.8% increase in seats. The vast majority of Ryanair’s current network in France is based on international links. Domestic seats accounted for as much as 11% of the carrier’s French capacity in 2010, but by 2017 this had fallen back to just 4.5%. Since 2008, Ryanair has grown the two-way seats available on international services from about 8.03 to 10.00 million, an increase of 25%. During the same period it increased its French domestic capacity from about 100,000 seats to more than 468,000, a growth rate of 366%. 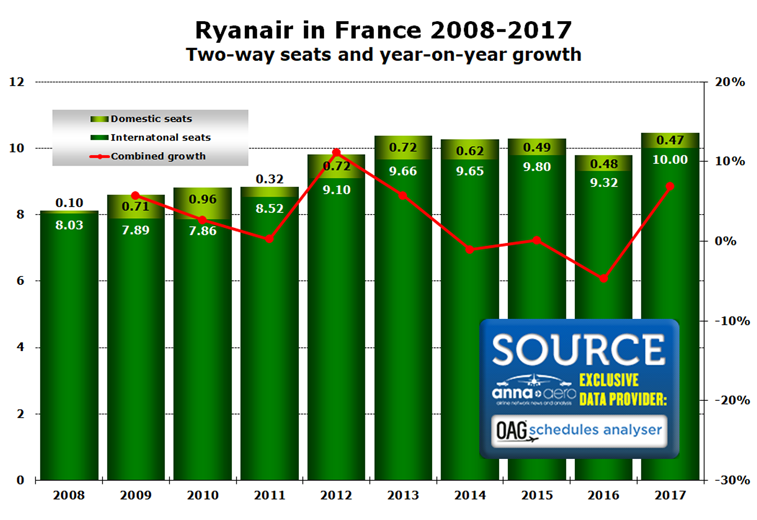 In an effort to predict which French airports Ryanair might be targeting as operating bases we began by identifying the largest nodes in its French network and the most recent new route announcements, to determine where its focus is now and which facilities are experiencing the fastest growth. The airline’s recent press release was also examined for clues.

Paris Beauvais is first in France for Ryanair 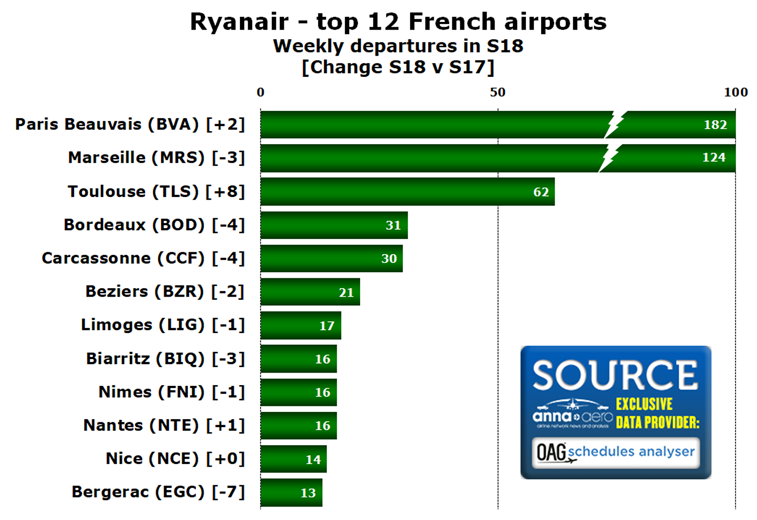 The above graph shows the current departures Ryanair has scheduled from its top 12 French airports during the week commencing 24 July 2018. It reinforces Beauvais’ position as the leading departure point, with the Parisian airport offering 58 more weekly departures than Marseille and nearly three times as many as third-placed Toulouse. This is despite the fact that Beauvais has experienced several years of capacity cuts, with the Irish carrier culling its departing seats from the facility by 22% from 2015 to 2017. The fact that it will offer two additional weekly departures from the airport in S18, compared to the equivalent week in S17, suggests that this decline could level out or even be reversed this year. Some of the strongest growth amongst Ryanair’s top 12 French airports has been experienced at Toulouse and Bordeaux. Toulouse, which wasn’t even served by the airline until 2016, has become the third largest node in the network in the space of two years, with more than 465,000 departing seats available in 2017, and with eight additional weekly departures available this summer, it looks set to continue this upward trend. Bordeaux also saw a healthy 23% increase in Ryanair capacity from 2016 to 2017. 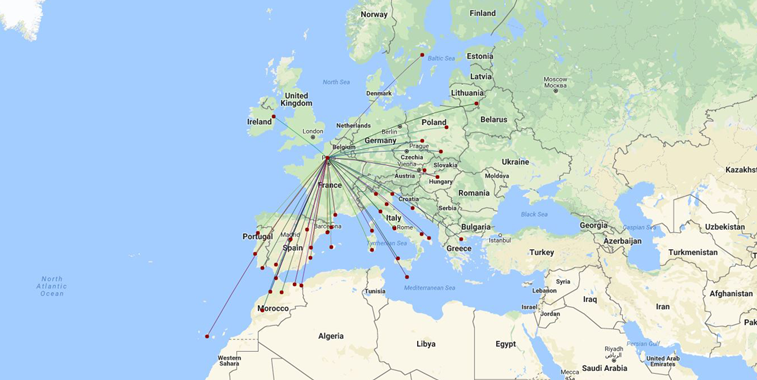 Paris Beauvais is Ryanair’s leading French airport in terms of departing seats and the number of destinations on offer. During the week commencing 24 July 2018 the carrier will provide 182 flights from the Parisian facility, 58 more than its next largest operation in Marseille. Toulouse and Bordeaux make up the airline’s current top four airports in France.

An analysis of Ryanair route launches to French airports in 2017, combined with those already announced for the coming year, reveals some familiar faces dominating the scene. In 2017 Toulouse saw the most new services launched with five, followed by Marseille with three. For 2018, Beauvais and Marseille have the largest number of new routes announced so far with three each. Of the 10 new routes revealed by Ryanair on 17 January, anna.aero has calculated that only six are really new, while the other four are a continuation of summer services throughout the W18/19 schedule. These are the links from Beauvais to Bratislava and Thessaloniki, from Marseille to Faro and from Nantes to Seville, which have all subsequently been disregarded as new services in this analysis.

Ryanair’s press release does not indicate how many potential bases the airline might be considering in France, referring only to the possibility of opening a number of bases at regional airports. We have therefore decided to highlight the three or four most likely candidates. The most logical step in this process would be to start with the airports with the best combination of current capacity, recent growth and new route additions. Working on this basis, Beauvais, Marseille and Toulouse seem the most obvious candidates, with Bordeaux the next most likely contender. However, the airline’s press release indicates its strategists could be preparing to introduce a curve ball with the introduction of a currently unserved airport in the French capital. It quotes O’Brien as saying,”We urge the Government to sell Charles De Gaulle and Paris Orly airports to separate bidders, which will introduce much needed competition into Paris for the benefit of French citizens, visitors and workers,” This could suggest the Irish operator is interested in opening a base at one the two main Paris airports.

The airline has form in this regard. In recent years it has begun operating from more primary airports, which in some cases are in close proximity to secondary, out-of-town facilities that previously dominated the operator’s network in certain regions. Examples include Glasgow Airport, which has superseded Prestwick as the carrier’s main base serving the Scottish city, and more recently Frankfurt, which now overshadows the ULCC’s long running base at Frankfurt Hahn. Could the same situation now occur in Paris, with Beauvais eventually being superseded by Paris CDG or Paris Orly? If Ryanair did move into one of the two larger airports, its facility of choice might be open to conjecture. The carrier would face LCC competition at both airports with easyJet having a presence at each one. Ultimately the decision might come down to where it could get the best deal – hard when they are both owned by the same company. Whatever happens, it seems likely that if Ryanair opens bases in France, Paris will play host to one and, depending on the negotiations, that could still start with Beauvais. History shows that if Ryanair does move into Paris CDG or Orly, Beauvais stands a good chance of maintaining some level of service, with both Prestwick and Hahn continuing to offer the carrier’s flights, even after its head was turned by neighbour airports. 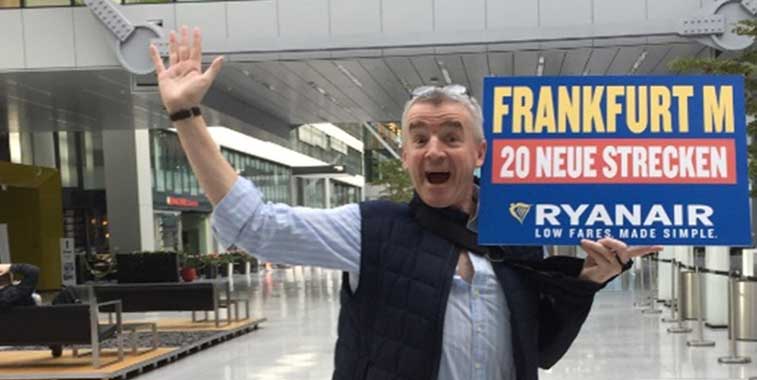 In the event that Ryanair opens bases in France, Paris is likely to be a priority location. In its press release from 17 January, the Irish carrier talked about the need to sell Paris’ two main airports, CDG and Orly, to separate bidders to increase competition. This could indicate the airline is interested in operating from one of those facilities, despite Beauvais being its largest airport in France.  It has recent form in this regard, moving its focus towards more primary airports. In 2017 it opened a base at Frankfurt after years of focusing on the secondary facility at Frankfurt Hahn.