Tbilisi-Copenhagen is “Skyscanner Unserved Route of the Week” with 32,000 searches; Georgian Airways’ next growth sector?

Tbilisi to Copenhagen is just one of the new route opportunities that Dea Matchavariani, Business Development Manager, United Airports of Georgia will be discussing next month at the CONNECT international route development forum. Other unserved top routes from the Georgian capital include Brussels, Lisbon, Madrid, Oslo, Stockholm and Tallinn, as well many opportunities to be discovered from Kutaisi.

With nearly 32,000 searches in the last 12 months, a potential city pair from Tbilisi to Copenhagen has been identified as this week’s “Skyscanner-anna.aero Unserved Route of Week” – a powerful analysis based on aspirational data captured from the Skyscanner.net flight comparison site used by +60 million unique visitors per month. The Georgian capital will be the host city for the CONNECT route development event, which takes place between 20-22 February. 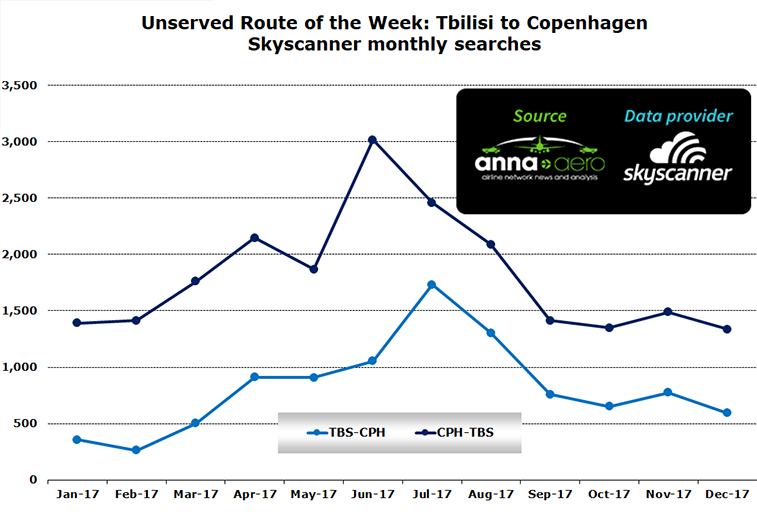 anna.aero thinks SAS or Georgian Airways should take a hit at this route

Skyscanner demand on this week’s unserved route shows a preference towards the Copenhagen end of the city pair, with a 69/31 split, so on this basis we looked at potential carriers at the Danish origin first. According to OAG schedules for the week commencing 18 January, the largest carrier at Copenhagen is SAS (37% share of weekly seats). The airline’s 58 point non-stop route network from the Danish airport presently consists of eight East European destinations, including Gdansk (served 22 times weekly), Vilnius (16), Palanga (11), Riga, Tallinn, Warsaw Chopin (all 10 times weekly), Wroclaw and Poznan (both five times weekly). While the full-service carrier (FSC) is currently not a big player in the Caucasus region of Eastern Europe, in addition to point-to-point travellers it could draw traffic from across Scandinavia via its Copenhagen hub onto a potential Tbilisi sector. Indeed, the Georgian capital is not served from any of the region’s big hubs – namely Stockholm Arlanda, Oslo Gardermoen or Helsinki – so there is an opportunity to be a focal point for all Scandinavian traffic to Tbilisi.

Of Copenhagen’s 56 serving airlines, and behind SAS in #2 spot, is Norwegian (19% share of seats), which like its nemesis presently has a small East European network linking the Danish capital to Budapest (five times weekly), Prague and Riga (both four times weekly), Krakow (three) and Zagreb (weekly). While its total network in Eastern Europe region is broader than that of SAS, offering 14 destinations from all of its departure points compared to nine from the FSC, its business is more reliant on pure point-to-point traffic, although it does sell connecting flights, so therefore it is less likely to be able to draw on potential passengers from across Scandinavia to fill its flights unlike its competitor.

Contemplating the Georgian end of the route, the airport’s #1 capacity provider of its current 29 serving airlines is Georgian Airways, which offers 16% of weekly seats. However, this market share figure is set to rise significantly in 2018 as the flag carrier is in expansion mode. With routes to Berlin Schönefeld (to be served three times weekly), Barcelona, Bratislava, Brussels, Cologne Bonn, Düsseldorf, Paris CDG, Bologna and Kazan (all to be served twice-weekly), as well as Athens and Thessaloniki (both twice-weekly), with the Greek cities having been announced earlier this month. The airline is clearly keen on adding more points to its network, and on this basis, the country’s flag carrier is the most likely to consider a new route to Denmark’s busiest airport from the Georgian end, especially given this compelling Skyscanner data.

When looking at the previous year of search data (graph above), the busiest month for potential traffic flows (from Tbilisi) is July 2017, with nearly 4,200 searches, while the quietest month was February 2017 (1,700 searches). Given the anticipated booking profile of the route – short-haul business – 80% of travellers on this potential sector will be wanting to book in the last month before departure, so this would seem to indicate that the busiest month for traffic will be August, with the seasonal low being in March. Using the same methodology for the Copenhagen end of the sector, the peak month for traffic will be July, with the yearly low being January.

According to OAG Traffic Analyser, because there is no direct service, the top three connecting options chosen by those passengers who did book travel between Tbilisi and Copenhagen in the last 12 months (year ending November 2017) indicates that the majority of connecting travellers used Istanbul Atatürk (35%), Riga (25%) and Istanbul Sabiha Gökçen (14%). Looking at the traffic flows in the opposite direction (from the Danish end) the same three airports are top again, however with Atatürk falling to 27%, Riga still at 25% and Sabiha Gökçen up to 16%. 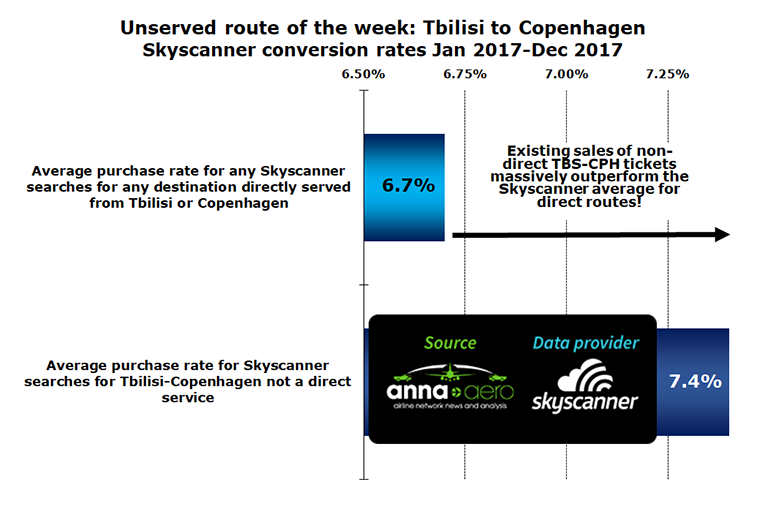 With a lack of direct services, travellers between these two cities have clearly got used to these one-stop alternatives. However, the market demand is extremely buoyant – as the graph above shows, with 7.4% of the Skyscanner searches for these indirect Tbilisi to Copenhagen services converted into ticket sales – that’s more than the average 6.7% achieved for Skyscanner conversion/purchase rates for all direct routes available from either Tbilisi or Copenhagen. However, with over 32,000 annual searches, a twice-weekly service should be immediately viable for the airline potentially looking to start this potential city pair.