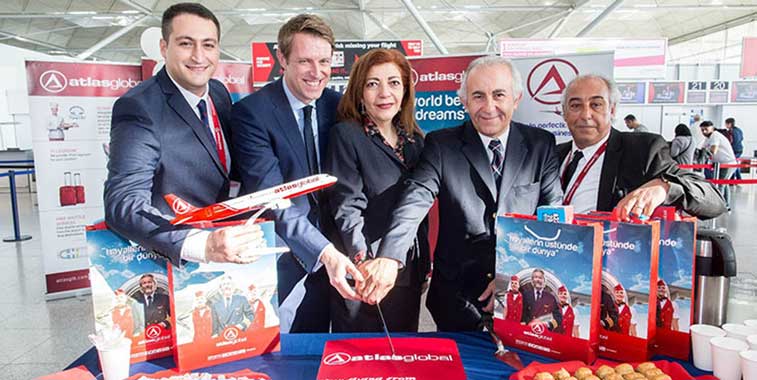 The UK-Turkey market experienced two consecutive years of capacity cuts in 2016 and 2017 with the number of available seats falling by 19% from 2015 to 2017. The terror attacks that took place in Turkey are likely to be the main cause of this drop off. It isn’t all doom and gloom however. London Stansted saw its capacity in the market increase by more than 40% last year. One carrier serving Stansted is Atlasglobal. The Turkish carrier celebrated its return to the Essex airport in late 2016.

The number of seats available between the UK and Turkey grew from 2.11 million in 2008 to 5.29 million in 2017, representing an 151% increase. During the same period, the average capacity on departing flights between the two countries increased from 183 seats to 203. More than 80% of services in this market are operated by narrow-body types. The average number of seats on narrow-body-operated flights increased from 171 seats to 189 seats from 2008 to 2017, as airlines focused their attention around the A321, A320 and 737-800. Turkish Airlines accounted for 90% of all wide-body flights between its home market and the UK in 2017, deploying 777-300s or various A330 series aircraft on more than 2,200 sectors.

Despite the growth experienced between the UK and Turkey since 2008, the market has been in decline recently. There was rapid expansion from 2008 to 2010, during which period capacity more than doubled from 2.11 to 4.61 million seats. Expansion continued over the next five years, with the number of available seats rising by 41% to 6.50 million in 2015. Since then, airlines have been removing capacity from the market, cutting seats by 19% from 2015 to 2017. A number of factors are likely to have contributed to this contraction including a wave of terror attacks in Turkey during 2016 and 2017, and the political unrest in the country that culminated in a failed coup in 2016. Early indications for 2018 are that consumer confidence is returning and that this could be the year the market returns to growth. Seat capacity for a typical peak summer week (commencing 31 July) is up 16% this year compared to the equivalent week in 2017. 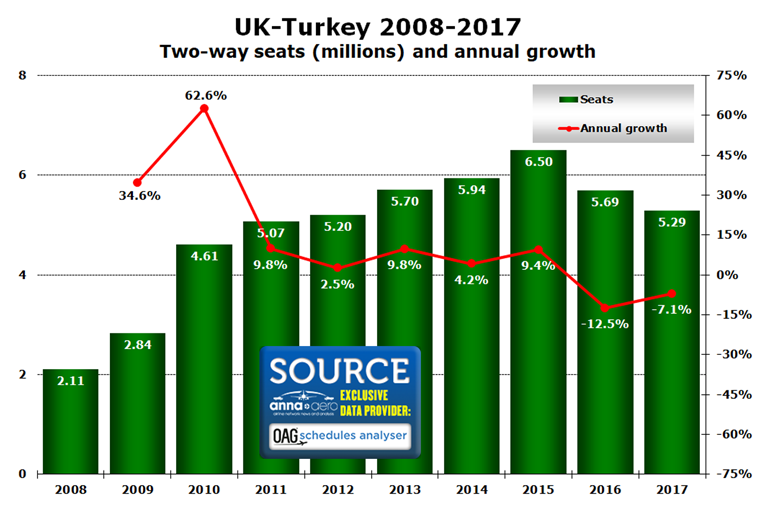 Scheduled flights were operated from 25 airports on sectors between the UK and Turkey during 2017. Only six Turkish airports had UK connections last year, compared to 19 British departure points. This disparity is partly due to the number of UK regional airports with low frequency, summer-only links to Turkey’s main tourist hot spots. This analysis considers there to be four main hubs in this market, namely London Heathrow and London Gatwick in the UK and Istanbul Atatürk and Istanbul Sabiha Gökçen in Turkey. Together, these four hubs represented three of four largest departure points between the UK and Turkey in 2017 and nearly half of all departing seats. The largest route in the market last year was the link between the two biggest hubs, Heathrow and Atatürk, which accounted for nearly one-quarter of all available seats between the two countries, despite a 5.6% reduction in capacity compared to the previous year.

The top 12 airports for departing seats in the UK-Turkey market included six from each country in 2017. Many airports suffered capacity cuts compared to 2016 (highlighted in red) but it was not all doom and gloom. Four of the top 12 departure points experienced a year-on-year increase in departing seats with the strongest growth coming at London Stansted. The Essex airport enjoyed a 44% boost in seats on services to Turkey with Atlasglobal, Pegasus Airlines, Thomas Cook Airlines and TUI Airways all increasing their available capacity and Jet2.com beginning operations from London’s third airport for the first time. Atlasglobal increased capacity on its link from Atatürk to Stansted by 467% from 2016 to 2017, while Jet2.com introduced links to Antalya and Dalaman. Elsewhere, Antalya and Izmir enjoyed 7.9% and 5.4% respective increases in departing seats. The largest capacity cuts amongst the top 12 airports came at Edinburgh and Bodrum which experienced 26% and 25% reductions respectively in 2017. 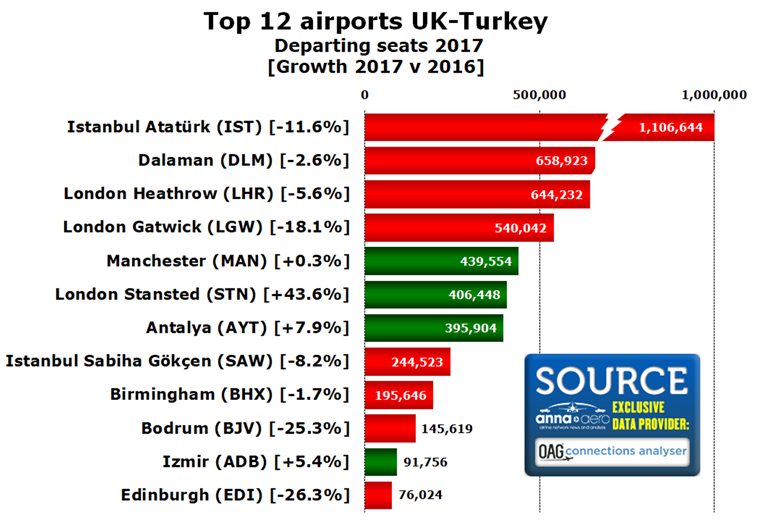 The four main hub airports accounted for about 2.54 million departing seats between the UK and Turkey in 2017, equivalent to 48% of the overall market. Over the past 10 years, non-hub facilities have had a strong influence on this country pairing. From 2008 to 2010 the capacity provided by the four hubs increased by 38% but this paled in comparison to the 220% increase from other airports. This led to non-hubs accounting for 65% of all departing seats in the UK-Turkey market in 2010 and 2011. By 2017 this had fallen back to a 52% share of the market, with the non-hubs taking a particularly heavy hit to available seats in 2016. From 2015 to 2017 the capacity available between the UK and Turkey from non-hubs fell by 26% compared to an 8.6% reduction from the four hubs. 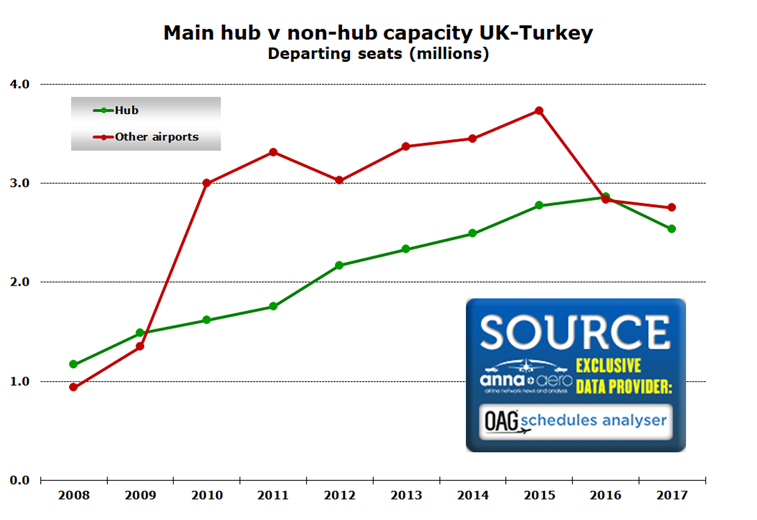 Scheduled services were provided by 11 airlines in the UK-Turkey market during 2017. Turkish Airlines is by far the largest operator between the UK and its home country, providing more than one-third of all seats in this segment in 2017. Turkey’s national carrier serves Birmingham, Edinburgh, Gatwick, Heathrow and Manchester from Atatürk, while also connecting Gatwick with Sabiha Gökçen. Only three airlines offered more seats in the market during 2017 than in the previous year. Freebird Airlines was new to the market, while the largest capacity increase came from SunExpress, albeit from a small base. Thomas Cook added 20% more seats, despite discontinuing a number of routes. The UK-based leisure carrier significantly increased capacity on a number of existing services, adding 69% more seats from Stansted to Antalya, 62% more from Manchester to Dalaman and 53% more from Manchester to Antalya. 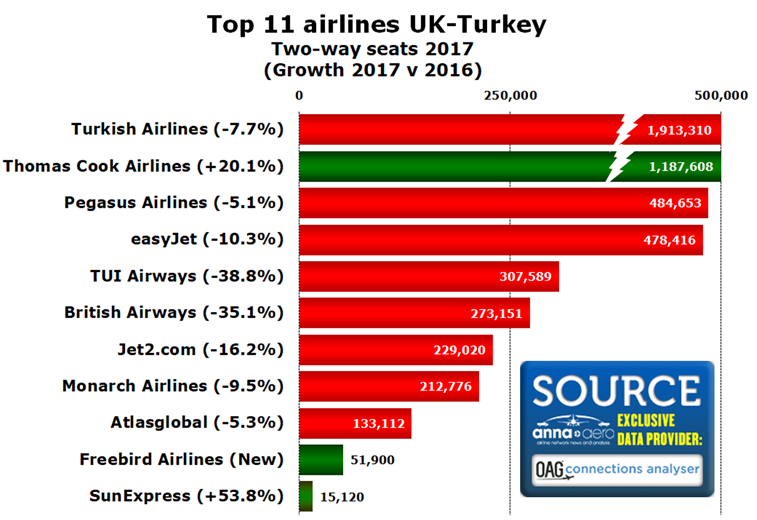 Eight of the 11 airlines cut capacity between the UK and Turkey in 2017, with TUI and British Airways chopping the most seats. TUI removed a number of services from its network for 2017 including six links to Dalaman and two to Antalya. In 2018 the market will be without Monarch Airlines, which offered more than 200,000 seats last year, before ceasing operations in October.

anna.aero’s New Routes database shows that three new routes were introduced between the UK and Turkey during 2017, with all of them serving Stansted. We have counted 31 new routes that have already been announced for 2018, including 11 each from Jet2.com and Thomas Cook. This reinforces the belief that positive growth is about to return to the market. 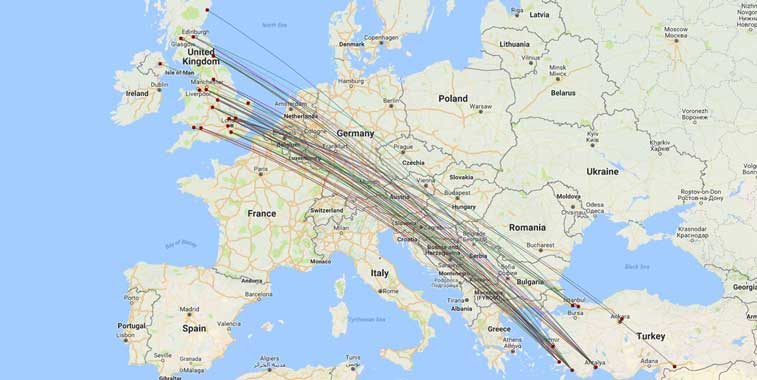 The route map for UK-Turkey services for the week commencing 31 July 2018 shows that there are more origin points at the UK end of the market. In addition to year-round links from the larger hubs, some UK regional airports still support low frequency, summer-only services to Turkish holiday hot spots. Early indications are that the UK-Turkey market will return to growth in 2018 with weekly seat numbers up 16% for a typical week in S18.