Abuja traffic looks set to decline further in 2017 due to capacity cuts, having hit a peak of 4.3 million passengers in 2015; Emirates returns 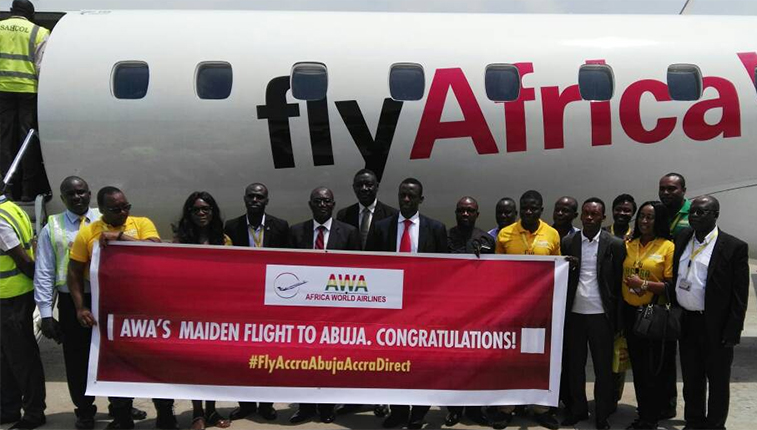 Africa World Airlines was a new carrier to Abuja in 2017, starting a daily link from Accra on 26 June. While the connection was greatly welcomed at Abuja, the airport posted a decrease in seat capacity last year of 3.2%, while passenger traffic fell 1.5% in 2016, a result coming after three years of consecutive growth. With capacity down in 2017, it’s likely that passenger numbers will have dropped for a second year in a row, and potentially at an enhanced rate versus 2016.

Abuja is one of, if not the fastest growing cities in the world. In 2006 the city’s core area had a population of over 776,000 people according to the Nigerian census of that year, but in 2016 it is estimated to be roughly around 1.8 to two million people, representing a rise somewhere between 132% and 158%. As of 2016, the metropolitan area of Abuja is estimated to be roughly six million people, placing it behind Lagos as the second most populous metro area in Nigeria. This gargantuan growth has been a benefit to the city’s airport – Nnamdi Azikiwe International – which between 2006 and 2011 saw traffic double from 2.01 million to 4.22 million, resulting in an average increase in annual traffic for that period of 22%. However, since this surge, numbers at the gateway to Nigeria’s capital have steadily dropped.

Having hit a peak of 4.30 million passengers in 2015, Abuja’s traffic numbers fell to 4.23 million in 2016, a fall of 1.5%. An analysis of OAG schedules for 2017 indicates that annual seat capacity from Abuja declined 3.2% versus the offering the year before, suggesting that traffic numbers will have fallen further last year. Another factor which will likely impact the traffic result is due to the airport being closed for a number of weeks at the start of 2017 for essential runway repairs. Based on the last year when anna.aero was able to obtain full passenger data (2016), and analysing the result against the annual seat offering from Abuja that year, the airport posted an average theoretical load factor of around 82%. 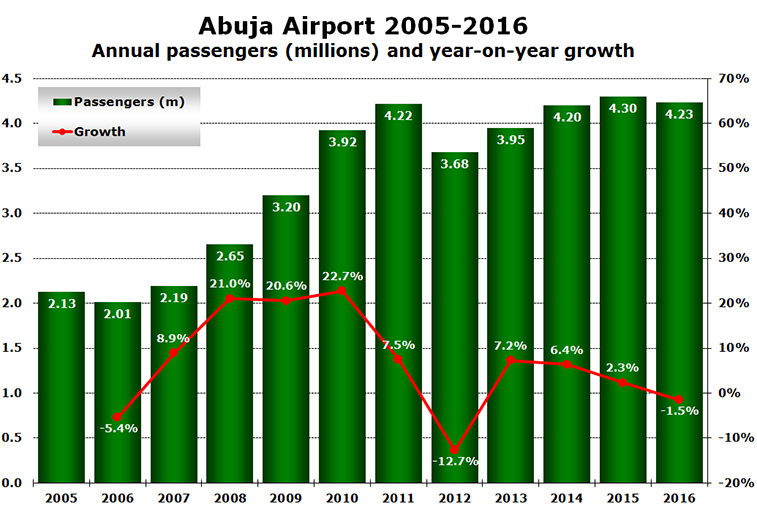 Of the 4.23 million passengers in 2016 to pass through Abuja, 885,926 of those travelled on international services, with this sector accounting for 21% of traffic that year. However, it would appear that non-domestic services saw the biggest cut in traffic between 2015 and 2016, with demand falling 7.2% from over 954,466 passengers. In the domestic sector, traffic actually rose during the last two years of the period analysed, albeit by only 0.1%.

Various reports in local Nigerian media suggest that in 2017, only 11.22 million passengers passed through Nigeria’s airports, a result which would confirm that passenger traffic fell in the nation by a mighty 26% last year when compared to 2016, a year which saw 15.23 million people travel to/from and within Nigeria. Of the total passengers greeted in Nigeria during 2016, 28% of them passed through Abuja.

Given that Lagos is the largest city in Nigeria, it is no surprise to see that the link from Abuja is the leading route from the airport, with the sector accounting for 38% of departing seat capacity from the capital in 2017. While it is the premier connection, the seat offering between the two cities in 2017 decreased by 2.6% versus 2016, with Abuja’s second most popular connection – Port Harcourt – seeing a 27% cut in capacity, a trend that appears to have come across many of Abuja’s services last year. As can be seen in the graph below, most of Abuja’s top routes are to domestic airports, with four (highlighted in light green) being international services, with them all being to leading hubs for Ethiopian Airlines (Addis Ababa), British Airways (London Heathrow), Lufthansa (Frankfurt) and Turkish Airlines (Istanbul Atatürk). 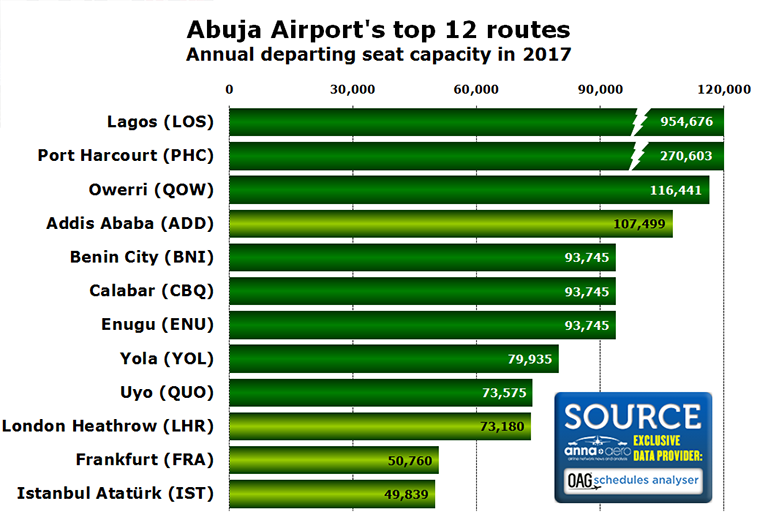 Arik Air is the star performer despite seat slump

Arik Air was Abuja’s leading airline in 2017, with it operating just under one third of all seats from the airport last year. Although it is the #1 carrier from the capital, its seat capacity at Abuja dropped 21% between 2016 and 2017. Second to Arik Air is Air Peace, a carrier which only started operating from Abuja towards the end of 2016, and now links Nigeria’s capital to Benin City, Calabar, Enugu, Lagos, Port Harcourt and Owerri this winter, offering 68 weekly departures. It should be noted that Air France and Lufthansa (both highlighted in light green) do offer more seats from Abuja as stated in the graph, however the airlines’ departures to Lagos on their triangular services from Frankfurt and Paris CDG respectively are not bookable from the capital, and those seats have therefore been taken out of this analysis. With that, it means that British Airways is the leading long-haul airline from Abuja with regards to available seats that can be booked. 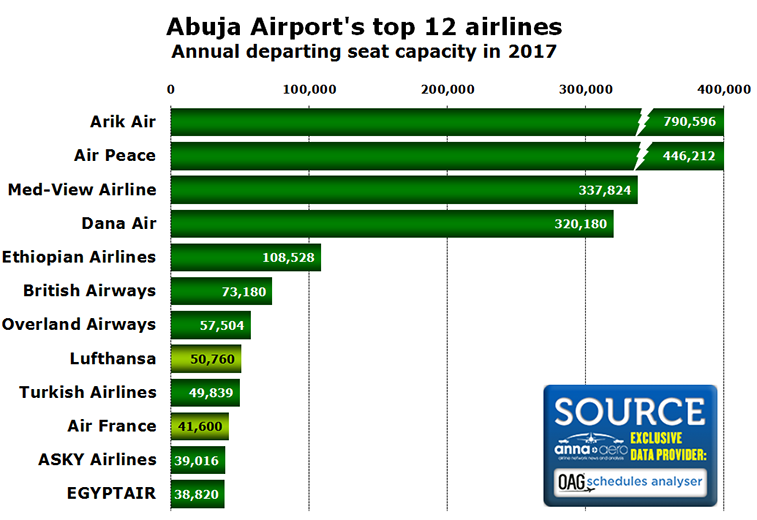 A big coup for Abuja in 2017 was the return of Emirates, with it ending its one-year hiatus of flights from Dubai, with the carrier connecting the capital to its UAE mega-hub four times weekly on its 777-300s. The airline originally began serving Abuja on 1 August 2014, offering a daily link on the 5,383-kilometre sector. Along with the return of Emirates, a further two carrier’s have entered Abuja in the last year. Africa World Airlines commenced flights from Accra on 26 June, while Aero Nigeria, an airline offering scheduled passenger services to various Nigerian domestic airports and international destinations in the West African sub-region, started flights to Lagos, Port Harcourt and Sokoto on 31 July using a mixture of its 737-400s and Q400s. 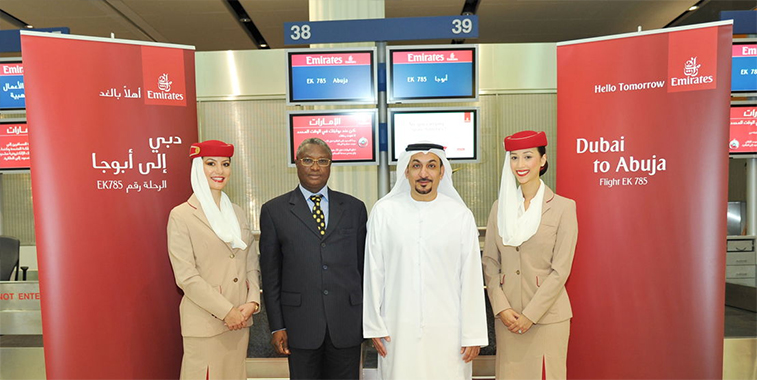 Emirates originally launched daily flights to Abuja on 1 August 2014, but cut services at the end of 2016, before returning to Nigeria’s capital in December. The carrier is offering a four times weekly link to its mega-hub on its 777-300s second time around. Along with Emirates, Africa World Airlines and Aero Nigeria added Abuja flights in 2017.