Capacity between India and Sri Lanka grew 17% last year; Chennai and Bengaluru are the fastest-growing links as IndiGo enters the market 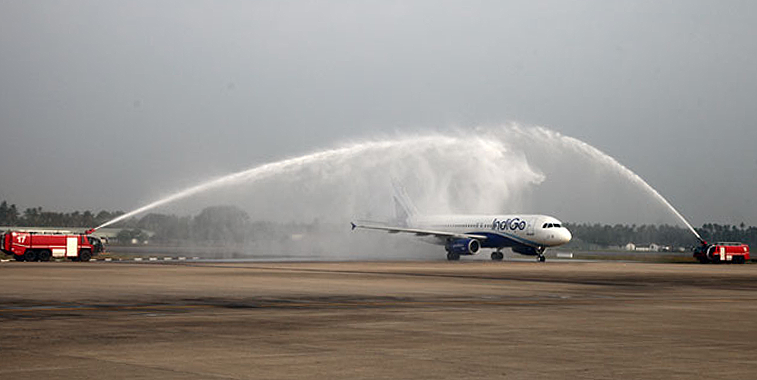 IndiGo received a water arch salute as its first flight to Colombo from Chennai touched down on 20 January. The carrier, which will also link Bengaluru to Colombo, will help enhance the LCC market share between the two nations which in 2017 was just 3.9%, with SpiceJet last year being the only low-cost operator. SriLankan Airlines is currently the number one carrier in the market, accounting for 75% of seats between the two nations in 2017.

India was the number one source for international tourists to Sri Lanka in 2016, a position that the nation has held for the past 10 years and more. With that result, it means Indian arrivals accounted for 15% of international visitors to Sri Lanka in 2016. On the other hand, Sri Lanka was India’s sixth largest source of foreign tourist arrivals in 2016, accounting for 3.4% of the market. The table below shows the breakdown of international visitor numbers between the two nations over the last 11 years, and the growth rate for the past 10. The key conclusion is that between 2006 and 2016, annual tourists from India to Sri Lanka grew by 147%, while yearly tourists from Sri Lanka to India increased by 92%. When combined, it shows that tourist visitors between the two countries increased at an average yearly rate of 8.3%. The two markets also have very strong business and VFR connections which support the relationship and links between these two close nations.

Between 2015 and 2016, combined tourist arrivals between the two countries expanded by 6.5%, with it having grown 6.8% the year before. What is noticeable is that the growing movement of tourists between the two nations appears to be coming from the Indian end of the sector, as Sri Lankan tourist arrivals to India dipped 0.7% for two consecutive years (2015 and 2016). Despite the focus being towards India, the combined growth of the two nations is no doubt a welcome for Colombo Airport, with Sri Lanka’s largest international market now accounting for just under three million annual seats from the island’s premier gateway.

Last year seat capacity between India and Sri Lanka grew by over 17%, with 2.93 million seats being offered between the two nations. This rate has more than doubled from the growth levels that were seen in 2016, with the seat offering between Sri Lanka and India increasing by 7.1% versus 2015. However, while the market has now reported three years of strong consecutive growth, it has not been a stable country paring within the past decade, with 2014 witnessing a 13% cut in seats against 2013, while the 12-month period before that posted a 5.7% drop. 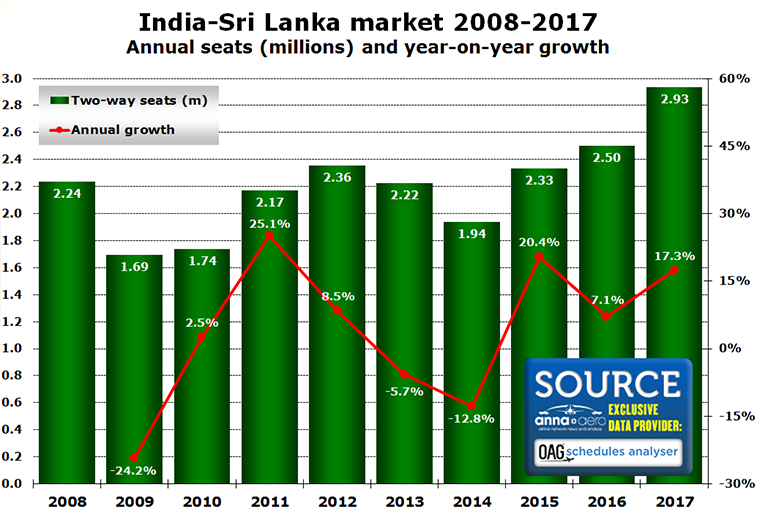 Last year only 3.9% of seats between India and Sri Lanka were operated by an LCC, with those seats being flown on SpiceJet’s services from Chennai and Madurai to Colombo. In 2018, the low-cost market is expected to boom by 326% due to the arrival of IndiGo this month. The largest airline in the market by far is SriLankan Airlines which current has a seat share of 75%, followed by Jet Airways (11%), Air India (9.5%) and SpiceJet (3.9%). SriLankan Airlines’ dominance was advanced last year due to it taking over a majority of the operations from closed down Mihin Lanka, an airline which held a 10% share of seats in 2016. The result means that SriLankan Airlines grew its own seat capacity between its home market and India by 40% last year, with Jet Airways upping its offering by 21%, Air India rose by 4.1%, while SpiceJet remained constant.

Last year, Indian seats accounted for just under 28% of all those available from Sri Lanka, with its market share increasing by a sound 7.9 percentage points from 2016. While the result is fantastic, India’s market share last year is still below the 30% benchmark it had back in 2008. Although last year’s growth to India saw its market share advance greatly, it should be noted that capacity between Sri Lanka and the UAE, the island’s second largest market, saw a 7.9% reduction in seats between 2016 and 2017. 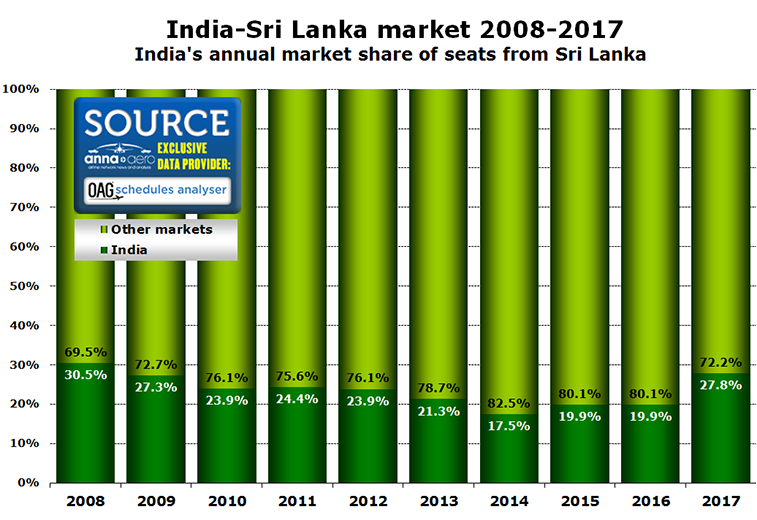 Further support for the growth of India also comes down to the fact that Sri Lanka is no longer served directly from France, Germany and Italy, with SriLankan Airlines ending its routes to Frankfurt, Paris CDG and Rome Fiumicino in 2016. The airline appears to have used the capacity from Europe to enhance services to Asia and the Indian Subcontinent, further boosting India’s dominance from Sri Lanka.

Launching flights on 20 January from Bengaluru and Chennai to Colombo, IndiGo appears to have chosen the fastest-growing city pairs between India and Sri Lanka in 2017 to test the market before further expansion down the line. Chennai, the number one city from the Indian Ocean isle, saw seat capacity grow 20% between 2016 and 2017, while Bengaluru’s increased by a mighty 68%. Of the leading connections in 2017, only three saw capacity cuts versus the year before, with Kochi (-0.3%), Madurai (-2.5%) and Kolkata (-1.6%) all seeing slight dips in seat offerings. 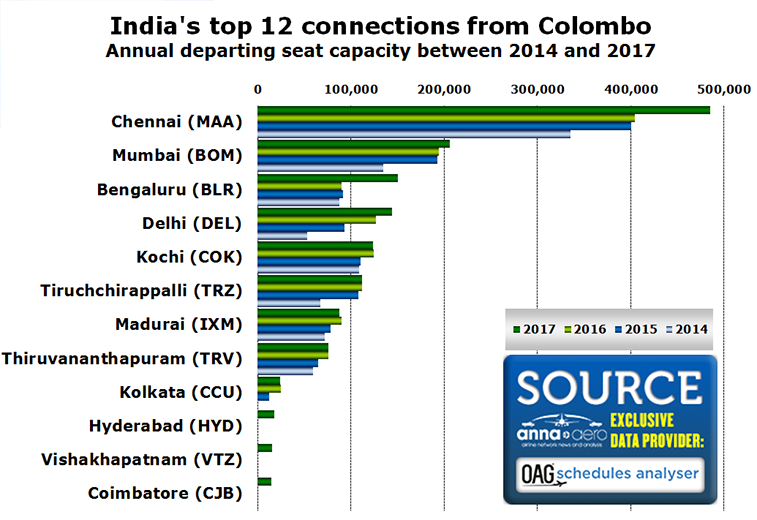 Presently Chennai accounts for 33% of seat capacity between India and Sri Lanka, a market share that has dropped from 36% in 2014 despite the increased number of seats on the city pair. Mumbai in second currently holds 14% of the market, down 0.4 percentage points from 2014, while Bengaluru in third has grown its market share from 9.2% in 2014 to over 10% last year. Delhi in fourth however has seen the best advancement in market share, with the link from Sri Lanka to India’s capital growing its proportion of the market from 5.7% in 2014 to 9.8% last year.

Between 2016 and 2017 four services were started between India and Sri Lanka. The leading carrier for new flights was SriLankan Airlines, with it inaugurating services on three routes from Colombo, namely Coimbatore (launched 16 July), Hyderabad (12 July) and Visakhapatnam (8 July), all of which were unserved before, while Air India commenced a seasonal service between Varanasi and Sri Lanka’s largest city on 4 August. Currently no new routes are planned between the two nations, adding to the 14 that are in operation at the moment, however Jet Airways is poised to end its service between Bengaluru and Colombo at the end of January according to OAG schedules. 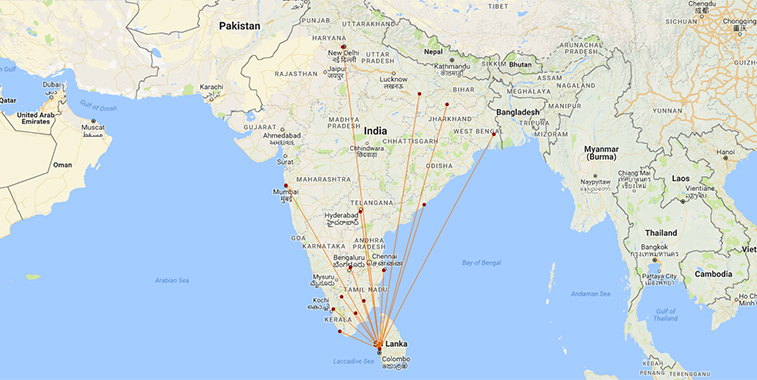 There are currently 14 non-stop connections between India and Sri Lanka, with the leading link being from Chennai to Colombo, a market which has grown 20% in the last year and accounts for 33% of all seats between the two nations.