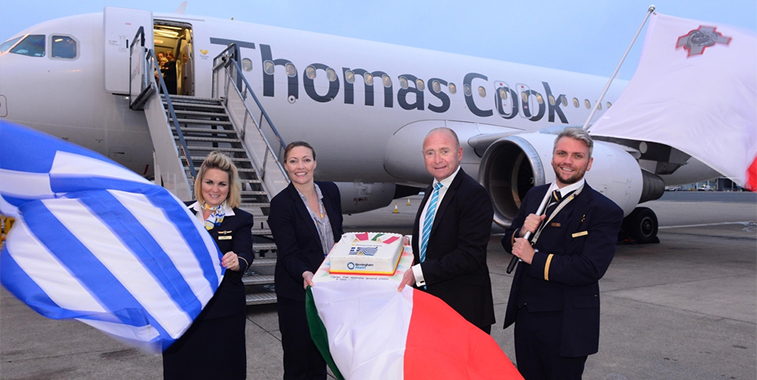 Thomas Cook Airlines was busy at Birmingham in 2017, starting flights from the UK city to Comiso, Lesbos, Malta, Naples and Marsa Alam, with the first four services being celebrated by Louise Arscott, Regional Manager, Thomas Cook and William Pearson, Aviation Director, Birmingham Airport, plus crew. While the airline increased capacity from the airport by 9.1% in 2017, the UK facility is still the leading airport in the group’s network without long-haul flights.

Last year Thomas Cook Group carriers operated just under 19.93 million seats between them, up 11% from 17.95 million in 2015. Between 2016 and 2017, seat availability grew 7.0%, with the year before that witnessing a 3.8% rise, so growth certainly seems to be accelerating at the group’s various units. The top-performing airline within the group is its UK operator – Thomas Cook Airlines – which upped its seat offering by 10% last year, whereas Condor grew by 5.9% and Thomas Cook Airlines Scandinavia by 5.1%. Thomas Cook Airlines Belgium, which posted a 5.5% drop in capacity in 2017, closed operations at the end of S17. 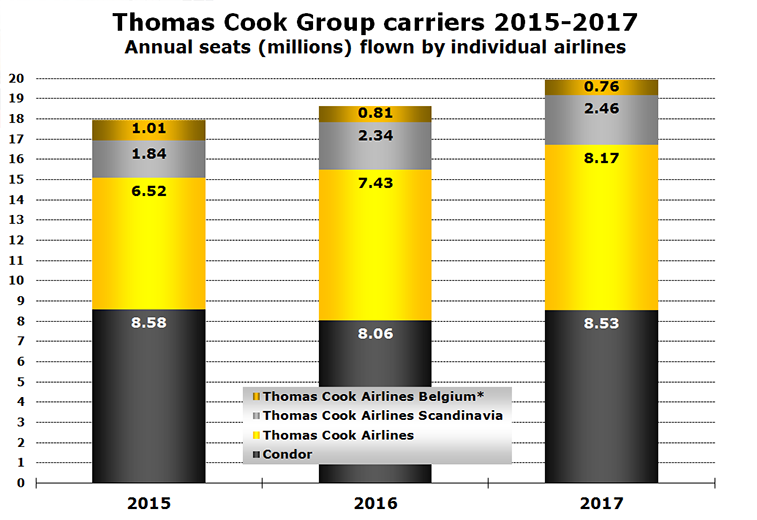 While Thomas Cook Airlines Belgium has closed, the group will start a new unit, with Thomas Cook Airlines Balearics expected to open latter this year with three A320s to be stationed at Palma de Mallorca. Spain is the group’s leading country market (more detail below), with Thomas Cook carriers carrying just under 7.44 million passengers from Spain in 2017 according to statistics from Aena. This places it behind Norwegian which flew 9.77 million passengers from the southern European nation last year.

Between 2015 and 2017, the US market for the Thomas Cook Group has boomed, with capacity more than doubling in the past two years. The result means that the nation has jumped to become the Thomas Cook Group’s fourth largest destination in terms of seats. Spain still remains the company’s biggest market, accounting for 40% of departing seats from its bases in 2017. Two destinations which have seen cuts are Turkey and Egypt, no doubt due to the external factors happening outside of the aviation industry in these nations, with this also being the reason for Tunisia dropping out of the group’s top 12 markets during the past two years. The latter African nation was instead replaced by Canada (only served by Condor), however it should be noted that Tunisia is scheduled to make a comeback to the carriers’ respective networks in 2018. 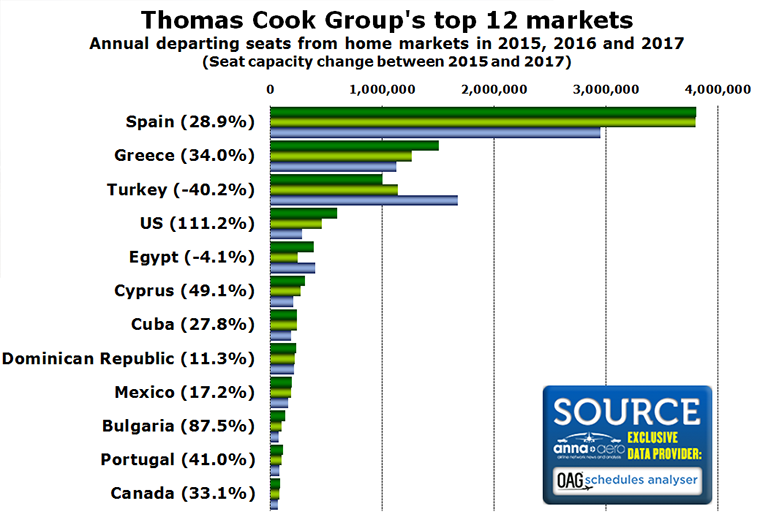 Thomas Cook Airlines races ahead of Condor on US front

Thomas Cook Airlines, according to data from the Bureau of Transportation Statistics (BTS), transported just over 239,000 passengers on US bound services during H1 2017, representing a 37% uplift when compared to the total its flew in the market during H1 2016. During the same period, Condor carried just over 139,000 passengers. If we go back two years to H1 2015, Condor welcomed over 80,000 US guests, while Thomas Cook Airlines greeted just 95,000. The result means that within the two-year period, Condor’s US traffic grew by 73%, however Thomas Cook Airlines’ increased by a mighty 151%. 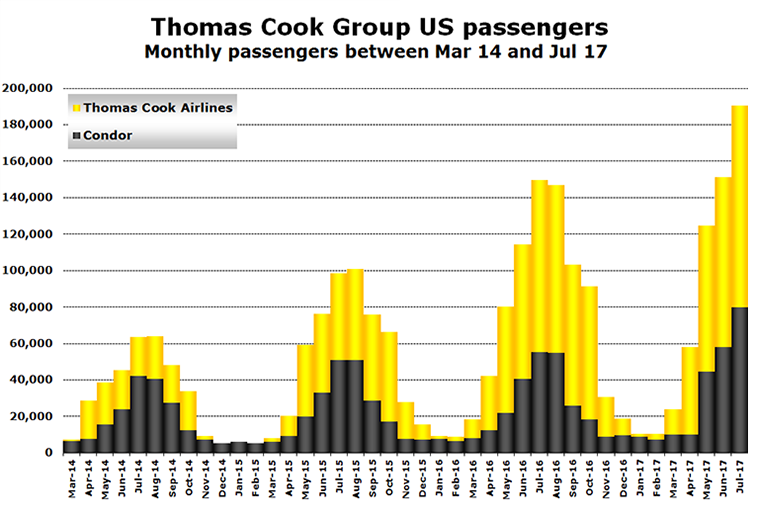 Since 2014, the Thomas Cook Group has launched 20 services to the US from Europe, with a further two already planned for this year, namely Frankfurt to Phoenix and Manchester to Seattle-Tacoma. While the number of US routes has boomed in recent years as part of the group’s expansion into the market, it has also come with some losses as shown in the table below. With route droppings this year including Manchester to Miami, a route launched in 2015, plus Munich to Seattle-Tacoma which was inaugurated only last year.

From its launch until July 2017, Thomas Cook flew 86,400 passengers from Manchester to Miami. This data means that the carrier managed a theoretical load factor of 83% on its route from Manchester during its first two years of operation. Seattle-Tacoma remains on Thomas Cook route map thanks to the new Manchester service, but also Condor’s existing link from Frankfurt.

Frankfurt and Manchester are by far the biggest bases for the Thomas Cook Group, being the only ones to offer over one million departing seats a year, with both seeing just under 10% growth in 2017. Airports highlighted in light green below are Thomas Cook Group bases which presently do no see long-haul operations, with Birmingham being the largest non-long-haul facility, followed by Hamburg. In 2017 Thomas Cook Airlines was the sixth largest carrier at Birmingham, sitting behind Emirates but ahead of Jet2.com. In 2017 Condor was Hamburg’s sixth largest airline as well. While these airports are not served by the Thomas Cook Group with long-haul services, there are a number of airports which have smaller operations in terms of seats, but offer transcontinental routes, including Glasgow (eighth), Stockholm Arlanda (12th), London Stansted (14th), Copenhagen (17th), Oslo Gardermoen (18th), Gothenburg (19th) and Belfast International (21st) and Helsinki (22nd). Given that Birmingham saw 12.98 million passengers in 2017 (12% growth versus 2016), and Hamburg 17.62 million (8.6%), both are large markets that appear to be in stable growth mode, ideal characteristics to support new long-haul services. 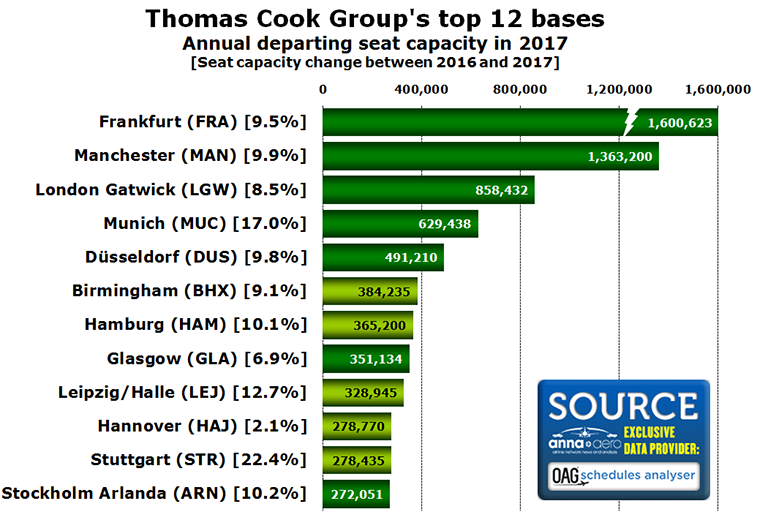 Looking ahead to 2018, along with the two new US services, the carriers that make-up the Thomas Cook Group are launching over 75 routes in 2018, including a return to Tunisia. Below is a breakdown of the Group’s new routes for this year from its bases which are currently filed in OAG schedules:

It is interesting to note that for 2018 Thomas Cook Airlines Scandinavia does not have any new routes scheduled. The most interesting of the new routes is Condor’s link from Frankfurt to Kuala Lumpur which is launching in November, with it becoming the second airline in the group after Thomas Cook Airlines Scandinavia to serve the Asia-Pacific region. Given that Norwegian and TUI Airways are, or have expressed plans, to expand their presences towards Asia from the UK in the next few years, could Thomas Cook Airlines delve further into Asia to keep up with its competitors? Presently the airline’s only destination in Asia is Goa, a link served from Manchester and Gatwick. 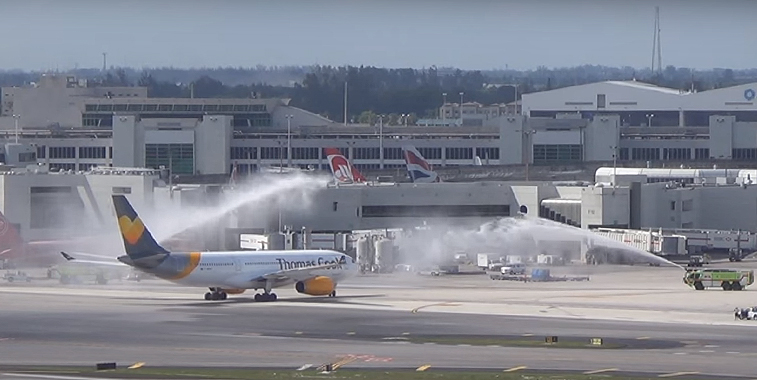 Thomas Cook Airlines added Miami to its network in 2015, coinciding with the start of the airline’s expansion into the US. Unfortunately it appears that the carrier has ended flights to Miami from its largest UK base after three years of operation. Despite the loss of Miami, Manchester will instead be linked to Seattle-Tacoma from this summer, while on the other hand Condor has ended its Washington state airport route from Munich, a link launched last summer.