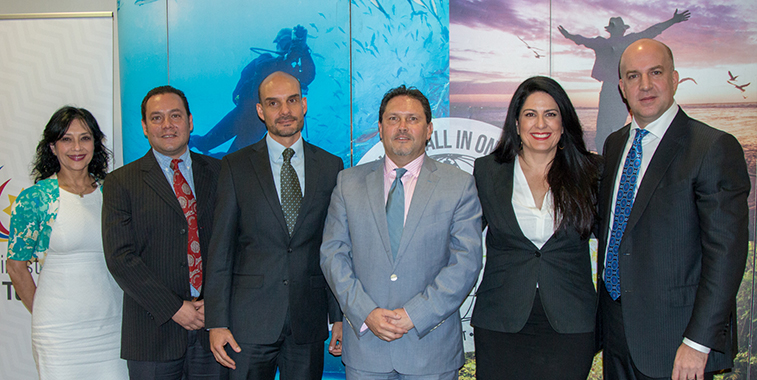 At the end of last year Condor announced its intention to begin flights to Quito from Frankfurt, starting in October. Seen at the announcement of the new service are: Flor de María Izquierdo, Ministerial adviser, Ministry of Tourism; Aldo Luzi, Undersecretary of Markets, International Relations and Connectivity, Ministry of Tourism; Álvaro Maldonado, Secretariat of Productive Development and Competitiveness, Municipality of Quito; Enrique Ponce De León, Minister of Tourism; Verónica Sevilla, GM of Quito Tourism Board; and Andrew O’Brian, CEO of Quiport. Along with Condor, Spirit Airlines will also launch flights to Ecuador in 2018, linking Fort Lauderdale to Guayaquil with a daily frequency.

Ecuador, home to just under 16.39 million inhabitants, is South America’s sixth largest aviation market with regards to seat capacity, offering 13.52 million seats in 2017, behind Peru in fifth (39.16 million seats last year) but ahead of Venezuela in seventh (11.08 million). The nation is served by nine airports which offered over 50,000 departing seats in 2017, with the leading destination for capacity being Quito (3.10 million departing seats in 2017), followed by Guayaquil (2.66 million) and Baltra Island situated in the Galápagos Islands (0.30 million). Quito and Guayaquil are both by far the most dominant hubs in the country, with the two combined providing 85% of seats from the nation last year, up from 84% in 2016.

Market drops by over one quarter in four years

Last year there were 13.52 million seats in the Ecuador market, a drop of 9.8% when compared to 2016. The result means that seat capacity has been cut from the nation for four consecutive years, with seat availability, being 27% smaller than it was four years ago when capacity hit a high of 18.54 million seats. Last year is the worst year on record for capacity during the past decade. The pattern in capacity cuts seen from Ecuador matches year-on-year trends in passenger numbers being seen from the nation’s capital – Quito – the destination for Routes Americas 2018, taking place between 13-15 February. 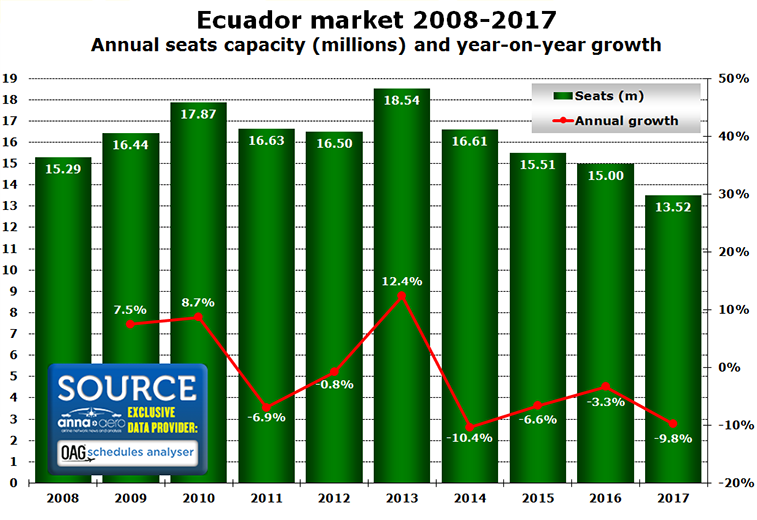 With Spain, Ecuador’s sixth largest country market, seeing an increase in seat capacity of over 34% last year, and Peru (fifth) reporting a 4.1% rise, the two countries are the only ones among the top 10 to have produced positive results in 2017. The worst performing market is Panama (fourth), which posted a 14% cut in capacity last year, while the domestic market, which is the leading sector, produced the second worst result, highlighting a 12% drop in seats. 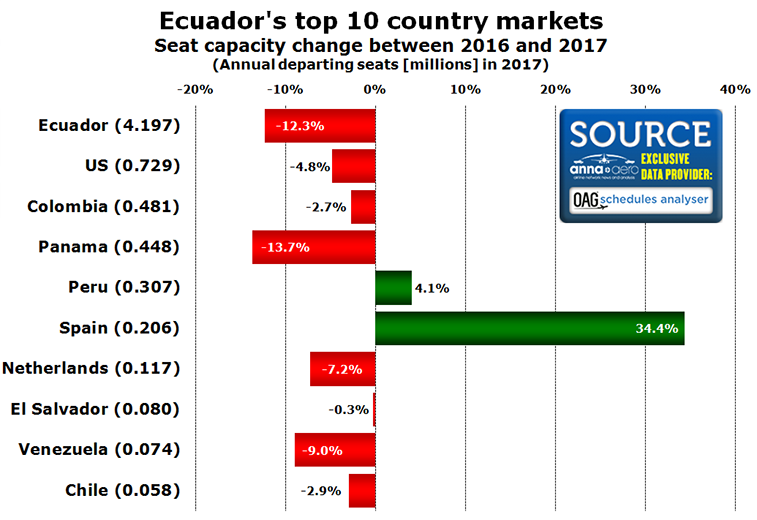 Outside of the top 10, one market which has now left Ecuador’s network is Cuba, with tame having ended its twice-weekly link between Quito and Havana on 13 April last year. Along with Cuba, the only other market to have seen a regular air service outside of the top rankings is Mexico, with Aeromexico offering a daily link from Mexico City to the Ecuadorian capital. Interestingly, the market between Mexico and Ecuador grew 9.0% between 2016 and 2017, thanks to the Mexican flag carrier using larger equipment on its sole route that connects the two nations.

tame has remained the leading airline in Ecuador despite posting a 25% cut in annual departing capacity last year. The result has allowed LATAM Airlines to close the gap on the number one carrier title, thanks in part to it increasing capacity, albeit by just 1.8%. Along with tame, a further six carriers in the top 12 (highlighted in red) chopped capacity from Ecuador in 2017 when referencing OAG schedules. One airline which had its first full year of operation from Ecuador in 2017 was Air Europa, with the SkyTeam carrier beginning a link between Madrid and Guayaquil on 16 December 2016, while Quito was inaugurated a few weeks ago. 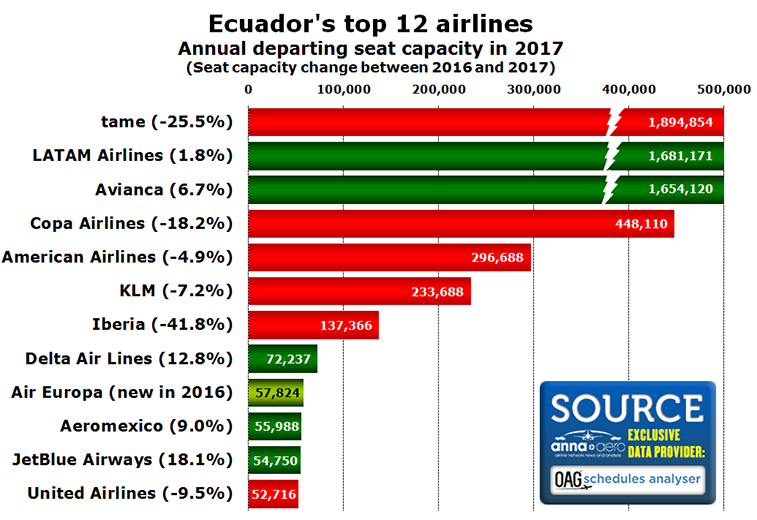 Outside of the top 12, Avior Airlines (13th) reduced its seat capacity to Ecuador by 12% last year, while Conviasa (14th) saw a slight dip, posting a 0.6% reduction in seats during 2017. The nation looks set to have a shake-up in 2018 as two airlines have already confirmed that they will enter the market in 2018. North American ULCC Spirit Airlines will initiate daily fights from Fort Lauderdale to Guayaquil on 22 March, while Condor, a part of the Thomas Cook Group which has been recently analysed by anna.aero, has confirmed its intentions to link Frankfurt to Quito from October. 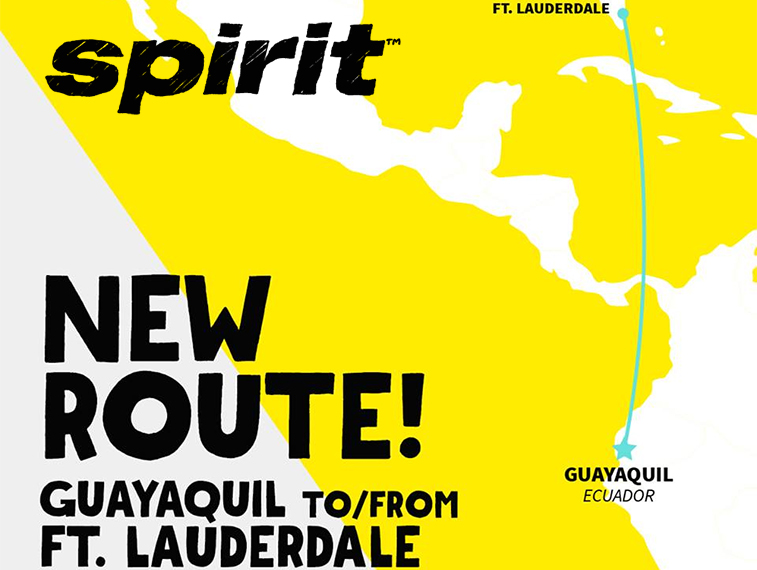 Spirit Airlines will make its Ecuador debut on 22 March, the day that the ULCC will begin a daily, year-round service to Guayaquil from Fort Lauderdale. The news is great for Ecuador, as it comes at a time when the nation has reported four consecutive years of capacity cuts, with the market in 2017 being 27% smaller than it was in 2013. The result confirms that last year was the lowest for seat capacity from the South American nation in a decade.