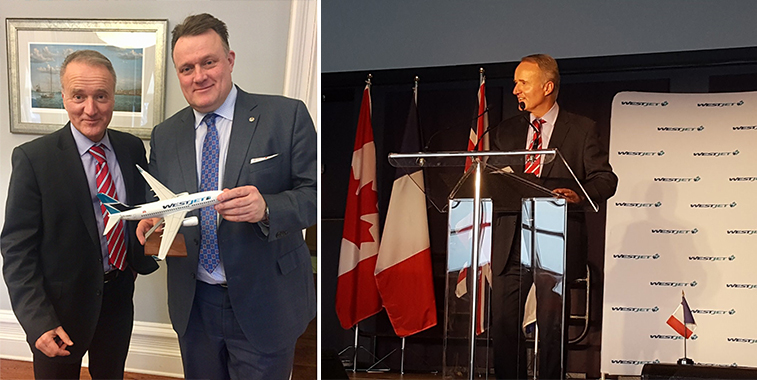 WestJet’s EVP of Commercial, Edward Sims, met with Halifax Mayor, Mike Savage, on the morning of the 29 January, just before he went into a press conference to announce that the airline will start daily 737 MAX 8 services to London Gatwick and Paris CDG from the 29 April and 31 May respectively. The later will be the airline’s first route to France. “These new direct routes will better connect a growing Halifax with the world and allow more people to discover the many business and tourism opportunities offered by our city and province,” said Savage.

WestJet has confirmed that its first 737 MAX 8 transatlantic operations will be from Halifax in Nova Scotia, with the carrier announcing that it will start daily flights to London Gatwick and Paris CDG. “As the carrier with the most transatlantic flights from Halifax, we are thrilled to announce our first foray onto the European mainland,” said Ed Sims, WestJet EVP of Commercial. “Venturing to London, and now Paris, is an indication of our ambitious growth plans as we move towards becoming a global network carrier. This is an investment that will help launch new flights in the future and further expand our presence in Halifax – a key driver in economic and employment growth.” The news means that for S18 the airline will serve three transatlantic routes from Halifax, with these sectors to the capitals of the UK and France adding to its existing seasonal link to Glasgow, a route currently operated on 737-700s with a daily rotation during the high peak of summer. A breakdown of the new route details can be seen in the table below.

The only one of the two routes to face indirect competition is the link to the UK, with WestJet breaking Air Canada’s monopoly on its London Heathrow service, which in the summer peak operates daily on 767-300s. Halifax was connected to Paris CDG with ASL Airlines which ran a link to the French capital via Dublin, however it appears that this summer seasonal route has been cancelled for S18 when referencing OAG schedules and the carrier’s booking engine. Paris CDG becomes a new airport for WestJet, its first in France, while the Canadian airline already links Calgary, Edmonton, Toronto Pearson, Vancouver and Winnipeg to Gatwick. The airline did link St. John’s to Gatwick last summer, however it appears that this route will not return in S18, allowing WestJet to use those slots to open up its Halifax service.

By announcing flights to Paris CDG, WestJet will become the first airline to offer non-stop 737 MAX 8 flights over the Atlantic to a mainland European airport, with all other services operating from either Ireland, Norway and the UK, with Iceland also poised to join this list in S18 thanks to Icelandair’s order for the type, with the first deliveries expected in April. A snapshot of planned operations over the Atlantic in S18 can be seen in the table below, with a total of 89 weekly flights currently planned, up from 35 last summer. It should be noted that operations for this summer could still be altered. 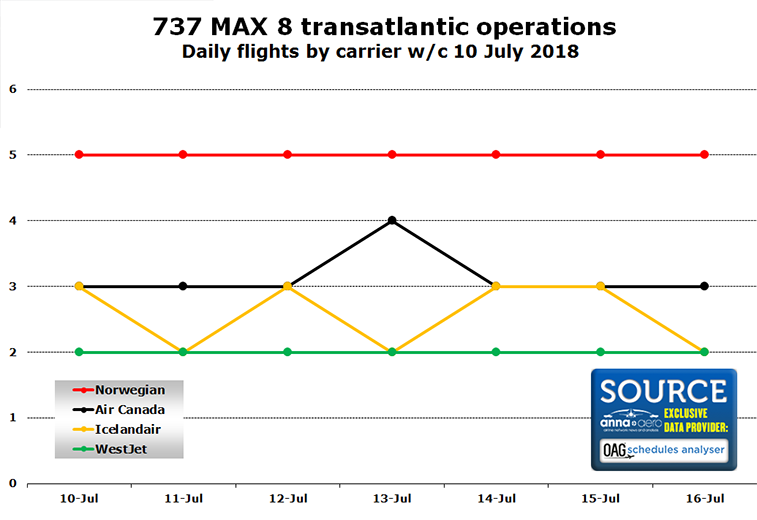 Norwegian leads the way this summer with five daily one-way departures over the Atlantic. The carrier received some of the first 737 MAX 8s to be delivered, putting them into operation last year and was the only operator of the type across the Atlantic in S17. Along with WestJet, Icelandair and Air Canada are both new operators of the type over the pond this year. Icelandair will initially use its 737 MAX 8s on routes from Reykjavik/Keflavik to Cleveland, Halifax, Montreal and Philadelphia, while Air Canada is poised to initiate the aircraft on flights from Montreal to Reykjavik/Keflavik and Dublin, from Toronto Pearson to Reykjavik/Keflavik and Shannon, and from St. John’s to London Heathrow.

Since being launched on transatlantic routes in 2017, the 737 MAX 8 will have served 23 city pairs between Europe and North America by the end of 2018 based on current schedules. Of those launched so far, two have been cut, with Norwegian having ended its route between Bergen and Providence on 25 October, while it has confirmed from 24 March it will no longer connect Edinburgh to Hartford. Along with Hartford being cut from the route map, Norwegian has also reduced its weekly frequency between Edinburgh and Providence from four to three. It would appear that the losses being seen from Edinburgh and Bergen have been picked up by Shannon, with it gaining additional flights to Stewart and Providence since launching last year, with Air Canada bringing the aircraft type to the Wild Atlantic Way airport in a few months’ time. The table below shows more detail of the 737 MAX 8 routes that have launched so far, or are scheduled to begin this year.

The average weekly frequency of a 737 MAX 8 route across the Atlantic in 2018 will be 4.9, with only five connections being flown daily. Along with this, five routes which are being introduced by Icelandair (four) and Air Canada (one), are links that were previously flown by another aircraft type, with only Cleveland for Icelandair being a new connection. With carriers including American Airlines, Ryanair, Southwest Airlines, Primera Air and United Airlines also having 737 MAX types on order, it will certainly be interesting to see how this aircraft further shapes the transatlantic market in years to come, particularly with regards to new competition and niche city pairs. 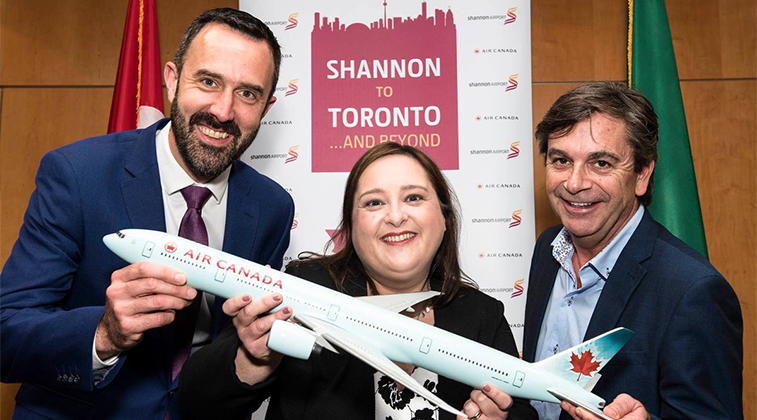 Back in September, Air Canada announced that it will begin 737 MAX 8 flights to Shannon from Toronto Pearson. Seen celebrating the news are: Andrew Murphy, MD Shannon Airport; Blaithin O’Donnell, Air Canada Sales Manager, Ireland; and Declan Power, Head of Aviation Development, Shannon Airport. Shannon appears to be the best airport for 737 MAX 8 services across the Atlantic, with it being the only destination to see frequency increases since the aircraft type helped open new US services last year to Stewart and Providence, both flown by Norwegian.