Stavanger-Paris is “Skyscanner Unserved Route of the Week” with 33,000 searches; Norwegian’s next Norwegian route? 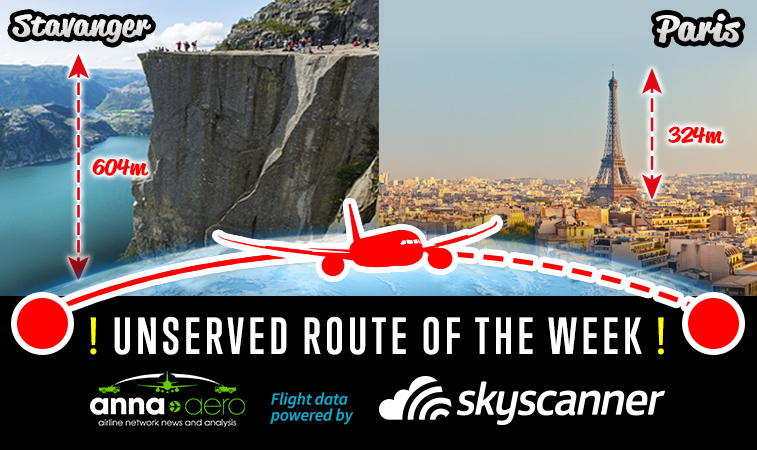 Can you affjord to ignore this route? Just 36km from Stavanger, Preikestolen (“Pulpit Rock”), attracts over 300,000 annual visitors, making it one of the most visited natural tourist attractions in Norway. In contrast there are virtually no natural granite precipices of note in Paris.

With over 33,000 searches in the last year, a potential city pair from Stavanger to Paris has been identified as this week’s “Skyscanner-anna.aero Unserved Route of Week” – a powerful analysis based on aspirational data captured from the Skyscanner.net flight comparison site used by +60 million unique visitors per month. “We see the Paris market mainly as point-to-point and at some extent beyond to North America,” suggests Majid Khan, Senior Director Traffic Development for Avinor. 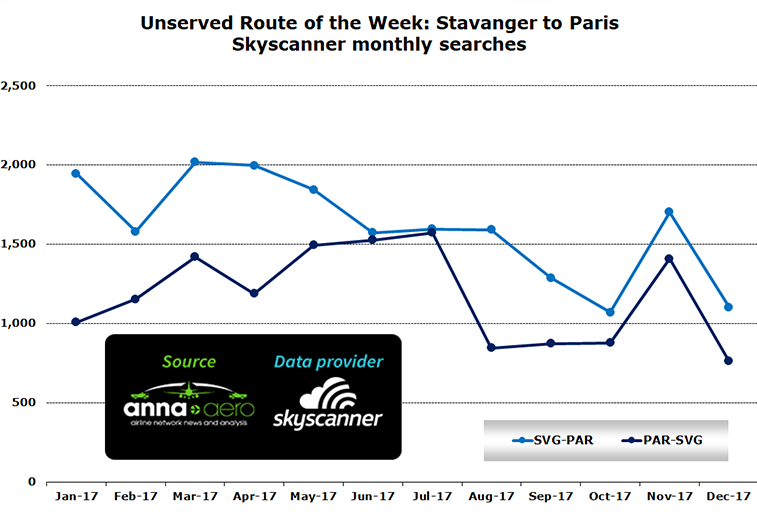 Skyscanner demand on this week’s unserved route shows a preference towards the Stavanger end of the city pair, with a 58/42 split, so on this basis we looked at potential carriers at the Norwegian origin first. According to OAG schedules for the week commencing 29 January, the largest carrier at Stavanger is SAS (48% share of weekly seats). The airline’s seven point non-stop route network from Norway’s fourth largest airport presently consists of four European destinations, including Copenhagen (served 27 times weekly), Aberdeen (11), London Heathrow (eight) and Stockholm Arlanda. While the Star Alliance carrier is currently not serving any French destinations from Stavanger, it does operate to Paris CDG from its three biggest hubs at Arlanda (12 times weekly), Copenhagen (11) and Oslo Gardermoen (five), so it is a city pair market with which it should be familiar. In fact SAS did operate the route during S16 with a twice-weekly service, but the sector was withdrawn. Perhaps if the route was operated on a schedule compatible with business travellers, the airline may garner more long-term success on a service to the French capital.

Of Stavanger’s nine serving airlines, and behind SAS in #2 spot, is Norwegian (34% share of seats), which like its nemesis presently has a small European network linking the Norwegian city to London Gatwick (12 times weekly), Berlin Schönefeld, Alicante, Krakow , Manchester, (all twice-weekly), Gran Canaria, Malaga and Salzburg (all weekly). While its European network is broader than that of SAS, it can also potentially offer passengers the opportunity to connect onto its own long-haul services from Paris. Although split across Paris’ two main airports, the LCC is starting US flights to New York Newark (from Paris Orly on 28 February), Denver (Paris CDG; 9 April), Oakland (CDG; 10 April) and Boston (CDG; 2 May). More pertinently the French capital would seem to be on Norwegian’s route development agenda from its home market, as it plans to commence a six times weekly operation from Gardermoen next month.

Contemplating the French end of the route, the city’s and both Orly and CDG’s leading capacity provider of its current 117 serving airlines is unsurprisingly Air France, which offers 46% of the French capital’s weekly seats. The SkyTeam carrier is clearly keen on adding more points to its European network from its main hub at CDG, and on this basis, the country’s flag carrier is the most likely to consider a new route to Stavanger. Later this year it will add connections to Catania, Cork and Wroclaw, but perhaps most importantly to Bergen, Norway’s second busiest airport. Should this route prove successful, Air France may well consider a return to Stavanger – as the airline had previously served the city pair until 16 October 2015, according to OAG schedules – especially given this compelling Skyscanner data.

When looking at the previous year of search data (graph above), the busiest month for potential traffic flows (from Stavanger) is March 2017, with over 2,000 searches, while the quietest month was October 2017 (1,100 searches). Given the anticipated booking profile of the route – short-haul business – 80% of travellers on this potential sector will want to book in the last month before departure, so this would seem to indicate that the busiest month for traffic will be April, with the seasonal low being in November. Using the same methodology for the Paris end of the sector, the peak month for traffic will be August, with the yearly low being January.

According to OAG Traffic Analyser, because there is no direct service, the top three connecting options chosen by those passengers who did book travel between Stavanger and Paris in the last 12 months (year ending November 2017) indicates that the majority of connecting travellers used Amsterdam (40%), Gardermoen (27%) and Copenhagen (26%). “Our data confirms these results,” adds Khan. “It too shows that currently traffic flows to Paris goes via Oslo, Amsterdam and Copenhagen.” A total of 16 different airports were used as a transfer point between the two cities during the period analysed. 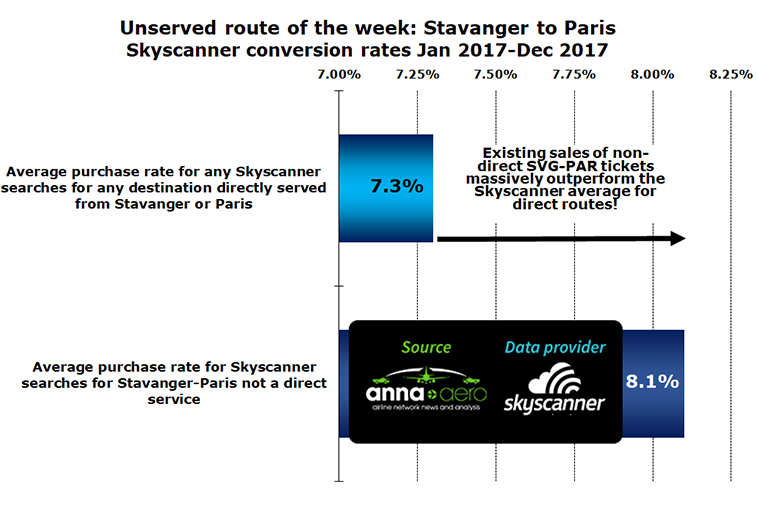 With a lack of direct services, travellers between these two cities have clearly become used to these one-stop alternatives. However, the market demand is extremely buoyant – as the graph above shows, with 8.1% of the Skyscanner searches for these indirect Stavanger to Paris services converted into ticket sales – that’s more than the average 7.3% achieved for Skyscanner conversion/purchase rates for all direct routes available from either Stavanger or Paris. However, with over 33,000 annual searches, a three or four times weekly service should be immediately viable for the airline potentially looking to start this potential city pair. “The majority of current traffic figures are driven by business traffic down to Paris, but we see a great potential for inbound tourism from the French capital – the Rogaland area where Stavanger is located is investing to focus on inbound tourism. Additionally, for outbound Stavanger to Paris has obvious potential as a city-break destination,” concludes Khan.