FTWAs with turboprops are quite rare. In fact before this week’s two offerings from Wings Air in Indonesia and Italian start-up FlyValan, we had only received one so far this year. So intrigued were the anna.aero data elves about the split of entries by aircraft type, that from now on all FTWAs will be categorised by the aircraft flying the route – with four groupings being used. Across the 17 water arches sent in by the world’s airports in 2018, 52% have been flown by narrow-body types, 24% by wide-bodies, 14% by turboprops and just 12% by regional jets. We will keep you up-to-date with this exciting new development in Arch of Triumph statistics. In the mean time, last week’s winners Sydney have done it again, not only winning for a second week in a row, but improving its score. So while turboprops and brand new airlines (two this week!) are rarer than the normal water salutes given to the world’s leading airlines, nobody was unable to stop the mighty Sydney which appears to be on quite the FTWA roll at the moment. Keep Monitoring!! 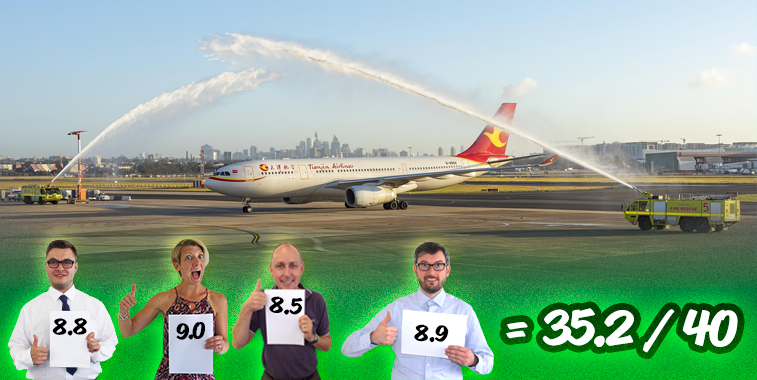 Last week’s winners are at it again…

Judges’ comments: Having clinched victory last week for the FTWA which was performed to welcome United Airlines’ new link from Houston, Sydney has listened to our comments and upped its game to greet Tianjin Airlines’ route from Zhengzhou. With a score of 32.4 last week, all we said was that the tenders just needed to give a bit more ooooooooommmmmmmppphh to close the gap on the arch. The power was certainly there this time, but it would appear that the photographer took the picture just a little too early, but at least the cityscape shot makes up for that weakness… 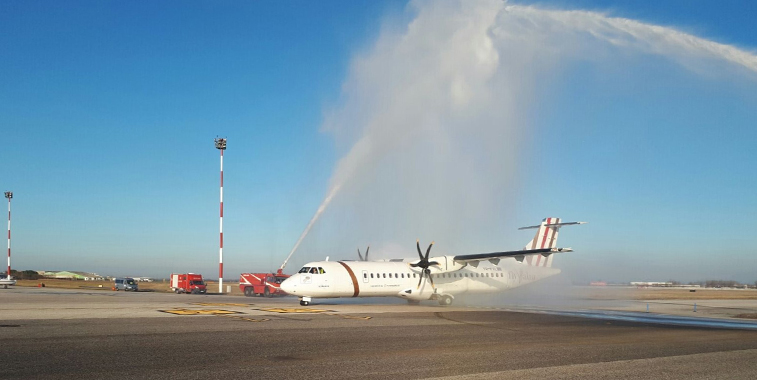 A brand new airline means heavy marketing, including getting that water salute spot on…

Judges’ comments: Until we received this picture, anna.aero’s data elves had never heard of FlyValan, a new regional operator based in Genoa. Trieste pulled out all the stops to greet its new carrier, but this FTWA would have looked much better from a front-on angle. Brussels, Geneva and Zurich (next planned routes) take note, you will need to better this when you welcome FlyValan in the coming months… 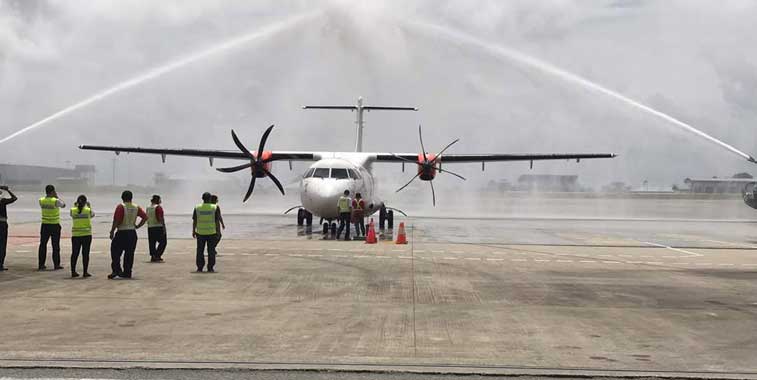 Ok guys you can turn the water off now…the pilot is ready to get off!!

Judges’ comments: While the aircraft has clearly parked-up and turned off its turboprops, it seems the firefighters at Kuching were adament to get that perfect arch. Either that, or they were allowing for the airport staff in the foreground to get the ideal angle for the Instagram shot before turning off the tenders. Our elves think the Nashville filter will give this arch the perfect glow…don’t forget those hashtags though!

The first of three very shy right-hand tenders in Argentina…

Judges’ comments: Growing up, many a poor child would have been victim of leftism, not in the political sense…but for being left-handed! All of anna.aero’s data elves grew up in the Northern Hemisphere, so we would like to know if being a right-hand person in the Southern Hemisphere is more shocking than being a lefty, as all three FTWAs for Flybondi are missing the right-hand tenders in the salute photos… 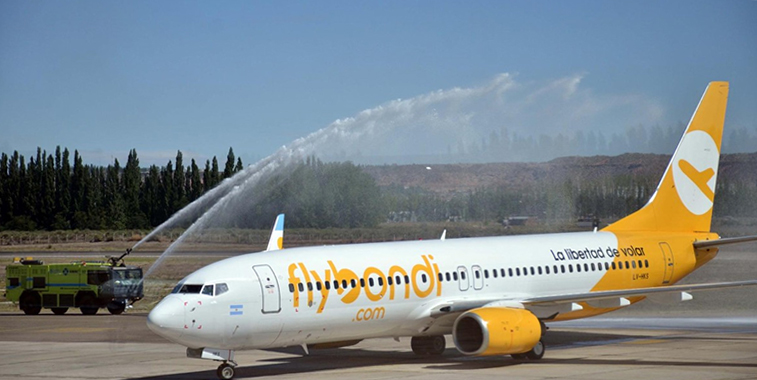 We are loving the Flybondi livery!

Judges’ comments: anna.aero’s data elves just love the design of Flybondi’s aircraft livery, with it hitting the right balance of eye-catching, simplistic and elegant, very important for a new brand to get correct. It is a good job that the photographer managed to catch the aircraft side-on in all its glory, as this water salute from San Carlos de Bariloche is not so pleasing on the eye as the livery… 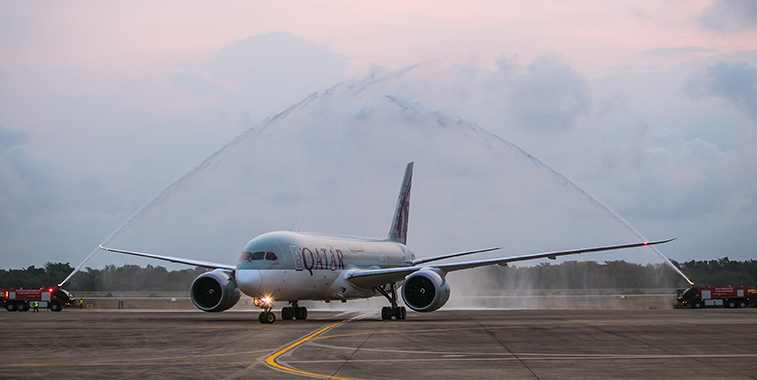 No disappointment in Utapao with this FTWA which is saluting a very important route launch.

Judges’ comments: For an airport the size of Utapao (1.39 million seats in 2017), the arrival of a carrier such as Qatar Airways is very prestigious, particularly given the connections that have now become available thanks to this Doha link. The pressure would have been on for the airport’s firefighters to produce a wondrous welcome, and with this effort, the team can sleep happily knowing that they did a good job. 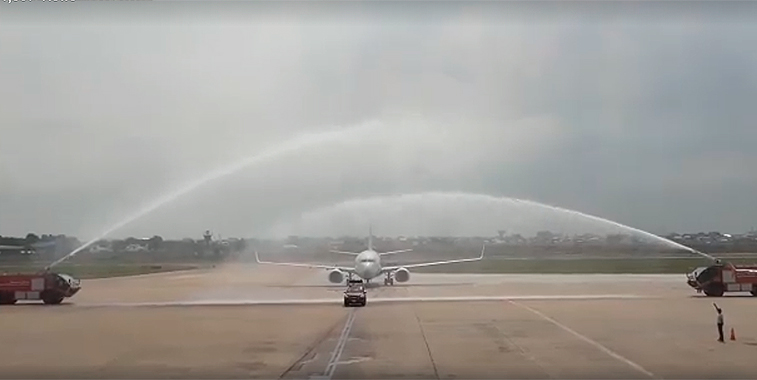 Judges’ comments: It’s been a while since we got a shot of a classic Gangnam Style FTWA, and Phnom Penh has brought back the hit to greet the arrival of Xiamen Airlines. While the song has mixed emotions among people, we hope that the FTWA that was modeled after the hit stays alive a lot longer than the water arch crazes of the early 2000s…do you remember the Crazy Frog FTWA??? 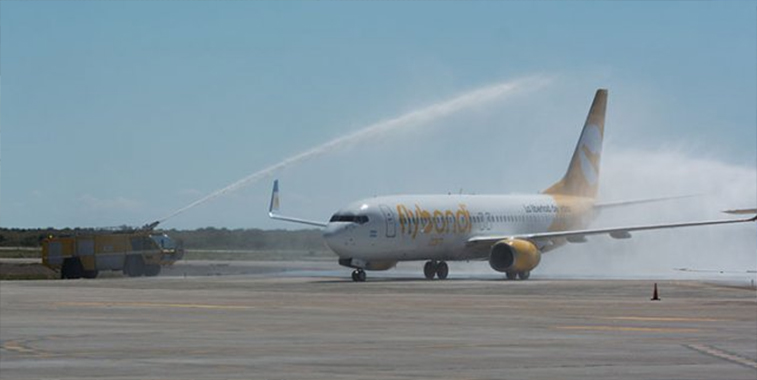 Who put that cone there!!!

Judges’ comments: There are many rules that anna.aero’s judges cannot stress enough about water arch saluting, but the number one is this…remove apron clutter!! While this FTWA from Mendoza is not one to boast about, it would have scored a little better if that rogue cone was out of shot. If Mendoza becomes part of Norwegian’s low-cost venture in Argentina, lets hope they move the clutter before the aircraft touches down…