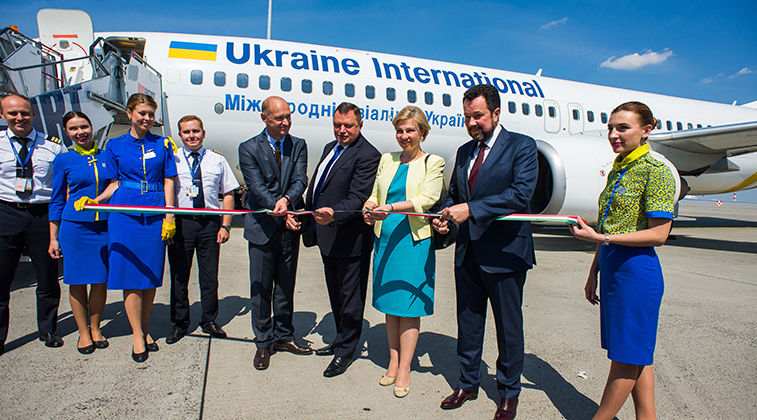 Ukraine International Airlines (UIA) is the flag carrier and largest operator in its home country based on departing seats in 2017, a position it has held since 2012 following the collapse of Aerosvit. ch-aviation shows that the airline currently operates a fleet of 41 active aircraft, including 30 737s, of which 22 are the ubiquitous 737-800 variant. The carrier also operates a small number of regional jets and four 767-300s.

UIA increased its annual capacity from 1.5 million seats to 7.9 million between 2008 and 2017. This represents an increase of 422%. During that period the airline experienced only one year-on-year fall in capacity, which came in 2009, corresponding with the global economic downturn. Since then there have been eight consecutive years of growth, with several noticeable spikes in UIA’s seat numbers. The first occurred from 2012 to 2013 when capacity grew from 2.4 million seats to 4.6 million, representing an increase of 89%. In 2013, UIA’s main rival Aerosvit went out of business. The latter carrier had been the largest capacity provider in Ukraine from 2008 to 2011, but after stripping back its services in 2012, it ceased operations early the following year. UIA picked up the pieces, making the most of the opportunity to become the market leader in its home country by taking on some of its competitor’s former routes and significantly increasing capacity during 2013. The following year saw the airline increase capacity by 3.1% despite the external events taking place in its home market. There was another growth spike from 2015 to 2017 with seat number increasing by 51% during this period. 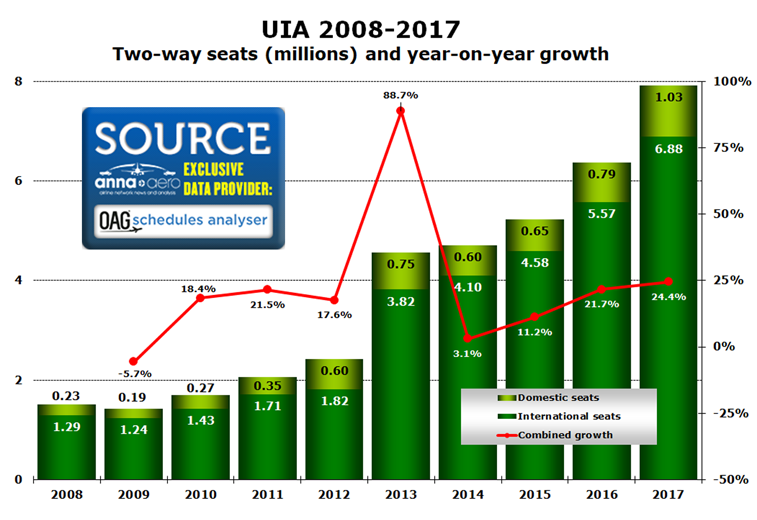 International capacity has accounted for the majority of UIA’s available seats over the past 10 years. In 2008 non-domestic services provided 85% of all seats across the airline’s network. This fell to a low of 75% in 2012, but this was a brief interlude, with international capacity accounting for 87% of all seats in 2017. In 2008, UIA offered about 226,000 seats on domestic departures. This has grown to about one million seats on domestic routes last year, representing an increase of 356%. Over the same period, international capacity increased from 1.3 million seats to 6.9 million, a growth rate of 434%. In 2014, when Ukraine was facing incursions in the east of the country, there was a significant 19% reduction in UIA’s domestic capacity, but this has since recovered and grown. There was no such drop in international seats in 2014, with this segment of the carrier’s operation witnessing 7.4% growth that year.

Kiev Boryspil is by far the most important airport in UIA’s network. In 2017 about 46% of its available seats departed from Ukraine’s largest facility. Boryspil is the carrier’s largest departure point for both domestic and international services, accounting for 50% and 45% of departing seats respectively. In all, four of the airline’s top 12 airports in 2017 were located in its home country, with the others being Odessa, Lviv and Kharkiv. The top international airport is Tel Aviv. All of the top 12 airports are located in Europe, the Middle East or countries straddling Europe and Asia. Most of the leading gateways experienced strong capacity growth from UIA between 2016 and 2017, with three facilities witnessing an increase of more than 30%. Lviv saw the largest single percentage increase with UIA adding capacity on the domestic link to Boryspil as well as on several international routes. 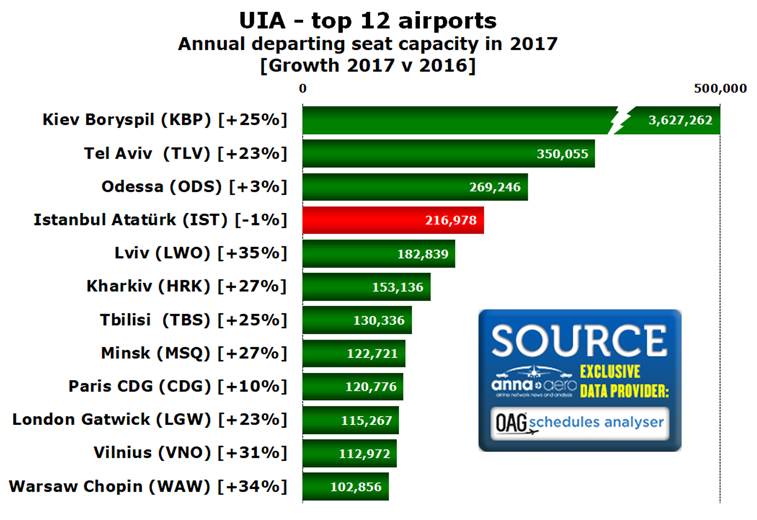 UIA served eight domestic airport pairs in 2017 and they all served Boryspil, with the largest of these being the connection with Kharkiv. Several domestic airports have dropped out of the airline’s network in recent years for obvious reasons, with Donetsk and Simferopol not served since 2014. The only top 12 airport to see a reduction in capacity from 2016 to 2017 was Istanbul Atatürk, but even then the Turkish airport only experienced a marginal drop in seats.

Israel is the leading international market for UIA, a position it has held since 2015. Russia had been the airline’s top international country destination in 2013 and 2014, but this has inevitably fallen by the wayside, with the airline no longer providing scheduled services to the country. All but one of the top 12 country markets experienced an increase in seats by UIA from 2016 to 2017. The strongest increases occurred on services to Germany and Lithuania. The carrier served four destinations in Germany from Boryspil in 2017, increasing capacity on all of them from the previous year. UIA also added seats on several links to Lithuania last year, in addition to launching new connections to the country. The only top 12 country market to experience a fall in seat numbers was Kazakhstan (highlighted in red), with the carrier cutting capacity on some airport pairs and axing the link from Boryspil to Aktau. 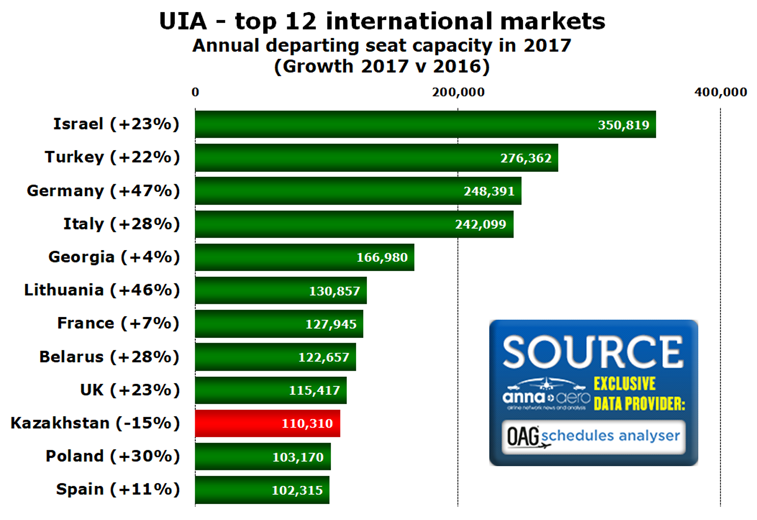 A glance at the capacity already loaded for UIA in OAG schedules for 2018 indicates that the carrier intends to continue its growth spurt. The data suggests that the airline is on target to increase its available seats by a further 16% this year. anna.aero’s New Route Database does not have any new services listed as yet for UIA in 2018, but stay tuned to hear of any new developments here first. 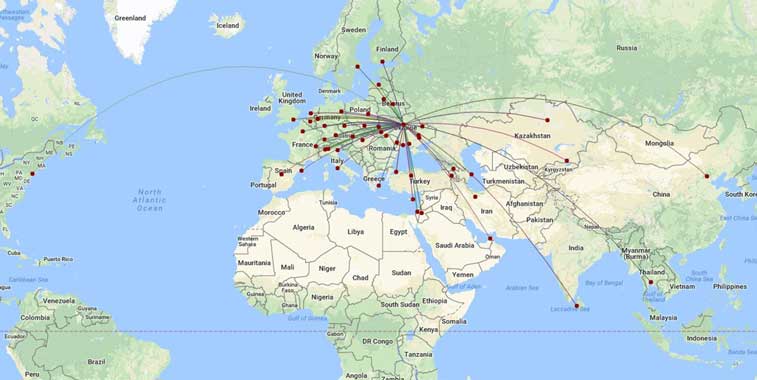 UIA’s route map from Kiev Boryspil for the week commencing 30 January highlights its connections to Europe and the Middle East, along with some long-haul links to the likes of New York JFK. International capacity accounted for 87% of the airline’s network in 2017. Israel has been its largest international destination market since 2015.