US regional airports accounted for 19% of seats in 2017; ULCCs report greatest growth; Pittsburgh and Cleveland are on the up 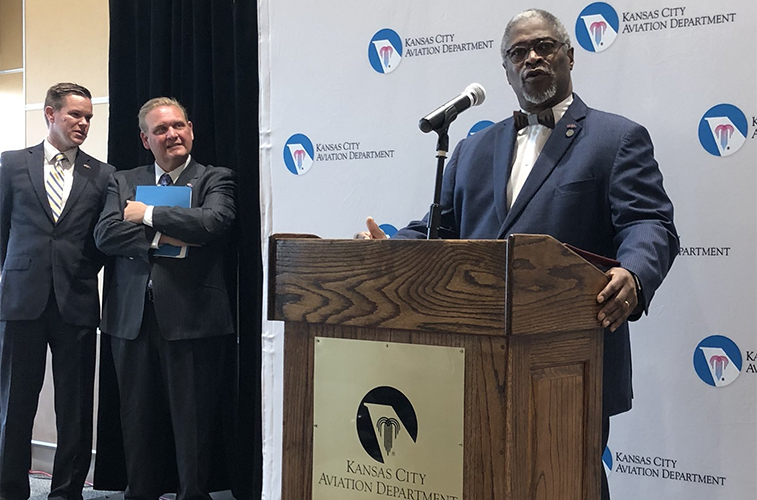 On 9 January Sly James, Mayor of Kansas City, watched by Justin Meyer, Deputy Director of Aviation Marketing and Air Service Development, Kansas City Aviation Department and Michael Raucheisen, Media & Public Relations North America, Icelandair, announced that the European carrier will begin flights from Reykjavik/Keflavik to the US city starting 28 May. With Kansas City now gaining non-stop transatlantic flights, it means that the top US markets for European service are now all regional airports (below 10 million passengers), except for the case of Honolulu (19.95 million passengers in 2016). However some airports in this category do support transatlantic flights already.

When referring to OAG Schedules Analyser data, there were 558 US airports which offered over 10,000 departing seats in 2017, with 516 of these handling less than 10 million annual passengers. That means that there were 42 airports which processed in excess of 10 million passenger last year. While most of these are hubs and/or cities with large O&D markets, anna.aero has decided to see what is occurring at the airports which sit below this category, to get a clearer picture of the trends outside of the US’ top cities. For this analysis, anna.aero has classed a US regional airport as being a facility that welcomed less than 10 million passengers during 2016 (last calendar year with complete 12-month data from all airports).

Last year there were around 2.12 billion seats in the US market, up 3.7% on the total for 2016. Splitting this data into airports above and below 10 million passengers, facilities which handled a greater amount witnessed an average increase in capacity of 3.3% last year, while airports below 10 million encountered an average increase of 5.3%. While this shows that the better growth in 2017 was reported at regional facilities in the US, the collective of some 516 airports accounted for just 19% of all seats from the nation last year. Despite the low market share, their portion of all seats in the US increased by 0.3% when compared to 2016. 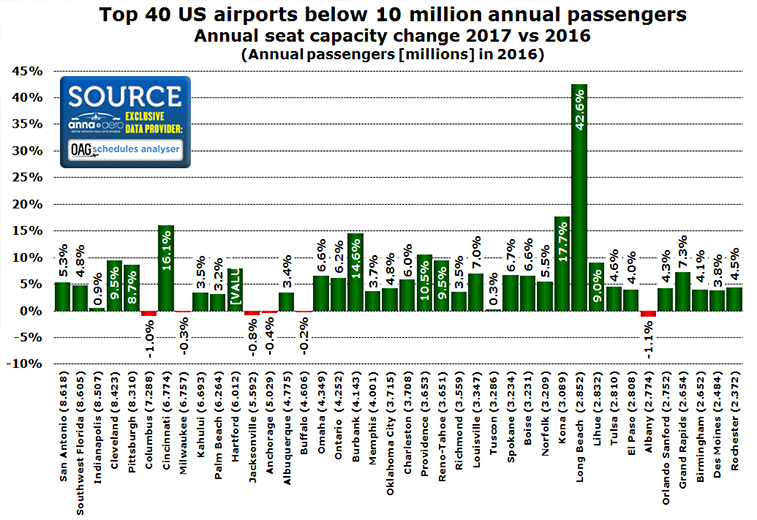 If you’re a regional US airport working hard to develop new air services, and are planning to head down to Quito in a few weeks’ time for Routes Americas 2018, or ACI-NA JumpStart which is taking place in Cleveland in June, it would appear that your best bet for getting that sought after link would be to approach an ULCC, with the trio of Frontier Airlines (47% capacity growth from regional airports in 2017), Spirit Airlines (28%) and Allegiant Air (12%) being the leading carriers for growth from US regional airports in 2017. While ULCCs are growing vastly at regional airports, the company which is reporting the best net increase in seats is American Airlines, overtaking Delta Air Lines last year to become the US’ leading carrier at regional facilities. It added 1.84 million one-way seats to non-major gateways in 2017, with Frontier Airlines taking second spot when using this measurement, having introduced an extra 1.46 million departing seats to the market from regional airports in 2017. 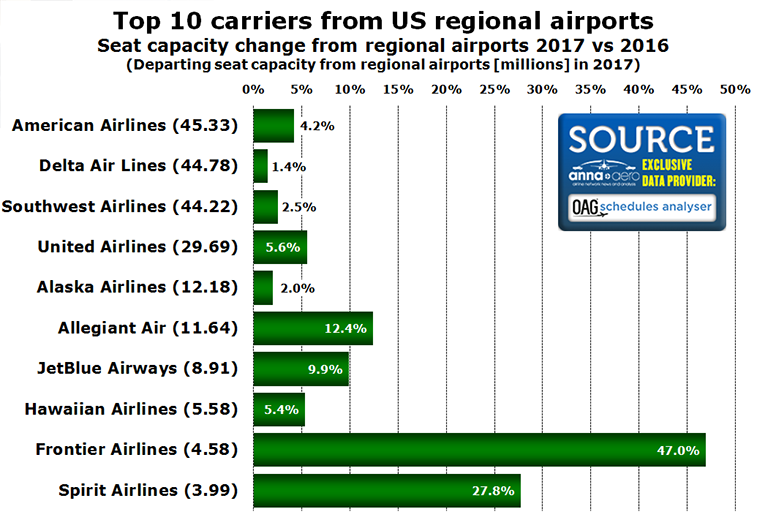 The number one international carrier at the US’ leading regional airports, with regards to seats, is Air Canada. It increased its capacity offering to regional points last year by 12%, taking it to 0.97 million one-way seats. Another international carrier to make an appearance among the leading airlines is WestJet. It increased its seat offering to regional airports in the US by 0.4% in 2017, making it the 14th largest airline in this category. The number one airline from Mexico is Volaris (22nd biggest carrier) which offered over 210,000 one-way seats in 2017.

Given the enormity of the hub-and-spoke strategy for the USB3 (American, Delta and United Airlines), it is no surprise to see that the leading destinations from the US’ regional airports are all hubs in the domestic market, with Atlanta, the world’s busiest airport, being the premier gateway. While the SkyTeam hub did show a 95,900 seat reduction on routes to US regional airports in 2017, it still has 74% more departing seats to facilities below 10 million passengers than second-placed hub Chicago O’Hare. Apart from Atlanta, all airports in the top 12 saw a rise in seats to regional airports last year. 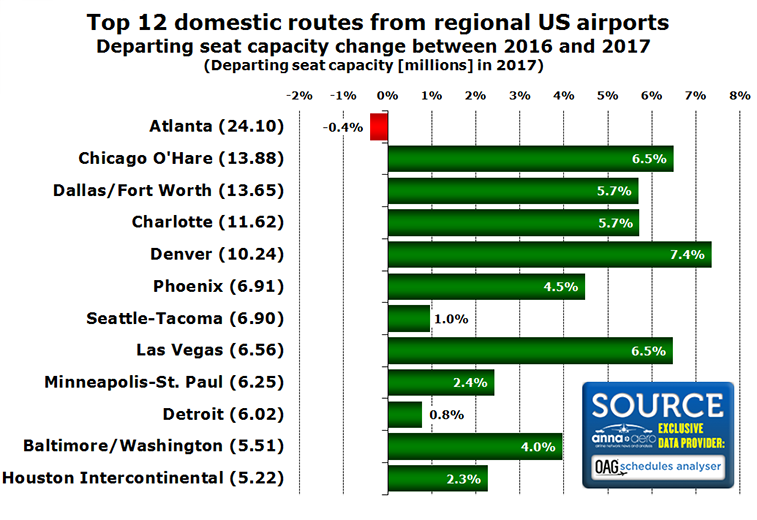 When compiling this data, one detail which sprung to the minds of anna.aero’s data elves was that no New York airport made it into the top 12, with the three leading airports of the Big Apple combined (LaGuardia, JFK and Newark) processing over 129 million passengers in 2016. Newark sits 15th on the top destinations leader board, with it seeing 6.64 million one-way seats to US regional airports last year, with its capacity in this sector growing by 14%. LaGuardia sits 19th on 4.32 million one-way seats (down 3.8% on 2016) and JFK, down in 22nd, reporting 3.47 million departing seats (up 1.7%). Interestingly, if the New York trio’s operations were combined, they would still fall short of the total seats on offer to regional airports from Dallas/Fort Worth in third.

Pittsburgh and Cleveland are on the climb

Before the post-Millennium airline mergers, Pittsburgh and Cleveland were leading hubs in the US, however the loss of based carriers resulted in heavy cuts to passenger numbers. It appears however that both cities are on the up again in terms of its capacity. Cleveland saw a 94% surge in capacity on non-major US airport routes last year, with Pittsburgh’s numbers indicating a 24% upswing, as both of these cities see stronger demand for O&D service. Another airport to see a big gain in non-major airport seats last year was Myrtle Beach, with it reporting a 37% increase, helped by Allegiant Air’s network expansion from the South Carolina airport. Of the top 20 non-major airport destinations, five are in Florida, four are in Alaska (a state dependent on regional flying), and two in Hawaii. 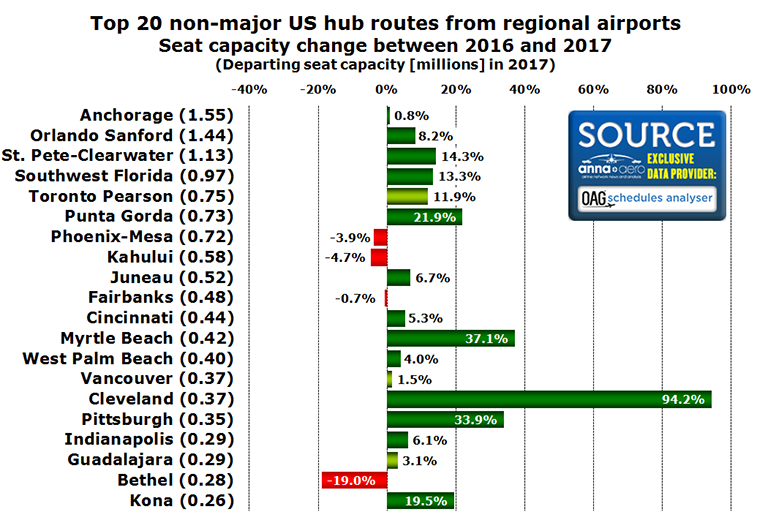 Along with US airports, three international points make it into the top 20 (highlighted in light green), namely Toronto Pearson, Vancouver and Guadalajara. While Pearson, which is the second most popular international airport from the US (all airports) after London Heathrow, and Vancouver (ninth) are no surprise, it was interesting to see that Cancún (third) and Mexico City (fourth) did not make the top rankings from regional airports. One reason for Guadalajara making the top 20 is due to Aeromexico having a strong network from the Mexican city to airports on the US West Coast, including the regional points of Reno-Tahoe, Sacramento and Ontario. One factor which could support the exclusion of Cancún and Mexico City from the list could be that airports on the East Coast that might support a flight to the former, with regards to leisure passenger demand, may not have the appropriate facilities to accommodate international flights (border check).

The domestic market is by far the most dominant from regional airports, controlling over 98% of departing seats last year from the 516 airports. While only a handful of these will support international flights, the sector is steadily growing. The market in 2017 accounted for just 1.7% of seats, but this is a share that has steadily risen by one percentage point each year since 2014, meaning that if this trend continues, international seats will occupy 2.0% of the market in 2020. In terms of growth between 2016 and 2017, non-domestic departing seats increased by 8.3% from regional airports to 3.71 million, this compares to just 5.0% growth in the domestic sector. The leading international market is the transborder crossing with Canada (43% of international departing seats from US regional airports in 2017), with it seeing a 3.6% rise in departing capacity from regional airports last year. Mexico is second, with OAG schedules indicating that the market provided a 12% reduction in capacity, while Puerto Rico sits third (down 14% – classed as international in OAG), the UK fourth (up 45% – Norwegian 737 MAX 8 transatlantic operations to Hartford, Stewart and Providence) and Germany fifth (-3.8%). 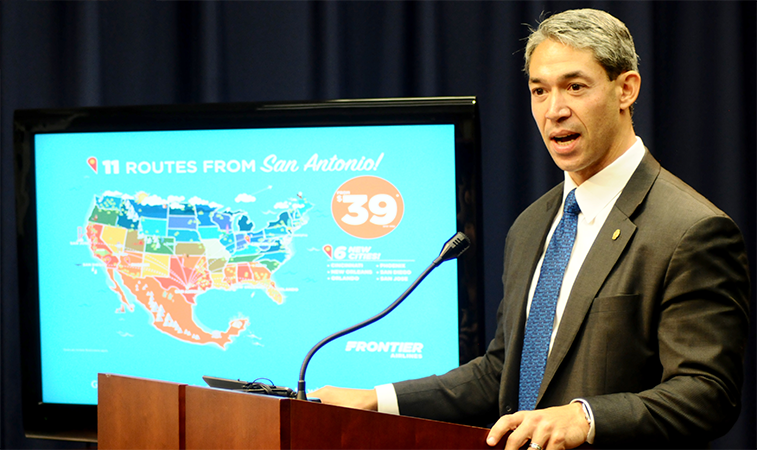 Back in July San Antonio Mayor Ron Nirenberg helped to announce Frontier Airlines’ new services to Cincinnati, New Orleans, Orlando, Phoenix, San Diego and San Jose which all began at the start of W17/18, with the service enhancements meaning that the airline offers 11 routes from the Texas airport. Frontier Airlines is the best airline for growth from US regional airports, with it increasing its seat offering by 47%, while San Antonio is the US’ leading regional gateway.