Italian airports handled over 175 million passengers in 2017, up 6.5% on the year before; Naples leads the growth among medium sized airports 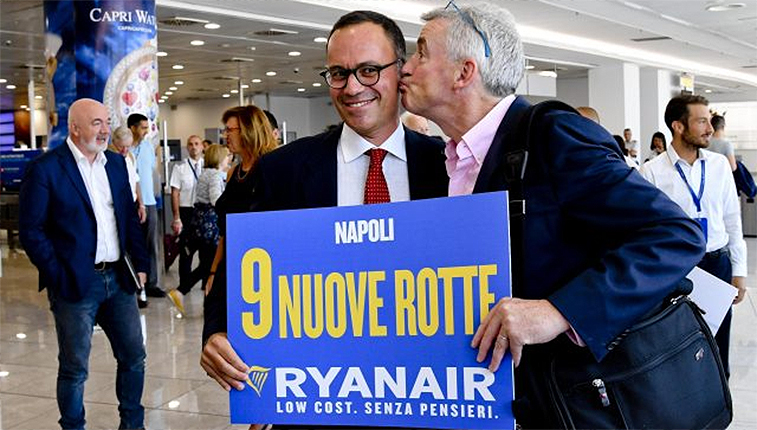 Ryanair is one of many airlines that is in love with Naples at the moment, as witnessed here as the Irish carrier’s CEO Michael O’Leary kisses Armando Brunini, CEO of Naples Airport (while Ryanair’s CCO David O’Brien watches on in shock). Last year the airport posted a 27% increase in traffic, making it Italy’s fastest-growing airport. Ryanair further strengthened its position as Italy’s largest airline in 2017, upping its capacity offering by 7.9% to 52.58 million seats.

Italy is Europe’s sixth largest aviation market, with 106.84 million one-way seats in 2017, with the country sitting behind Turkey (108.38 million) but ahead of Russia (82.63 million – departing seats from the European part of Russia). Through its leading airports, Italy greeted over 175 million passengers in 2017, the highest figure ever recorded. This is a result which has been achieved despite the market facing various challenges, including the uncertainty of the nation’s flag carrier Alitalia and the country’s financial issues. Nonetheless, it looks as though Italy is showing no indication of its growth slowing down.

Last year Italy’s leading airports handled over 175.15 million passengers, up 10.7 million (6.5%) versus 2016. The result of last year is the best rate of growth for Italy since 2010, a year when traffic grew 7.0%. In terms of net increase in the amount of passengers handled, last year was the best recorded since 2007, a year which saw Italian airports process 12.45 million more passengers than the year before. 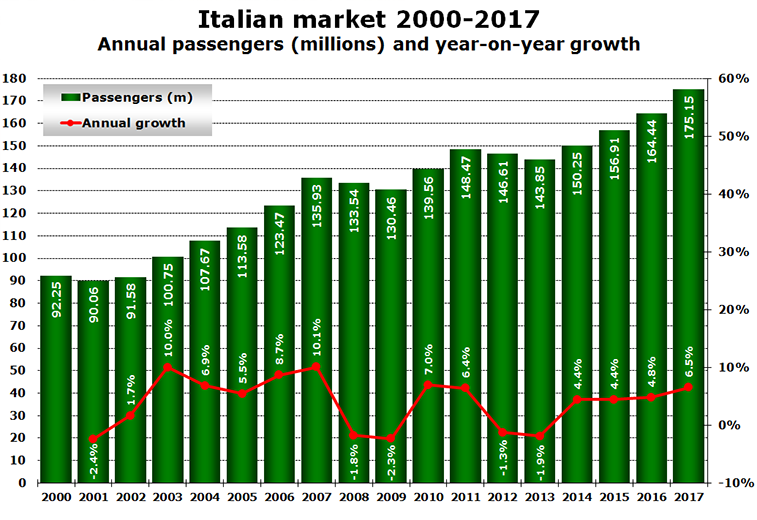 Between 2014 and 2017, Italy recorded an average increase in traffic of 5.0%, helped with the 6.5% rise last year. If this average rate of growth is achieved in 2018, Italy should process just under 183.91 million passengers in 2018, that’s a net gain of over 8.75 million travellers. If this forecast becomes reality, it means that passenger numbers from Italy will have doubled since the turn of the millennium.

Last year the Italian domestic market saw passenger traffic rise 3.0%, with over 61.91 million passengers travelling on internal routes in 2017. It appears that the international market is performing better, with it observing an 8.6% increase in traffic according to Assaeroporti statistics, with 112.87 million passengers flying to/from Italy last year. It means that the domestic sector accounts for just over 35% of passengers from Italy, a market share that has dropped from 38% in 2014. Splitting the international sector into EU (including Switzerland) and the rest of the world, the former has grown its share from 43% in 2014 to 50% last year, with the market providing 23.14 million more annual passengers in 2017 than it did four years ago. For the rest of the world, its market share dropped from 18% in 2014 to 14% last year, highlighting that the main focus of Italy’s overseas passenger drive in recent years has been to the EU and Switzerland.

Naples shows the rest how it is done

Last year Naples processed just under 8.58 million passengers, a very respectable 27% rise over the 6.78 it handled in 2016. The result of this growth means that Naples was Italy’s fastest-growing airport in 2017, narrowly beating Rimini (the country’s 30th largest airport in terms of passenger numbers) which reported a 26% increase in passengers last year according to Assaeroporti statistics. Of Italy’s leading airports, 10 posted drops in passenger traffic, including the nation’s leading airport Rome Fiumicino, with it seeing a 1.9% drop in passengers last year. 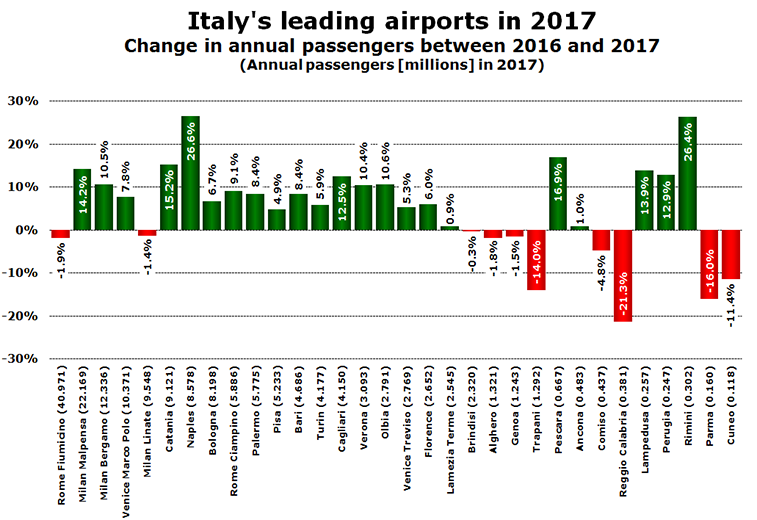 In terms of net passenger growth, it is Milan Malpensa which leads the Italian charge, with it processing just under 2.75 million more passengers last year than it did in 2016. Following up in second is Naples with an additional 1.80 million customers, with Catania (1.21 million), Milan Bergamo (1.18 million) and Venice Marco Polo (0.75 million) completing the top five list for most additional passengers in 2017.

Ryanair strengthened its lead as the number one airline in Italy last year, advancing its seat capacity by 7.9% in 2017 to 52.58 million, whereas Alitalia saw further cuts, with its seat offering reducing by 1.4%. The best airline for growth among Italy’s top carriers was Blue Air (11th largest airline), with it advancing its seat availability by a mighty 46% last year. Last year the airline launched 15 routes from Italy according to OAG schedules. The airline is already on the case for launches in 2018, recently starting its latest route from its Turin base, a link to Stockholm Arlanda last month. From 25 March, Blue Air will launch its next route from Turin, a three times weekly link to Paris CDG. 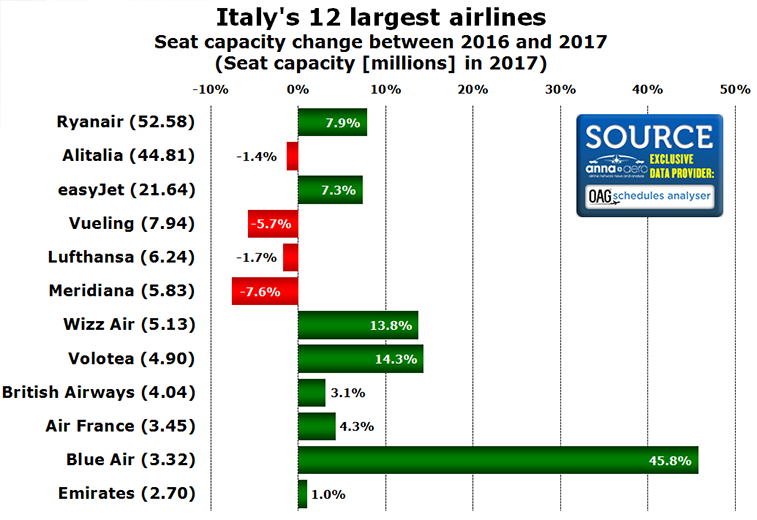 To give an idea of just how big Ryanair is in Italy, last year the carrier occupied just under 25% of all seats from the nation in 2017. To give a representation of its presence in other European nations, in Spain Ryanair held a 17% share of seats last year, in the UK it had a 14% share, Germany 6.4% and France 5.0%. Only two nations in Europe’s top 20 aviation markets saw Ryanair post a higher market share than its result in Italy, with the Irish LCC occupying 41% of seats from its home market of Ireland (16th largest market) and 28% in Poland (14th). Overall, Ryanair is Italy’s number one market, with it flying 4.6% more seats from Italy last year than the UK, the airline’s second-largest nation.

LCCs closing in on 50% of the market

Back in 2008, LCCs occupied just over 25% of seat capacity in Italy, with the low-cost sector steadily growing its market share year-on-year ever since, with it now controlling just under 49% of the nation’s capacity. By recording an annual average 2.6 percentage point gain of the market since 2008, it means that the LCC sector is likely to break the 50% barrier in 2018, making it the majority provider of Italian seats. 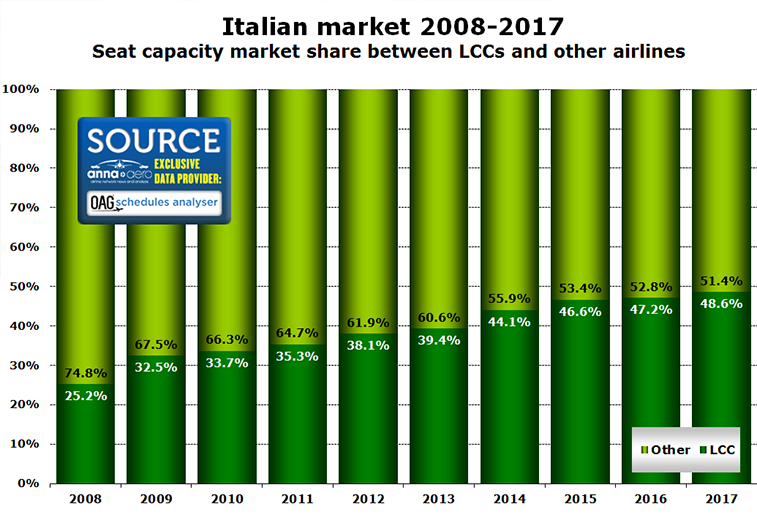 The biggest spike for LCC market share growth came in 2009, when it improved its position by 7.3 percentage points, helped with other airlines posting a 12% (15.87 million seats) cut in capacity. Overall since 2008, the number of annual LCC seats from Italy has grown by 125%, with 103.93 million low-cost seats being flown last year, the first time it has passed the 100 million mark. In relation to other carriers, the number of seats being flown by non-low-cost brands actually fell 20% from 137.12 million seats in 2008 to 109.87 million last year.

We are only one month into 2018, and Italy has already seen the birth of a new operator. FlyValan, a regional carrier using a sole ATR 72-500 at the moment, recently started operations from Genoa to Trieste, a route it is operating three times weekly. The airline hopes to add Brussels, Geneva and Zurich services in the coming months according to its website. Along with this development, other suggestions of potential changes to the Italian aviation landscape include easyJet and Wizz Air both still mulling a potential move for Alitalia’s short-haul network, the enhancements and future strategy of Meridiana as it receives its first 737 MAX 8s, plus how the new entrant of last year, Ernest, will develop in its second year of operation. 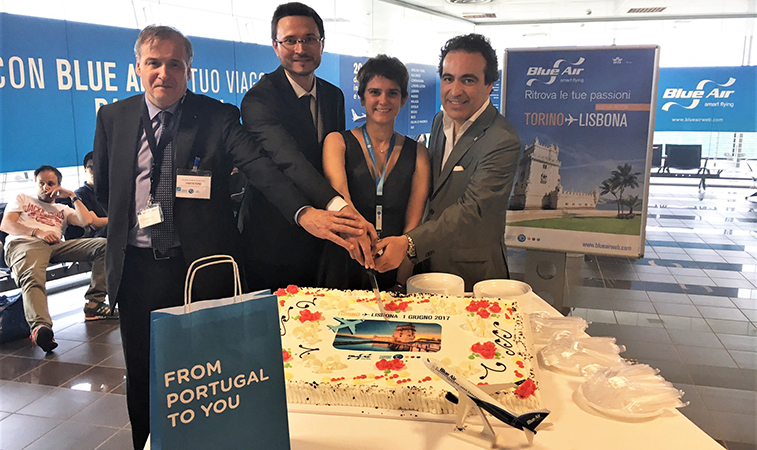 Cutting the cake in Turin to open Blue Air’s route to Lisbon on 1 June last year were: Albino Naldo, ‎Sales Representative Piedmont of Blue Air; Adrian Duru, Product Manager of Blue Air; Francesca Soncini, External Relations Manager of Turin Airport; and Marcelo Rebanda of the Portugal Tourism Board. For 2018 the airline has already launched flights from Turin to Stockholm Arlanda, while a three times weekly link to Paris CDG will begin on 25 March. Blue Air was one of the leading carrier’s for growth from Italy in 2017, increasing its seat capacity by 46% to 3.32 million seats.