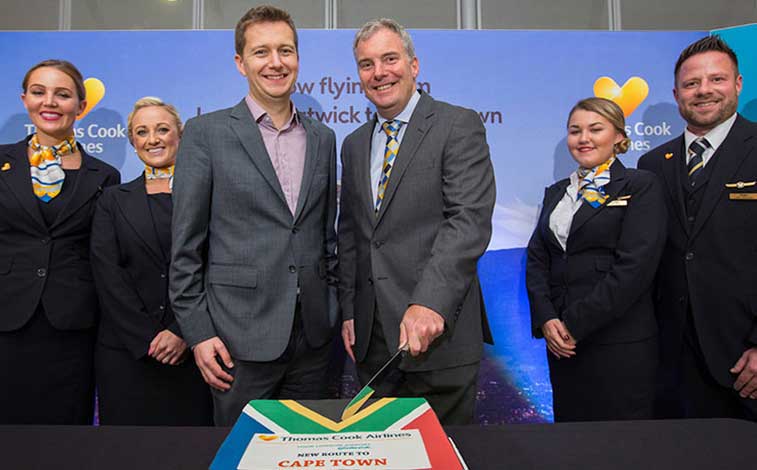 Cape Town is situated on South Africa’s south-west coast and its airport is the second largest in the country, with only Johannesburg handling more passengers. Statistics from Airports Company South Africa show that Cape Town’s passenger numbers increased from 8.6 million in 2014 to 10.7 million in 2017. This represents a 24% increase in traffic in the space of just three years. Since full-year passenger figures were only available back to 2014, this analysis focuses on capacity data to provide a more detailed view of network developments at Cape Town over the past 10 years.

OAG schedules reveal a relatively stagnant situation at Cape Town from 2008 to 2014. In 2008, there were 5.3 million departing seats available. By 2014 this figure had increased by just 1.3% to 5.4 million seats. During the intervening period, there was one significant spike in year-on-year growth, which saw seat numbers increase by 6.9% in 2011, before cuts in 2013 led to a 7.4% reduction in departing capacity. Subsequently, 2013 saw the lowest departing seat numbers from Cape Town at any point over the past 10 years. One contributing factor to the decline that year was the demise of South African LCC 1time, which provided up to 600,000 departing seats from 2009 to 2011 and around 450,000 in 2012. In more recent times the airport has seen a healthy expansion in available capacity. Departing seat numbers increased by more than 25% from 2014 to 2017. A number of factors appear to have driven this growth, including the introduction of services by new market entrants, plus extra capacity being added by incumbent carriers. 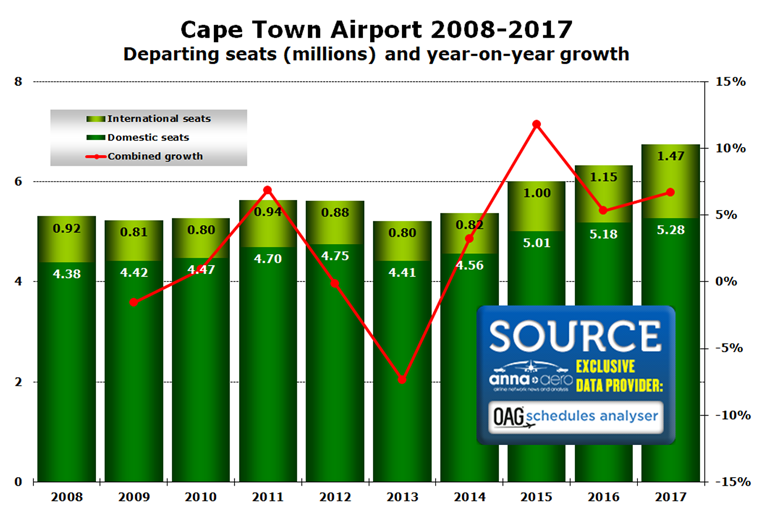 Domestic services have accounted for the majority of Cape Town’s capacity over the past 10 years and represented 83% of its departing seats in 2008. This increased to as much as 85% of total capacity as recently as 2014, but has since fallen back to represent 78% of departing seats in 2017. This was after international seat numbers experienced a larger percentage growth than domestic demand during the airport’s recent growth spurt. The seats available on domestic services grew from 4.56 million to 5.28 million between 2014 to 2017, which represents a 16% rise. In comparison, international seats numbers increased from 820,000 to 1.5 million, which represents 80% growth.

South African Airways (SAA) is the largest carrier at Cape Town, accounting for 23% of the airport’s departing seats in 2017. This includes capacity flown under the flag carrier’s code by South African Airlink and South African Express Airways. Most of SAA’s seats from Cape Town are operated on internal services and it was the largest published carrier on domestic links in 2017. British Airways was the next largest carrier at Cape Town last year, although the majority of its seats were operated under the BA brand by its South African franchisee Comair. In all, 82% of BA’s seats were flown by Comair on domestic links, with the remainder operating on long-haul connections to London Heathrow and London Gatwick. Comair’s LCC Kulula.com also featured amongst the top-ranked airlines at Cape Town. In total, four of the five top airlines were South African, three of which were LCCs. The other operators in the top 12 were all full-service carriers, including two more from Europe (KLM and Lufthansa), two from the Middle East (Emirates and Qatar Airways), two in Africa (Air Namibia and Ethiopian Airlines) and Turkish Airlines. 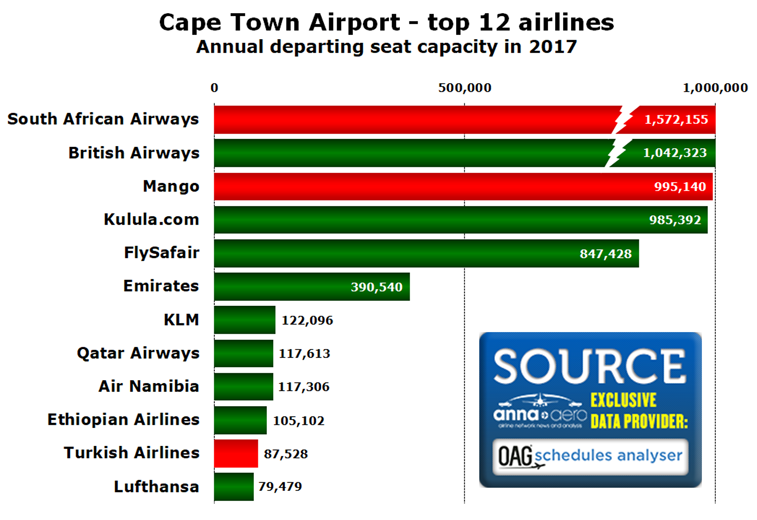 Lufthansa, FlySafair, Emirates and Air Namibia experienced the strongest growth at Cape Town from 2016 to 2017, increasing their departing capacity by 73%, 35%, 21% and 21% respectively. These four carriers also witnessed some of the strongest capacity increases during the airport’s recent growth spurt from 2014 to 2017. LCC FlySafair was a new entrant to the market in 2014 and has gone from providing no seats at Cape Town in 2013, to offering nearly 850,000 on domestic services last year. Lufthansa added a new connection to Frankfurt in 2016, while Emirates and Air Namibia increased capacity on existing services.

Three of the top-ranked carriers (highlighted in red) experienced a drop in seat numbers from 2016 to 2017 and indeed, during the three-year period from 2014. OAG schedules show that Turkish Airlines saw the most significant cuts, reducing seat numbers by 17% from 2014 to 2017, although it should be noted that the reductions have come from the discontinuation of services to Istanbul Atatürk via Johannesburg and Durban. The airline actually more than doubled its direct capacity to the Turkish capital from 2016 to 2017 and now only serves it home hub non-stop. Since the chopped flights were operated via other South African airports, it is unlikely that the full compliment of seats would have been available on departure from Cape Town, so overall capacity to Atatürk could even have increased, although it is not possible to prove this theory from the information available. About one-quarter of Ethiopian Airlines’ departing capacity also operates via Johannesburg, in this case onward to Addis Ababa.

Johannesburg tops the domestic route table from Cape Town, accounting for more than half of all departing seats on internal services in 2017. The link to South Africa’s largest city was served by 326 frequencies, operated by seven different carriers, during the week commencing 1 August 2017. Seven of the top 12 domestic routes saw increases in capacity from 2016 to 2017 with Hoedspruit, Nelspruit and Lanseria leading the way. Five South African links (highlighted in red) faced capacity cuts, with the largest coming on services to George and Bloemfontein, with FlySafair withdrawing flights to the former airport. The leading international connection from Cape Town in 2017 was Dubai, with Emirates providing three daily 777-300 services to its home hub. The UAE was the largest international country market from the airport last year, followed by the UK which had links from Heathrow and Gatwick. In total five of the top international destinations were in Europe and four were in Africa. Most of the top 12 international sectors experienced an increase in seat numbers from 2016 to 2017, with Frankfurt, Addis Ababa and Atatürk seeing the strongest growth. The latter two destinations prospered from the addition of direct flights at the expense of one-stop services, as already described. Only one of the top 12 international routes (highlighted in red) saw a fall in seat numbers, with Munich losing more than a quarter of its capacity in 2017, as Lufthansa appeared to refocus its attention on connecting Cape Town with it Frankfurt hub. One new international link introduced last year was a service from Cologne Bonn, operated by Eurowings.

anna.aero’s New Routes Database shows that one new route has already been announced for Cape Town in 2018. In July, the airport is due to welcome a new international connection to Europe, in the form of an Austrian Airlines connection to Vienna. 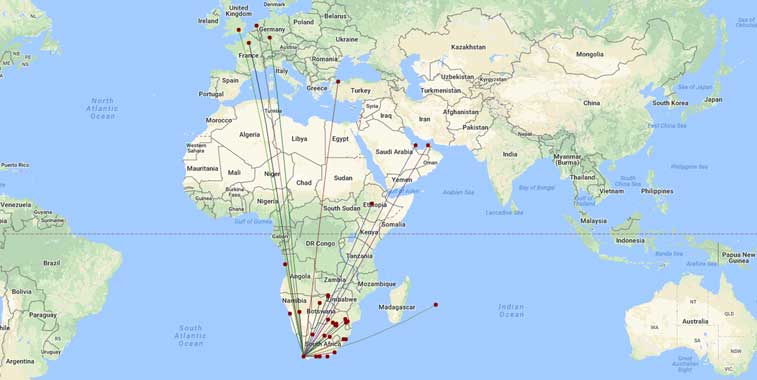 The majority of Cape Town Airport’s departing seats are flown on domestic services, but in recent years international capacity has been growing at a faster rate. The top international link is Dubai, which is operated three times daily by Emirates, but five of the largest country markets are in Europe, while another four are in Africa. Some of the longest-haul destinations include London links to Heathrow and Gatwick.