Swoop swings into the Canadian market with low fares and five initial routes, however schedules suggest that there’s room for more 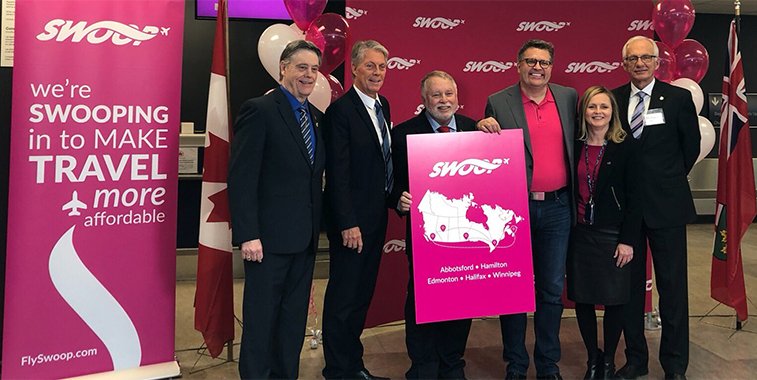 Swoop, the ULCC set-up by WestJet, announced its first batch of routes on 1 February. Among those unveiling the new services at Hamilton Airport were: Fred Eisenberger, Mayor of Hamilton; Ted McMeekin, Member of Provincial Parliament, Ancaster-Dundas-Flamborough-Westdale; Bob Cummings, EVP of Strategy at WestJet (and the executive member responsible for the launch of Swoop); Cathie Puckering, Acting President and CEO of Hamilton Airport; and Bob Bratina, Member of Parliament for Hamilton East-Stoney Creek. Based on schedules so far it requires three initial aircraft, however the timings of some services suggest that more routes will be announced for this year’s schedule.

Swoop, the new ULCC set-up by WestJet, announced its first batch of routes on 1 February. Its inaugural base will be at Hamilton, initially launching four sectors from the Ontario airport to Abbotsford, Edmonton, Halifax and Winnipeg, with some ticket prices being below C$100, which is cheap for the Canadian market. Swoop has also confirmed that it will link Abbotsford to Edmonton, with an aircraft also being based at the former airport. “This is the first time that a real ULCC is now available to Canadians,” said Bob Cummings, WestJet’s EVP, Strategy and the executive member responsible for the launch of Swoop. “We thank our launch airports for their support in getting Swoop off the ground. Low-cost is the key and Hamilton and Abbotsford are examples to be followed. Keeping costs low so that the savings can be passed on to the travellers is what Swoop is all about. These airports are on the exact same page as us and we have worked side-by-side to make this happen.”

Flights from Hamilton to Abbotsford and Halifax will begin on 20 June, while Edmonton and Winnipeg services will start five days later. Apart from Abbotsford, all other routes from Hamilton are currently flown by WestJet, with it ending services the day before Swoop sweeps them up. The connection between Abbotsford and Edmonton will launch on 25 July, again, a route being taken over from WestJet. While Hamilton to Abbotsford will be a new sector for the WestJet-owned operator, it will face competition from Flair Airlines on the city pair, with the latter airline claiming to be Canada’s first ULCC, having been the operating carrier of now-defunct virtual ULCC NewLeaf which launched in 2016.

The table below shows Swoop’s operation once the first tranche of routes have all launched. At first glance it would appear that two aircraft will be permanently stationed in Hamilton, with another being positioned in Abbotsford to operate the three times daily link to Edmonton. Swoop will use ex-WestJet 737-800s, with it planning to operate six by the end of this year. 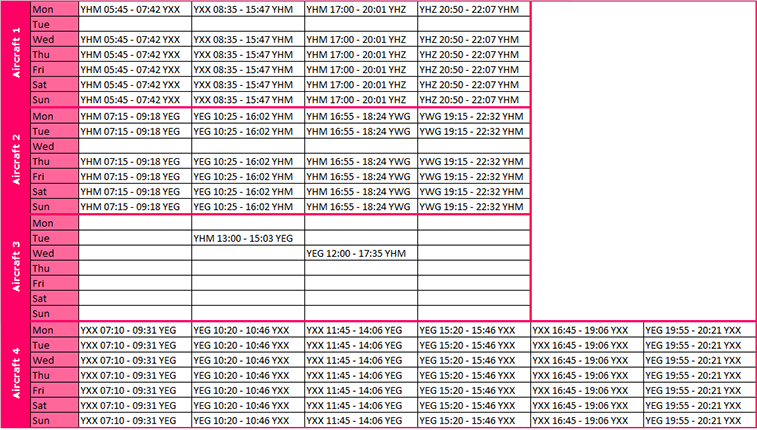 The airline will link Hamilton to Abbotsford, Halifax and Winnipeg six times weekly, with the first draft of the schedule showing that aircraft one will not be flown on Tuesdays and aircraft two on Wednesdays. While in its press release the carrier stated that it will link Hamilton to Edmonton six times weekly, a review of its online booking engine says otherwise, with a second daily rotation bookable on Tuesdays at 13:00 from Hamilton, while from the Edmonton-end of the sector a daily service is being offered, with a 12:00 departure on Wednesdays currently bookable as of 2 February. Based on these timings, it means that a third aircraft will be based in Hamilton, but given the return departure time from Edmonton on the Wednesday, it too could see a based aircraft. Although the timings of the extra flight between Hamilton and Edmonton could fit into the schedules of aircraft one and two, with one operating the outbound and the other aircraft on the return, anna.aero thinks otherwise. While this option would suggest w-pattern routes could be offered from Edmonton, given that the airline is hoping to operate six aircraft by the end of 2018, anna.aero has suggested that these flight times will be utilised by a fourth aircraft. With that all but one of the routes for Swoop are being taken over from WestJet, it is highly likely that its next services will also be routes currently flown by its parent company.

Hamilton appears to be an airport that is on the move, handling over 333,000 passengers in 2016. With seat capacity nearly doubling last year, growing by 99%, it is certainly a good foundation for launching new flights. While this is great news for Swoop and indeed the first airports involved, competition will not be too far behind. In an interview with anna.aero back in September, Canada Jetlines, a new ULCC also planning to set-up operations in 2018, with Hamilton and Kitchener being airports where it will be initially basing aircraft. On that note, it also confirmed it was hoping to launch on 1 June, meaning that Hamilton could turn into a ULCC blood bath this coming summer if Canada Jetlines selects the same sectors as Swoop. While Swoop’s press release stated that it will link Hamilton to Edmonton six times weekly, the carrier’s booking engine is showing an extra weekly rotation between the two cities. A second-daily outbound service is currently bookable from Hamilton to Edmonton, with a Wednesday rotation being offered from the latter city back to the Ontario airport. This suggests that four aircraft will be need for the first tranche of routes, meaning more sectors should be announced shortly to fill the current schedule gaps.