Alliance Airlines reports capacity boost due to additional Fokkers from Austrian Airlines; will fly for FlyPelican from Adelaide to Newcastle 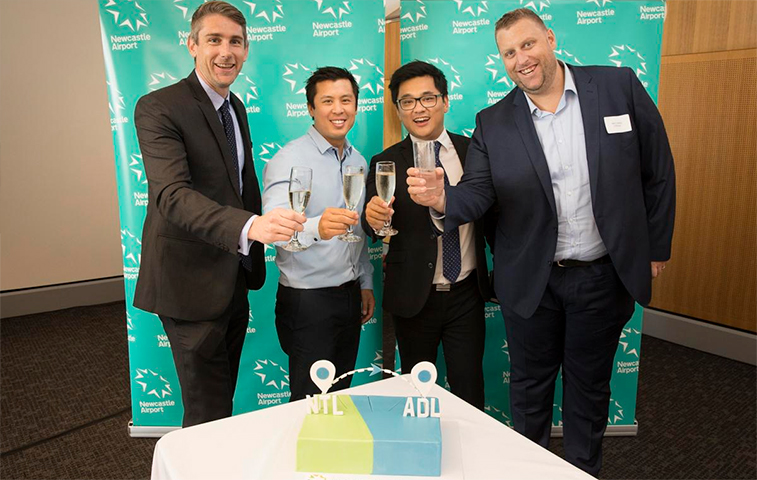 Last month Australian regional carrier FlyPelican announced a three times weekly service between Newcastle and Adelaide, a route that will be flown using Fokker 70s or 100s, which will be operated using wet-leased equipment from Alliance Airlines. Seen celebrating the news of the route are: Scott Snodgrass, Aviation Analyst, Adelaide Airport; Allan Woo, Airlines & Partnerships Manager, Newcastle Airport; Jonathan Cheong, Head of Aviation Business Development, Adelaide Airport; and Martin Hawley, Director of FlyPelican. Alliance Airlines currently operates a scheduled service between Adelaide and Olympic Dam, the only route flown by the carrier under its own brand.

Alliance Airlines is a major operator of the F50, F70 and F100, with its fleet currently compromising of 32 active aircraft according to ch-aviation. Its average fleet age is just under 25 years old, with the fleet size increasing towards the end of 2015 as the Australian carrier obtained 15 F100s and six F70s from Austrian Airlines. In its announcement of the acquisition from the European carrier for $15 million (USD), the airline stated that the strategic decision to purchase the aircraft was due to reduced activity in the resources sector. This resulted in the airline undertaking a number of measures to improve its cost base and efficient delivery of services to its clients, and to look to create more revenue opportunities. Alliance Airlines is mainly a charter operator serving routes to mining communities and has a number of bases across Oceania. However, the airline also operates services on behalf of a number of airlines in Australia, along with a few of its own scheduled services.

Record number of scheduled seats in 2017 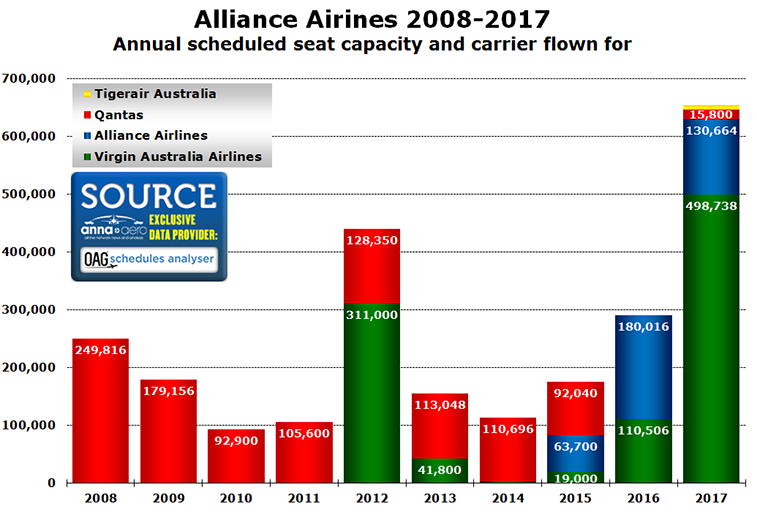 Alliance Airlines operated on behalf of Tigerair Australia for the first time in 2017, with the latter carrier bringing in the former operator due to fleet issues during the Northern Hemisphere summer season. Until 2012, Alliance Airlines mainly flew for Qantas, but since then, it has also flown for Virgin Australia Airlines. In 2015 the carrier started its own scheduled operations, taking on Qantas’ service between Adelaide and Olympic Dam, According to OAG and its own booking engine, this is currently the only scheduled route that Alliance Airlines operates under its own brand. Since 2015, the carrier has further strengthened its relationship with Virgin Australia, with its flying operation for the latter having been reduced between 2012 and 2014.

Given that it is the headquarters of Alliance Airlines, it is no surprise to see that Brisbane tops the rankings of the carrier’s leading airports. The Queensland base accounted for 38% of departing scheduled seat capacity in 2017, with the top 12 airports combined accounting for 96%. Airports which sit just outside the top 12 include Mackay and Melbourne. Based on schedules for February, Alliance Airlines is operating 254 weekly scheduled flights. 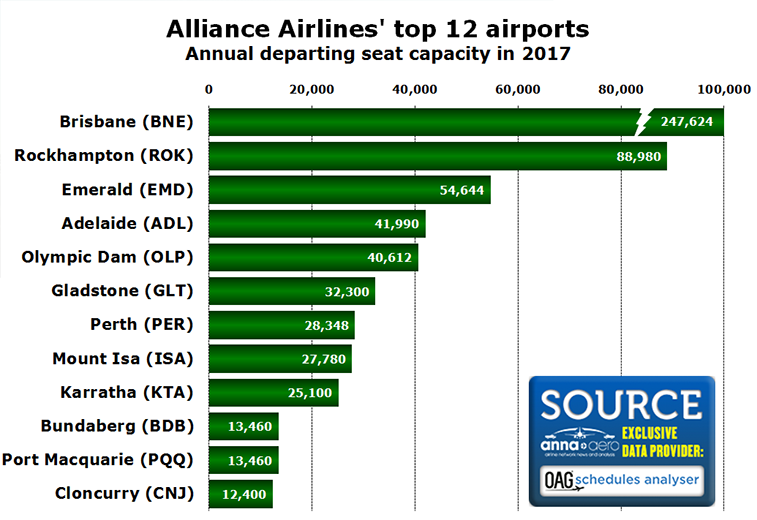 Alliance Airlines mainly operates fly-in fly-out (FIFO) services. It serves these types of flights to 28 mine sites connecting workers to some of the most remote mining and energy projects across Australia. Some of its major clients include energy companies such as BHP Billiton, Newcrest Mining, CITIC Pacific Mining, Incitec Pivot, South32, Santos, and OZ Minerals. In 2017 Alliance Airlines added new routes in Queensland, as Virgin Australia ended its ATR 72-500 and -600 operations in Brisbane. The former began operating routes from Brisbane to Bundaberg, Gladstone and Port Macquarie in July, which are sold under the Virgin Australia brand. Alliance Airlines also acts as the operating carrier for Virgin Australia on three more routes, from Brisbane to Cloncurry, Mount Isa and Rockhampton, under a separate 12-month contract. For Qantas, Alliance Airlines flies from Perth to Broome, Karratha, Port Hedland and Newman.

To begin flying for FlyPelican

FlyPelican, a regional Australian operator based in Newcastle, which has a fleet consisting of Jetstream 32s, has announced that it will fly between the East Coast city and Adelaide from March. The flights start on 26 March and will be offered three times weekly with equipment wet-leased from Alliance Airlines. 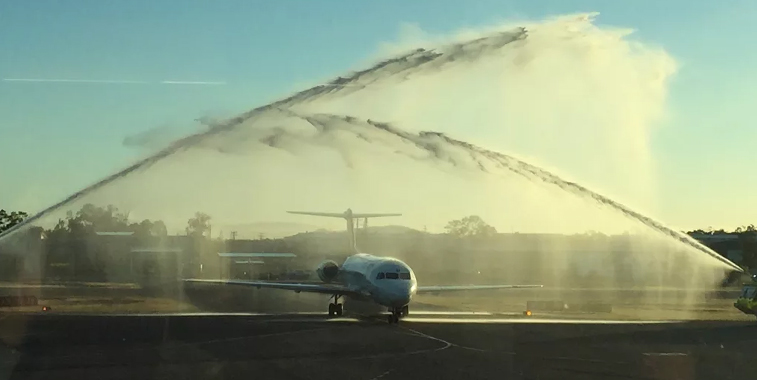