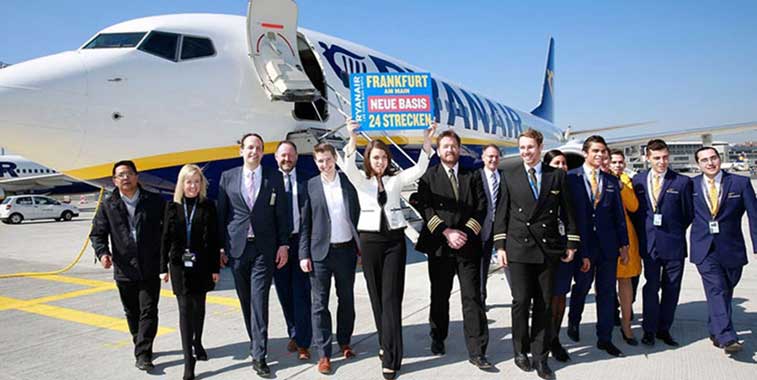 Capacity between Germany and Spain grew by more than one-third from 2012 to 2017. Ryanair is the largest carrier in the market and opened a number of services to Spain from its new base at Frankfurt in 2017. Seen celebrating the ULCC’s first Frankfurt routes last April are Evelin Horvath, Ryanair Marketing and Sales Executive; Sinead Kelly, Ryanair Safety and Compliance Manager; Dr. Pierre Dominique Prümm, EVP Airside and Terminal management Fraport; Adrian Dunne Ryanair Director of Operations; and Neal McMahon Ryanair Route Development Manager.

There was a 2.7% increase in seat numbers between Germany and Spain from 2016 to 2017, with two-way capacity growing from 31.4 million seats to 32.2 million. The Germany-Spain market is significantly larger than two other European country pairs that anna.aero has recently analysed, with the Franco-German and Italy-Spain markets only accounting for 10.6 million and 15.9 million two-way seats respectively in 2017.

There was inconsistent growth in the Germany-Spain market from 2008 to 2012. In 2009, seat numbers were cut by 7.6%, probably due to the global recession, before a slight recovery in 2010 saw a 4.8% increase. Seat numbers remained stagnant in 2011 before falling by 2.1% in 2012. These peaks and troughs resulted in capacity falling from 25.1 million seats in 2008 to 23.9 million in 2012. Since then the market hasn’t looked back, and has enjoyed five consecutive years of growth. The largest year-on-year increase came from 2015 to 2016, with seat numbers growing by almost 11%. From 2012 to 2017 capacity between these two European heavyweights grew by more than one-third. 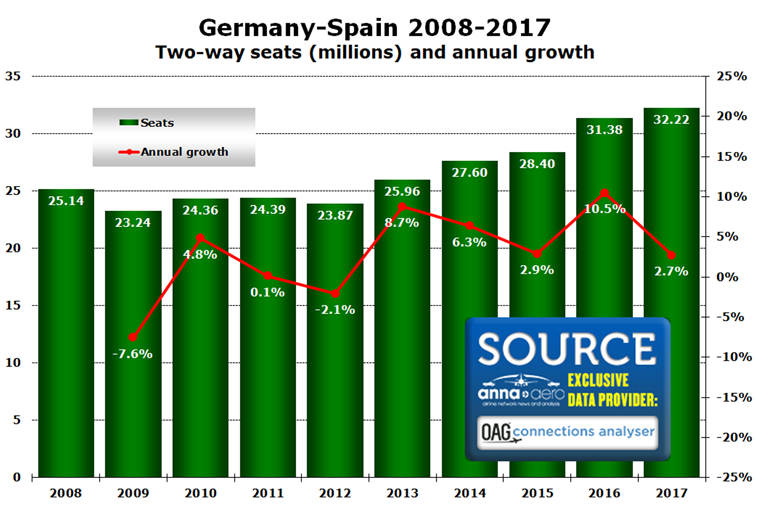 The average capacity per departing flight in the Germany-Spain market increased from 166 seats in 2008, to 183 in 2017. Narrow-body aircraft accounted for 98% of the capacity on offer in 2017, with 1.0% flown on regional jets and 0.9% operated by wide-body types. The largest operators of wide-body capacity between Germany and Spain were LATAM Airlines and Eurowings. LATAM uses 787-9s on fifth freedom services linking Madrid and Frankfurt to its home hub Santiago, in Chile.

The top 12 airports in this country pair, based on departing seats in 2017, feature seven in Germany and five in Spain. This analysis considers there to be four main hubs in the market; Frankfurt and Munich in Germany, and Barcelona and Madrid in Spain. Although these airports occupy four of the top six positions in the league table, two of the top three are non-hub facilities. Palma de Mallorca was by far the largest departure point, accounting for 16% of all capacity in 2017, while Düsseldorf came in third. Palma’s prominence, along with ninth and eleventh place finishes for the Canary Islands pair of Gran Canaria and Tenerife South, suggests that leisure travellers, visiting Spain from Germany, are unsurprisingly an important driver of demand between the two countries. 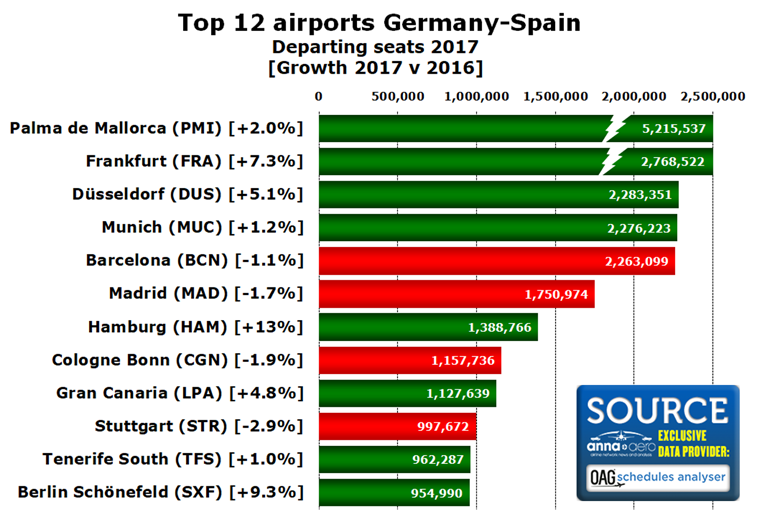 Eight of the top 12 airports experienced an increase in capacity from 2016 to 2017. The strongest growth took place at three German airports, namely Hamburg, Berlin Schönefeld and Frankfurt, with seat numbers increasing by 13%, 9.3% and 7.3% respectively. There were capacity cuts at four of the top-ranked airports (highlighted in red) although most of these were marginal. The largest reduction in seat numbers came at Stuttgart which saw 2.9% fewer seats departing for Spain in 2017 compared to the previous year. Outside of the top 12 facilities, trends worthy of note include an 18% increase in seats for Malaga and a 20% drop in capacity at Berlin Tegel.

Non-hub airports have provided the majority of departing seats between Germany and Spain over the past 10 years. In 2017, they accounted for 23.2 million departing seats, which is equivalent to 72% of total capacity. The proportion of the market served by non-hubs has remained fairly consistent, remaining at 73% from 2008 to 2013 before dropping to 70% in 2015 and then rebounding to 72% in the last two years. The number of departing seats available from non-hub airports in the Germany-Spain market increased by 27% from 2008 to 2017. The four main hubs in this market accounted for 9.1 million departing seats in 2017, up 32% from 6.9 million in 2008. 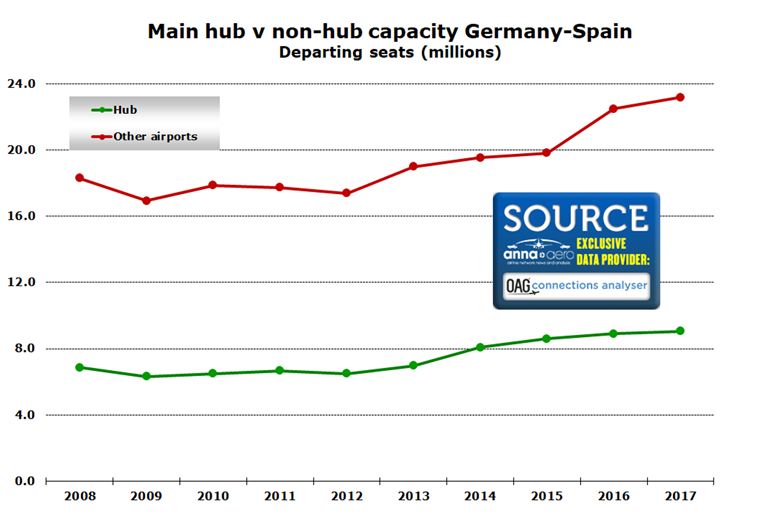 Ryanair ahead of German and Spanish carriers

Ryanair was the largest carrier in the German-Spanish market in 2017, providing 16% of the available seats. Half of the top 12 carriers were German operators, while only two were Spanish. Norwegian saw the strongest growth amongst the top-ranked airlines, increasing its capacity between Germany and Spain by 78% from 2016 to 2017. The LCC opened 10 new routes between the two countries in 2017, six of which serve Düsseldorf, with three serving Hannover. Ryanair launched services from Frankfurt in 2017, including 10 links to Spanish destinations, and this contributed to a 19% rise in its capacity in this country pair. 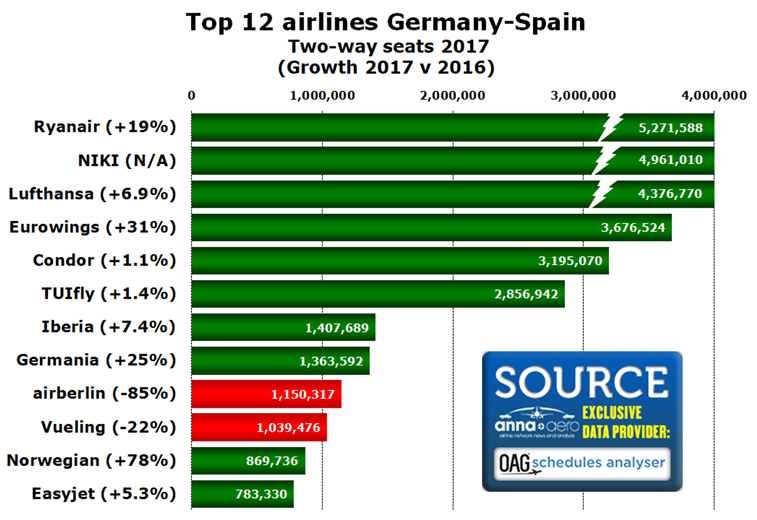 Two of the top 12 airlines (highlighted in red) cut seats in the market in 2017. The largest capacity reduction came from airberlin, which operated 85% fewer seats in 2017, partly because it ceased operations before the end of last year. However, another reason for the significant reduction in seats was the apparent transfer of capacity, before operations ended, from airberlin to its subsidiary NIKI, which was the second largest carrier in the Germany-Spain market in 2017, having not flown between the two countries in 2016. It remains to be seen if NIKI will re-start operations in 2018 and if it does, under which guise.

anna.aero’s New Routes Database shows that airlines launched 50 new services between Germany and Spain in 2017. Early indications are that the positive growth trend is set to continue in 2018, with 24 new services already announced to launch this year. 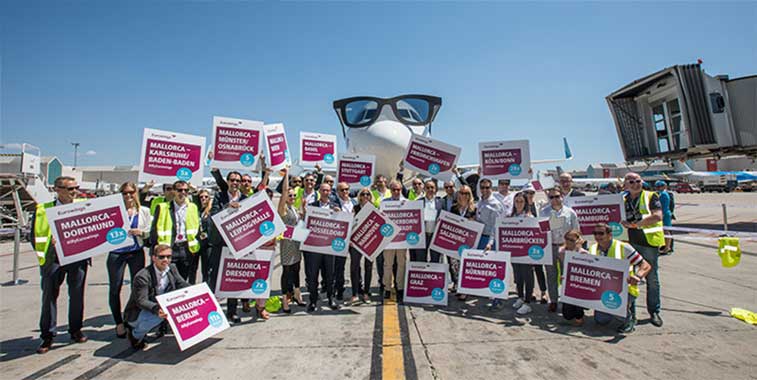 Half of the top 12 carriers in the Germany-Spain market in 2017 were German. Eurowings was the fourth-largest operator on the country pair last year. In April 2017, the German LCC opened a base at Palma de Mallorca, the largest airport for departing seats between Germany and Spain. The airline was due to open 11 routes to Germany from the Spanish holiday hot spot last year.