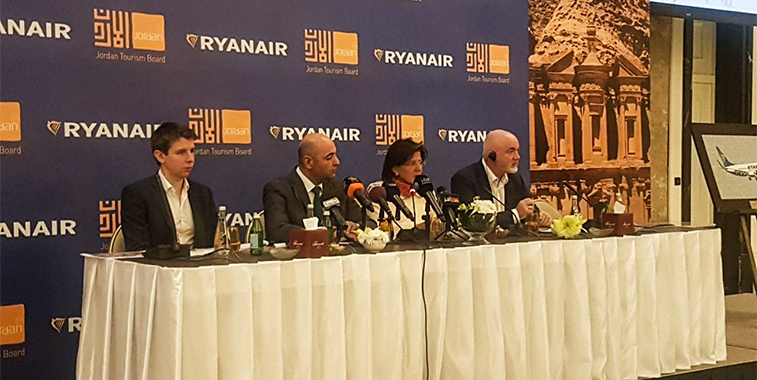 Taking part in a press conference at the Jordan 2018 Agenda Conference in Amman on 4 February to unveil Ryanair’s new routes to the Middle Eastern country were: Neal McMahon, Director of Route Development, Ryanair; Dr. Abed Al Razzaq Arabiyat, MD Jordan Tourism Board; Lina Mazhar Annab, Minister of Tourism & Antiquities and Chairwoman of the Jordan Tourism Board; and David O’Brien, CCO of Ryanair. The carrier will begin serving Jordan in March with a four times weekly link from Paphos, while 13 more routes will begin in W18/19. Based on current schedules, Ryanair looks set to become Jordan’s third biggest carrier, placing it just behind Emirates but ahead of Saudi Arabian Airlines.

Ryanair has confirmed that Jordan will be its second country market in the Middle East, having begun flights to Israel in W15/16. The first route to Jordan will be a four times weekly (Mondays, Tuesdays, Wednesdays and Saturdays) link between Paphos and Amman, while the remaining services that have been announced will start towards the beginning of the W18/19 season, some three years after the carrier’s initial launch to the Middle East. Speaking at the airline’s press announcement of the new services at the Jordan 2018 Agenda Conference in Amman, David O’Brien, CCO of Ryanair, said: “Ryanair is pleased to announce our entry into the Jordanian market from March 2018, initially with one route from Paphos to Amman commencing in March, and growing to 10 from October, as part of our W18/19 schedule. Flights to Aqaba will commence in October with four routes, which will help deliver almost 500,000 customers per annum at Amman and Aqaba airports.” Start dates for the 13 routes launching in W18/19 have not yet been confirmed by the airline, while the Paphos to Amman link will begin 27 March.

From W18/19, the first Jordanian link between Paphos and Amman will reduce from four to twice-weekly, with the following routes also being launched to the capital: Milan Bergamo (three times weekly); Bucharest; Budapest; Bologna; Brussels; Krakow; Prague; Vilnius; and Warsaw Modlin (all twice-weekly). Aqaba will be linked to Athens, Cologne Bonn, Rome Ciampino and Sofia (all twice-weekly). The result means that next winter Ryanair will operate 29 weekly flights to Jordan. If we were to compare this total to this winter, Jordan would be just above Cyprus (23 weekly departures in W17/18) and equal to Luxembourg (29) in country market rankings for the Irish ULCC. Of Ryanair’s planned routes, the only one which looks set to face direct competition is that between Bucharest and Amman, a sector currently served by TAROM.

Last year 2.26 million seats were flown between Jordan and Europe, a 6.4% increase over 2016. It marks the third consecutive year of growth in the market, following three years of cuts between 2012 and 2014. The result of 2017 also marks the best year recorded this decade, with 2011 seeing 2.22 million seats, 1.7% fewer than last year’s offering. 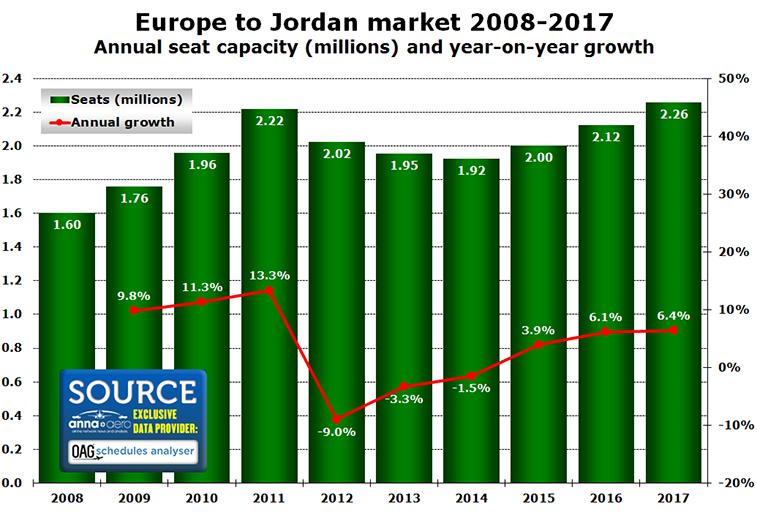 Although it has never flown to Jordan before, by the time that its full schedule to the nation has launched, it is anticipated that Ryanair will become the country’s third largest airline, just behind Emirates and national carrier Royal Jordanian. Its forecast of just over 285,000 seats for the W18/19 season would place it some 25,000 seats behind Emirates, if the MEB3 member does not alter its three time daily schedule between Dubai and Amman for next winter. Given that Ryanair’s seat capacity forecast for W18/19 is currently 80% larger than Saudi Arabian Airlines’, the Irish airline is easily going to overtake the flag carrier of Saudi Arabia to become Jordan’s third largest operator, unless the latter plans serious expansion. 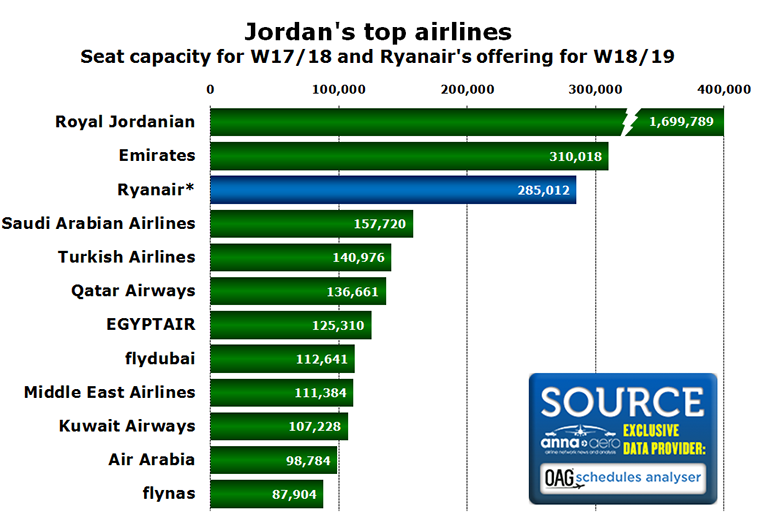 Given that Jordan’s second largest airline is poised to operate only 25,000 more seats than Ryanair next winter, could the Irish ULCC be tempted to add more routes to Amman in order to take second place? If it was keen to add one or two more routes to the Jordanian capital, or indeed Aqaba, it would need to offer at least five extra weekly flights next winter to Jordan in order to take second spot. Given that Ryanair has grown its Israel operation by close to 400% between 2016 and 2017, the carrier appears eager to expand its operations in the Middle East, so it is likely that the airline will become Jordan’s second largest airline in the not too distant future if Israel operations are mirrored in Jordan.

Last year 1.50 million low-cost seats were flown to/from Jordan, an increase of over 10% when compared to 2016. Of this LCC capacity, only 12% was on routes between Jordan and Europe, with those being Pegasus Airlines’ links from Ankara and Antalya to Amman, plus Air Arabia Jordan’s route to Tbilisi. However, it should be noted that the latter route has now ended, due to the carrier’s dispute with Jordanian authorities to secure more traffic rights to fly out of Amman, with the airline converting its operations from the airport to charter services, a situation which is surely in favour of Ryanair’s move. 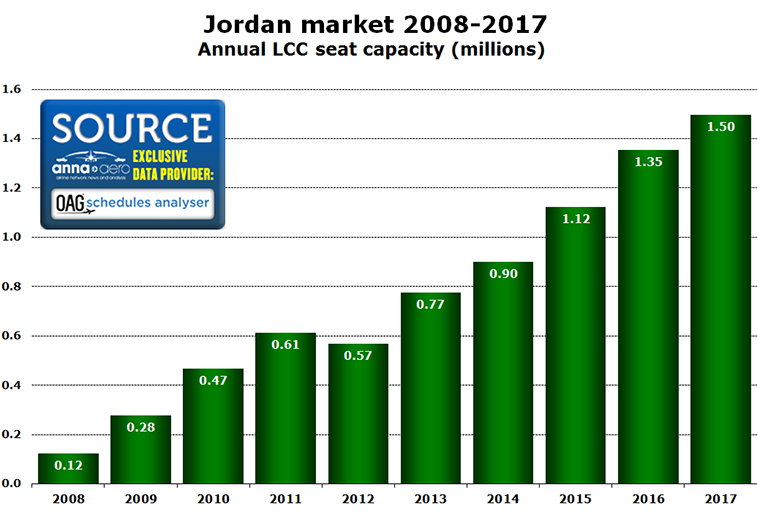 The last Western European LCC to operate to Jordan was easyJet, which operated a twice-weekly service between London Gatwick and Amman before closing the route in May 2014 after three years of operation. Despite loosing easyJet, Jordan’s LCC capacity has grown 66%, with Ryanair’s arrival expected to help push LCC seats from Jordan just over two million in 2018, doubling in size since easyJet’s departure. 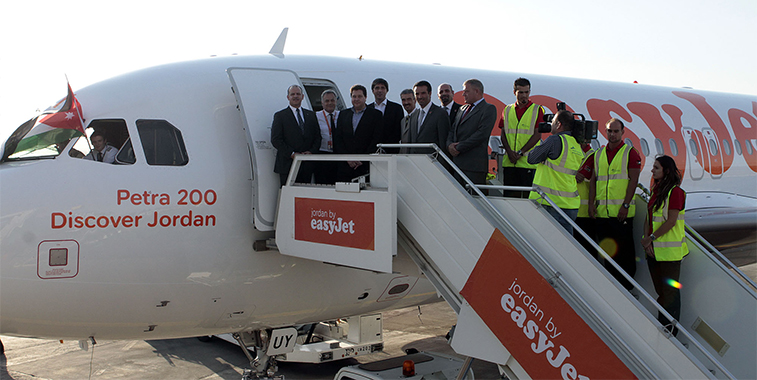 easyJet commenced flights to Amman in Jordan in 2011, however three years after the inaugural service from London Gatwick the carrier decided to end operations to the Middle Eastern country. Ryanair is planning a much more advanced entry into Jordan with 14 routes, and is set to become the nation’s third largest airline in W18/19.