Düsseldorf-Johannesburg is “Skyscanner Unserved Route of the Week” with 115,000 searches; Eurowings to enter this route? 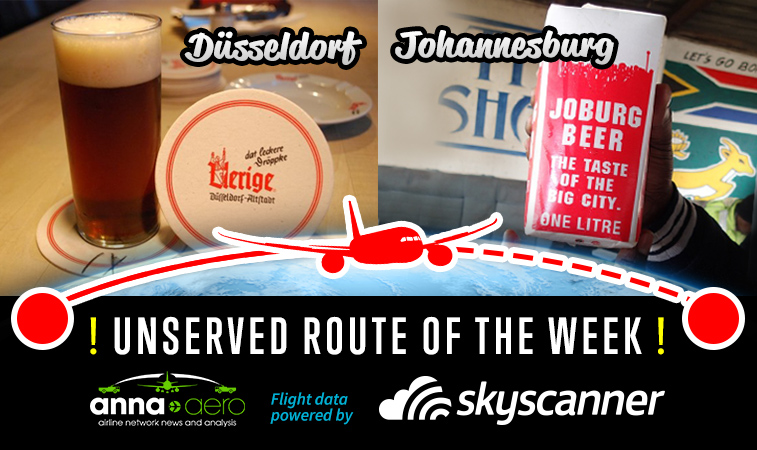 Fancy getting a taste of the big cities? More than good beer links Düsseldorf and Johannesburg – last year around 115,000 searches were made by travellers eager to fly direct between this part of Germany and that part of South Africa. Unsurprisingly over 90% of the market is driven from the Düsseldorf end of the potential city pair.

With nearly 115,000 searches in the past 12 months, a potential city pair from Düsseldorf to Johannesburg has been identified as this week’s “Skyscanner-anna.aero Unserved Route of Week” – a powerful analysis based on aspirational data captured from the Skyscanner.net flight comparison site used by +60 million unique visitors per month. “South Africa is currently one of the largest unserved countries out of Düsseldorf with a market volume of more than 30,000 one-way passengers, of which 16,000 are to Johannesburg,” confides Ulrich Topp, Director Aviation Marketing, Düsseldorf Airport. “Having 18 million people in our catchment – one of the largest in Europe – means that there are also good conditions for market stimulation to South Africa in general, and Johannesburg in particular.” 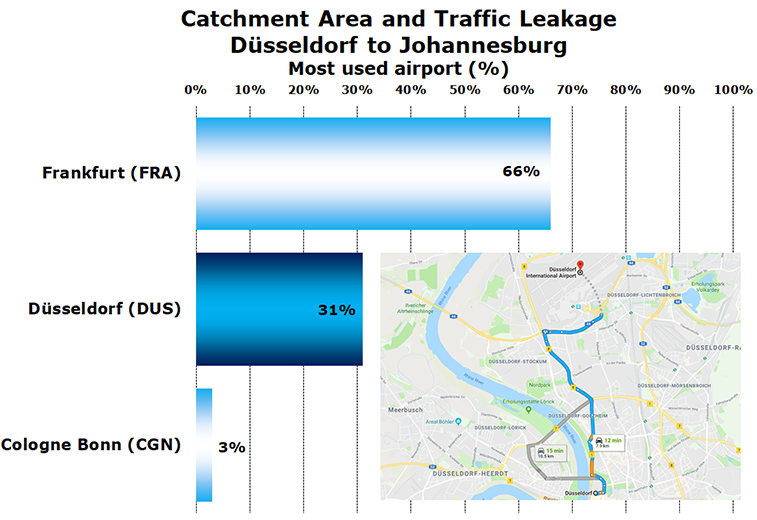 Matt Williamson Skyscanner’s Commercial Executive says: “Düsseldorf serves 31% of the catchment (100 km around the airport) going to Johannesburg. With a better service, such as a non-stop operation, the traffic could grow by 173%.”

anna.aero encourages Eurowings or SAA to enter this route

Skyscanner demand on this week’s unserved route shows a significant preference towards the Düsseldorf end of the city pair, with a 92/8 split, so on this basis we looked at potential carriers at the German origin first. According to OAG schedules for the week commencing 2 February, the largest carrier at Düsseldorf is Eurowings (39% share of weekly seats). The airline’s four destination long-haul route network from the German airport presently consists of four Caribbean destinations – namely Varadero and Punta Cana (both twice-weekly), Puerto Plata and Cancún (both weekly). While the Lufthansa subsidiary currently has a limited long-haul network, this will be improved in the summer as it looks to commence six times weekly flights to New York JFK (28 April), Southwest Florida (3 May) and Miami (4 May), as it continues to sweep up opportunities left in the local market following airberlin’s demise. As Eurowings is clearly in expansion mode at Düsseldorf, particularly given its recent announcement over the reallocation of its long-haul capacity for W18/19, it would not be hard to persuade the carrier to consider a new route to Johannesburg, especially now given this compelling Skyscanner data.

Behind Eurowings at Düsseldorf is its parent Lufthansa (11% share of seats). While the Star Alliance carrier is presently flying to New York Newark and Miami from the airport, and is increasingly offering long-haul routes outside of its main two hubs in Frankfurt and Munich (it launched a JFK service from Berlin Tegel last November), it is perhaps unlikely that it would consider venturing into the South African market from Düsseldorf. Indeed, the carrier is leaving the Miami route to its daughter company this summer. In addition, as Lufthansa has multiple-daily flights between Frankfurt and Düsseldorf, with many passengers connecting onto its daily service to Johannesburg, it may also be reluctant to harm this existing traffic flow. On this basis Düsseldorf’s biggest carrier is the most likely to consider a new route to the South African city from the German end of the potential route.

“The federal state of North Rhine Westphalia, with its capital Düsseldorf, is one of the strongest trade partners with South Africa, making Johannesburg not only attractive as tourist destination, but also as a business destination. This is reflected in the highest average ticket yield [MIDT by Sabre MI, Oct 16-Sep 17] on Düsseldorf-Johannesburg compared to all other German airports,” adds Topp.

Contemplating the South African end of the route, Johannesburg’s leading capacity provider of its current 39 serving airlines is unsurprisingly South African Airways (SAA), which offers 34% of the airport’s weekly seats. The carrier currently operates to eight destinations in Europe, including Germany’s two biggest airports – Frankfurt (double-daily) and Munich (daily). As the country’s third largest airport with 24.6 million passengers in 2017 (+4.8% vs 2016), if any German airport is on SAA’s long-haul new route to-do list it must be Düsseldorf. 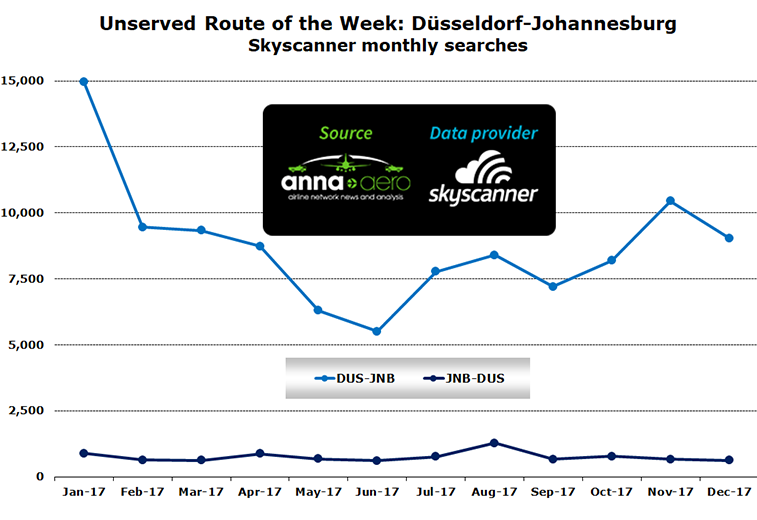 When looking at the previous year of search data (graph above), the busiest month (from Düsseldorf) is January 2017, with nearly 15,000 searches, while the quietest month was June 2017 (5,500 searches). Given the anticipated booking profile of the route – long-haul leisure – around 50% of travellers on this potential sector will want to book between seven to five months before departure, so this would seem to indicate that the busiest months for traffic will be between June and August, with the seasonal low being between November and January. This search trend seemingly goes against the accepted wisdom that for Europeans, South Africa is primarily a winter market. Using the same methodology for the Johannesburg end of the sector, the peak month for traffic will be between February and April, with the low being again between November and January.

According to OAG Traffic Analyser, because there is no direct service, the top three connecting options chosen by those passengers who did book travel between Düsseldorf and Johannesburg in the last 12 months (year ending November 2017) indicates that the majority of connecting travellers used London Heathrow (23%), Zurich (15%) and Dubai (13%). Looking at the traffic flows in the opposite direction, Frankfurt climbs from fourth most used transfer hub to top (20%), with Heathrow pegged back to second (19%) and Dubai still in third spot (18%).

Indeed, an O&D market that is not served by a non-stop flight will typically display a low purchase rate and low traffic. In this instance Skyscanner’s Travel Insight indicates a monthly average of 5.8% for the Düsseldorf to Johannesburg route (see graph below). Therefore, if there was a Düsseldorf to Johannesburg route, and if bookings performed in line with the “Skyscanner market average” for direct services at both airports (7.6%), the airline operating this route could immediately expect an improved purchase rate of 31%, without any increased marketing spend. However, with 115,000 annual searches in the past 12 months, and with the sector being operated by an appropriately-sized aircraft for the type of route, a two or three times weekly service should be immediately viable for the airline choosing to start this potential city pair. “A service to Johannesburg would not only be a point-to-point route, as we can offer a strong feeder network in Düsseldorf with a large variety of airlines, including a dense Eurowings and Star Alliance route portfolio, therefore I am confident it will be a successful city pair,” concludes Topp. 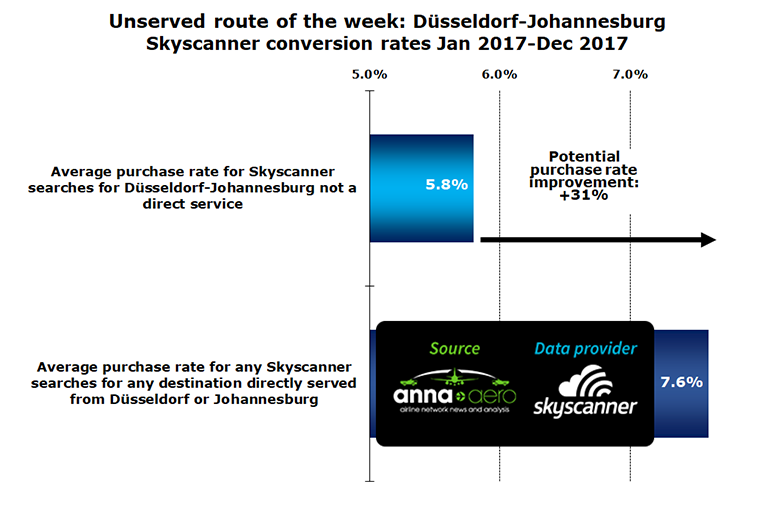