Exeter Airport bounces back above 900,000 annual passengers with traffic climbing 7.2% in 2017, the fifth consecutive year of growth 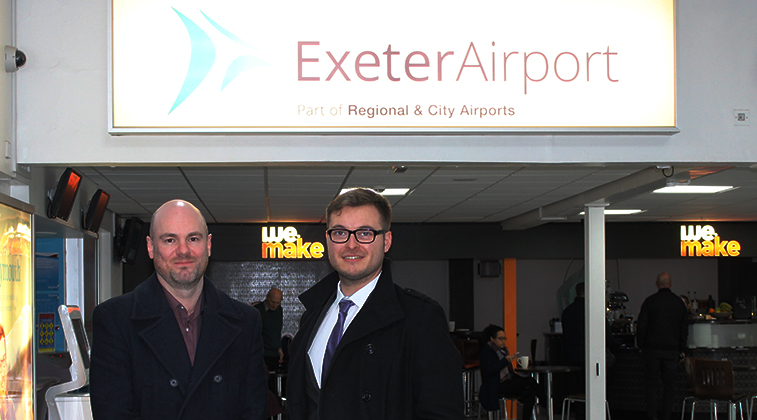 Rob Johnson, Aviation Development Manager, Regional & City Airports, met with Jonathan Ford, Assistant Editor of anna.aero, at Exeter Airport on 6 February. ““We have been reporting a steady and sustainable increase in passenger numbers at Exeter for a number of years and the conditions are now right to build on this and deliver a step change in growth. What we would like to see is an enhanced range of interline opportunities on some routes. We can also justify demand for additional European services, for instance the inbound German tourist market to Devon is roughly 500,000 people per year,” adds Johnson.

Exeter Airport serves a city of around 130,000 inhabitants, but with its wide catchment including the county of Devon (1.18 million inhabitants), this stretches to around three million people. Last year saw the airport bounce back above 900,000 passengers, a 7.2% increase over 2016. To find out more about the airport and its recent developments, plus its aspirations for the future, anna.aero’s Jonathan Ford travelled to the Devon facility to meet with Rob Johnson, Aviation Development Manager, Regional & City Airports. “Exeter serves an economically-strong catchment, and it has advanced in recent years thanks in part to more businesses relocating to this region.”

After a shaky few years after the global recession, passenger traffic is once again in a position of stable growth at Exeter, with the airport posting a 7.2% increase in throughput last year. The result means that for five years on the bounce Exeter has reported positive traffic trends. ““We have been reporting a steady and sustainable increase in passenger numbers at Exeter for a number of years and the conditions are now right to build on this and deliver a step change in growth,” comments Johnson. “One market we are focusing on is trying to capture the catchment over-spill to London airports which still remains high. We would also like to see an enhanced range of interline opportunities on some routes, including Paris CDG, to further boost passenger numbers, as people in our catchment are still unaware for instance that you can fly to South America via one-stop in Paris.” 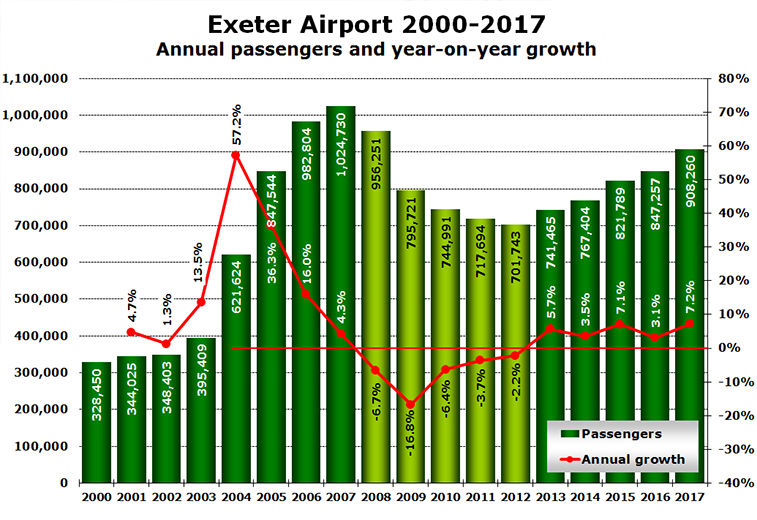 With the airport producing an average year-on-year increase in traffic of 5.3% between 2013 and 2017, it should be targeting roughly 950,000 passengers this year, which would match its achievement of 2008. Since the turn of the millennium, Exeter has only encountered five years of traffic cuts (highlighted in light green), with these all occurring in the five-year period between 2008 and 2012, following the last major recession. Currently the airport is served by Flybe and TUI Airways, with both having aircraft stationed at Exeter throughout the year. “Flybe has three Q400s and one E195 based here while TUI Airways has a year-round based 737-800,” informs Johnson. “Isles of Scilly Skybus also operates into the airport in the summer from St. Mary’s, while some carriers operate several charter flights throughout the year.”

With over 130,000 passengers in 2017, Manchester is the leading route from Exeter, followed by Palma de Mallorca and Edinburgh. Of the leading routes, five (highlighted in light green) are international, with the other five being domestic. The top 10 routes accounted for 58% of passengers from Exeter in 2017. “In terms of routes we are well covered on the domestic side, the Mediterranean and on some city routes to Dublin, Paris CDG and Amsterdam,” comments Johnson. “One area where we are lacking services is Central Europe. For instance Devon sees around 500,000 inbound German tourists a year, and there is an outbound market to this region as well.” Johnson also commented to anna.aero saying that the inbound market has developed well over the past few years thanks to the connections made available via Flybe’s Manchester link. “Passenger growth has been pretty strong on this route thanks to the connections available.” 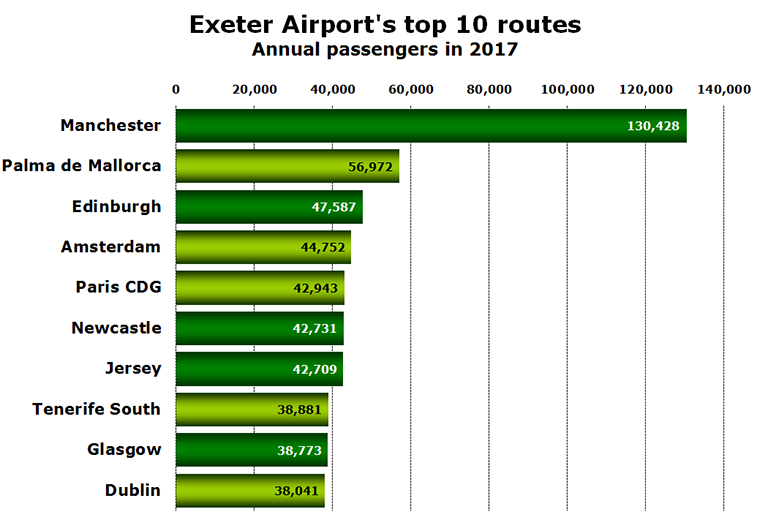 Outside of the top 10, other routes from Exeter which saw over 30,000 passengers last year include Lanzarote, Alicante, Malaga, London City, Belfast City and Guernsey, while services to Norwich and Faro fell just below this level of demand. The longest sector currently flown from Exeter is Larnaca, a distance of 3,444 kilometres according to OAG schedules. Along with those mentioned above, other routes served from Exeter include: Gran Canaria, Menorca, St. Mary’s, Paphos, Corfu, Ibiza, Rhodes, Dalaman, Geneva, Chambery, Bergerac and Rennes. 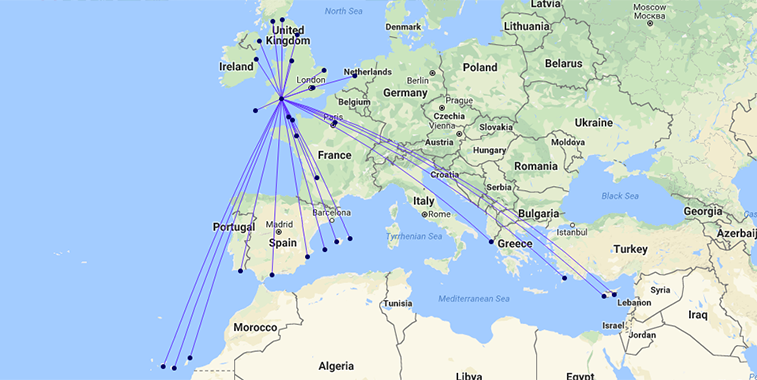 Exeter Airport’s route map in S18 mainly consists of southern European services to destinations on the Mediterranean along with a host of UK and French regional services, plus Amsterdam and Dublin. This summer TUI Airways will have one based 737-800 offering two daily (three on Saturdays) rotations according to OAG schedules. Flybe will have between three and four Q400s and one E195 positioned at its home base, offering up to 17 daily departures.