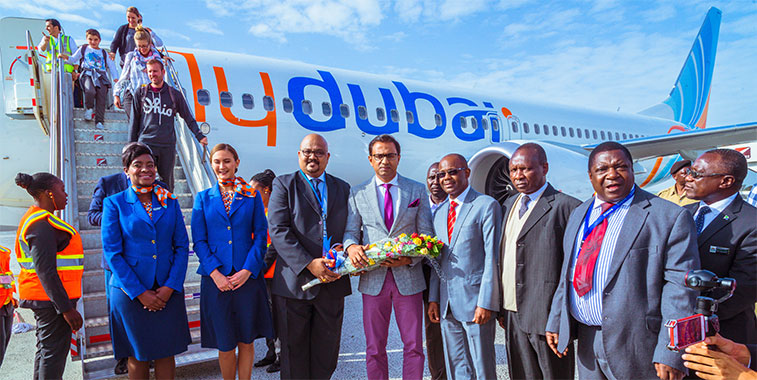 anna.aero’s New Routes Database shows that flydubai launched 10 new routes in 2017, including this one to Kilimanjaro in Tanzania, which began last December, becoming the airline’s 12th destination in Africa. The Dubai-based LCC enjoyed consistent growth from 2009 up until 2016, but there was a marginal reduction in the seats available across the carrier’s network last year.

flydubai is the third largest operator in the UAE based on departing seats in 2017, behind only Emirates and Etihad. It is also the largest LCC operating to or from the UAE. In October 2017 it was announced that the carrier had agreed a codeshare agreement with sister company Emirates, with their partner network permitting the transfer of baggage to the final destination on qualifying, connecting services. ch-aviation shows that flydubai currently has an active fleet of 59 aircraft, including 55 737-800s and four 737 MAX 8s. In July it became the first Middle East-based airline to operate the 737 MAX 8.

Seven years of growth, but capacity checked in 2017

flydubai began operations during 2009, but 2010 was its first full year of flying. From 2009 to 2016 the carrier saw a continuous, upward trend in available capacity, with seven consecutive years of growth. Seat numbers rose from 2.86 million in 2010 to 15.34 million in 2016, representing a huge 437% increase in capacity over this period. In 2017, the LCC reduced the capacity available across its network for the first time, cutting seat numbers to 15.04 million, although this was only a marginal drop of 2.0% when compared to the previous year. 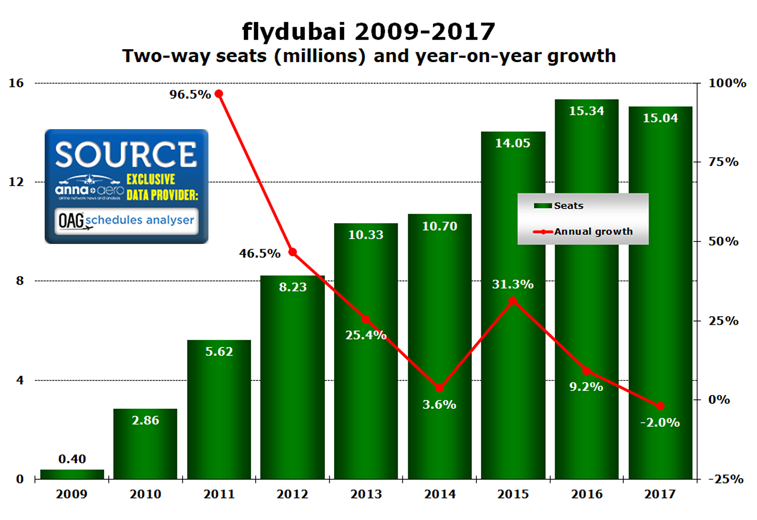 All of flydubai’s services are international, with no seats available on domestic links within the UAE. OAG schedules show that the carrier operates domestic sectors in Tanzania, Sri Lanka and Sudan, but it does not appear that seats are on sale on these internal flights. The services all start or end in Dubai, indicating that they are part of triangular services and that the carrier doesn’t have the required route rights to carry passengers internally in these domestic markets. The small number of seats represented by these domestic sectors in international markets have therefore been discounted in this analysis.

Dubai Airport is flydubai’s main operating base and accounted for half of all departing seats in the airline’s network in 2017. The carrier also served seven destinations from Dubai Al Maktoum, making it the 12fth largest airport in the network last year. Nine of flydubai’s top 12 airports were in the Middle East, with the remaining three (Karachi, Kathmandu and Kabul) located in nearby South Asian countries. Five of the top-ranked airports experienced capacity growth from the LCC in 2017, with Bahrain and Karachi leading the way with respective 18% and 7.6% increases in departing seats. Seven of the top 12 airports (highlighted in red) saw seat numbers cut from 2016 to 2017. The largest reductions in capacity came at Doha and Al Maktoum which saw respective declines of 64% and 56% compared to 2016. Doha’s decline was probably a result of the diplomatic tensions between the UAE and Qatar, while Al Maktoum seems to be on a downward trajectory in flydubai’s network plans, with the airline dropping five destinations from the airport in 2017. 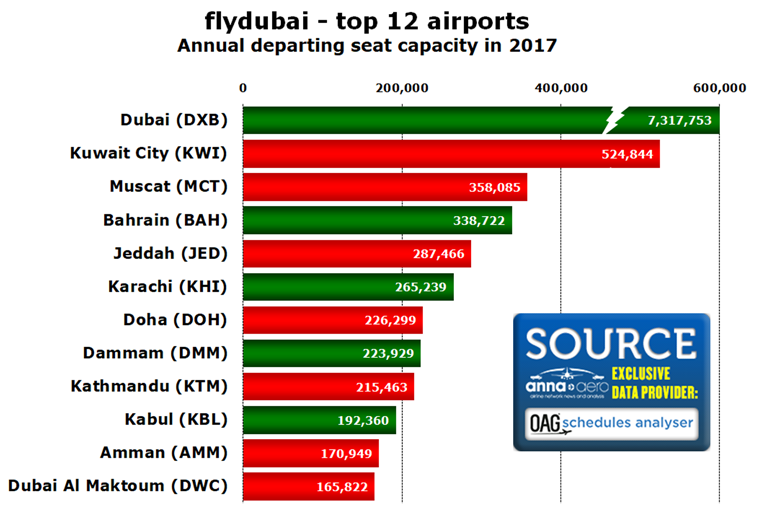 The largest airport pair in flydubai’s network in 2017 was the link between Dubai and Kuwait City, which supported more than 500,000 one-way seats. One of the fastest growing routes was connection from Dubai to Baku in Azerbaijan which saw seat numbers nearly double from about 83,000 in 2016 to more than 150,000 in 2017.

Saudi Arabia is flydubai’s largest destination market, accounting for 19% of its one-way seats from the UAE in 2017. Seven of flydubai’s top 12 country markets are in the Middle East, which is unsurprising given the location of its home market, fleet profile and business strategy. A further four countries (Pakistan, India, Bangladesh and Nepal) are in South Asia, with Russia as the sole outlier. Russia, Bahrain and Pakistan enjoyed the largest increases in seat numbers amongst the top 12 country markets in 2017 with respective capacity growth of 28%, 18% and 16%. The airline launched several new routes to Russia in 2017, including a service from Dubai to Moscow Sheremetyevo, which commenced in November. Five of the top-ranked country markets (highlighted in red) experienced a capacity contraction from 2016 to 2017, with Qatar seeing the largest cuts for reasons already explained, followed by Kuwait, which saw available seat numbers drop by more than one quarter. 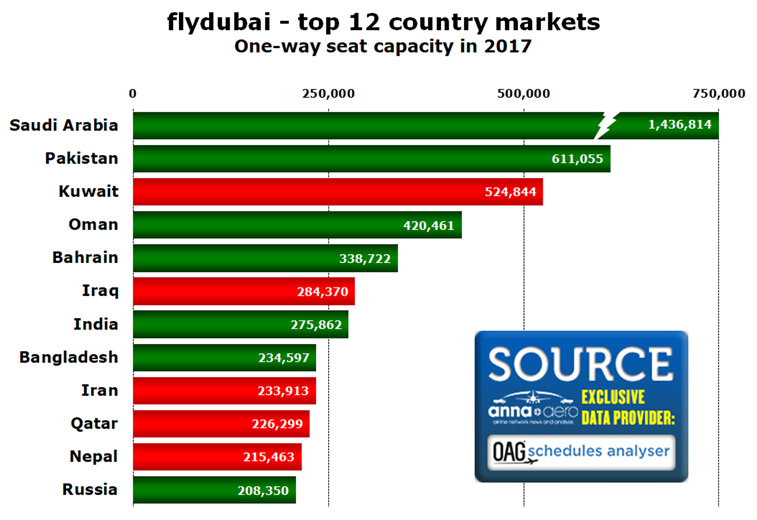 A relatively new addition to flydubai’s network is Thailand, with the airline beginning services from Dubai to Bangkok Suvarnabhumi in 2016, before ramping up to offer 124,000 one-way seats on the sector last year. Other new country markets added in the past three years include Eritrea and Somalia in Africa, plus Montenegro, with services commencing from Dubai to Tivat last June.

According to anna.aero’s New Routes Database flydubai launched 10 new services in 2017, including four to Russia. A further six new routes have already been announced for 2018, including links to Krakow, Dubrovnik, Catania and Thessaloniki. 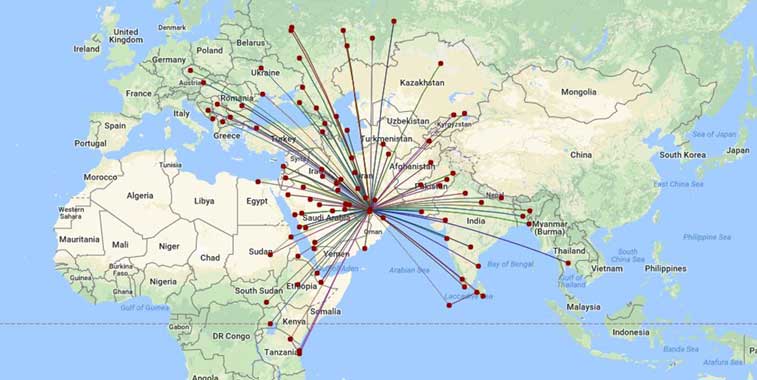 flydubai only operates international services. Its route map for the week commencing 6 February shows a concentration of destinations in the Middle East and South Asia, along with some further afield to European and African countries. One of the most recent country markets to be introduced to the airline’s network is Thailand, with flights from Dubai to Bangkok Suvarnabhumi beginning in 2016.