Frontier Airlines bolsters Austin network with announcement of 14 more domestic routes, with schedules indicating it will base two A320s 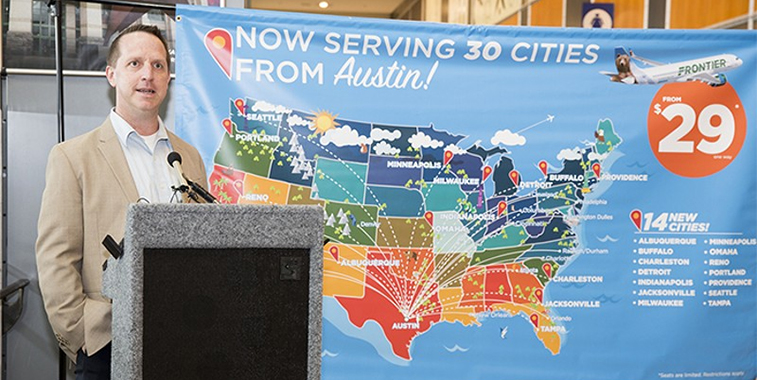 Josh Flyr, Frontier Airlines’ VP of Network Planning and Revenue, was on hand in Austin on 8 February to announce the airline’s latest batch of routes from the Texan city, with it adding a further 14 domestic points from April. It means that for 2018 the airline will operate non-stop service to 30 cities in the US from Austin.

The 8 February was a big day for Frontier Airlines at Austin, with it announcing that from April it will add 14 additional US domestic services from the Texan airport, adding to the five already confirmed new routes for this year, namely Cincinnati, Charlotte, Cleveland, Columbus and San Jose. “The greater Austin and Central Texas communities continue to respond well to our ‘Low Fares Done Right’ philosophy,” commented Josh Flyr, Frontier’s VP of Network Planning and Revenue, on the confirmation of the newest routes. The latest round of destinations can be seen in the table below, along with the competition which will be encountered on seven of the city pairs, with the other seven currently unserved from Austin. In total the extra services will result in 37 additional weekly departures from Austin in S18, equaling 13,200 extra seats per week. The news of the extra flights, including the five routes confirmed before the announcement this week, means that Frontier will operate 97 weekly flights from the Texan airport this summer, up from a peak of 39 weekly flights in S17 based on OAG data.

Not surprisingly, the two routes which will see Frontier face the most direct competition are those where it has pushed the most capacity, with Minneapolis-St. Paul and Seattle-Tacoma both seeing a four times weekly rotation. The former is already served by Delta Air Lines which will offer 18 weekly flights at the time of Frontier’s launch, with Seattle-Tacoma currently flown by Alaska Airlines (12 times weekly) and Delta (daily). The 14 extra routes being added in April from Austin, on top of the five new services for S18 confirmed last year, means that the ULCC will serve 30 destinations from the city on either a seasonal or year-round basis in 2018.

It appears,  based on OAG schedules, that on top of the positive news of the services, there will also be two extra based units at Austin, with these poised to be A320s, adding to the current night-stopping aircraft at the airport. The table below shows the rotation pattern of the two aircraft which will be stationed in Austin from April. Of the routes announced this week, the only service which appears not to be operated on a based aircraft is Omaha, which fits into the airline’s schedule on a w-pattern rotation from another base. This is also confirmed by the fact it is flown on an A319 instead of an A320.

Given the sector length and timings of theses flights, both routes to the North West US, Portland and Seattle-Tacoma, will see a red-eye rotation from the latter airports, with both getting a 19:55 departure from Austin, returning back to Texas by 05:40 the following morning. Schedules also suggest that Thursday evenings see another aircraft night-stop in Austin, with Indianapolis’ morning rotation taking place at 05:30 on Fridays. Nonetheless, the 05:30 departure to the latter city on Mondays is still able to be operated by aircraft two, suggesting that the Thursday evening aircraft will be the one allowing for an aircraft swap.

A roller coaster of a relationship

Austin is certainly on a high right now, having handled just under 13.89 million passengers in 2017, up by close to 12% versus the 12.44 million it handled the year before.  Given its presence at Austin in recent years, Frontier will have been part of this traffic uplift, with the ULCC itself increasing its seat offering from Austin by over 56% between 2016 and 2017, operating over half a million seats last year. It appears that the ULCC and Texan airport have had a roller coaster of a relationship during the last decade, seeing annual capacity with the airline more than double between 2013 and 2014, but double-digit capacity cuts were recorded in 2012 and 2013 when referencing OAG schedules. 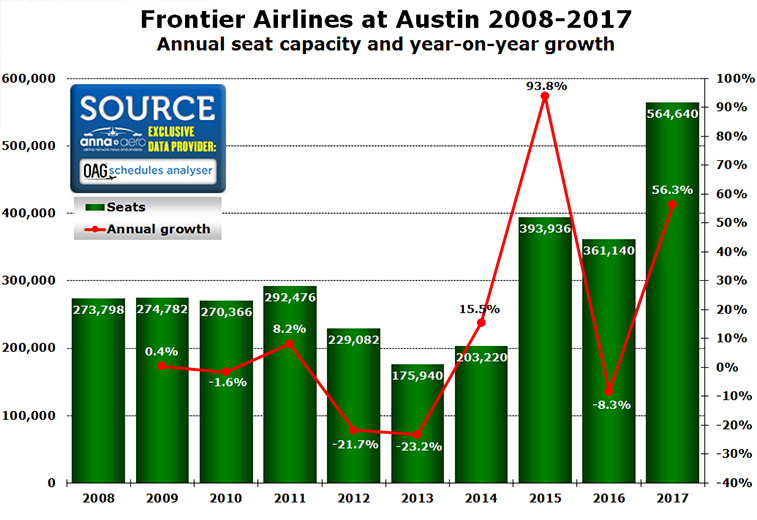 When referring to the Bureau of Transportation Statistics (BTS), Frontier transported 312,432 passengers from Austin in 2016. This result gave the carrier a theoretical load factor of 87% from the city that year. For 2017 data which is available (January-October), Frontier transported 388,120 people to/from Austin, up 46% when compared to the same 10-month period of the year before, and 24% greater than the amount of passengers it flew from Austin in all of 2016. With the number of routes and weekly flights expanding rapidly this year, and capacity itself forecast to grow by roughly 500,000 seats in S18 based on calculations by anna.aero, Frontier could expect to fly well over 800,000 passengers from Austin this year. 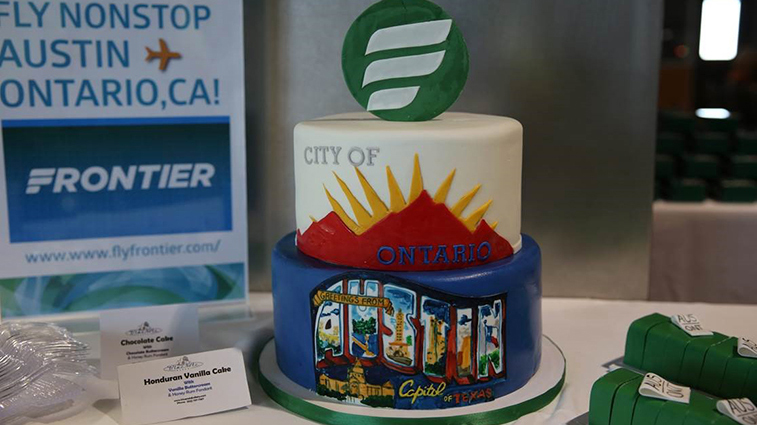 Frontier Airlines inaugurated flights between Austin and Ontario on 12 October, with the former toasting the service with this fantastic cake. Ontario was one of six destinations to be added to the airline’s Austin network in 2017, with others including New Orleans, Phoenix, Raleigh-Durham, San Diego and Washington Dulles. For S18 the ULCC will add a further 19 routes from Austin, meaning it will link the Texan city to 30 destinations non-stop this year.