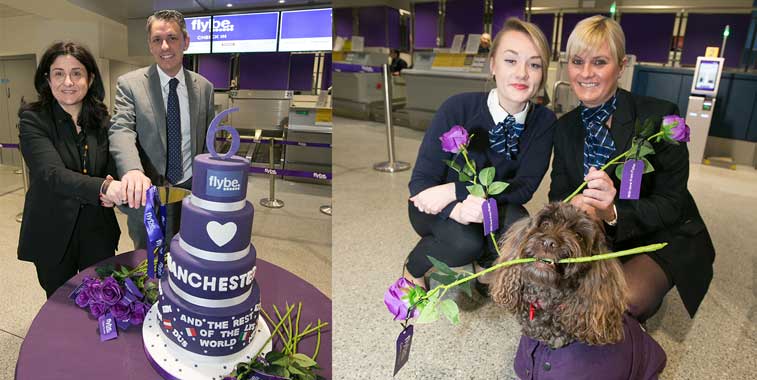 Flybe celebrated the sixth anniversary of its hub at Manchester airport on 14 February. To mark the anniversary on Valentine’s Day’s Flybe CEO Christine Ourmières-Widener and senior management colleagues were joined by Stephen Turner, Manchester Airport’s Commercial Director at a special event that included a cake cutting ceremony together with a suitably romantic ‘fun’ element featuring Lola the labradoodle dog who spread some additional love by offering travellers purple roses as they arrived at the airport. The airline’s hub has proven popular with UK regions. “In business it pays to make the right connection. The vast array of onward connections offered from Manchester with many of the leading global airlines, means our business and leisure travellers have stress free journeys to the destination of their choice every time,” said Simon Goddard, CEO Isle of Man, Online Regional Travel Group. “With Flybe’s choice of up to five flights daily from the Isle of Man, Manchester is the most convenient UK hub for islanders and is of significant importance to our clients.”Glasgow-based Richard Nicol, Supplier Relations Manager with Clyde Travel Management is also a fan of Flybe’s Manchester hub. “Manchester Airport is now a well-established international gateway with numerous direct services to worldwide destinations. Over the past six years, Flybe has played a major role in this achievement by investing in strategic links throughout the UK offering consumers an attractive option to Manchester and beyond with seamless connections via their long-haul partners. Flybe’s significant investment since 2012 has better connected regional areas of the UK while offering travellers a short cut to the world.” USB3 carrier United Airlines now has a 757-200 based at “Knuffingen Airport” at Miniatur Wunderland Hamburg. Presenting the new attraction were: Dani Tanner, Marketing Manager Germany & Italy at United Airlines; Gerrit Braun, founder and MD of Miniatur Wunderland; Wolfgang Manner, Country Sales Manager Germany at United Airlines; and Anja Compton, Deputy Director of Aviation Marketing at Hamburg Airport. The US airline has a close relationship with Hamburg. Since 2005, United has operated a non-stop service from the city to New York Newark. The seasonal daily service will resume on 26 April, 2018. “We are delighted that a United 757-200 is now also entering operation at the miniature airport,” says Manner. “To date, we have welcomed well over a million passengers on more than 7,000 flights on our Hamburg-Newark route. Now even more people can enjoy a United flight — even if it is just as a visitor to Miniatur Wunderland.” 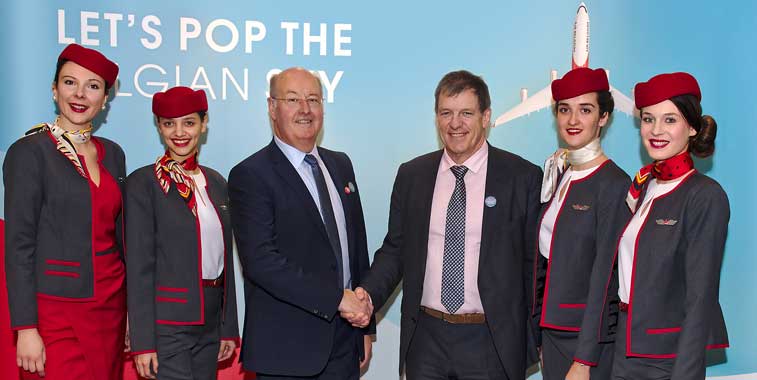 New Belgian carrier Air Belgium has selected Brussels Charleroi Airport as its home base. The new airline will operate long-haul services with A340s, with flights due to commence at the end of March and Hong Kong named as the first official destination. “We’re very pleased Air Belgium has chosen our airport,” says Jean-Jacques Cloquet, CEO at Brussels Charleroi. “Being able to welcome a company such as Air Belgium on our apron allows us to switch to a new strategy and further strengthen our international position. With the first direct long-distance flights to Asia, the Far East has never been closer. We look forward to welcoming future passengers and meeting their every need.” Air Belgium selected Brussels Charleroi due to its accessibility, efficient and renowned quality service, competitive costs and commitment to expand into a larger international airport. “Brussels Charleroi convinced us due to its very successful development and commitment to major investments and improvements of its infrastructures,” says Niky Terzakis, CEO of Air Belgium. “The airport is well established and attracts millions of travellers among which 60% are international passengers and 31% are business travellers. We are convinced that our passengers will benefit from a great service, especially because Brussels Charleroi is starting to adjust its current infrastructure.” 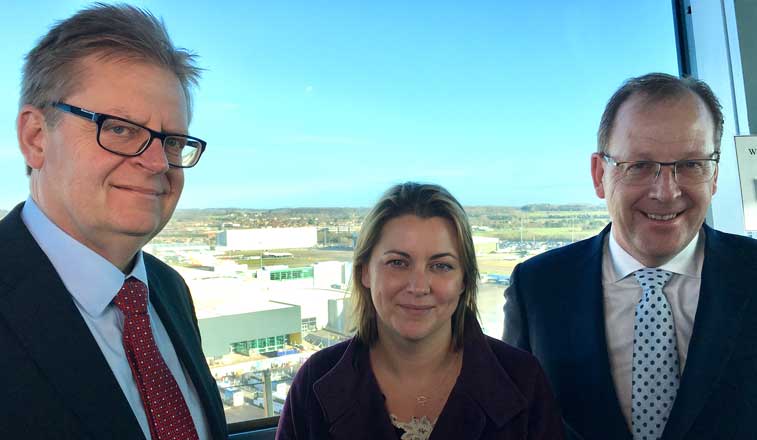 London Luton Airport welcomed 1.02 million passengers through its terminal in January this year, a 3.6% increase compared with the same period in 2017. The latest figures mark a new record for the airport, which has now welcomed over one million passengers every month for 12 consecutive months. Luton will celebrate its 80th anniversary this year and reach the next stage of its redevelopment. Clive Condie, Chairman London Luton Airport (left) and Nick Barton CEO, London Luton Airport (right) have already welcomed the Aviation Minister, Baroness Sugg (centre) to the facility this year. Baroness Sugg toured the airport and viewed the progress of its current £150 million redevelopment programme. The investment will create a bigger and better terminal, increasing the airport’s annual capacity to 18 million passengers by 2020. The newly-extended terminal building will open later this year with a variety of new shops and restaurants as well as more seating and additional boarding gates. 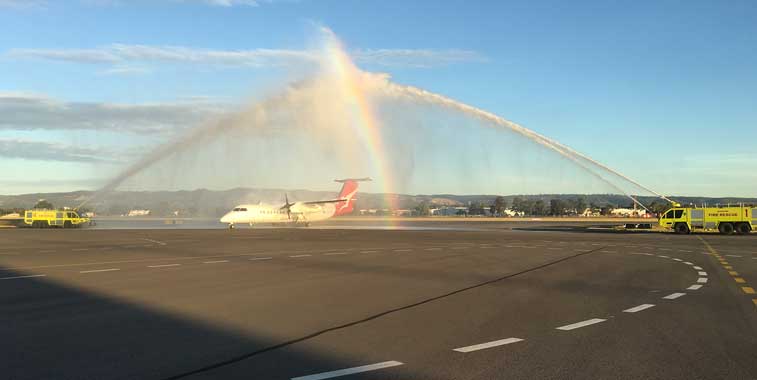 This water arch would have been a contender in anna.aero’s FTWA competition had it been entered to celebrate a new route. However, on this occasion this impressive salute was put on by Adelaide Airport for four-year-old Dwayne Franke who suffers from epilepsy. The flight was a special project put together by the Make a Wish Foundation who grant wishes for very ill children. It was Dwyane’s wish to go to the moon so Qantas provided the next best thing, chartering a flight for him. Upon his return he was a given this special salute.