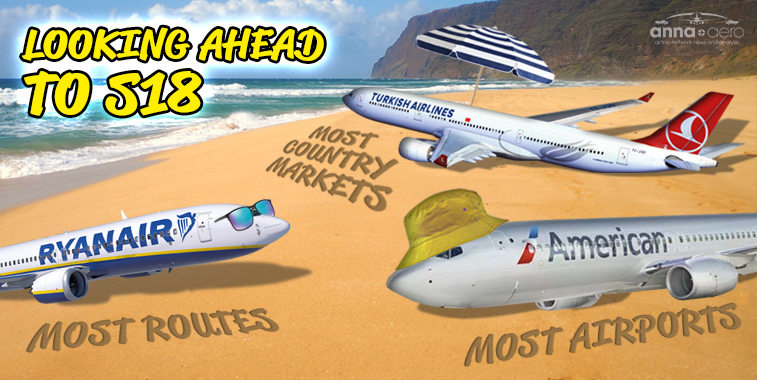 The 2018 summer season is fast approaching and with that in mind anna.aero took an early look at airline networks for a peak week in July. The results show that Ryanair will offer the most routes with more than 1,600 on offer, Turkish Airlines will serve the most countries, and American Airlines will operate from the most airports. All three carriers maintain the top spots in the same categories they lead during the equivalent period in 2017.

Due to kick-off on 25 March, S18 will run until 27 October. An analysis of the schedules reveals that for a peak week in July, Ryanair will operate the most airport pairs, Turkish Airlines will serve the most countries and American airlines will fly from the largest number of airports. All three carriers retain their first-placed finishes from a year ago when they topped the charts in the same categories. A full run down of the results can be found in the charts below.

The following analysis does not account for all flights scheduled for the entire summer season, but is based on a typical week in the peak period, in this case the week commencing 24 July 2018. Some airlines have not filed their entire summer schedules yet, but taking this peak week as an example should give a good snapshot of what is to come. The obvious caveat is that more routes may yet be added. The S18 data is compared to the week commencing 25 July 2017. The results are organised by published carrier, so some flights will be operated by partner operators or subsidiaries.

Ryanair retains number one spot atop of the routes rankings, offering nearly 600 more airport pairs than second-placed American Airlines during the week under analysis. The Irish ULCC has increased the number of airport pairs it will serve by 11% compared to the equivalent week from 2017. anna.aero’s New Routes Database indicates that Ryanair has already announced 88 new services that will launch during S18. The top five carriers in this table remain in the positions they occupied for S17. Seven of the 15 airlines offering the most airport pairs are European (highlighted in blue), with five based in North America (dark green) and three in China (red). Six of the top 15 carriers can be classified as LCCs or ULCCs, seven are full-service carriers (FSC) and the remaining two are leisure operators. 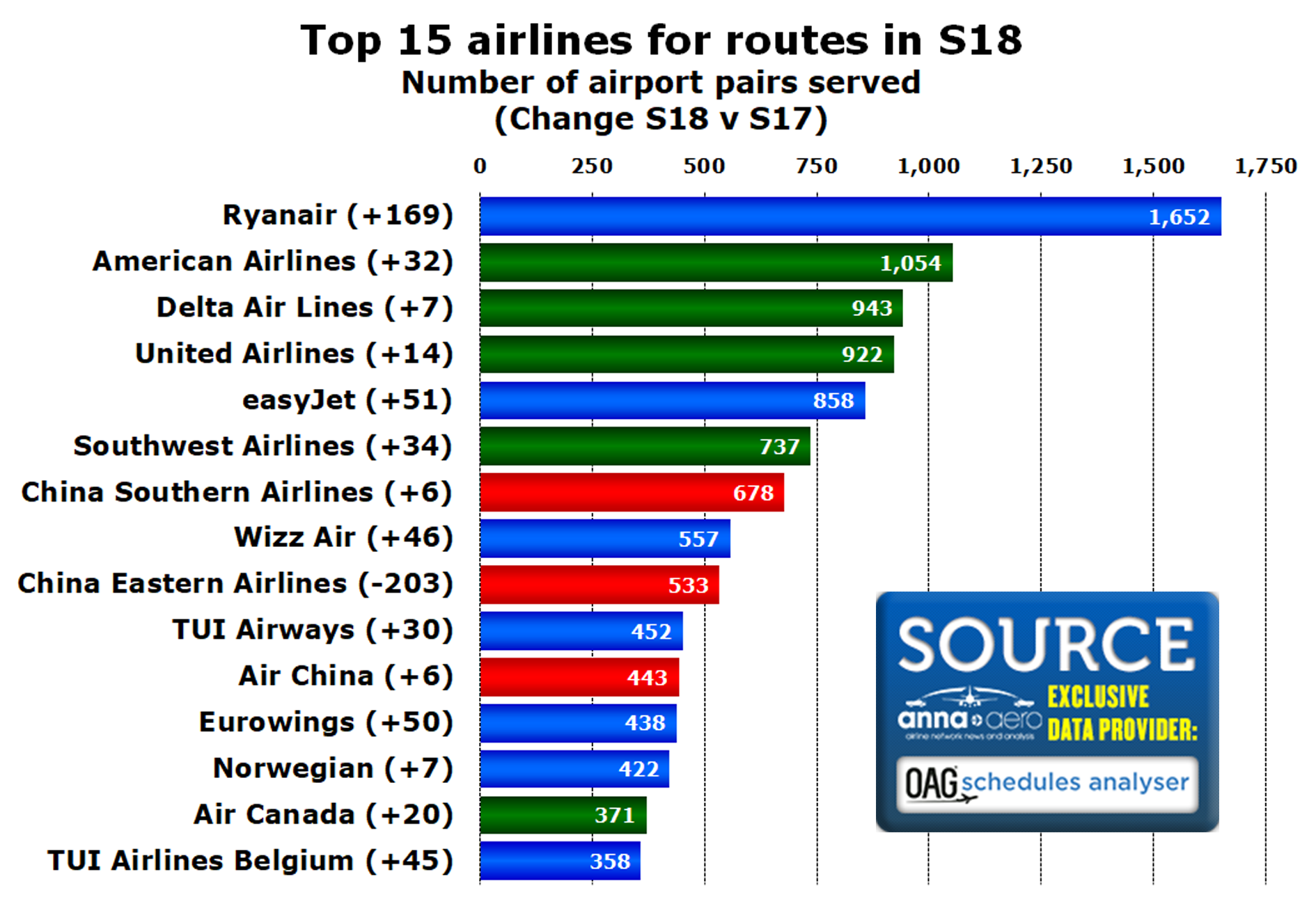 Most of the top 15 airlines have increased their route offerings compared to 2017. Ryanair has the most new routes scheduled, but the next largest increases also come from LCCs or ULCCs, namely: easyJet (51 extra routes), Eurowings (50) and Wizz Air (46). The only carrier to see a fall in route numbers between the equivalent weeks in S18 and S17 is China Eastern Airlines, which is currently scheduled to operate 203 fewer airports pairs. It is highly likely that some of this reduction is due to the Chinese carrier not having fully filed its S18 schedules for the particular week being analysed. A number of other significant airlines finished just outside the top 15 for routes, including Lufthansa and British Airways.

Turkish Airlines takes top spot in the country connection rankings for S18, with links to 28 more nations than Air France. The Turkish flag carrier will serve two additional country markets in S18 compared to last year with Comoros and Sierra Leone both added to the network. The top four remains unchanged from 2017. The airlines serving the most country markets include five European flag carriers (highlighted in blue), the MEB3 (Middle East big three – highlighted in orange) and the USB3 (US big three – highlighted in light green). There is also one carrier from each of Africa, Canada and Russia. 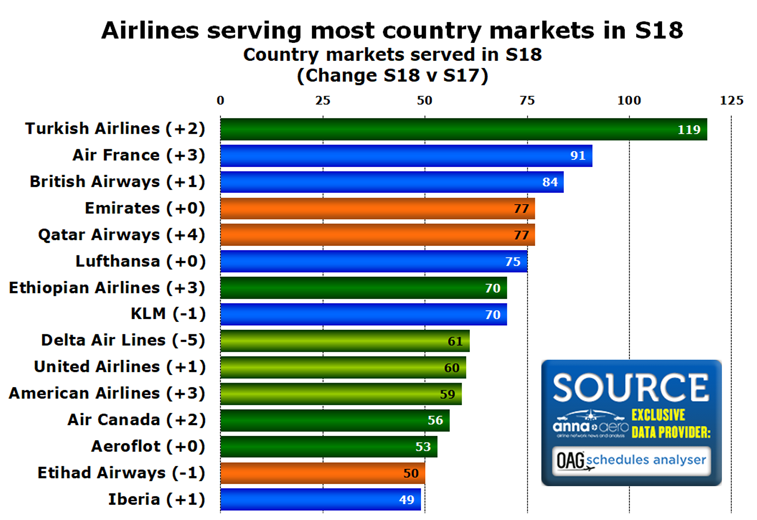 Five of the top airlines are Star Alliance members, with four from oneworld and four from SkyTeam. Nine of the top 15 airlines are scheduled to serve more country markets in S18 than in the equivalent week last year. Qatar Airways is due to experience the biggest increase with four more countries to be served. Only three of the top-ranked carriers have reduced their number of country markets versus last year. KLM and Etihad Airways both reduced the number of countries served by one, with Delta Air Lines seeing the biggest fall with a reduction of five countries.

Its another case of history repeating itself when we consider which airlines will serve the most airports in S18. The USB3 retain the top three spots in this table (highlighted in light green), with each carrier in exactly the same position as last year. A significant number of the airports served by the US majors will be domestic facilities, some of which are served by regional subsidiaries or affiliates under the USB3’s brands. Turkish Airlines holds on to fourth place, serving 51 more airports than its next nearest rival. Of the other top 15 carriers for airports served, five are European (highlighted in blue), three are Chinese (highlighted in red) and there is one each from Canada, Qatar and Russia. 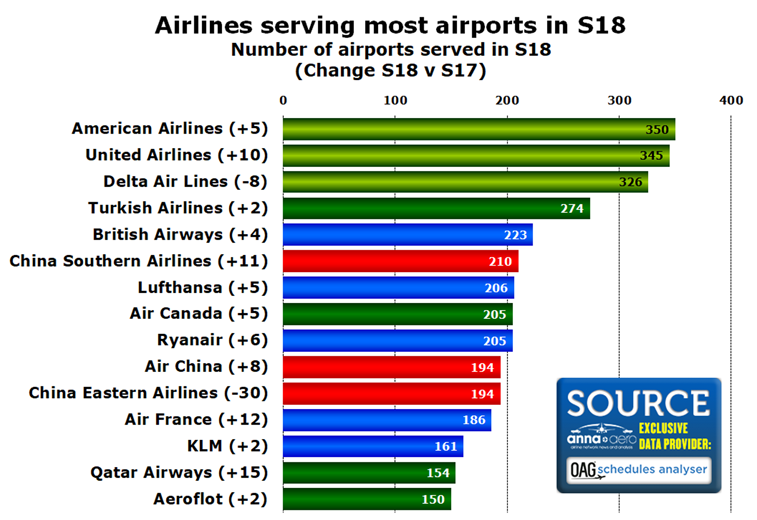 Ryanair is the only LCC to feature in the top 15 table for airports served. The remaining 14 operators can all be classed as FSCs. Most of the top-ranked airlines have increased the number of airports in their networks compared to the equivalent week last year. The largest increases have come from Qatar Airways (15 additional airports), Air France (12) and China Southern Airlines (11). Only two carriers have scheduled services to less airports with China Eastern currently due to serve 30 fewer facilities (again most likely for the reason stated above), and Delta, eight fewer airports.

Although the summer season is fast approaching not all carriers have finalised their schedules at this stage and further routes will be introduced. Stay tuned to anna.aero to learn the latest airline route announcements as and when they happen. 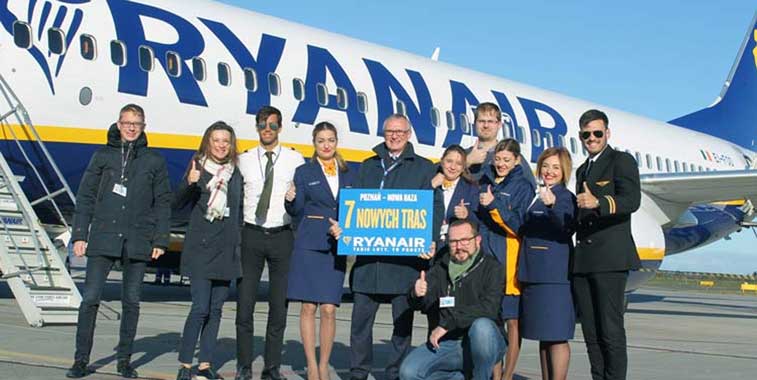 Poznan Airport celebrated the launch of Ryanair services to Madrid last October. The Irish ULCC continues to expand its route network and will operate more airport pairs than any other carrier during the week commencing 24 July. Ryanair will offer 600 more routes than second-placed American Airlines and has already announced 88 new routes that are scheduled to start this summer. It is also the only ULCC or LCC to feature in the top 15 airlines for airports served.