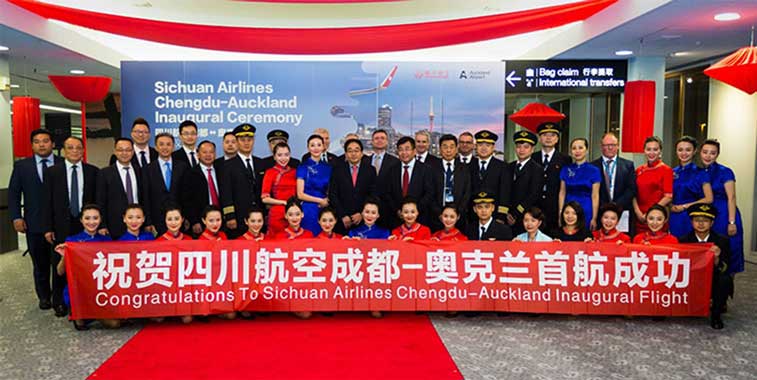 Sichuan Airlines provided more than 32 million seats across its network in 2017, an 8.1% increase compared to the previous year. The airline trebled its available seats from 2008 to 2017, with domestic services dominating operations. Despite this, international capacity has been growing fast and a new node was added to the network in June last year, when the airline began operating between Chengdu and Auckland.

Sichuan Airlines is the eighth largest airline in China based on departing seats in 2017. It is the eighth largest for domestic capacity and the ninth largest for international seats. According to ch-aviation, the airline’s fleet mostly consists of A320 family narrow-body types including 20 A319s, 58 A320s (including three neo aircraft) and 38 A321s. It also operates seven A330-200s and three larger A330-300s.

Consistent growth over past 10 years 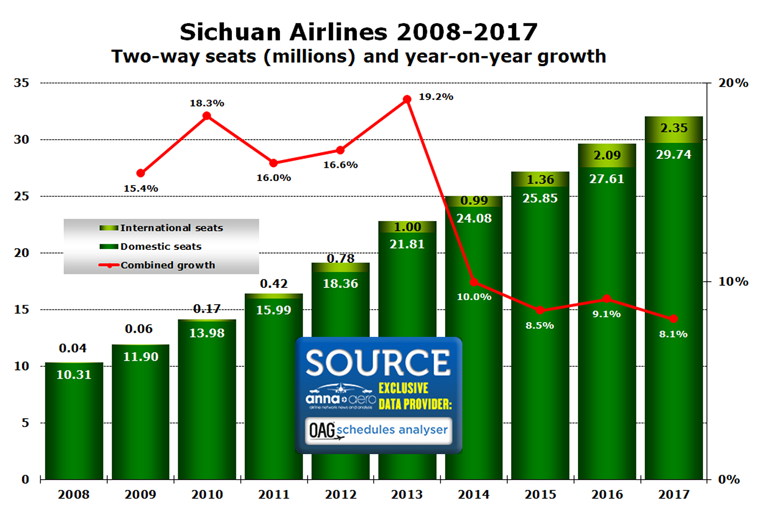 Domestic services account for the vast majority of the airline’s network, although international links are gaining in importance. In 2008, 99.6% of seats were flown on domestic routes. By 2017 this had fallen slightly to 92.7% of all seats. From 2008 to 2017, Sichuan Airlines increased its domestic capacity from 10.3 million seats to 29.7 million, a growth rate of 188%. Over the same period, international capacity increased from just 43,000 seats to 2.4 million, representing a growth rate of 5,350%. International links have witnessed strong momentum over the past three years with capacity increasing by 137% from 2014 to 2017. From 2008 to 2017 average capacity on the airline’s domestic flights increased from 136 seats to 168, while on international services it increased from 150 seats to 203.

Chengdu and Chonqing are the main airports in the Sichuan Airlines network. Between them, the two gateways accounted for more than one quarter of the airline’s departing seats in 2017. They are the leading airports in the carrier’s network for both domestic and international capacity. All of the top 12 airports served by Sichuan Airlines in 2017 were Chinese facilities, which is unsurprising given the proportion of seats operated on domestic sectors. The largest international airports in the airline’s network were Phuket in Thailand and Saipan in the Northern Mariana Islands. The former is served from Chengdu and Chongqing, while the latter is linked to Guangzhou and Shanghai Pudong. 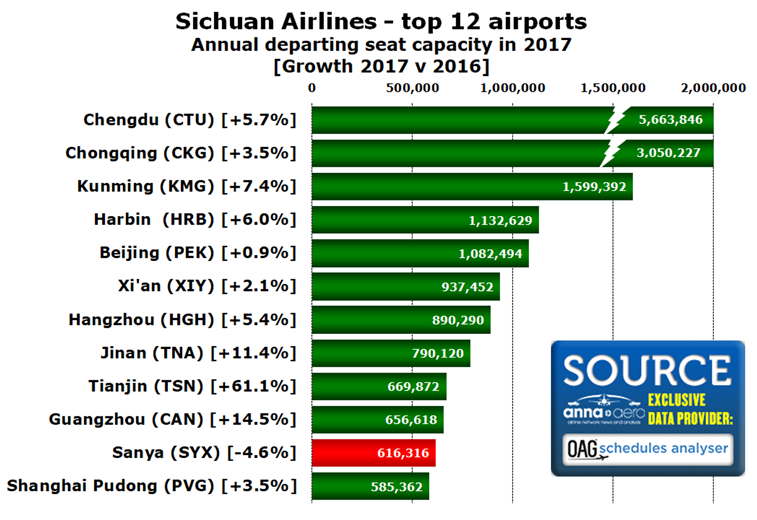 Most of the top 12 airports experienced an increase in departing seats in 2017 compared to the previous year. The largest growth rate came at Tianjin, where available capacity grew from about 416,000 to nearly 670,000 seats, an increase of 61%. Sichuan Airlines served a number of new domestic connections to Tianjin in 2017 that were not operated in 2016, including links to Haikou and Nanchang. The only top-ranked airport to see seats cut in 2017 was Sanya (highlighted in red).

Unsurprisingly, Chengdu and Chongqing dominate the top routes table for Sichuan Airlines. At least one of the two airports was served by 11 of the carrier’s 12 largest routes in 2017. Chengdu is the clear winner, appearing in eight of the top 12 airport pairs. The only top-ranked route to not serve Chengdu or Chongqing is the Harbin-Jinan sector, which was the ninth largest airport pair last year. All of the top 12 routes are domestic services. Of these, the Chengdu-Jinan link witnessed the strongest growth, with one-way seat numbers increasing by 24% from 2016 to 2017. Four of the top routes (highlighted in red) experienced a decrease in capacity during the same period. These were relatively marginal cuts, with the most extreme reduction witnessed on the Guangzhou-Chongqing airport pair, where seat numbers fell by 6.6%. 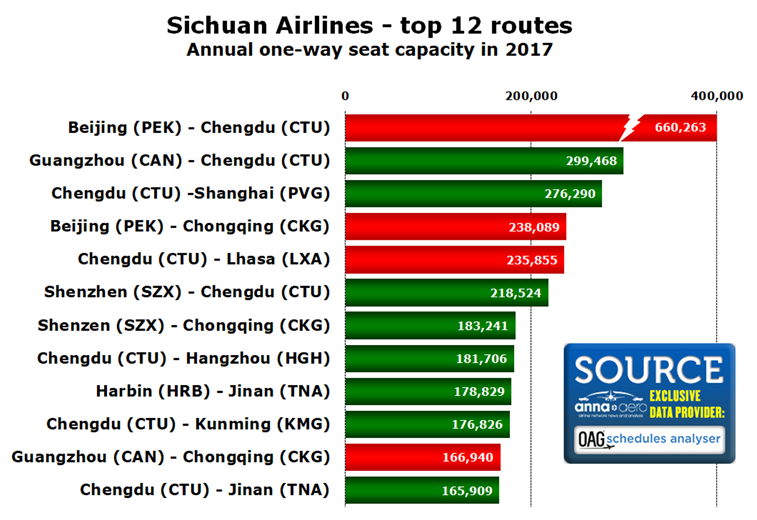 In addition to its domestic network, Sichuan Airlines operated scheduled services to 19 international markets in 2017, although most of these were served by less than 100,000 one-way seats. The airline’s largest international markets in 2017 were Thailand and Vietnam. Services to the US have received a boost in recent times, with a number of new links to Los Angeles established during W16/17. The largest international routes in 2017 were the connections from Chongqing and Chengdu to Phuket. The Chongqing-Phuket link saw some of the strongest growth amongst the airline’s international routes last year, with seat numbers increasing by 86% compared to 2016.

Sichuan Airlines has already launched one new service in 2018, adding a connection between Chengdu and St. Petersburg in January. anna.aero’s New Routes Database shows that at least three other new links have been announced for this year, including an international connection from Chengdu to Zurich, which is due to launch at the start of S18. ch-aviation recently reported that the carrier has signed a firm order agreement with Airbus for 10 A350-900s which it intends to deploy on long-haul routes, indicating further long-haul expansion is on its way. 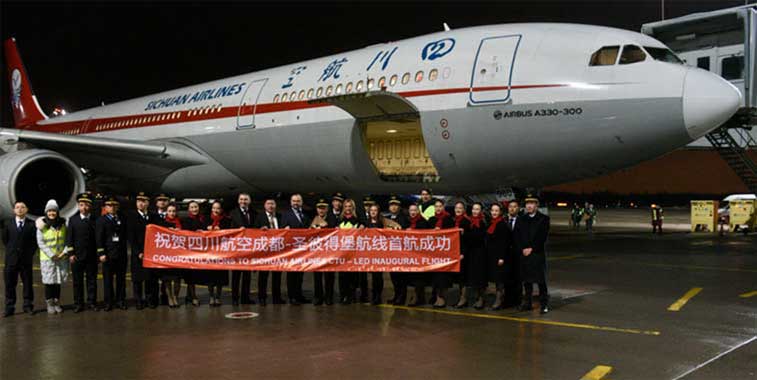 Sichuan Airlines has already introduced one new route this year, with the carrier celebrating its first service from Chengdu to St. Petersburg on 26 January. anna.aero’s New Routes Database shows that at least another three new services have already been announced for 2018. The airline looks to be continuing the trend of long-haul international expansion having recently signed firm order agreements with Airbus for 10 A350-900s.