Bologna-Tel Aviv is “Skyscanner Unserved Route of the Week” with over 115,000 searches; Arkia Israeli Airlines’ next Italian job? 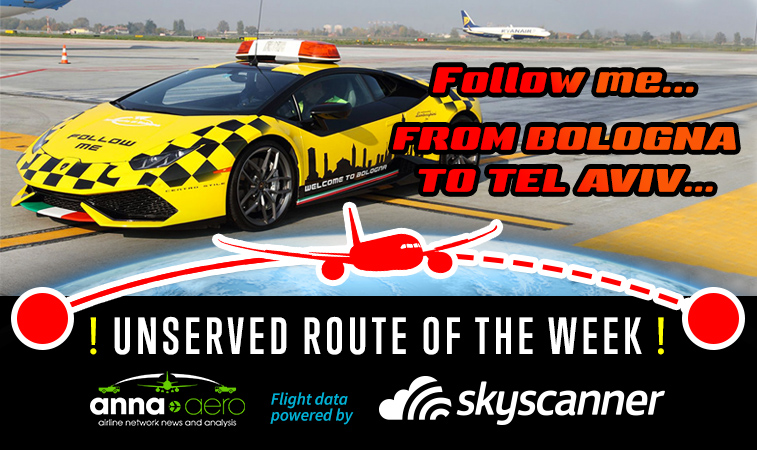 “Follow Me – if you can!” Bologna Airport really does feature these 342 km/h Lamborghinis supplied by its famous next-door neighbour. Demand for a direct Bologna-Tel Aviv service considerably exceeds 100,000 – just on Skyscanner data alone – with 45% of the travellers currently transferring over the two Istanbul airports.

With over 115,000 searches in the last year, a potential city pair from Bologna to Tel Aviv has been identified as this week’s “Skyscanner-anna.aero Unserved Route of the Week” – a powerful analysis based on aspirational data captured from the Skyscanner.net flight comparison site used by +60 million unique visitors per month. “We had a direct connection to Tel Aviv for two summer seasons in a row operated by Arkia,” says Antonello Bonolis, Aviation Business and Corporate Communication Director. “Performances were very good but since last year the route is again unserved.” 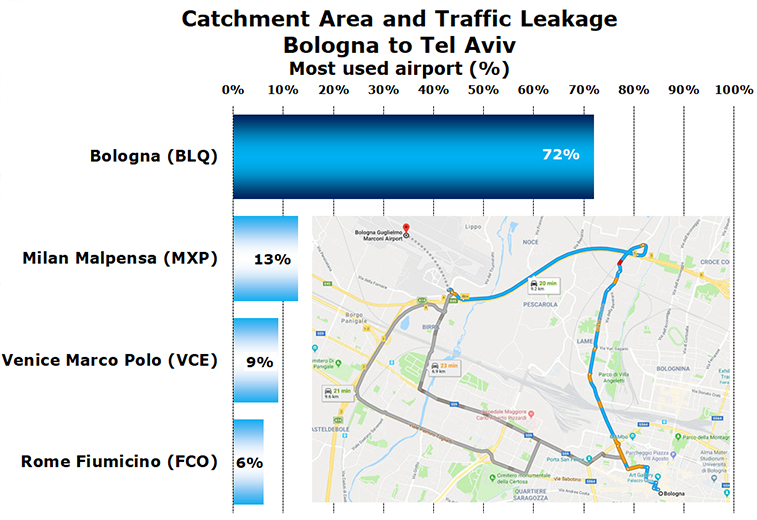 Matt Williamson Skyscanner’s Commercial Executive says: “Bologna serves 72% of the catchment (50 km around the airport) going to Tel Aviv. With a better service, such as a non-stop operation, the traffic could grow by 40%.”

anna.aero advises Arkia or Ryanair to romp onto this route

Skyscanner demand on this week’s unserved route shows a slight preference towards the Tel Aviv end of the city pair, with a 53/47 split, so on this basis we looked at potential carriers at the Israeli origin first. According to OAG schedules for the week commencing 20 February, the largest carrier at Tel Aviv is El Al unsurprisingly (25% share of weekly seats). The airline’s route network from its home hub presently consists of three Italian destinations – namely Rome Fiumicino (served 11 times weekly), Milan Malpensa (eight) and Venice Marco Polo (three). In the summer season, weekly frequencies are going to be increased across these three existing sectors, and a Naples operation (three times weekly) will be added to El Al’s flying programme too, seeing the carrier operate 32 weekly flights to Italy in S18. Much of the carrier’s recent network growth has been in the long-haul market, with Miami launched last November, and San Francisco planned to commence in December 2018. According to the anna.aero New Route Database, the last regional route on which El Al entered from Tel Aviv was a weekly operation to Tbilisi launched in June 2016, so further short-haul growth is well overdue, and now given this compelling Skyscanner data, there is a strong market case for a Bologna service.

Behind El Al at Tel Aviv are a multitude of non-based carriers, like Turkish Airlines (6.5% share of weekly seats), easyJet (5.4%) and Wizz Air (5.0%). It is not until you reach the ninth largest carrier at the airport, namely Israir (2.7%), that a second potential home-based carrier to serve Bologna can be considered. While Israir does currently serve Verona Brescia in Italy, and will serve Verona three times weekly this summer, perhaps a more dynamic solution to this potential route dilemma could come in the form of Tel Aviv’s 12th biggest carrier, Arkia Israeli Airlines (2.5%). As suggested earlier, the carrier did previously operate the city pair until S16. On this basis, having launched a route from Tel Aviv to Milan Bergamo last summer, and also operating flights from the airport to Catania in S18, as well as having plans to start a service to Yerevan this May, a return to Bologna might be more likely with Arkia rather than a fresh operation by Israir. “Indirect traffic to Tel Aviv has gone up considerably lately. As a result, El Al and Sun D’Or [International Airlines] are evaluating the route,” confirms Bonolis.

Contemplating the Italian end of the route, Bologna’s leading capacity provider of its current 33 serving airlines is Ryanair, which offers 42% of the airport’s weekly seats. The ULCC currently operates to 35 destinations from the airport, however none of these are currently in the Middle East. Although this will change later this year, as Bologna has been selected by the airline as one of the 15 new routes which will start in W18/19 to Jordan. That said, Ryanair does also offer daily flights from Rome Fiumicino and four times weekly services from Milan Bergamo to Tel Aviv. Bologna is the carrier’s third biggest operation in Italy (behind Bergamo and Rome Ciampino), so therefore it must be top of the list when it comes to evaluating which markets are to be connected next to Israel. “We cannot exclude that a low cost carrier could open it soon…especially since Ryanair announced the opening of the Amman direct flight,” adds Bonolis. 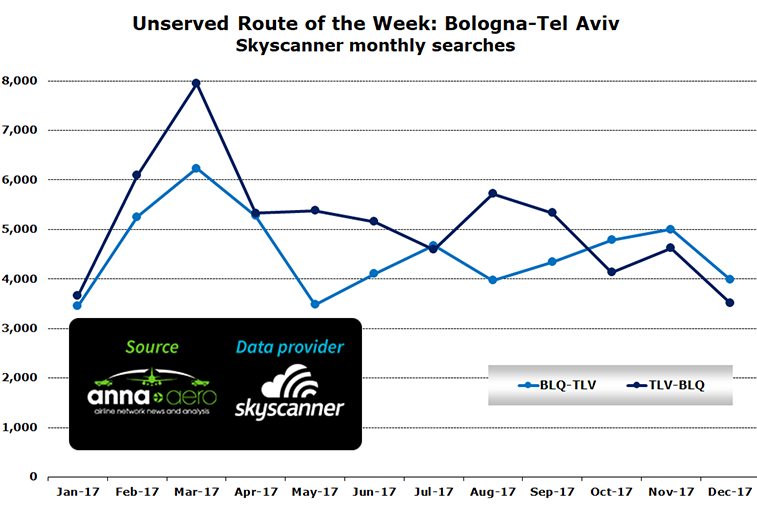 When looking at the previous year of search data (graph above), the busiest month (from Tel Aviv) is March 2017, with nearly 8,000 searches, while the quietest month was December 2017 (3,500 searches). Given the anticipated booking profile of the route – short-haul leisure – around 50% of travellers on this potential sector will want to book between six to four months before departure, so this would seem to indicate that the busiest months for traffic will be between July and September, with the seasonal low being between April and June. Using the same methodology for the Bologna end of the sector, the peak month for traffic will also be between July and September, with the low being between May and July.

According to OAG Traffic Analyser, because there is no direct service, the top three connecting options chosen by those passengers who did book travel between Bologna and Tel Aviv in the last 12 months (year ending December 2017) indicates that the majority of connecting travellers used Istanbul Atatürk (29%), Fiumicino (27%) and Istanbul Sabiha Gökçen (15%). A total of 15 different airports were used as a transfer point between the two cities during the period analysed.

Indeed, an O&D market that is not served by a non-stop flight will typically display a low purchase rate and low traffic. In this instance Skyscanner’s Travel Insight indicates a monthly average purchase rate of 7.4% for the Bologna to Tel Aviv route (see graph below). Therefore, if there was a Bologna to Tel Aviv route, and if bookings performed in line with the “Skyscanner market average” for direct services at both airports (7.7%), the airline operating this route could immediately expect an improved purchase rate of 4.1%, without any increased marketing spend. However, with over 115,000 annual searches in the last year, and with the sector being operated by an appropriately-sized aircraft for the type of route, a two or three times weekly service should be immediately viable for the airline choosing to start this potential city pair. 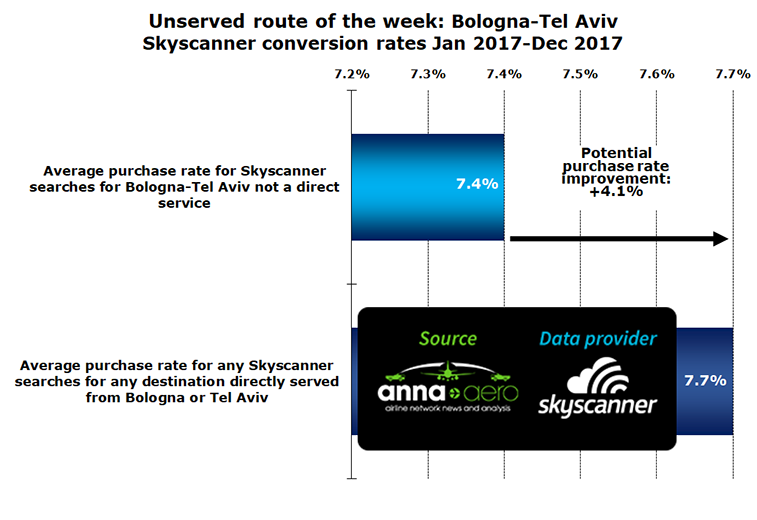