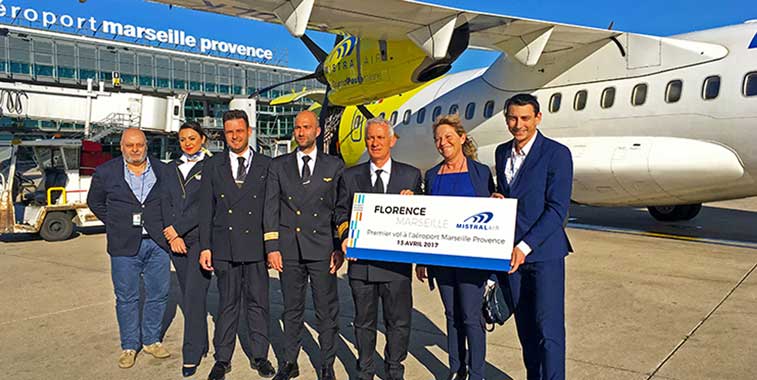 Two-way capacity on flights between France and Italy increased by 16.7% from 2008 to 2017. Seat numbers stagnated last year with a marginal 0.4% drop in capacity when compared to 2016. A notable trend which has been seen in this market is the increase of point-to-point routes linking non-hub airports. Air Mistral added to this last April when it introduced a new twice-weekly service between Florence and Marseille.

There was a marginal 0.4% decline in capacity between France and Italy last year, with available seat numbers dropping from 13.10 million in 2016 to 13.07 million in 2017. Compared to other European country pairs, the Italy-France market was significantly smaller than the one between Germany and Spain, a sector which supported more than 32 million seats last year. It was also smaller than the Italy-Spain market which supported nearly 16 million seats, but larger than the France-Germany country pair which only accounted for 10.55 million two-way seats in 2017.

The France-Italy market witnessed a 17% increase in two-way capacity between 2008 and 2017. This growth rate compares favourably to the France-Germany market which experienced a 1.2% reduction in seats over the same period, but it lags behind that of the Germany-Spain and Italy-Spain country pairs which enjoyed capacity increases of 28% and 30% respectively. The story of the France-Italy market has been one of ups and downs over the past 10 years. The largest year-on-year capacity cut came in 2009 when seat numbers fell by 5.6%, probably due to the global economic downturn. There was a rebound over the next three years with capacity increasing by 13% from 2009 to 2012. A marginal drop in seat numbers took place in 2013, before three consecutive years of growth saw capacity peak at 13.13 million seats in 2016. Vueling contributed to a 6.5% increase in seats in 2015, upping its capacity in the market by 69% versus the previous year, as it ramped-up its Italian network, particularity from Rome Fiumicino. Since 2015, capacity growth between France and Italy has been negligible, with two-way seats increasing by only 1.8%. 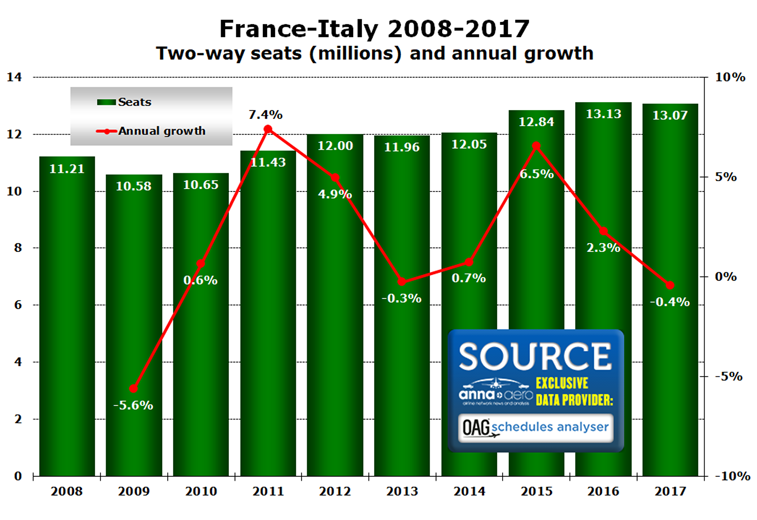 The average capacity on departing flights in the France-Italy market increased from 126 seats in 2008 to 151 in 2017. Narrow-body aircraft provided the most seats, accounting for 92% of all capacity last year, while regional aircraft operated 7.5% of available seats. A very small amount of capacity was recorded as operating on wide-body types, mainly with Pakistan International Airlines. It is unlikely these seats were on sale between France and Italy, but rather part of a triangular services operated by PIA from Milan Malpensa via Paris CDG to Lahore and Islamabad.

The top 12 airports in this market, based on departing seats in 2017, featured seven in Italy and five in France. This analysis considers there to be four main hubs in the market: Paris’ CDG and Orly airports in France, and Fiumicino and Malpensa in Italy. These airports occupy four of the top five positions in the table. The 15 largest routes between France and Italy in 2017 served at least one of the four hubs. The airport pairs with the most available seats were the links between CDG and Fiumicino, plus CDG and Malpensa. Six of the top seven airports in the market represent just three cities, Paris, Rome and Milan. These six airports accounted for 62% of all departing traffic between France and Italy in 2017. 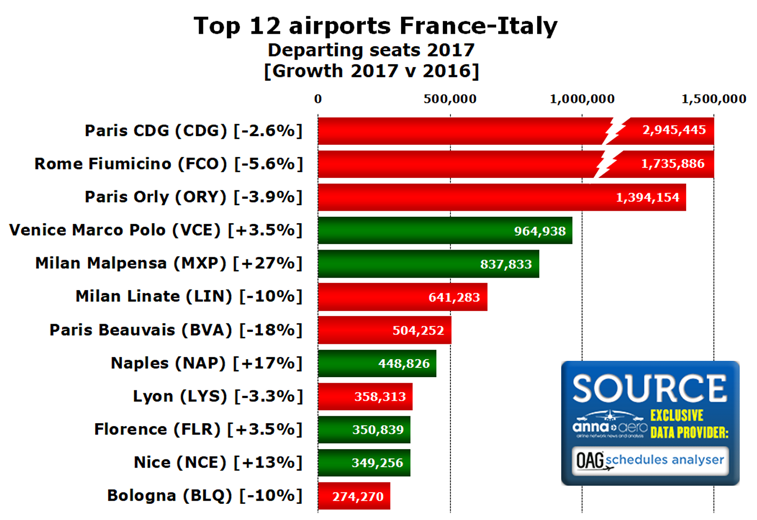 CDG was by far the largest departure point for scheduled services in this market, representing 23% of departing seats last year. The highest ranked non-hub facility was Venice Marco Polo which offered the fourth most departing seats. Five of the top 12 airports experienced an increase in capacity in the France-Italy market from 2016 to 2017. The largest growth came from Malpensa (27% increase) and Naples (17%). One of the largest contributing factors to the extra seats at Malpensa was Air France’s decision to resume a CDG link to the former airport, supporting its existing Linate service. Seven of the top-ranked airports (highlighted in red) witnessed a reduction in departing seats between France and Italy last year. The largest cuts were experienced at Paris Beauvais, Linate and Bologna.

The four main hubs have consistently accounted for more than half of all departing seats between France and Italy over the past 10 years but the other airports in the market are closing the capacity gap. The four hubs accounted for 60% of departing seats in 2008 but this had fallen to 53% by 2017. From 2008 to 2017 the number of seats available from the hub airports grew from 6.68 million to 6.91 million, representing an increase of 3.4%. Over the same period the departing seats available from non-hub facilities increased from 4.52 million to 6.16 million, representing a growth rate of 36%. 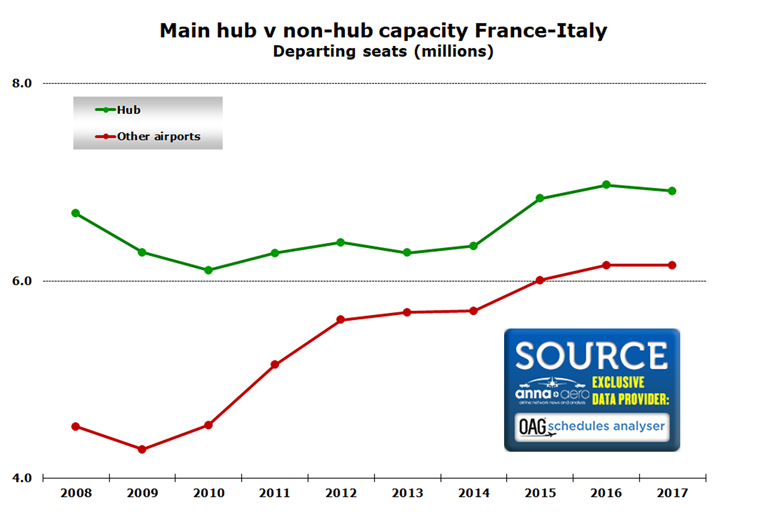 easyJet provided the most capacity in the France-Italy market during 2017, accounting for 30% of all departing seats. This country pair is a good example of the European Single Aviation Market in practice, with three of top five carriers (easyJet, Ryanair and Vueling) being foreign LCCs or ULCCs. These airlines are registered outside of France and Italy and are operating routes between the two countries without serving their home markets under seventh freedom rights. Between them, they provided half of the capacity available in the France-Italy market last year. The remainder of the top 12 carriers included three French and three Italian operators, including the two respective flag carriers. 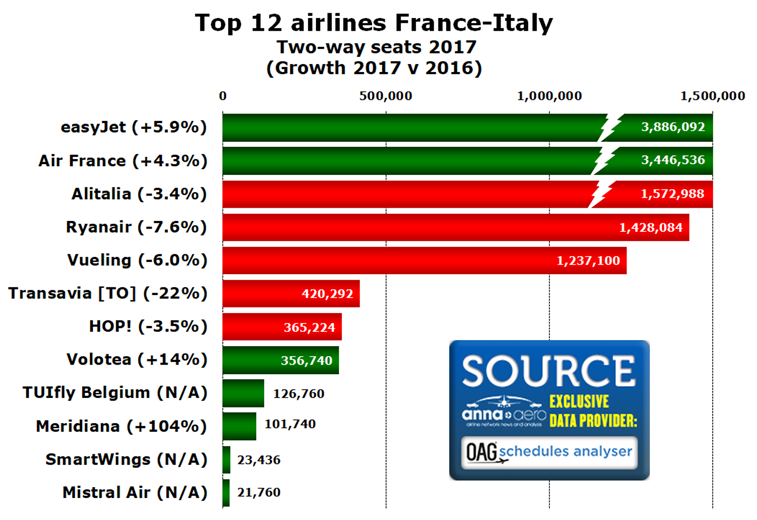 Seven of the top 12 airlines experienced growth in this market in 2017, with Meridiana more than doubling its capacity from the previous year. The Italian operator added seats to existing services and introduced a new route linking Cagliari with Marseille. It remains to be seen what impact the recently announced re-branding of Meridiana as Air Italy will have on the airline’s network growth strategy. Volotea also enjoyed strong growth in the market, increasing its capacity by 14%. Five of the top 12 carriers (highlighted in red) cut capacity in the France-Italy country pair last year. The largest reduction came from the French arm of Transavia (IATA code TO), which reduced seat numbers by 22%. The LCC cut seat numbers on some sectors and removed a link from Orly to Pisa from its network for 2017.

According to anna.aero’s New Routes Database 20 new services have already been announced for the France-Italy market in 2018. Eight of these will serve one of the four main hubs, with the other twelve linking non-hub facilities. This suggests that the trend for more point-to-point routes between non-hub airports continues to gather momentum. 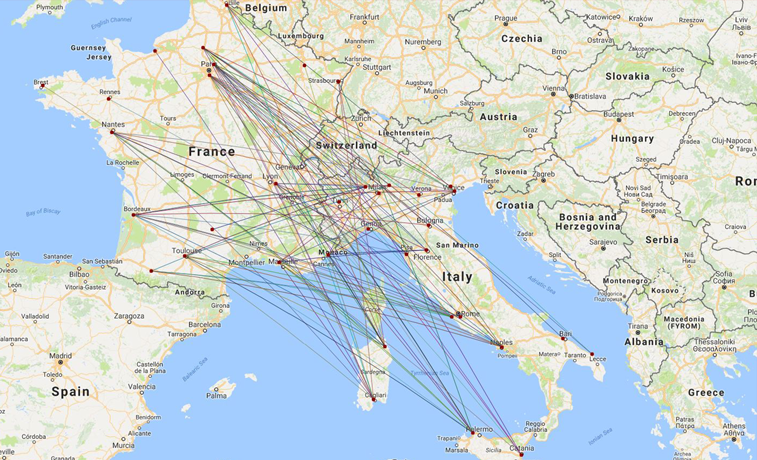