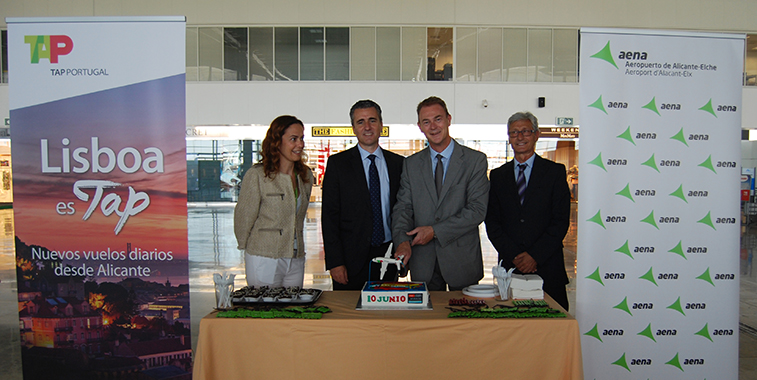 TAP Portugal expanded its operations to Alicante last year, starting a 747-kilometre daily route from Lisbon and Spain’s fifth biggest airport. The addition of new routes like this last year allowed the airport to post a record traffic figure of 13.71 million passengers in 2017, with the 14 million milestone likely to be broken in 2018.

Alicante was Spain’s fifth busiest airport in 2017, behind the country’s two major hubs in Madrid and Barcelona, as well as the fellow inbound traffic hot spots of Palma de Mallorca and Malaga. However, as Gran Canaria is the main operational base (in terms of weekly seats and frequencies) for the Canaries’ inter-island operator BinterCanarias, the airport is only the sixth busiest in Spain for movements and 10th largest in terms of cargo throughput, according to Aena data for last year.

The airport is currently served by 26 airlines (based on OAG schedules for w/c 23 February), a result which like the vast majority of Europe’s airports (and indeed Spain’s) peaks in the summer and not the winter, with 35 carriers offering services during a high season week in S18. The same can be said for the airport’s network of non-stop destinations, which rises from 89 in February to 121 in July.

The airport’s traffic figures have risen and fallen throughout the period 2008-2011, failing to breaking the 10 million annual passenger milestone on each occasion. However since a traffic low-point in 2012, Alicante’s passenger numbers have plotted a steady upward trajectory, averaging a substantial 9.2% annual growth between 2013 and 2017. It should be noted that the airport has increased the gap between it and the sixth largest Spanish airport (Gran Canaria) over the last 12 months, as the latter’s traffic only rose by 8.3% to 13.1 million. 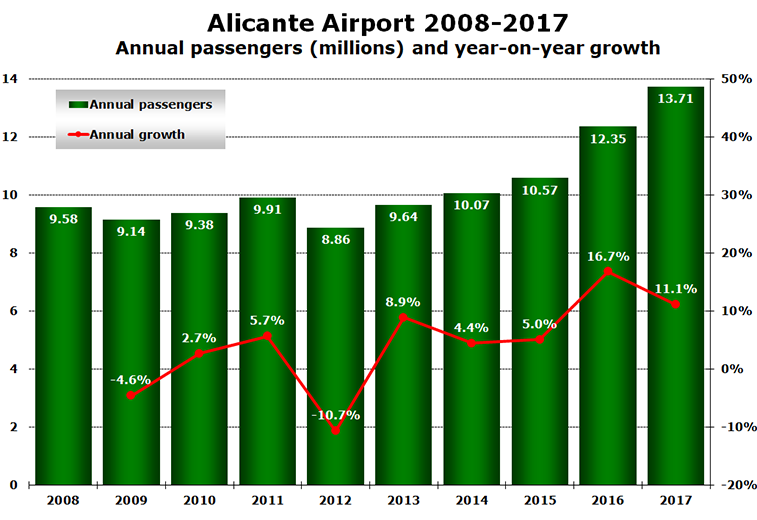 In 2017, Alicante’s annual growth of 11.1% was above the national average which was a far from sluggish 8.3%. Although it is of course early days, Alicante has slipped behind the Spanish average growth for 2018 so far, with its January passenger increase being just 3.0% compared to 8.7% across the whole country. However, even if the airport maintains this level of monthly growth throughout the next 12 months, Alicante should break the 14 million annual passenger figure in 2018.

Given Spain’s appeal for primarily summer inbound tourism, Alicante could easily be an airport with some difficult to manage seasonality extremes, however its monthly traffic in 2017 was not as peaky as might have been expected. When using anna.aero’s SVID calculator, the airport delivers a score of 10.81, which just pushed it into the “Poor” ratings. Comparing this seasonal performance against those of its nearest domestic rivals – Spain’s fourth largest airport Malaga and sixth largest Gran Canaria – Alicante is better than the former but lags behind the latter. Malaga has a more seasonal traffic profile than Alicante (scoring 11.63, also “Poor”), while Gran Canaria’s year-round appeal means its monthly passenger figures yield it a very healthy score of 1.06.

When looking at the 2015 and 2016 seasonality scores of Alicante’s monthly throughput, the airport made some progress in flattening the profile of its traffic, only to slip back last year. In 2015, the airport achieved a “Poor” rating with a score of 11.19, and then slightly improved on this in 2016 to deliver a result of 10.46, only to fall back to 10.81 in 2017. Looking forward to this year’s SVID score for Alicante, the anna.aero data elves are predicting a further worsening of its score in the “Poor” category, with an anticipated result of around 11.2.

Rather than look at the year-on-year development of Alicante in terms of its top airlines and routes, we have considered the airport’s schedules for this week versus those in a typical week in the summer (w/c 23 July 2018). While the top carrier goes unchanged between the two sample weeks (Ryanair’s capacity is expected to be 80% larger in S18 versus W17/18), the #2 capacity provider in the winter – Vueling – despite offering 47% more seats available in July when compared to February at Alicante, is pipped to second spot by easyJet in the summer, with just less than 1,000 extra weekly seats than the IAG-owned LCC. However the airline in the top 12 with the biggest step-up in its summer capacity versus the winter is SAS, which will offer over 200% more seats (9,632 vs 3,136). On the flip-side of this trend is Air Europa, which will provide 40% less seats in the summer against those it flew in February. However, it should be noted that the airline may not have fully filed its S18 flying programme with OAG from Alicante yet, which may have impacted this result. 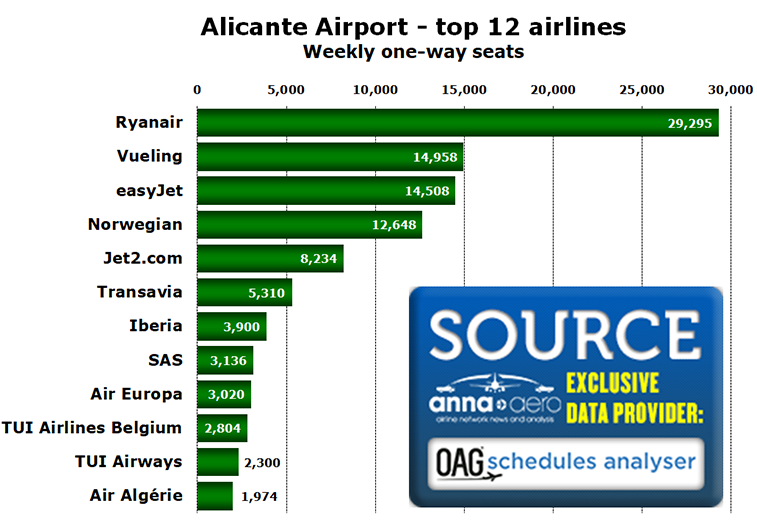 The top 12 airlines control 93% of the winter sample week seats, a little higher than the result achieved in S18, when the most important carriers from Alicante command 87% of weekly capacity. Two airlines, Air Europa and Air Algérie, represent those carriers which will fall out of the top 12 for the sample summer week when compared to the winter week, and are replaced in 11th and 12th spots by British Airways and S7 Airlines respectively. Air Europa and Air Algérie will take up 17th and 15th places in July. One airline which is noticeable by its lack of presence in the top 12 is Wizz Air, being 18th largest carrier in the winter schedule (640 weekly seats) and 19th in the summer programme (1,720 weekly seats).

UK and domestic links are vital

Services to the UK from Alicante are a vital component of the airport’s weekly seats, with four UK destinations featuring in the winter schedules. However, this increases to seven during the peak period, with East Midlands (seventh), Leeds Bradford (10th) and Birmingham (12th) added to the existing four UK markets. While capacity to Barcelona (-0.2%) and Madrid (-0.8%) are both reasonably static, the seats available to Palma de Mallorca is more changeable between winter and summer, with 27% more flying in July against the number of weekly seats offered in February. Barcelona’s relatively flat capacity profile has allowed the more spiky Manchester (up to second; 81% summer vs winter growth), Oslo Gardermoen (third; 48%) and Amsterdam (fourth; 68%) airports to push past Spain’s second busiest facility in the rankings during S18. 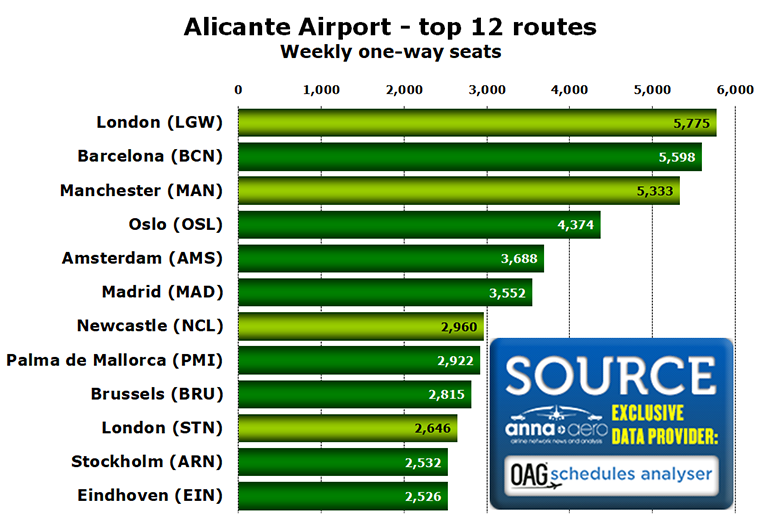 The top 12 routes command 40.7% of the winter sample week capacity, marginally ahead of the result achieved in S18, when the most important sectors from Alicante control 40.6% of weekly seats. Three winter routes fall out of the top 12 during the peak summer period, with Madrid dropping to 20th spot, Palma de Mallorca down to 16th position, and Eindhoven falling to 22nd place. These ranking declines come despite 27% increases in capacity between February and July at the last two airports. The fastest growing airport inside the top 12 routes listing is London Stansted, which is planned to experience a 107% increase in its summer capacity when compared to its current number of weekly seats. This result is just ahead of Stockholm Arlanda, which is anticipated to deliver a 91% improvement in its S18 capacity offer versus this week in February.

Looking ahead to the S18 and beyond, the Spanish airport is set to welcome a basket of new services from mulitple carriers, predominantly from the low-cost sector, according to anna.aero’s New Route Database: Northern invasion. Alicante’s network of non-stop destinations, rises from 89 in February to 121 in July. When comparing sample weeks in those months, Spain’s the sixth busiest airport for movements will offer 77% more seats in July versus this week in February.