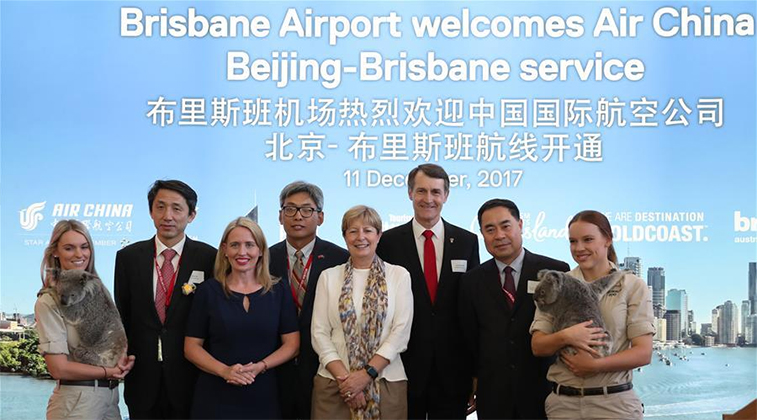 Brisbane Airport, the destination for many airline and airport network planners who are heading down to Australia for Routes Asia 2018, heralded the arrival of Air China back in December. In the 12 months leading up to 30 November 2017, Brisbane posted an increase in traffic of 1.9%, while Air China increased its seat capacity from Australia by over 24%. Despite the carrier’s impressive growth, it is still only Australia’s 21st largest operator.

Now anna.aero can’t speak for every airline and airport network planner in the world, but we’re sure that some, along with our data elves, have got the song “Down Under” by Men at Work stuck in their heads as they get presentations and final paperwork ready for heading to Brisbane for Routes Asia 2018, where we will also be producing our glamorous Show Dailies. This year’s event will take place between the 18 and 20 March at the Brisbane Convention & Exhibition Centre. Given that many people in the network planning industry will be heading to Australia in a few weeks’ time, and Qantas’ new Perth to London Heathrow link will begin a few days after the conference has finished (more detail on this route market below), anna.aero has decided to track what has happened in Australia in recent years, including the trends of the past 12 months.

Between January and November last year (last known data), some 144.51 million passengers flew to/from and within Australia. Of the passengers flown in the first 11 months of 2017, 108.72 million were carried on domestic and regional operators according to the Bureau of Infrastructure, Transport and Regional Economics (BITRE), with 35.79 million transported by international carriers. The average monthly rate of growth for passengers flown by domestic and regional carriers up until 30 November was 1.6%, with 5.4% recorded by international operators. With this data, anna.aero has forecast that a total of just over 158.67 million people will have travelled from Australian airports in 2017, with 119.06 million choosing to travel on domestic and regional operators, and 39.65 million on international airlines. 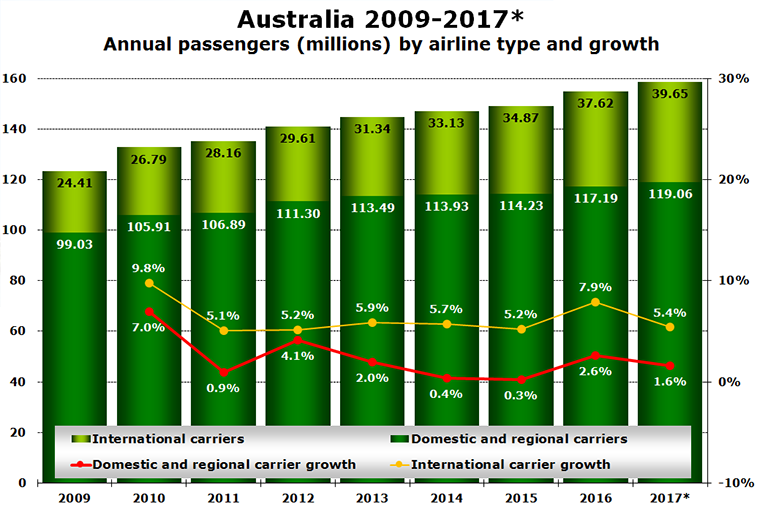 In total, the number of passengers flying from Australia has increased by 29% between 2009 and 2017. As can be seen from the graph above, the stronger growth has been coming from international carriers, with non-Australian airline traffic growing on average three times faster per year than domestic and regional operators. This result excludes data for 2014 and 2015, years when international carrier traffic grew close to 17 times faster than that flown on Australian airlines. Between 2009 and 2017, the number of annual passengers flown by domestic and regional operators grew by 20%, however the number of travellers on international carriers grew by a resounding 62%. International airlines have increased their market share of Australian travellers from 19% in 2009 to 25% in 2017, now capturing a quarter of the market.

The sun’s out at the Sunshine Coast

Given its name, it is not just the natural sun shining down on the Sunshine Coast, but also the vitamin D of aviation – passenger growth. In the 12 months leading up to 30 November 2017, Sunshine Coast hosted 11% more passengers than it did in the same 12-month period ending 30 November 2016, representing an extra 114,386 people flying through its terminal. Most of this growth has come from increased capacity on existing services, with the last new route launch from the airport being towards the end of 2016 when Jetstar Airways launched flights from Adelaide. 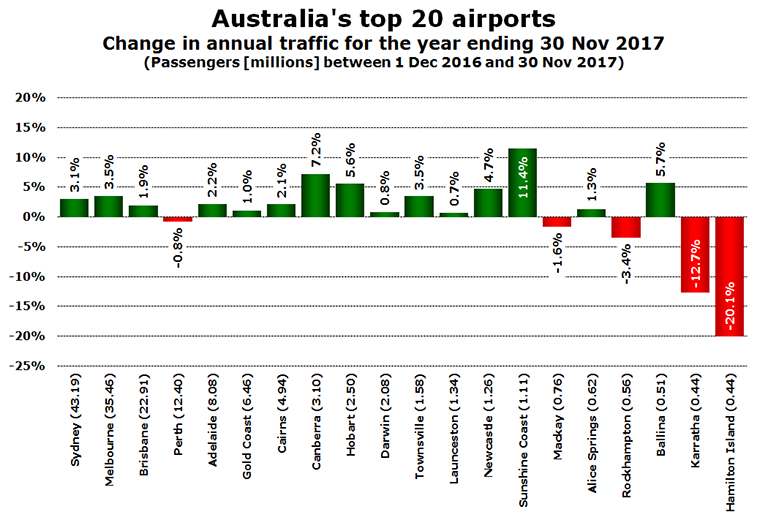 Along with Sunshine Coast, another airport which has reported a solid development in traffic is Canberra, which in the 12-month period analysed saw a 7.2% upswing in demand. The airport will hope to extend athis trend, particularly given the recent arrival of Qatar Airways’ new link from Doha, a route operated via Sydney. Following Canberra in third place is Ballina, which witnessed traffic grow 5.7%, Hobart in Tasmania was fourth with a 5.6% rise, while Newcastle was fifth, posting a 4.7% increase in passengers. The leading hubs of Sydney (3.1% growth), Melbourne (3.5%) and Brisbane (1.9%) also produced solid performances.

Given that it is Australia’s flag carrier, it is of no surprise to see Qantas as the nation’s leading airline, operating close to 68.50 million seats in 2017, representing 33% of all capacity in Australia last year. While Qantas is the largest airline it, along with Jetstar Airways (both highlighted in light red), reported cuts in capacity during 2017, with the former posting a 1.7% drop in seats, while the latter operated 2.1% less seats when compared to its 2016 operation. 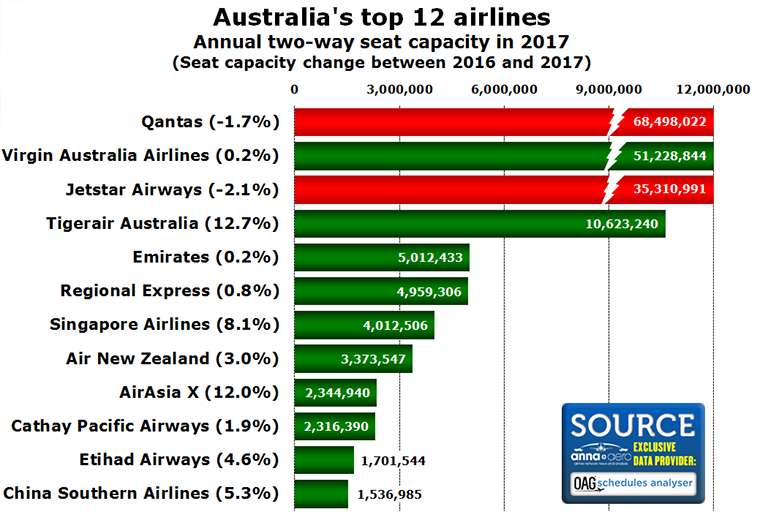 The average growth reported by Australia’s leading airlines last year was 3.8%. Outside of the top 12, significant growth has been posted by Chinese airlines, including China Eastern Airlines (17th largest airline) and Air China (21st) which experienced 36% and 24% rises in capacity respectively.

Given that Australia is one of the largest countries on earth, land transportation is often less viable than aviation for regional connectivity, which is why the domestic market is by far the most dominant. The domestic market is over 14 times larger than the biggest international country pairing – New Zealand. Despite its majority share of the market, with Australian services accounting for 75% of all seats in 2017, this fully mature sector has witnessed 0.4% drop in capacity. This translates to just under 700,000 less seats when compared to 2016. With this reduction, the Australian domestic market has seen its majority share of seats fall by 1.1 percentage points since 2016. Despite the cuts of non-international seats, all other major country markets from Australia appear to be performing well, with all those in the top 20 seeing creditable increases in capacity over the past year. 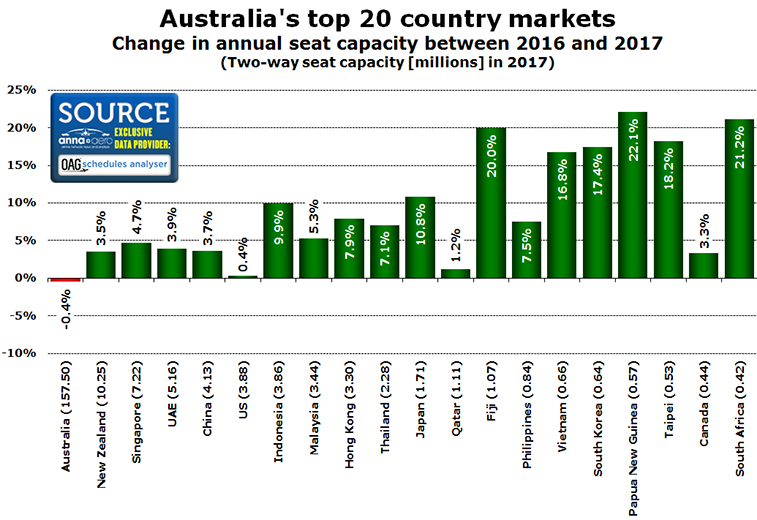 Of the top 20 markets from Australia, three have seen a growth rate above 20%, namely Fiji (13th largest country market), Papua New Guinea (17th) and South Africa (20th). In total Australia was connected to 36 nations last year, the same total recorded in 2016, with no markets being added or taken away from the schedule.

However, things are about to heat up in 2018 as Qantas prepares to launch the only non-stop flight between Australia and Europe, in the form of a link from Perth to London Heathrow. When referring to OAG Traffic Analyser data, some 322,500 people travelled between the UK and Perth in 2017, with around 63% of this market travelling to London, so Qantas is entering a sizeable market to sustain a daily service. However with Dubai (33% of connecting traffic – Emirates), Doha (18% – Qatar Airways), Singapore (16% – Singapore Airlines) and Abu Dhabi (13% – Etihad Airways) all holding a respectable share of the current market, it will be hard for the Australian national carrier to break the hold of these airlines’ services. Qantas is keen to extract a premium from passengers wishing to benefit from a non-stop flight to Europe, as its charging around 32% more per ticket than its nearest rival (based on flight costs during the first week of the route’s operation), with the Australian airline charging £750 versus £570 on Singapore Airlines. 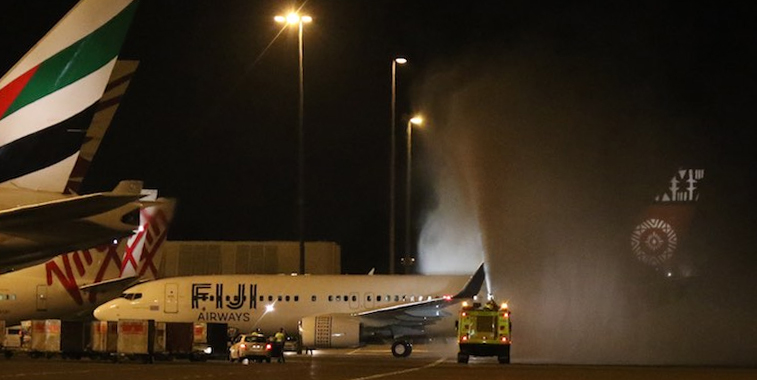 Adelaide, which in the 12 months leading up to 30 November 2017 saw a 2.2% increase in traffic, welcomed the arrival of Fiji Airways back in July. Fiji was one of the best performing markets for growth from Australia in 2017, seeing a respectable 20% increase in capacity versus 2016.