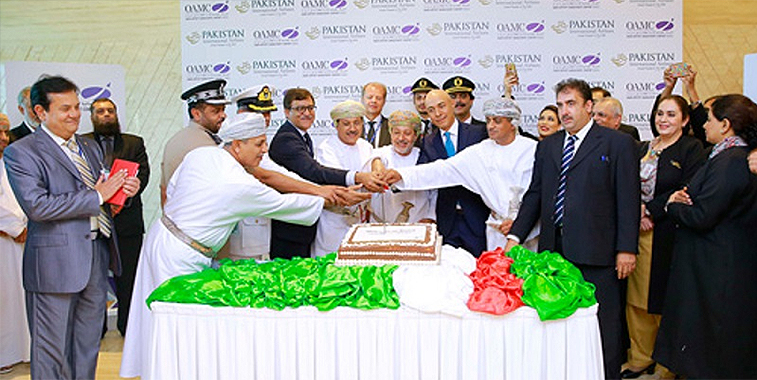 Pakistan International Airlines flew more than 7.8 million seats across its network in 2017, a marginal 0.2% increase compared to 2016. As far as anna.aero can tell, the airline’s last new route launch was from Islamabad to Salalah, with dignitaries in the above photo celebrating the first flight back in December 2016. This route has subsequently been discontinued with the final service operating on 24 January according to OAG schedules.

Pakistan International Airlines (PIA) is the flag carrier of Pakistan. ch-aviation records that PIA’s active fleet currently stands at 31 aircraft, including four ATR 42-500s, five ATR 72-500s, 11 A320s, seven 777-200s (including both LR and ER variants) and four 777-300s. It also has a further five A320s on order. PIA has been the subject of privatisation rumours and on 26 February ch-aviation reported that Pakistan’s Cabinet Committee on Privatization (CCOP) has given approval to a plan which could see the government sell a 49% stake in the airline.

A review of the past 10 years reveals several peaks and troughs in PIA’s capacity. There were three years of consecutive growth between 2008 and 2011 which resulted in two-way seat numbers peaking at 8.9 million in 2011. There then followed three years of double-digit cuts which saw seat numbers fall to a low of 5.8 million in 2014, representing a 34% reduction in capacity versus the levels of 2011. PIA’s annual reports for 2012 and 2013 explain a number of challenges the corporation faced during this period of cuts, including delays in new aircraft acquisitions to replace ageing types, economic challenges, prevailing law and order conditions in Pakistan, plus increasing competition. From 2015 onwards, the airline began adding capacity once again, with the strongest year-on-year increase taking place in 2016. From 2014 to 2017 two-way capacity had increased by 34%, although seat numbers remained static last year when looked against 2016, growing by a marginal 0.2%. 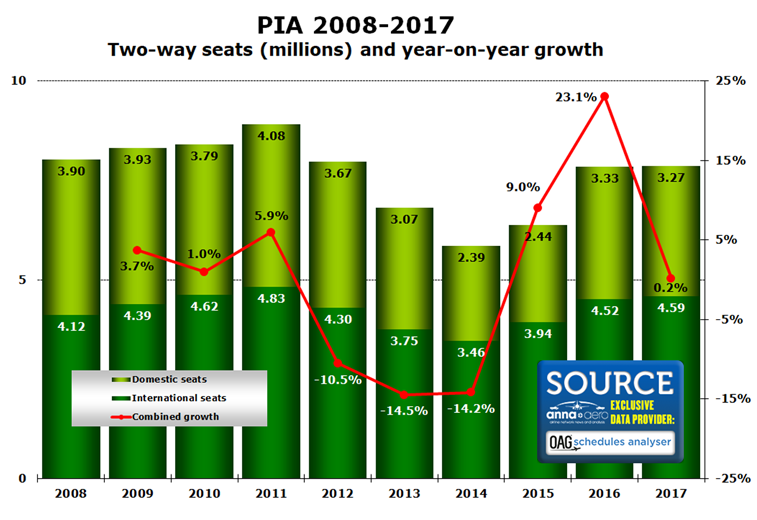 Karachi is the largest hub in PIA’s network, but Islamabad and Lahore are also significant operations for the carrier. Between them, these three airports accounted for 54% of all departing seats for the airline in 2017. Seven of PIA’s top 12 airports were located in Pakistan, with two in each of the UAE and the UK, plus one in Saudi Arabia receptively. The largest international airports in the carrier’s network, based on departing seats, were Jeddah, Dubai and Manchester. 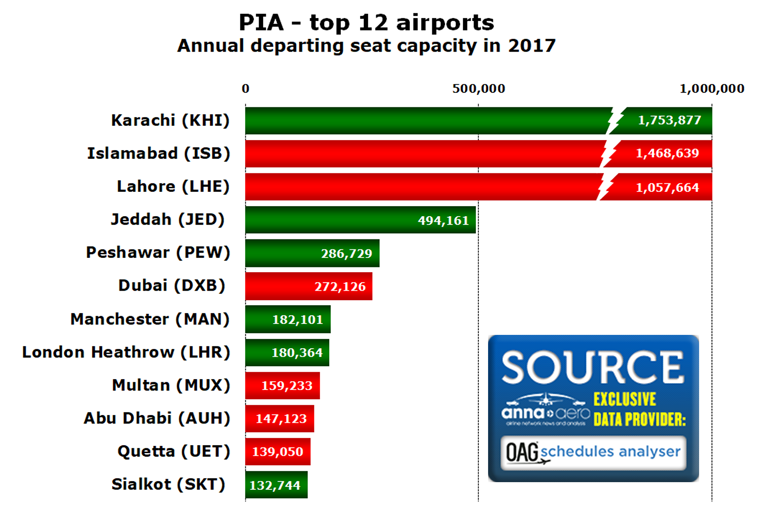 Half of PIA’s top 12 airports experienced an increase in capacity from the airline in 2017. The strongest growth was witnessed at Sialkot (12% increase in seats) and Jeddah (8%). Both airports benefited from an increase in capacity on services from Karachi. Outside of the top-ranked facilities, two more Pakistani airports experienced strong percentage growth from their national carrier last year, with Faisalabad and Sukkur seeing 36% and 35% increases in seats respectively when compared to 2016. Six of the top 12 airports (highlighted in red) witnessed capacity cuts from PIA last year. The largest of these came at Quetta, where  14% of seats were lost, although the main hubs were not immune from reductions themselves, with Lahore suffering 10% cut backs. The drop-off at PIA’s third largest airport was mainly a result of reducing available seats on certain routes, rather than cutting connections entirely.

The two largest airport pairs operated by PIA, based on 2017 capacity, were domestic links between its largest airports, namely the Karachi-Islamabad and Lahore-Karachi links. The airline also operates an Islamabad-Lahore service and this was its tenth largest route last year. All of the top 12 routes serve one of the carrier’s three main bases. Karachi and Islamabad each feature in six of the top 12 routes, while Lahore is represented at one end of three of the largest airport pairs. In total, five of the airline’s top-ranked routes from last year were domestic services. The largest international routes were the Karachi-Jeddah and Islamabad-Manchester links. 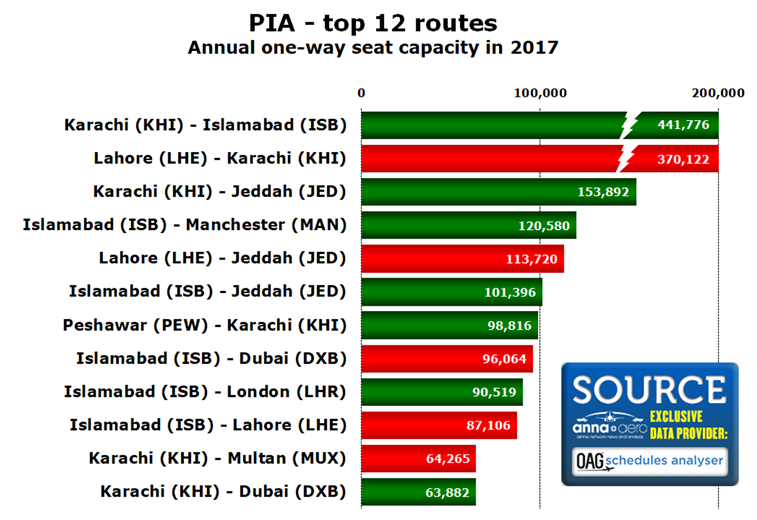 Jeddah featured three times amongst PIA’s top six routes in 2017, with links from each of the airline’s three main bases, so it is not surprising that Saudi Arabia is the carrier’s largest international country market, accounting for more than one-third of its one-way international capacity last year. The next largest international markets were the UAE, UK and Oman. PIA operated 80% of its international seats to these four markets in 2017. Five of the top 12 country markets were in the Middle East, three were in Europe, two were in the Asia Pacific and one (Bangladesh) was in Asia. The country markets that saw the largest increases in capacity from PIA last year were France (90% increase – a result of the inbound Lahore route becoming non-stop) and China (30%). 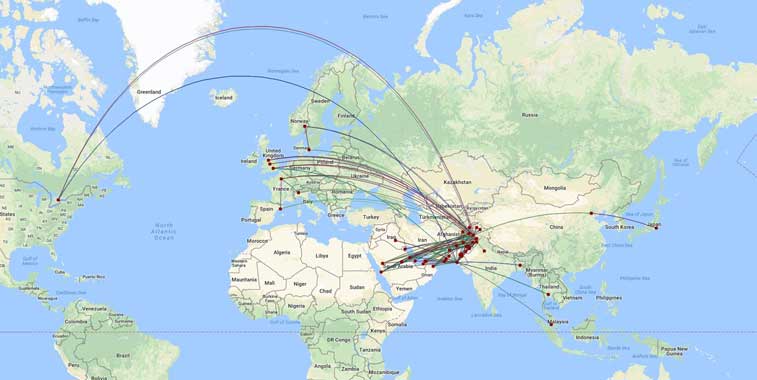 PIA’s largest hub is Karachi, but Islamabad and Lahore are also important bases. Between them, these three airports accounted for 54% of the airline’s departing seats in 2017. The route map for the week commencing 27 February shows a concentration of links to the Middle East, with Saudi Arabia the airline’s largest international market. There are also a number of connections to Europe and further afield to Canada and the Asia Pacific.