Boeing opens up a 17-unit lead over Airbus during the first month of the 2018 delivery race; TUI Group gets first MAX 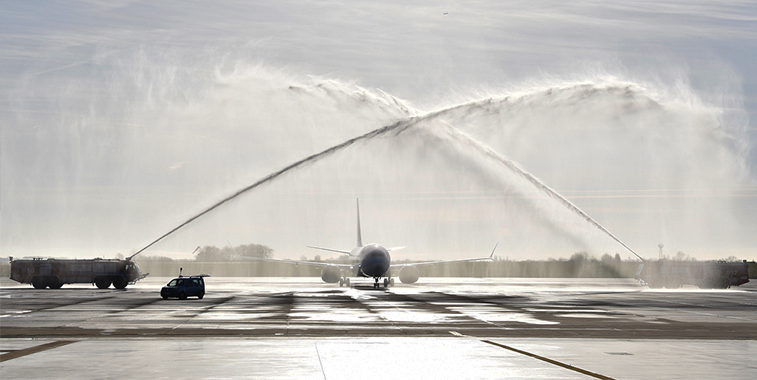 TUI Airlines Belgium, part of the TUI Group, welcomed its first 737 MAX 8 to Brussels in January, with the Belgian capital city airport welcoming the arrival of its newest based aircraft with this splendid water salute. Boeing has already opened up a 17-unit lead over Airbus in the 2018 delivery race, with it handing over 44 aircraft last month, including 13 being wide-body units. Airbus meanwhile distributed 27 aircraft, with only six of these being wide-bodies.

Airbus and Boeing have kick-started the 2018 delivery race by handing over 71 aircraft between them, two more (or 2.9% improvement) on the 69 that both managed to deliver during the first month of 2018. While the combined tally is a marked gain on the result of January 2017, the productivity rate of both aviation giants is down by a mighty 195% when compared to December last year, a month when the North American and European manufacturers handed over a whopping 210 aircraft between them. Overall, Boeing was by far the biggest of the two in terms of deliveries in January, with the Seattle-based company providing 44 aircraft versus Airbus’ 27. For the Toulouse-based company, it handed over two more aircraft than it did in the first month of 2017, whereas Boeing’s productivity rate remained constant. Of all deliveries in January, 73% were made-up of single-aisle aircraft, with the other 27% being wide-bodies. 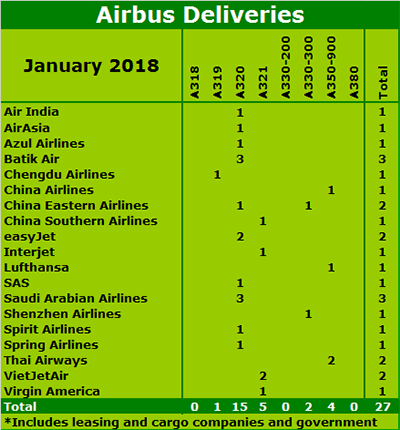 Airbus ended January with a total of 27 deliveries, made-up of 21 narrow-body and six wide-body aircraft. While this result is two units higher than the company’s benchmark of January 2017 (21 single-aisle; four wide-body), its January performance was not as productive as December. In the last month of 2017, Airbus distributed 127 aircraft, 100 more than in January. For the first month of 2018, single-aisle deliveries were led by the A320 (15 units) followed by the A321 (five). One A319 was also delivered in January, with Chengdu Airlines being the sole customer. The leading recipients of the A320 were Batik Air and Saudi Arabian Airlines, with both picking up three each. Following these two carriers was easyJet which greeted an additional two units to its fleet. With regards to the A321, the number one customer was VietJetAir, with the Vietnamese carrier collecting two units. This follows on from the six A321s that the Asian airline took delivery of in December.

In relation to the wide-body market, Airbus delivered only six units, two more than it managed in January 2017. The leading wide-body aircraft type was the A350-900, with four being handed over to customers last month. The #1 customer of the aircraft was Thai Airways, with it seeing two more join its fleet, with one each going to China Airlines and Lufthansa respectively. Following the A350-900, two A330-300s were also rolled off the production line in January, with one going to China Eastern Airlines and the other to Shenzhen Airlines. 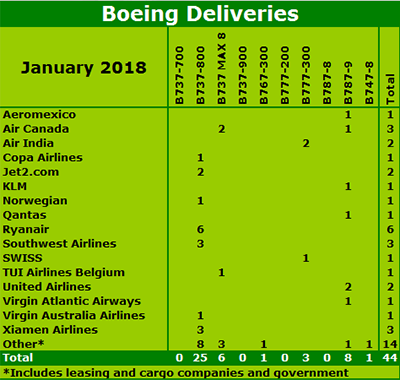 Boeing ended the first month of 2018 with 44 deliveries, of which 31 were single-aisle and 13 wide-body.  The result is equal to its performance in January 2017, however, like Airbus, its productivity rate was significantly reduced versus December, a month which saw the North American giant handover 83 aircraft. Of the 44 deliveries in January, 25 were 737-800s, with a further six being 737 MAX 8s, with one of these going to TUI Airlines Belgium, the European carrier’s first delivery of the type. The leading customer of Boeing’s premier narrow-body model, the 737-800, was Ryanair which took home six. The European ULCC was followed by Southwest Airlines in the customer pecking order, with the US’ leading LCC collecting three 737-800s.

An analysis of the wide-body market shows that Boeing handed over 13 wide-body aircraft in January, seven more than Airbus. However the Seattle-based company did distribute 14 wide-body variants during the same month of 2017. The leading model to be delivered was the 787-9, with United Airlines being the #1 customer, collecting two of the type. Along with the 787-9s, one 747-8 was given to a leasing company, with three 777-300s also being delivered to Air India (two) and SWISS (one) respectively. 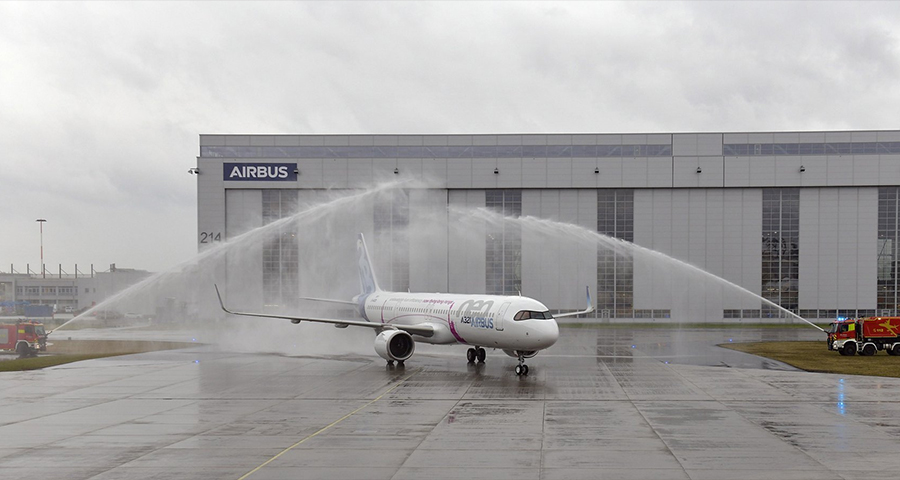 Along with Airbus managing to deliver two more aircraft in January versus the same month of 2017, the first month of this year was also a milestone for the European manufacturer as the first A321LR, currently registered as MSN7877, accomplished its maiden flight. After the mission was completed, the aircraft was greeted with this water arch salute as it touched back down. Klaus Roewe, Head of A320 Programme, stated: “Thanks to its outstanding performance and unbeatable efficiency, the A321LR will allow customers to perform flights of up to 4,000nm, allowing them to open new routes – for example transatlantic – plus conquer new markets.”