Malmö-London is “Skyscanner Unserved Route of the Week” with 75,000 searches; Flybe’s next niche route from London Southend? 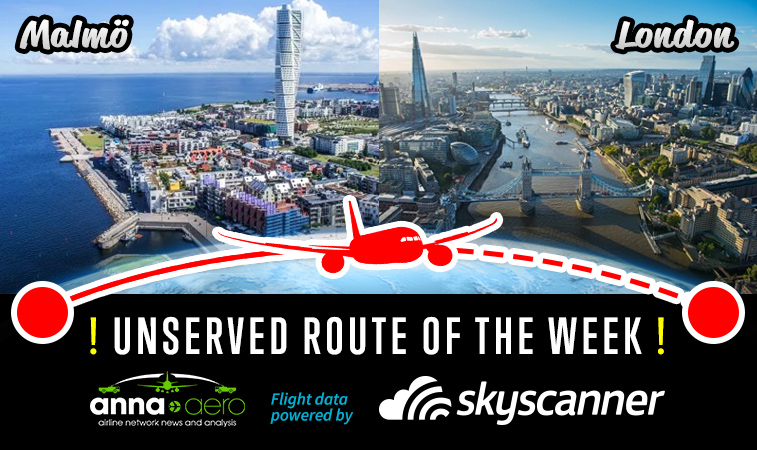 The Malmö paradox. Despite there being thousands of monthly seats from Copenhagen to London hoovering-up demand from the Skåne Region of Sweden just over the Oresund Bridge there is no service to the UK capital city from Malmö. anna.aero thinks that Wizz Air or Flybe should be considering this niche route, especially knowing that 75,000 travellers are searching for flights.

With nearly 75,000 searches in the past 12 months, a potential city pair from Malmö to London has been identified as this week’s “Skyscanner-anna.aero Unserved Route of the Week” – a powerful analysis based on aspirational data captured from the Skyscanner.net flight comparison site used by +60 million unique visitors per month. “When we look at Malmö-London we talk about the Malmö Paradox,” states Helena Mårtén, Business Development Manager at Swedavia. “There is around the same capacity to Stockholm from both Malmö [115 flights per month] and Copenhagen [104 flights per month] and both routes are operated by SAS and Norwegian. However, on the route from Malmö to London there is no capacity today, and yet from Copenhagen there are 129 flights per week!” 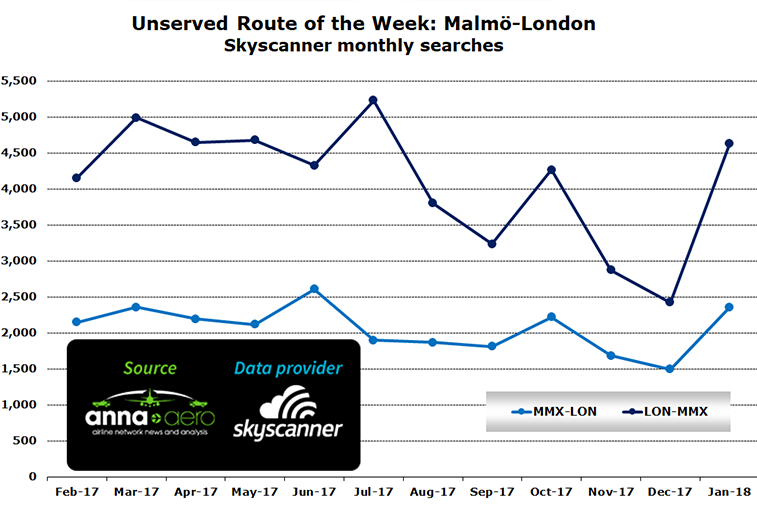 Skyscanner demand on this week’s unserved route shows a preference towards the London end of the city pair, with a 67/33 split, so on this basis we looked at potential carriers at the UK origin first. Much of Malmö’s potential demand to London will be counted as surface leakage to Copenhagen, which is less than 30 kilometres from the Swedish city across the Oresund Bridge. In addition to this, there are also multiple airport options at the UK end. On this basis, and in order to give any potential new carrier a niche market to serve, our data elves have decided to consider only those London airports which do not have a Copenhagen route. With London Heathrow served by British Airways and SAS (both with 39 weekly flights), London Gatwick flown by Norwegian (37) and easyJet (20), London Stansted operated by Ryanair (18), and London Luton served also by the Irish ULCC (daily), this leaves London City and London Southend.

According to OAG schedules for the week commencing 27 February, the largest carrier at City is British Airways (52% share of weekly seats). The airline’s 24 point non-stop route network from London’s fifth largest airport presently consists of just two Scandinavian destinations, namely Billund (served 11 times weekly) and Reykjavik/Keflavik (twice-weekly). When referring to schedules for the last 10 years, Malmö has never been served between 2008 and today from City, but Copenhagen was last flown by BA between 2010 and 2012. Perhaps in offering a niche to the Swedish city rather than the overserved Danish one, the oneworld carrier may be able to make this airport pair work, and become its third route to Scandinavia from its third biggest operation of the four airports it serves across the UK capital city.

Moving east across London, Southend’s biggest carrier of its current two serving airlines in terms of weekly seats is easyJet (54% share of weekly seats). The LCC presently flies to 11 destinations from Southend, all of which are served from one or more of London’s other airports, and cater for a predominantly outbound market. Southend’s other serving carrier is Flybe, and with routes to niche destinations like Rennes (flown nine times weekly) and Groningen (six) that are the only flights from these cities into London, the UK regional airline is perhaps a better option when considering a potential sector to Malmö.

Contemplating the Swedish end of the route, Malmö’s leading capacity provider of its current nine serving airlines is Wizz Air, which offers 28% of the city’s weekly seats. The ULCC is clearly keen on serving its Central and Eastern European network from Malmö, with its present 12 destinations spread across Bosnia and Herzegovina, Hungary, Macedonia, Poland, Romania and Serbia. However, as the airline established a base at Luton last summer, there is the possibility of Wizz Air considering a link to the Swedish city, its 19th largest operation, joining its existing operation to Vilnius and Riga in the region – especially given this compelling Skyscanner data.

January is likely low travel month from both ends

When looking at the previous year of search data (graph above), the busiest month for potential traffic flows (from London) is July 2017, with over 5,200 searches, while the quietest month was December 2017 (2,400 searches). Given the anticipated booking profile of the route – short-haul business – 80% of travellers on this potential sector will want to book in the last month before departure, so this would seem to indicate that the busiest month for traffic will be August, with the seasonal low being in January. Using the same methodology for the Swedish end of the sector, the peak month for traffic will be July, with the yearly low also being January.

According to OAG Traffic Analyser, because there is no direct service, the top three connecting options chosen by those passengers who did book travel between Malmö and London in the last 12 months (year ending January 2018) indicates that the majority of connecting travellers used Stockholm Arlanda (99%) with the residual shared between Oslo Gardemoen and Helsinki. Just to reiterate the majority of passengers will leak by road and rail to Copenhagen for a direct service to London. 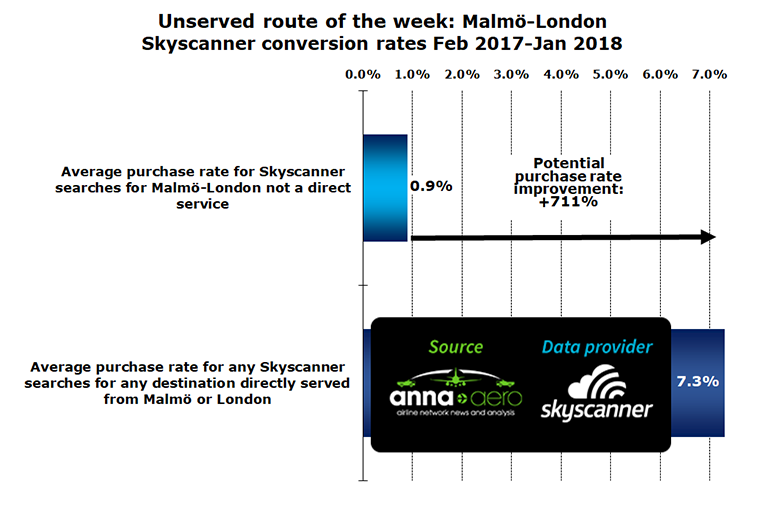 Indeed, an O&D market that is not served by a non-stop flight will typically display a low purchase rate and low traffic. In this instance Skyscanner’s Travel Insight indicates a monthly average purchase rate of 0.9% for the Malmö to London route (see graph above). Therefore, if there was a Malmö to London route, and if bookings performed in line with the “Skyscanner market average” for direct services at both airports (7.3%), the airline operating this route could immediately expect an improved purchase rate of a whopping 711%, without any increased marketing spend. However, with around 75,000 annual searches in the last year, and with the sector being operated by an appropriately-sized aircraft for the type of route, a two or three times weekly service should be immediately viable for the airline choosing to start this potential city pair.

“London was operated from Malmö a few years ago [until November 2014] when Ryanair still had a large operation here,” says Mårtén. “Then the airline made the strategic decision to focus on capital airports and left Malmö for Copehagen. During that time we saw a large volume of incoming Brits on the route and today the trend in Sweden is that incoming leisure is still increasing.” When it comes to overnight stays the UK is the #3 in the Skåne Region when it comes to foreign guest nights, behind Germany and Denmark and ahead of Netherlands and Norway. “Keep in mind that this is the only market where you need to fly!” concludes Mårtén.