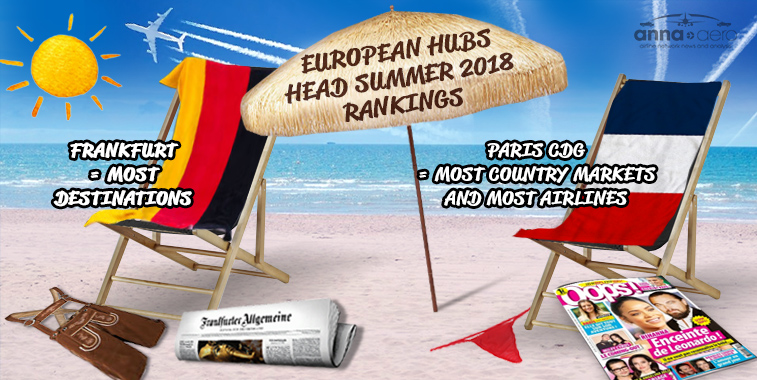 Could German and French tourists have an advantage in the great summer getaway this year? Their main hubs will certainly offer unrivalled opportunities for travel, topping the charts in anna.aero’s pre-season preview of S18 airport activity. For a typical peak week in July, Frankfurt is currently scheduled to offer more destinations than any other airport, while Paris CDG is due to see services to the most country markets and welcome the most airlines.

An analysis of OAG schedules for a typical peak week in July 2018 reveals that Frankfurt will serve more non-stop destinations than any other airport worldwide, while Paris CDG will provide links to the most country markets. The Parisian hub will also be served by the most airlines. Both airports maintain the number one rankings they enjoyed for the equivalent week in S17. Frankfurt and CDG rate highly in all three categories measured here, with the former finishing in the top four on each occasion, while the latter features in the top two in all three tables. There is a strong presence from European hubs in general across all three categories and a more in depth break down can be seen in the following graphs.

Like the recent airline preview, this analysis does not account for all flights scheduled for the entire summer season, but is based on a typical week in the peak period, in this case the week commencing 24 July 2018. Some airlines have not filed their entire summer schedules yet, but taking this peak week as an example should give a good snapshot of what is to come. The obvious caveat is that more routes may yet be added. The S18 data is compared to the week commencing 25 July 2017.

Frankfurt is scheduled to provide the most routes in the week under analysis, with nearly 300 different destinations on offer. It maintains top spot in this category from the equivalent week in S17 and has actually extended its route advantage over the second placed airport from eight to 17, after increasing the destinations in its network by 19. Lufthansa’s other main hub at Munich also features in the top six in the destination league table, with 237 routes on offer. The top seven remains largely unchanged from the equivalent week in S17, the only movers being Istanbul Atatürk and CDG, with the Parisian hub trading places with it Turkish’s counterpart to move into second from third. There is a strong European feel amongst the top 15 airports for destinations served. In all, eight of the top 15 (highlighted in blue) can be classed as European airports. The remainder include three (highlighted in red) major US hubs, two airports in China, and one each in the UAE and Turkey. 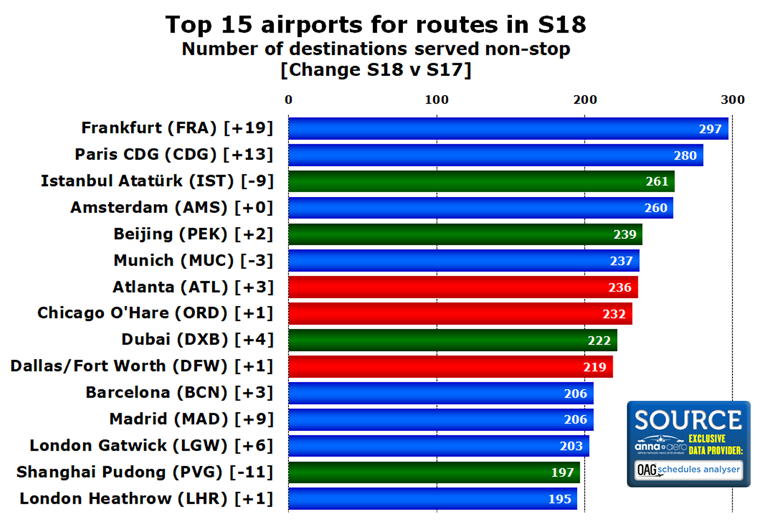 Frankfurt, CDG and Madrid witnessed the largest increases in destinations compared to S17, with the three airports seeing their route maps boosted by 19,13 and nine extra links respectively. Notable additions to Frankfurt’s network since last July included 20 new services from Ryanair while CDG and Madrid will both welcome new low-cost long-haul services operated by Norwegian to the US during S18. Only three airports will offer fewer destinations in S18 compared to the equivalent week last year. Shanghai Pudong will offer 11 fewer destinations, while the departure boards at Atatürk and Munich will be down by nine and three routes respectively.

CDG will offer the most connections to different countries in the week under analysis, a distinction it also enjoyed in S17. The French hub has actually doubled its lead over its nearest rival Atatürk, serving eight more countries than the Turkish airport in S18, compared to four more last summer. The top four airports in this category remain in the same positions they occupied during the equivalent week in S17. European hubs (highlighted in blue) are dominant in this category, accounting for 11 of the top 15 airports for country markets served in S18. It is not surprising that two of the large Middle East airports (Dubai and Doha – highlighted in orange) feature in the top 15 given their hub-and-spoke networks, connecting east with west, operated by their dominant carriers Emirates and Qatar Airways. Interestingly there were no airports from the Asia Pacific region in the top 15. It is also noticeable that New York JFK is the only US hub to feature in the top-ranked airports, despite only being the fifth largest facility in the US, based on departing seats during the week commencing 24 July. This is due to a high proportion of capacity at major US hubs being operated on domestic links. The largest US airports for departing seats in the week under analysis are Atlanta, Los Angeles, Chicago O’Hare, Dallas/Fort Worth and New York JFK. The latter was the only one of the five to see more than half of its departing capacity leaving on international services, with domestic links accounting for 87% of seats from Atlanta, 70% from Los Angeles 82% from O’Hare and 86% from Dallas/Fort Worth. 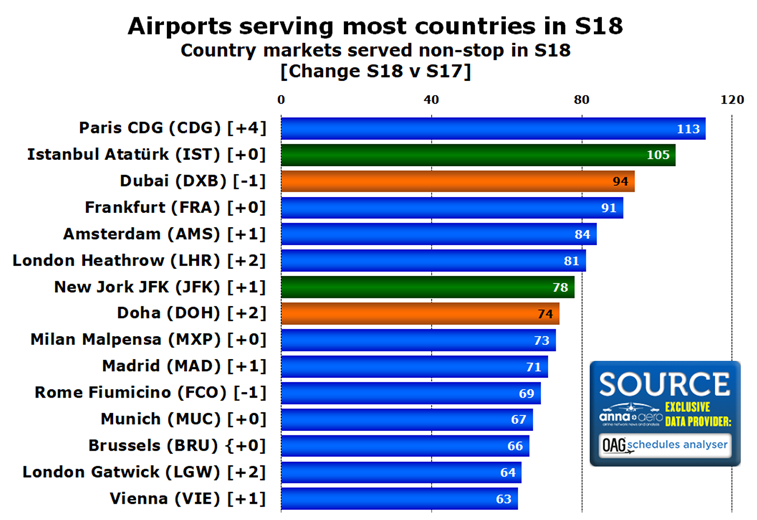 There were only marginal differences in the number of countries served by the top-ranked airports compared to S17. The biggest increase came at CDG with four extra international markets available this year. Planned additions to the Parisan hubs’ route network this summer include services to Saint-Pierre in Saint-Pierre and Miquelon and to Tbilisi in Georgia. OAG schedules show that there will also be services available to Costa Rica this summer, while two flights to Greenland have been filed during S18, suggesting some form of charter arrangement. Only two of the top 15 airports saw a reduction in country markets served, and even then it was only by one route. These were Dubai and Rome Fiumicino. Given Turkish Airlines’ position at the top of our recent rankings for most country markets served by a single airline, it is not surprising that Atatürk finishes in the upper echelons of this category. The fact that it finishes second to CDG suggests that the French airport has more connections offered by non-based carriers.

France’s largest hub also tops the third category in this analysis, in that it will be served by the most airlines during the peak week considered here. Paris CDG maintains the 15-airline lead it held over Bangkok Survarnabhumi last year. Eight of the top-ranked airports are European hubs (highlighted in blue). This is the strongest representation from Asia Pacific airports (highlighted in green) in the three categories assessed, with six making the top 15 for airline numbers. New York JFK is again the sole representative from the US and none of the Middle East hubs make the top 15. 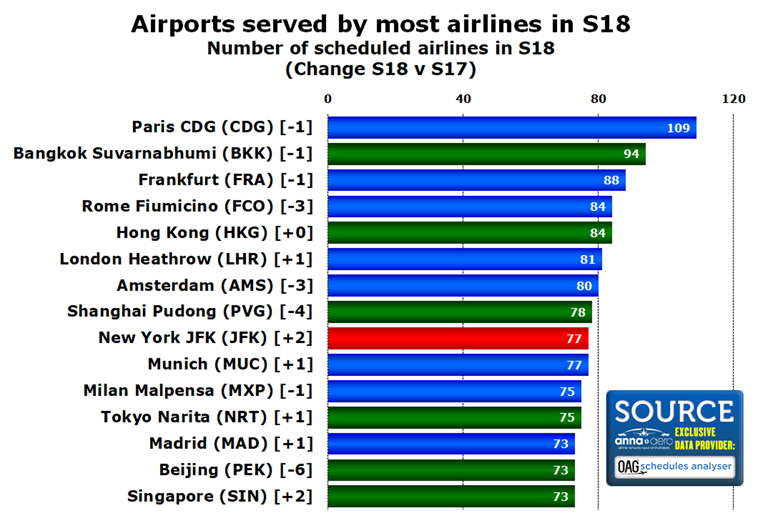 Six of the top 15 airports are due to see additional airlines gracing their stands this summer, with New York JFK and Singapore leading the way with two extra carriers each. Eight of the top-ranked airports are currently scheduled to see a reduction in airline numbers with Beijing losing six and Shanghai Pudong currently down four, although it should be remembered that some airlines may not have filed their full summer schedules yet. Hong Kong is the only top 15 airport that is currently due to welcome the same number of airlines for a second consecutive summer.

There is still time for operators to make adjustments and additions to their schedules for S18 and the best place to keep on top of the latest developments is right here. Keep monitoring anna.aero to find out the latest new route announcements as and when they happen. 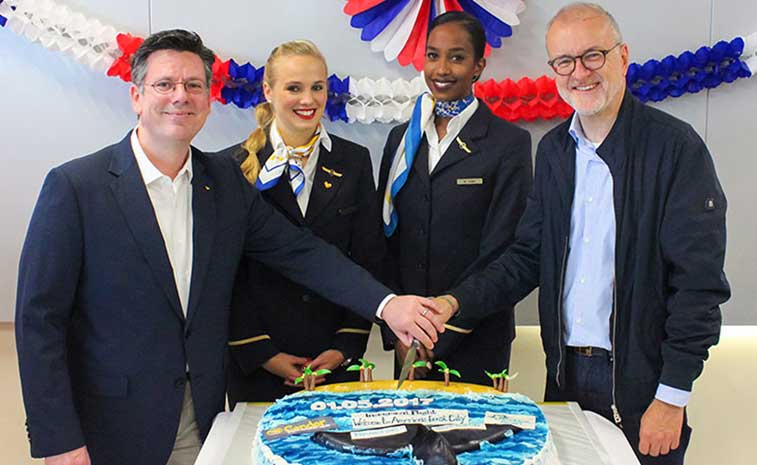 Frankfurt is again due to offer more destinations than any other airport during a peak week in July with 297 available, 17 more than nearest rival Paris CDG. The German hub also topped the charts in this category in S17. Frankfurt will also serve the fourth-most country markets and welcome the third-most airlines. In May last year the airport celebrated the launch of Condor services to San Diego.