Ryanair calls time on Glasgow where it is currently the third biggest airline; more than one aircraft being lost as 19 routes are poised to close 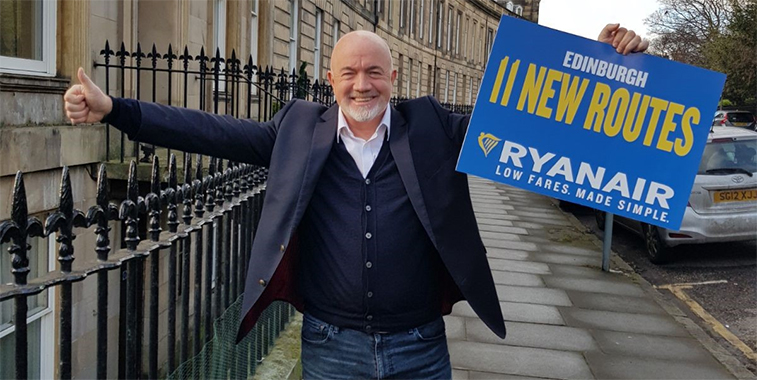 Glasgow’s loss is certainly Edinburgh’s gain. Ryanair confirmed on 27 February that from the start of W18/19 it would close its base at Glasgow and move its based winter aircraft to Edinburgh. While David O’Brien may certainly be rejoicing in the carrier’s expansion from Edinburgh this winter, it would appear that the true story from the airline’s press conference in the Scottish capital was not told, as anna.aero suggests that Glasgow will really lose two-based units.

Ryanair announced on 27 February that it is to close its base at Glasgow. “Ryanair regrets these cuts in the weaker Glasgow market where efforts to stimulate low-fare demand are severely hampered by the continuing burden of APD. As a result, we will transfer our Glasgow-based aircraft to Edinburgh in November where we will offer 11 new routes (45 in total including London Stansted) and deliver over 3.5 million passengers per annum at Edinburgh Airport,” commented David O’Brien, CCO of Ryanair on the base closure at Glasgow. Ryanair opened its Glasgow base on 26 October 2014, meaning the closure will occur just four years after it opened.

At present, the airline offers 22 routes from Glasgow, whereas this coming winter it will be served from just Dublin, Krakow and Wroclaw by the airline. Presently Ryanair is Glasgow’s third largest carrier behind easyJet and British Airways, offering over 1.5 million seats in 2017. It translates to the Irish ULCC having had 13% of all seats from the Scottish airport last year. This compares to easyJet which had a 21% share of the Glasgow market in 2017 and BA holding a 15% stake. Sitting behind Ryanair in fourth is Flybe (12% of the market) with Jet2.com in fifth (8.8%).

More than one aircraft lost

Ryanair stated in its press release that its one aircraft at Glasgow will move to Edinburgh, however, in true Ryanair public relations style, it failed to leave out the fact that Glasgow is actually a two-aircraft base in summer, with it being just a one-aircraft operation in the off-peak months. This winter season coincides with the base closure, so anna.aero can see why they will have worded the release like this, as it lessens the true impact of the closure.

anna.aero can reveal through an extensive analysis of the airline’s summer schedule from Glasgow that two aircraft are certainly needed. Nonetheless, given the lengthy turnaround timings of some of the services flown on Glasgow-based aircraft, Ryanair’s operation does not conform to its normal efficient rotation pattern (25-minute turnaround), with some turnarounds lasting up to an hour. For instance, aircraft one on Mondays, Tuesdays and Wednesdays spends between 50 minutes to one hour and 15 minutes on the ground between rotations. Given these operational complexities at Glasgow, this might suggest that there is more than just APD (Air Passenger Duty) to blame for the base closure. The table below illustrates the schedule for the two-based aircraft at Glasgow this summer.

The table above shows that aircraft one averages just two sectors a day, apart from on Thursdays, Fridays and Sundays when it fills the gap between its two longer sectors with a short hop to Derry. Aircraft two’s main purpose for being in Glasgow is to operate the early morning rotation to London Stansted, with it then able to support two further rotations a day. Returning to aircraft one, its first departure of the day from Glasgow ranges from 06:15 on Thursdays to 08:30 on Tuesdays, some two hours and 15 minutes behind its earliest rotation of the week. This tells us that there may be operational constraints at Glasgow on certain days of the week that do not allow the aircraft to depart before this time, which must be a frustration for Ryanair, as it will surely be wanting to get the most out of the aircraft during the summer months. However, it should be noted that the airline does provide some early departures from Glasgow, but these are flown on aircraft from other bases, with routes such as Frankfurt seeing a 07:05 arrival and a 07:30 departure back to Germany. In total Ryanair will be offering 94 departures from Glasgow this summer, with only 40% of these services being operated on a Glasgow-based aircraft.

While Ryanair is closing its Glasgow operation, needless to say it has not left the city entirely, with the airline currently expected to serve 16 routes from Glasgow Prestwick this summer using at least three based units. Of those 16 Prestwick services, the following are also flown by the airline from Glasgow this summer, namely: Alicante, Gran Canaria, Lanzarote and Malaga. The table below shows the breakdown of the days of operation for the four routes from both airports.

Looking at the schedule, Prestwick looks to be the preferred operation for leisure services, with it supporting more weekly rotations on three of the four routes, with only Lanzarote seeing the same amount of frequencies at both airports. One benefit for Ryanair in closing its Glasgow operation is that on these four routes they will now presumably be able to increase the financial performance and traffic figures at Prestwick.

Consulting Ryanair’s press release, it will move the following routes from Glasgow to Edinburgh: Derry, Lisbon, Sofia, Riga and Berlin Schönefeld. Since Ryanair’s announcement, Loganair has confirmed that it will take over the Glasgow to Derry route from the start of W18/19. Of these services, only Derry, Lisbon and Riga are flown on Glasgow-stationed aircraft, with Sofia and Schönefeld currently flown on units based at the latter airports. Along with these five routes, Edinburgh also gains Gothenburg, Hamburg, Memmingen, Stockholm Skavsta, Seville and Tallinn. So while Ryanair stated it was moving the Glasgow aircraft to Edinburgh, based on schedules for this summer, only 24% of Ryanair’s based aircraft flying from Glasgow will be transferred to Edinburgh, with the rest being made up of new routes. With the base closure at Glasgow, routes to Bydgoszcz, Chania, Frankfurt, Madrid and Palanga will no longer be served by Ryanair from Scotland, although the carrier does link Edinburgh to Frankfurt Hahn. 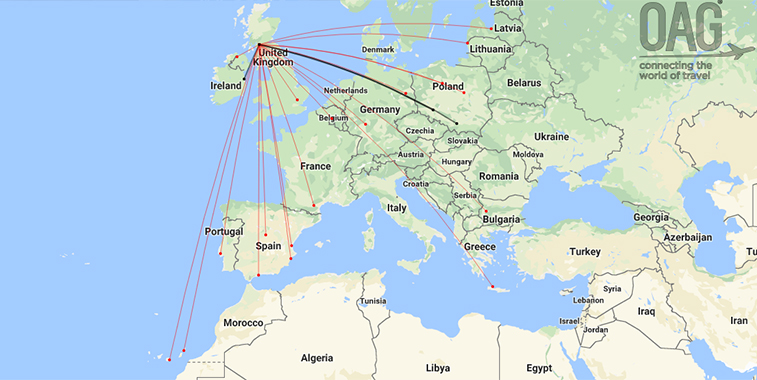 Glasgow’s S18 route map versus W18/19. As a result of Ryanair’s cutbacks, it is scaling back its operation into Scotland’s second busiest airport from 22 routes in summer to just three this winter, namely Dublin, Krakow and Wroclaw (highlighted in black). Currently Ryanair offers 1.52 million seats per year from Glasgow.