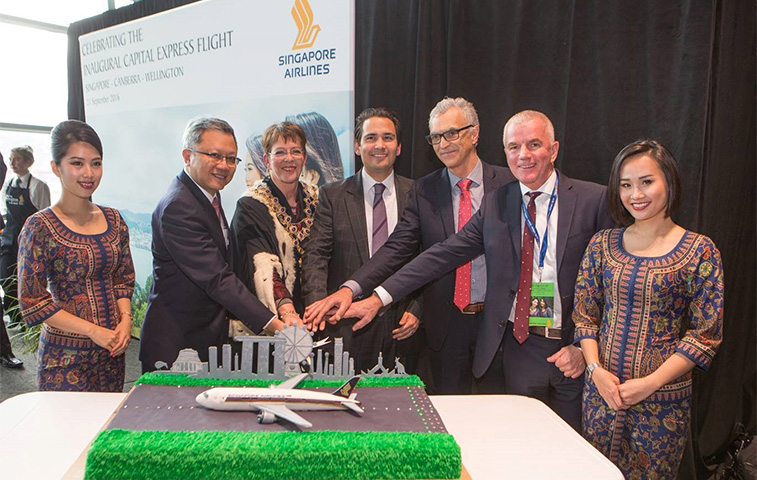 In September 2016 Wellington Airport celebrated the arrival of Singapore Airlines and its new Capital Express service linking the New Zealand capital to Singapore via Canberra in Australia. In May 2018 the airline will amend this operation, dropping the connection between Canberra and Wellington. It will continue to serve both capital cities from Singapore but Wellington flights will operate via Melbourne instead.

Wellington is the third largest airport in New Zealand. In 2017 it handled 6.1 million passengers, placing it behind Christchurch on 6.7 million and the country’s main hub Auckland, which welcomed 19.6 million passengers last year. Although it serves New Zealand’s capital city, Wellington faces a disadvantage compared to the two larger airports in that its runway is considerably shorter. Auckland has a 3,635 metre-long runway while Christchurch has a 3,288 metre strip, along with a shorter additional runway. In contrast, Wellington’s only runway is currently 2,081 metres in length, restricting its ability to handle larger wide-body types or longer-haul routes.

Since calendar year data for Wellington only goes back to 2014, we have used financial year (FY) figures to chart the airport’s passenger growth going back 10 years. In the below graph, each FY relates to the 12 months ending 31 March, as per the airport’s annual reports, so FY 2009 covers the year to 31 March 2009 and so on. The figure for FY18 is based on a combination of published passenger figures for April to December 2017 and a conservative anna.aero forecast for January to March 2018, which assumes a similar growth rate for the first three months of the year as that experienced over the same period last year. Wellington witnessed a 19% increase in passenger numbers from FY09 to FY17. Our forecast for FY18 suggests the airport is likely to reach at least 6.12 million passengers over the 12 month period to 31 March this year, representing a 2.5% increase over FY17. This would mean that Wellington will have enjoyed eight years of back to back growth, based on the financial reporting periods. 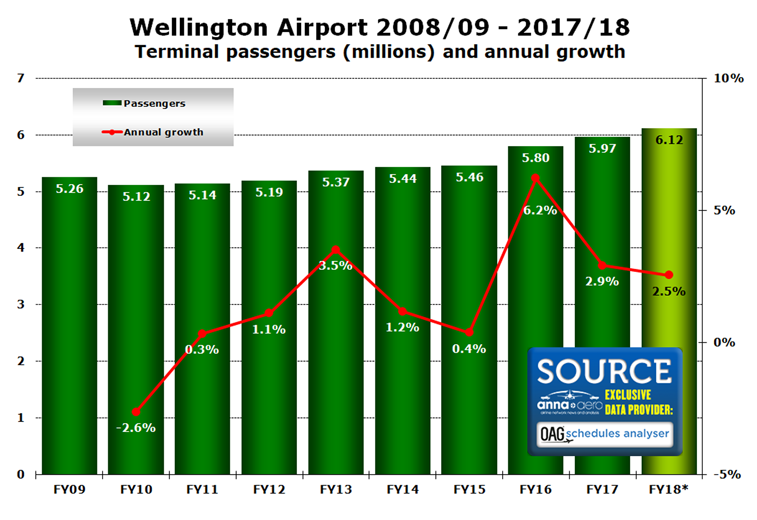 Domestic traffic dominates Wellington’s network, although international passengers have seen larger percentage growth in recent times. In FY08 domestic travellers accounted for 88% of all terminal throughput and this had only fallen marginally to 85% by FY17. From FY08 to FY17 domestic passengers increased from 4.4 million to 5.1 million, a growth rate of 15%. Over the same period international traffic grew from 600,000 to 890,000 passengers, an increase of 47%.

Eight airlines offered scheduled services from Wellington in 2017, including three New Zealand-based carriers, three from Australia and one each from Fiji and Singapore. Air New Zealand is the dominant carrier at the airport, having provided 73% of the published departing seats last year. The carrier served 18 routes from the country’s capital city in 2017, including 15 domestic destinations. About 41% of Air New Zealand’s published capacity from Wellington was operated by Air Nelson or Mount Cook Airlines under the Air New Zealand Link brand. All of these Air New Zealand Link services were operated on domestic connections. In addition to home-based carriers and Australian operators, Wellington is also served by Fiji Airways and Singapore Airlines. The former offers flights to Nadi, while the latter operates its Capital Express connection, linking Wellington to Singapore via Canberra in Australia. The Capital Express route began operating in September 2016, but the airline is due to re-jig the link between its home market and the New Zealand capital in S18. From 3 May flights will operate four times per week via Melbourne in both directions, rather than through the Australian capital. 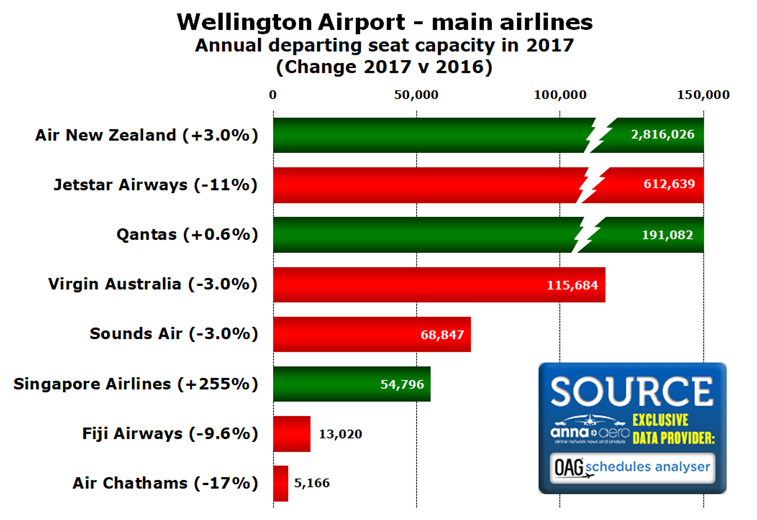 Three of the eight airlines serving Wellington increased their capacity from the airport in 2017. The largest increase came from Singapore Airlines, but the extent of this growth is due to the fact that 2017 was its first full year of operation from Wellington, having only commenced its Capital Express service in the previous September. Five carriers (highlighted in red) cut capacity with the largest reductions coming from Air Chathams and Jetstar Airways.

New Zealand’s two largest airports top the destination chart from Wellington. In 2017 the combined capacity on services to Auckland and Christchurch accounted for 56% of Wellington’s departing seats. OAG schedules show that 179 flights will operate from Wellington to Auckland during the week commencing 6 March with 138 provided by Air New Zealand and the remainder by Jetstar Airways. In total, nine of the top 12 destinations were domestic links. Sydney was the largest international destination based on departing seats. Three international routes made the top 12 with all of them serving destinations in Australia. The only international country markets served direct from Wellington in 2017 were Australia and Fiji. Singapore isn’t included as services operate via Australia. 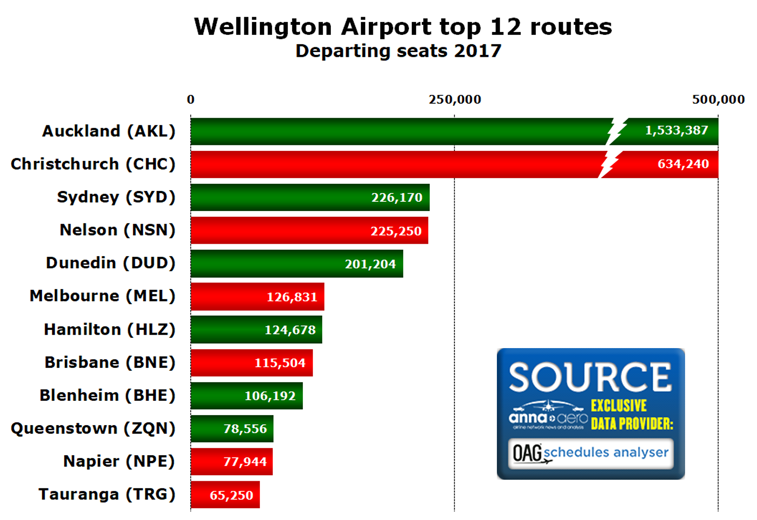 Half of the top 12 destinations witnessed an increase in capacity from Wellington in 2017, while the other six (highlighted in red) experienced a cut in seat numbers. The largest increases came on domestic links to Blenheim and Queenstown which saw 16% and 13% jumps in capacity, with Air New Zealand increasing seat numbers on both sectors. The largest cull came on services to Melbourne, with capacity falling by 21% after Jetstar Airways ended services on the airport pair after W16/17. This sector will receive a boost in 2018 when Singapore Airlines begins its service to Singapore via Melbourne.

Looking ahead to any future route development at Wellington, according to anna.aero’s New Route Database there is just one new service pending, with that being the recently announced Jetstar Airways service to Queenstown. Starting on 25 March, the LCC will fly the domestic sector three times weekly – on Tuesdays, Thursdays and Saturdays – on its A320 fleet. 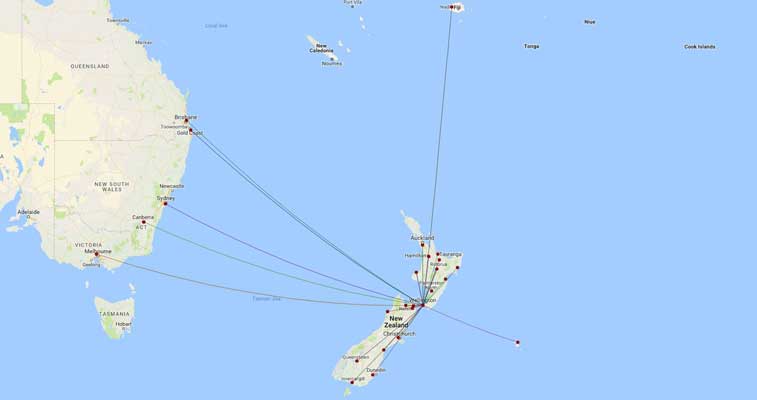 The route map from Wellington for the week commencing 6 March shows the high concentration of domestic links the airport offers. In FY17, 85% of all departing seats were flown on domestic services, with Auckland and Christchurch the leading destinations on the departures board. The only international markets served with direct flights from Wellington are Australia and Fiji.